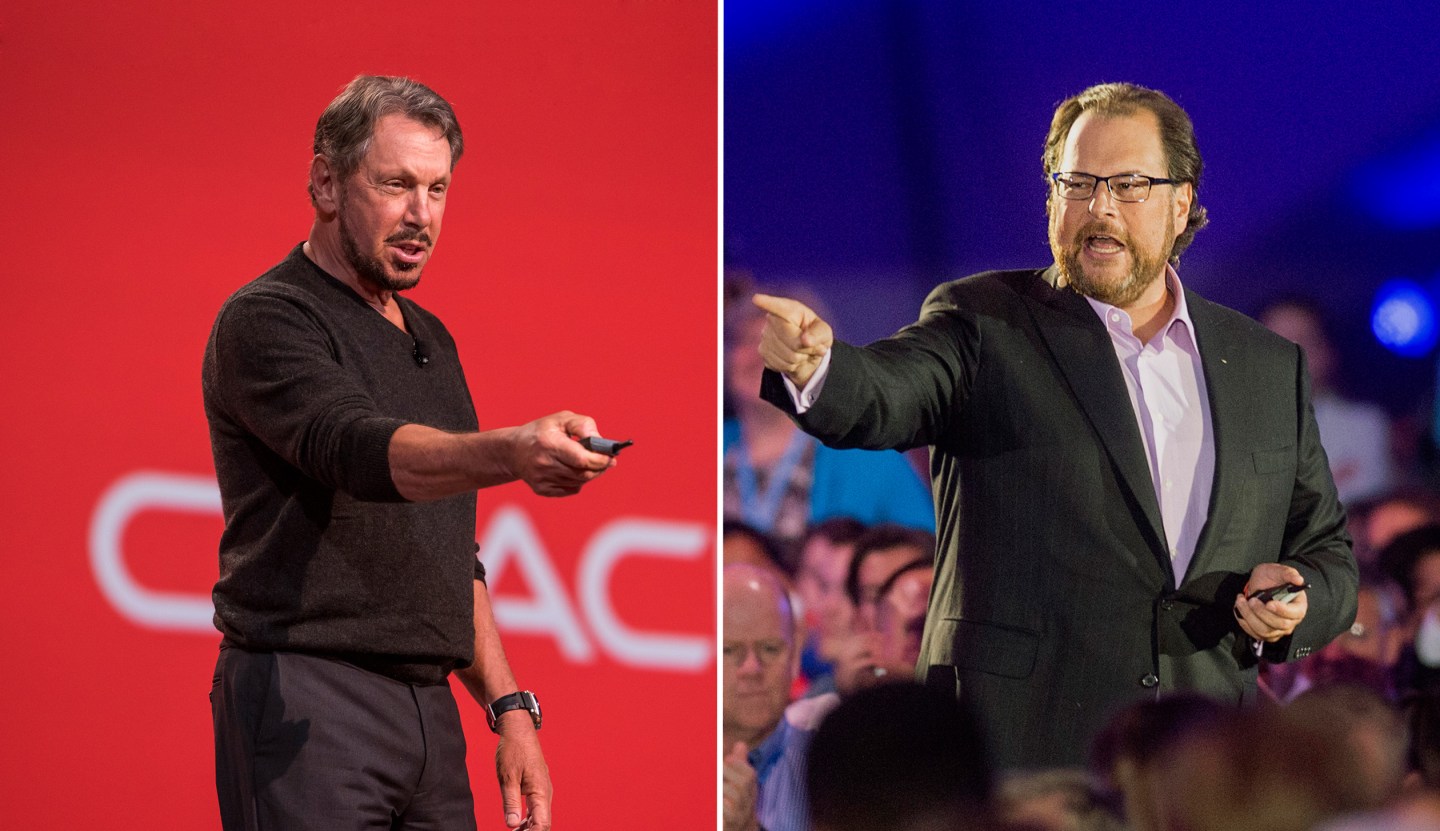 Oracle co-founder Larry Ellison continued his years of sparring with rival Salesforce CEO Marc Benioff by claiming that Oracle is likely on a faster trajectory when its comes to delivering software over the Internet.

Oracle, Ellison said, will likely beat Salesforce.com, in delivering $10 billion in annual revenue in this category. That would be a big deal because Oracle came to this software delivery model considerably later than Salesforce.

“Our cloud applications goal is to be the world’s largest and most profitable SaaS company,” Ellison said on Oracle’s second quarter earnings call on Thursday. “We are growing our cloud business much faster than Salesforce.com and we can beat them to the $10 billion mark, but it’s going to be close.” SaaS, or software as a service, is a tech term for software delivered over the Internet to customers.

Maybe, but last month, Benioff seemed to indicate that Salesforce had already blown by the $10 billion goal, at least in his own mind. On Salesforce’s latest quarterly earnings call in November, Benioff said he the company was “well on the path to reach $20 billion faster than any other enterprise software company.” (Emphasis is mine.)

Regardless of who beats whom, this would be an important symbolic victory. Oracle, like Microsoft (MSFT), IBM (IBM), SAP (SAP) and other older software powers, is moving away from the older model of selling big licenses for software that runs on the customer’s own computers.

Customers have voted with their wallets and have shifted to buying software subscriptions—from Salesforce.com, which pioneered this model starting in 1998. Almost every other major business software company founded in the past decade like Workday (WDAY), Zendesk, and Okta deliver their software online.

In this world, the software provider handles the hardware updates, security fixes, software patches, and upgrades at its own data centers—freeing the customer from that worry. Customers typically pay per user and per month, although they also usually pay upfront for a one-year or three-year term. In that way Internet-delivered software isn’t all that different from the old model.

Benioff kicked off this whole $10-billion-dollar-brag-fest last year with a statement that he wanted Salesforce to be the software company to hit the $10 billion mark faster than any company in history, including those before the SaaS era. Ellison apparently considered that a personal challenge by Benioff, who was once one of his top lieutenants at Oracle. And he pledged to beat Salesforce at its own game.

Now we just have to see how it all plays out.