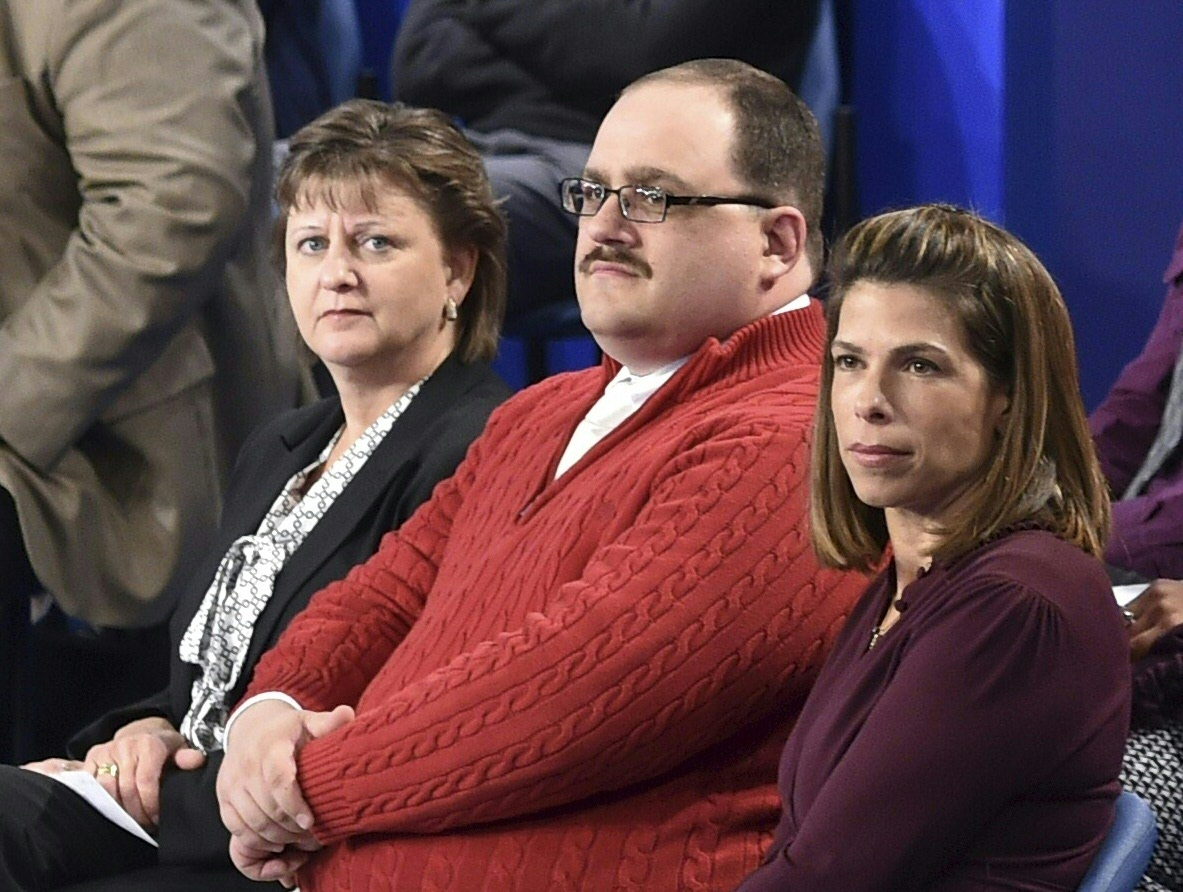 (FILES) In this file photo dated October 9, 2016 Ken Bone (C) listens to US Democratic nominee Hillary Clinton and Republican nominee Donald Trump during the second presidential debate at Washington University in St. Louis, Missouri. As the mud flew at Donald Trump and Hillary Clinton's second presidential debate Sunday, the American everyman became an instant celebrity by calmly asking a question about energy policy. Bone -- even his sturdy name has been a source of amusement on social media -- had been picked to represent undecided voters at the town hall-style debate in St Louis, Missouri. His heft, poise and polite manner offered a brief but refreshing respite from the 90-minute slug-fest between the Republican and Democratic candidates. / AFP / POOL / Paul J. Richards / TO GO WITH AFP STORY "Ken Bone, everyman hero in a tawdry US campaign" (Photo credit should read PAUL J. RICHARDS/AFP/Getty Images)
Photo by Paul J. Richards—AFP/Getty Images

Apparel brand Izod is piggybacking off the 15 minutes of fame that is currently shining on Internet sensation Kenneth Bone.

Izod, which is owned by apparel giant PVH Corp., on Thursday announced in a video that it would work with Bone to “encourage people to vote and be heard in the 2016 presidential election.” The pact was unveiled a day after candidates Hillary Clinton and Donald Trump met for their third and final debate in Las Vegas.

“I don’t think I am going to be Internet famous forever—that’s not my expectation,” Bone says in the two-minute spot, which Izod titled “Ken Bone’s Fifteenth Minute.” The uplifting ad can be seen below:

There’s been a booming business swirling around Bone ever since he simply asked a question about energy during the second Clinton-Trump debate earlier this month. What followed is almost inexplicable: Internet users began praising Bone as a man of the people.

Sales of his red Izod sweater (which he wears in the commercial) sold out quickly. Someone wisely marketed a “sexy” Ken Bone costume in time for the upcoming Halloween holiday. And of course, a backlash against Bone ensued.

Of all the brands looking to market around the Bone phenomenon, Izod likely makes the most sense. He was, after all, wearing the apparel brand’s sweater in the moment when he found fame. Izod doesn’t typically partner with Internet celebrities—endorsements have been focused on the golf world with representation by PGA golfer Webb Simpson and pro golfer Cameron Wilson.

For PVH—whose brands also include Calvin Klein and Tommy Hilfiger—any sales and marketing jolt will likely be very short lived (as is alluded in the ad). Internet memes rarely are sustainable. Remember the “Damn Daniel” meme from earlier this year? Like Daniel, Ken Bone will soon be fondly remember as a very, very brief moment in pop culture lore.