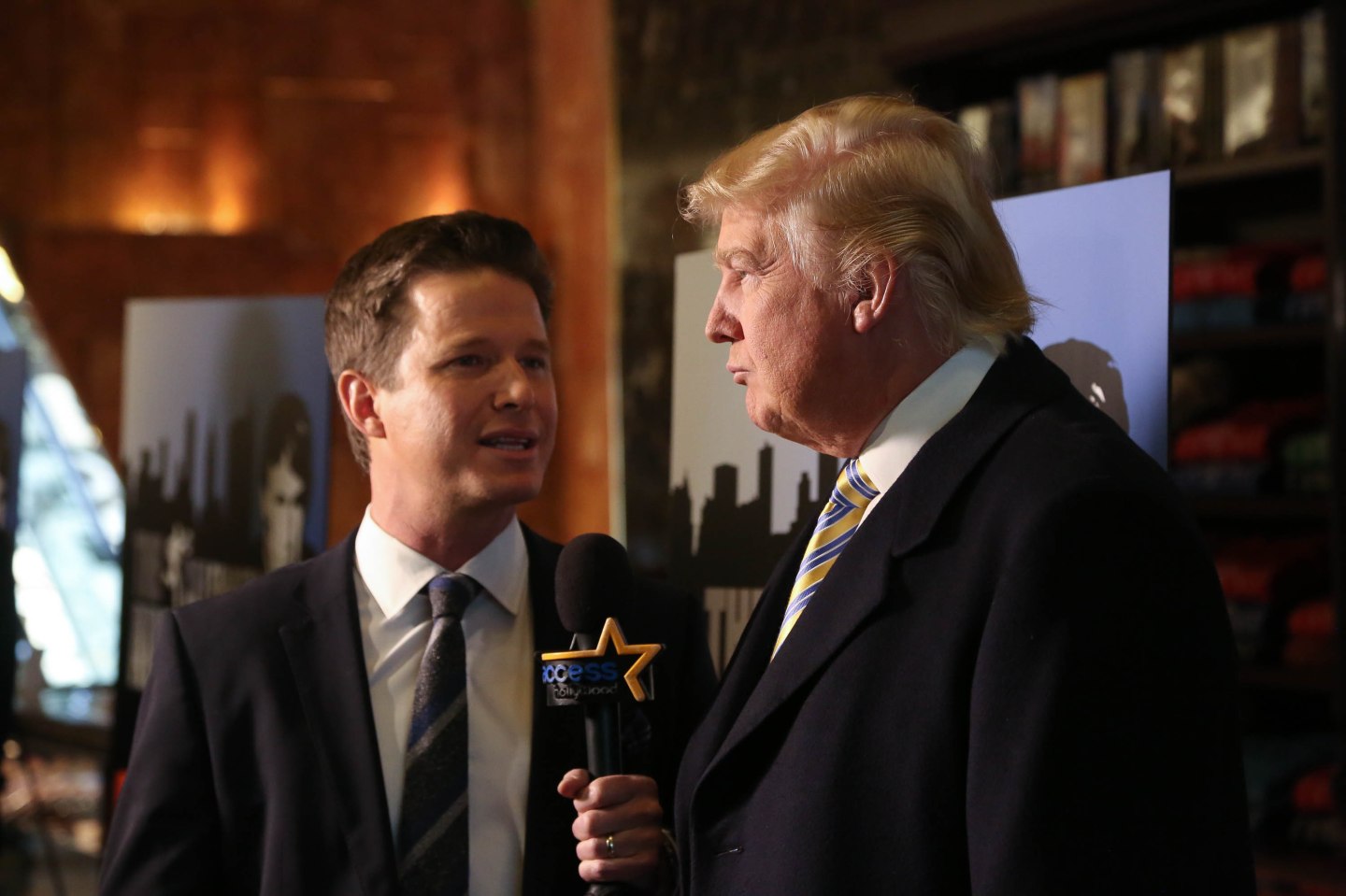 Sacked, tossed, let go, pushed out, resigned, fired. No matter the euphemism, the storyline is the same: An executive, formerly heralded as a company rock star, leaves on less than stellar terms and floats away on a golden parachute worth multi-millions of dollars.

Most recently, NBC is in the process of firing TV host Billy Bush, according to the New York Times. Before him (and also connected to the Trump boys’ club) was Fox News head Roger Ailes, who walked away from his job in July as chairman and chief executive of Fox News with $40 million amid allegations of sexual harassment. (Ailes didn’t walk far—he reportedly stayed on in a consulting role to Rupert Murdoch.)

Another high-profile CEO who could be headed for a soft landing: Yahoo’s Marissa Mayer, who could be out once the Verizon takeover of her company is complete. Mayer came on board in 2012, in hopes she would restore the tech behemoth to its former glory .By all accounts her tenure was a failure, yet Mayer stands to walk away with close to $220 million between her total compensation and severance. (She says she’s hasn’t looked at her severance package.)

While it may be hard to stomach what seems like a reward for bad behavior, in the case of Bush or Ailes, or subpar performance, in the case of Mayer, severance packages are usually negotiated as part of a CEO’s hiring contract and have little to do with the eventual outcome. According to a new report from MSCI, “Are CEOs Paid for Performance?” higher executive compensation—including a severance package—is not directly tied to better performance.

Severance packages are typically negotiated as part of a CEO’s hiring contract, says report co-author Ric Marshall, a senior corporate governance researcher at MSCI. “When a company undergoes a change in control, you can see large [compensation] numbers that aren’t tied to anything more than what’s been negotiated,” he says. “You see situations where it’s hard to understand how they arrived at that figure.”

That may be because the board members who approved such large payouts themselves didn’t understand the terms. Research out of Dartmouth and the University of Chicago found that company’s boards don’t actually know the value of the compensation they’re providing executives, largely because they don’t account for how valuable stock options can be.

As MONEY’s Brad Tuttle has noted:

“Companies are inclined to be on board with contracts awarding generous severance packages for several reasons. Theoretically at least, it allows them to convince executives to take jobs at lower annual salaries. Again, theoretically, a CEO with a terrific payout package won’t be scared about losing his or her job, and therefore will feel emboldened to make moves to improve the company even if they are unpopular.”

If you’re jealous your exit package isn’t nearly as generous, temper that with schadenfreude: There are a few CEOs who didn’t walk away with small fortunes. Here are some of the most notorious recent cases of CEO severance (or lack thereof).

Ron Johnson came into JC Penney (JCP) from Apple (AAPL) in 2011 like a bull in a china shop. He installed his own team, replacing executives and employees, and declared a new vision for “JCP,” according to a 2014 Fortune report. But that vision fell far short of expectations—the stock declined by 50% during his tenure.

Ultimately, Johnson was pushed out by the company’s board after just 17 months, and left without severance. He did, however, receive $658,921 in salary and other compensation for the portion of the year he worked before leaving.

Earlier this year, LendingClub founder and CEO Renaud Laplanche resigned after failing to disclose his personal investment in one of his company’s customers, and then suggesting that LendingClub itself invest in that company.

Laplanche had been with the company from its inception in 2006 until May 2016.

Chief executive of social media platform Twitter from 2010 to 2015, Costolo rose to head honcho after Jack Dorsey himself was fired as CEO, only to be replaced by Dorsey when he stepped down. In between all of that was the less prominent Evan Williams, who Costolo replaced in 2010. (Still with me?)

Under Costolo’s leadership, the company’s revenue stagnated and its stock price fell 14% from the time of its initial public offering to the time Costolo left. Fanning the flames were Wall Street investors, many of whom called for Costolo’s resignation.

Once Costolo resigned, he also forfeited any severance pay he would have received had he been fired or had there been a “change in ownership”—a forfeiture of around $3 million or $25 million, respectively.

Instead, Costolo walked away with nothing—that is, if you consider 8 million stock options and shares worth hundreds of millions “nothing.”

The founder of American Apparel (APP) was fired for cause in 2014, following a company investigation of allegations of sexual harassment and other misconduct on the part of the retail executive. Being fired for cause effectively means you’ve breached your contract and forgo any severance package to which you might be entitled under other circumstances.

Charney, who subsequently tried to buy back the company, filed an arbitration petition seeking up to $35 million in damages, including “nearly $6 million in severance and $1.3 million for unpaid vacation days,” according to a letter sent to American Apparel’s law firm by Charney’s attorney, who also gave a copy to the Los Angeles Times. Charney also unsuccessfully tried to sue his former employer for defamation.

Fast-forward to 2016: The company is reorganized under new management, after filing for Chapter 11 bankruptcy protection in late 2015, and Charney—whose ownership stake was effectively wiped out in the bankruptcy—is reportedly launching a new clothing company.

Millennials may know Carly Fiorina for her failed 2016 presidential bid, but long before that, the businesswoman-turned-political-hopeful was chief executive at Hewlett Packard (1999 to 2005).

Though Fiorina often referenced her business acumen on the stump, her record is hotly contested. She led the merger with Compaq, widely regarded as a failure during Fiorina’s tenure, though she helped keep HP (HPQ) afloat amid the larger dot-com bubble.

According to a 2005 report, “executives said Fiorina was not terminated for cause and that she would receive severance pay — and a company spokesman said she’ll get a payout of approximately $21 million, including stock options.”

Not too shabby for someone at the helm while the company’s stock price declined by 60%.

Freston rose quickly from co-COO and co-president of Viacom in 2004 to CEO in January 2006, only to be fired by Viacom (VIAB) chairman Sumner Redstone nine months later.

Freston was reportedly dismissed for failing to snap up MySpace, according to The Guardian, but he didn’t leave without his $80 million severance package, which included a deferred compensation payout and pension plan, consulting fees, and a valuable life insurance policy.

Viacom may have cut ties with Freston, but it’s not cutting any costs when it comes to other out-the-door execs. In June, it was reported that two other Viacom execs could qualify for a combined $146 million buyout package.

O’Neal served as the CEO of Merrill Lynch from 2002 to 2007, until he was caught up in a little thing called the mortgage crisis and consequently resigned. Merrill misled investors about the bank’s exposure to collateralized debt obligations, or CDOs, that helped topple the U.S. mortgage market in 2008, though O’Neal, like so many others involved in the banking collapse, faced no criminal charges.

Once O’Neal officially submitted his resignation to Merrill Lynch (now part of Bank of America) he walked away with a “retirement” compensation package valued at $161.5 million.

Bob Nardelli’s tale is one of a long, storied corporate career, ranging from time at GE to Home Depot to Coca-Cola (KO) and Chrysler.

Nardelli departed GE (GE) after losing a three-man race to succeed then-CEO Jack Welch. Within two weeks he’d landed a job as the CEO Home Depot (HD), despite having no retail experience. Though the home improvement company’s profits increased during his tenure, by 2007 Nardelli was no longer “the right guy for the job,” according to one investor. Nonetheless, he walked away with $210 million in severance—emblematic, some critics said, of his generous compensation package relative to the stock’s performance.

To be fair, Whitacre’s “severance” package is really a retirement package—but it’s worth including on this list as it was one of the top two largest packages ever awarded to a departing company executive.

As CEO of Southwestern Bell, Whitacre led the company’s acquisition of AT&T (T) in 2005 (the merged entity took the ATT name). Two years later, he walked away with a retirement package of $158 million, including “$24,000 in annual automobile benefits, $6,500 each year for ‘home security,’ access to AT&Ts corporate jet for 10 hours a month and $25,000 to cover his country-club fees,” according to CNNMoney.

A GMI report from 2012 estimated that Whitacre’s payout was slightly higher than his SEC listed retirement package. Factoring in things like salary, stock, deferred compensation, and benefits, GMI estimated Whitacre’s golden parachute at a cool $230 million.

And instead of “retiring,” Whitacre went on to lead a post-recession General Motors teetering on the brink of disaster.

Somehow, getting busted for “backdating” stock options means walking away with hundreds of millions of dollars, as was the case for former UnitedHealth (UNH) CEO Bill McGuire.

During his tenure at the company, McGuire received $1.6 billion in stock options. The SEC subsequently alleged that McGuire backdated the options to coincide with days when the company’s stock hit historic lows. After stepping down, McGuire agreed to a $468 million settlement with the SEC (without admitting or denying the charges), plus reimbursements to the company for any equity earnings he received from 2003 to 2006, for a total of around $600 million. Without getting into the wonky accounting of it all, the SEC’s charges alleged that McGuire knowingly “caused the company to understate compensation expenses for stock options,” not to mention creating the opportunity for large profits for himself.

Still, that left McGuire with more than $800 million in options.