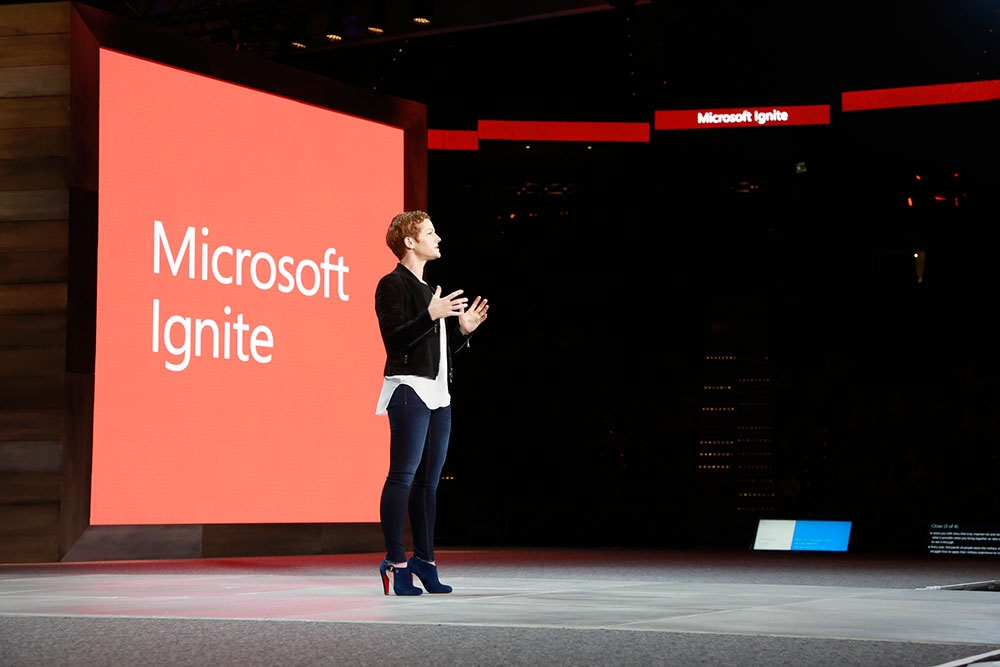 Microsoft is again arguing that it offers the best way to let companies put some of their data and software up on a shared public cloud infrastructure while keeping other data completely under their own control.

As detailed at the tech giant’s Ignite conference for IT professionals in Atlanta this week, that mix of shared and private technology is what has been dubbed by technophiles as the hybrid cloud. This particular cloud model is a critical selling point, and perhaps even the critical selling point—of Microsoft’s business strategy going forward.

The public cloud part of the company’s hybrid pitch is Microsoft Azure, which runs on 34 sets of data centers worldwide. The private, or in-house, part is trickier. Currently, Microsoft asserts that companies running the latest versions of its Windows Server and associated software on their own servers can have a hybrid cloud-like system set up now.

But what they really need to assure easy management of on-premises and public cloud IT is what Microsoft calls Azure Stack, which, as of this week, is in its second test release.

The finished Azure Stack software is now expected out in the middle of next year, instead of this year as originally promised. It will also be delivered on a limited set of servers from Dell, Lenovo, and Hewlett-Packard Enterprise (HPE)—another change from the original plan, which was to let customers run it on whatever Intel (INTC) server they wanted to use.

Those quibbles are not the first bumps in the road to hybrid cloud for Microsoft. Six years ago, the company touted Azure Pack, which was basically a plan to work with Dell, eBay (EBAY), and HP (HPQ) on Azure hardware appliances that could run in customers’ data centers. That effort was pretty much dead on arrival.

When asked why the world should expect Microsoft to do better this time out, Julia White, the corporate vice president of Microsoft (MSFT) Cloud Platform, cites a few reasons.

First, in the past, White says Microsoft had focused on extending Windows Server out to connect to the outside cloud. However, now Azure Stack is cut from the same “Azure Fabric” that runs in Microsoft Azure public cloud.

“The earlier concept was more about extending on-premises servers to do cloud things, while now it’s the opposite,” White tells Fortune.

She also notes that the decision to tie Azure Stack—at least for now—to a few key servers from known hardware partners was based on customer feedback. These customers, she explains, “want a simple cloud model and to make sure that Azure Stack services stay on par with Azure public cloud services.”

For more, read: Here’s One Thing Amazon Must Do to Keep Its Cloud Mojo Going Strong

So why should customers stick with Microsoft’s hybrid cloud when VMware (VMW), HPE, and even IBM (IBM) are preaching their own hybrid solutions?

“We have 34 global regions for Azure. This is a massive hyperscale public cloud, and that is very different than a private cloud that HPE or VMware might talk about,” she says.

Hyperscale typically refers to data center infrastructure that yokes together hundreds of thousands or even millions of servers, along with equally humongous amounts of storage and networking to accommodate lots of paying customers. Typically the only three cloud providers considered to be part of that rarefied hyperscale club are Microsoft, Amazon Web Services (AMZN), and Google (GOOG). A select few consumer companies, including Facebook (FB), are also in that select club.

The subtext in this cloud conversation is that Microsoft must contend with Amazon, the leader in the public cloud arena. AWS, which has been around for 10 years, has an enviable customer list that includes some very big companies, but its ability to work inside its customers data centers is minimal. Its services are predicated on the belief that big businesses will want to put more and more of their digital stuff in AWS. The notion that companies might want to keep some of their own data centers seems to have occurred relatively recently to AWS execs.

But you’d have to be naive to think that AWS—acutely sensitive to any competitive threat—isn’t thinking about ways to facilitate hybrid cloud going forward. It has long offered a storage gateway, which is basically an appliance that sits on site at a customer’s data center to collect data and send it to AWS. Now, it seems likely that AWS might extend that product or add new services to help customers keep some data private. Google, which is making a run at AWS and Microsoft with its Google Cloud Platform, also has to address the hybrid cloud issue.

Amazon and Google will have to reach into corporate data centers, where they have negligible presence—just as Microsoft has had to gear up Azure as a rival to AWS while protecting its massive base of customers running Windows Server and other software internally. If all that data and software gets sucked up into AWS—or even into Azure for that matter—it’s not a good thing for Microsoft. All of that Microsoft software that runs on premises has long been a cash cow for Microsoft. The economics of moving all of that to the public cloud, where software tends to be cheaper, would be disruptive.

As Constellation Research principal analyst Holger Mueller put it: Microsoft absolutely has to succeed at hybrid cloud this time out, stipulating “otherwise it may bleed too much cloud revenue to the pure play cloud vendors or to other hybrid vendors like IBM and Oracle.”