Microsoft CEO Satya Nadella Has Much To Say About Artificial Intelligence 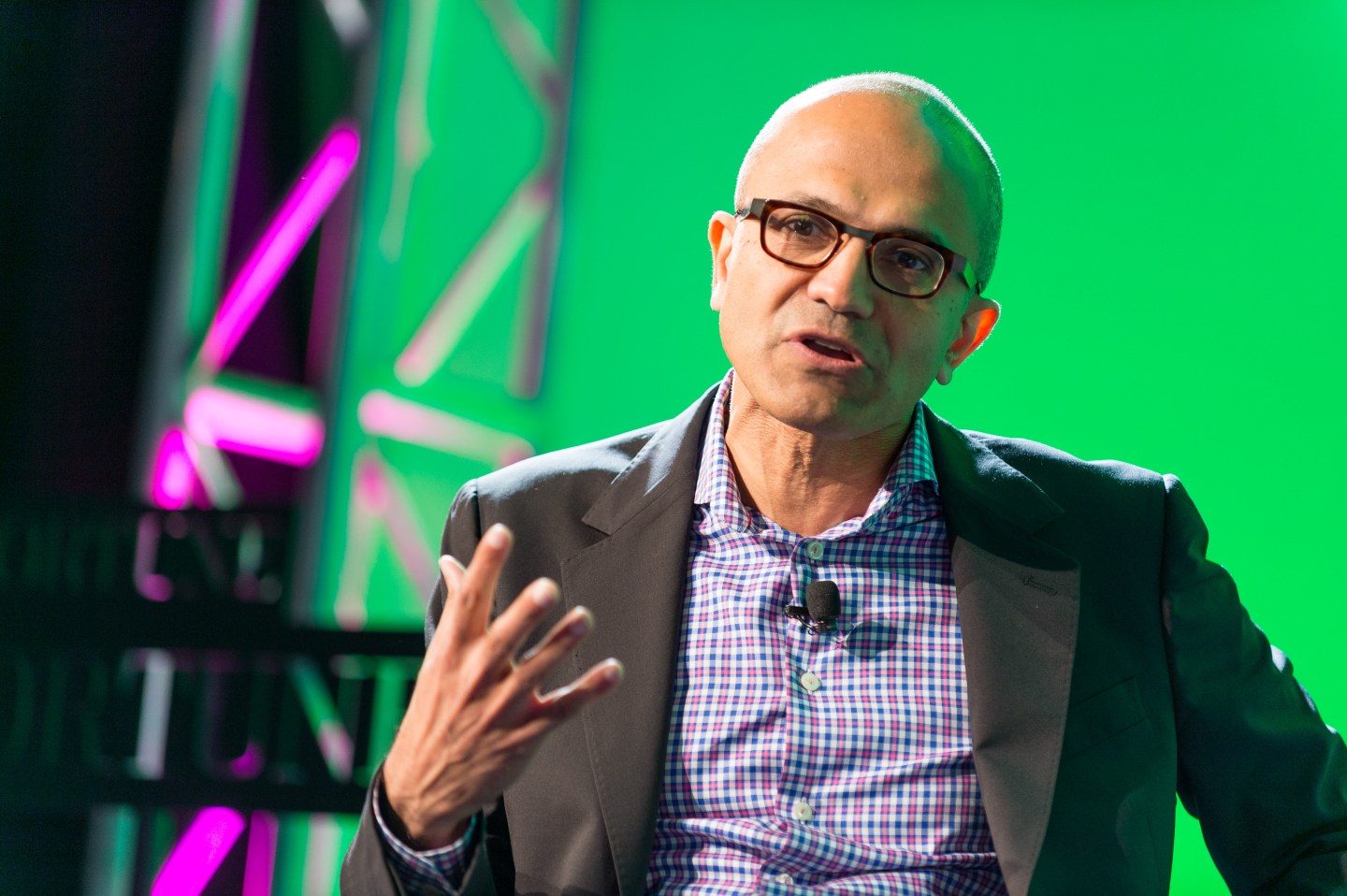 Microsoft wants the world to know it’s not falling behind in the race for artificial intelligence.

The technology giant—like Google (GOOG), Facebook (FB), and IBM (IBM)—has been pushing into the trendy field of artificial intelligence, catch-all for various technologies that help computers recognize patterns from massive amounts of data.

Microsoft CEO Satya Nadella emphasized A.I. on Monday at the company’s annual IT conference in Atlanta by describing how his company is using the technology and how it plans to do so a lot more in future.

“We are not pursuing A.I. to beat humans at games,” said Nadella, taking a subtle hit at competitors like Google and IBM, whose A.I. technologies got some attention for beating humans at the ancient Chinese board game Go and on the game show Jeopardy.

Microsoft’s overarching goal is to “democratize A.I.,” which Nadella explained has something to do with analyzing the mountains of data produced by consumers and businesses and then presenting the findings to people who have far less free time than they used to have.

Microsoft’s “A.I. approach” consists of four “core pillars” that Nadella said are agents, applications, services, and infrastructure. Not coincidentally, a Microsoft service underpins each one of those pillars.

Microsoft’s agent is digital assistant Cortana, which Nadella described as a “new organizing layer” that sits “across all the applications you will use in your life.” He mentioned Microsoft’s Office work productivity and Dynamics software for salespeople as being two examples of applications Microsoft has imbued with better data crunching technology.

Nadella bragged that Microsoft’s Dynamics sales software is able to sift through third-party apps like LinkedIn (which Microsoft is acquiring for $26.2 billion) to pinpoint whether changes made on those services, like employees changing job titles, could be a sign of better sales leads. Microsoft competitor Salesforce, whose CEO, Marc Benioff, said lost out to Microsoft on a bid for LinkedIn and its employee data reservoir, is also gearing to soon debut its new “Salesforce Einstein” A.I. technology for its own sales software and related products.

Nadella also cited Microsoft’s recent work with the National Football League to build a fantasy football app that uses a chat-like interface so that people can more intuitively make online trades of sports stars and follow their favorite teams. He brought former football and baseball star Deion Sanders on the stage to show off a demo of the new football app, which Nadella said he hopes to have ready by the next football season.

“Forget the Super Bowl or World Series, I’ve made it!” Sanders said enthusiastically to the crowd of I.T. professionals.

As for services, Nadella said that A.I. has opened up some of the technology that powers Cortana to outside developers to use to build their own apps on. It’s a similar strategy to companies like Google and Facebook, which have released A.I. software development tools for free to popularize their technologies and attract talent.

Nadella then talked about Microsoft’s Azure cloud computing service and reiterated an announcement earlier in the day that the company is using new custom computer chips to help crunch information faster and to better manage networking traffic in data centers.

All of the products and services Nadella discussed have been affected in some way by the rise of a type of A.I. technique called deep learning.

With deep learning, organizations can feed enormous quantities of data into so-called neural nets designed to loosely mimic the way the human brain understands information. It’s a hot topic that companies like Facebook and Google have all been pouring millions of dollars into to improve their services’ image-recognition and speech translation, among other things.

All of these technology giants have been bragging that their A.I. technologies are superior to their competitors. Companies like Microsoft, Google, Facebook, and Chinese search giant Baidu have been furiously hiring A.I. researchers, leaving many technology analysts to question whether these companies may be hoarding talent and thus shaping current A.I. research to their own financial benefit.

Nadella’s positioning of Microsoft “democratizing A.I.” may sound more appealing to an apprehensive consumer worried that only a handful of companies are determining the overall direction of A.I. But Microsoft, like the rest of its competitors, stands to benefit if more companies build software using its A.I. technologies and use Microsoft’s Office and related services as well as Microsoft’s digital assistants.

In other words, Microsoft’s plan to democratize A.I. means that it wants to make it easier for people to use it’s own company’s products.