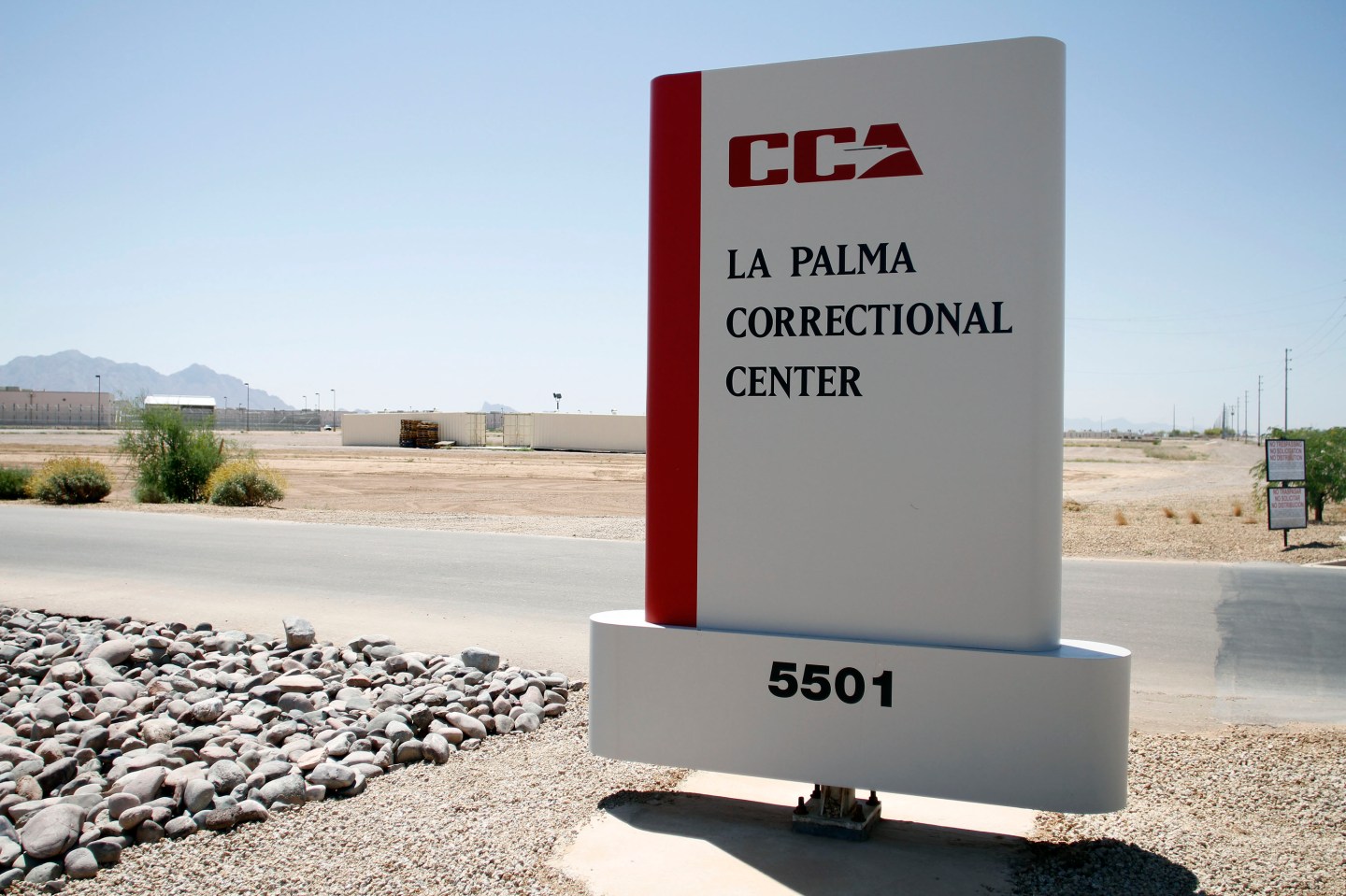 Signage stands outside the La Palma Correctional Center in Eloy, Arizona, U.S., on Tuesday, May 11, 2010. La Palma, which houses about 2,900 convicts from California, is one of 65 facilities operated by Corrections Corp. of America, the largest private-prison operator in the U.S. Photographer: Joshua Lott/Bloomberg via Getty Images
Joshua Lott — Bloomberg via Getty Images

The U.S. Department of Homeland Security will study whether to discontinue using privately run detention centers, which the Justice Department recently called unsafe, for migrants and shares of private prison operators fell on Monday after the news.

Department Secretary Jeh Johnson said he directed his advisory council to evaluate whether the agency should continue to contract with private prison operators and make a recommendation by Nov. 30. Advocates for immigrants have accused the companies of withholding proper mental health and medical care from detainees to boost profits.

Immigration and Customs Enforcement (ICE), a division of DHS, currently uses detention facilities run by Corrections Corp of America and The GEO Group.

Corrections Corp of America’s stock slid 9.4% and The GEO Group’s stock fell 6% immediately after news of the review. Both stocks were rebounding later in the afternoon.

Corrections Corp of America earned $689 million from ICE contracts since 2008, 12% of its revenue from state and federal contracts over that time, according to the website SmartProcure which tracks government contracts. The company currently manages a facility for Central American women and children in Dilley, Texas.

The GEO Group runs a similar facility in Karnes City, Texas and has earned $1.18 billion from contracts with ICE since 2008, about 35% of its total revenue from government contracts, according SmartProcure data.

The GEO Group said in a statement, “GEO’s facilities under contract with ICE are highly rated and provide high-quality, cost-effective services in safe, secure, and humane residential environments pursuant to strict contractual requirements and the federal government’s national standards,” the statement said.

Corrections Corp of America spokesman Steve Owen said, “We’re proud of the quality and value of the services we provide and look forward to sharing that information.”

Immigration advocates and members of Congress have ramped up pressure on DHS to end its contracts with the private prison companies since the Justice Department announced on Aug. 18 it would do so.

That was prompted by an inspector general’s report that criticized the safety and effectiveness of private prisons.

“Rather than wait for a review and a report from a committee, the president should ensure that the phase-out of private prisons … is extended to DHS operations immediately,” said Greg Chen, advocacy director at the American Immigration Lawyers Association.

See also: Deloitte Urges the UK Not to Shut Out Skilled Migrants After Brexit

Both companies also contract with state and local prison systems, which make up about half of their revenue.

A Reuters survey of 10 states with the largest contracts with private prison companies, including California and Texas, showed none had immediate plans to drop their contracts.