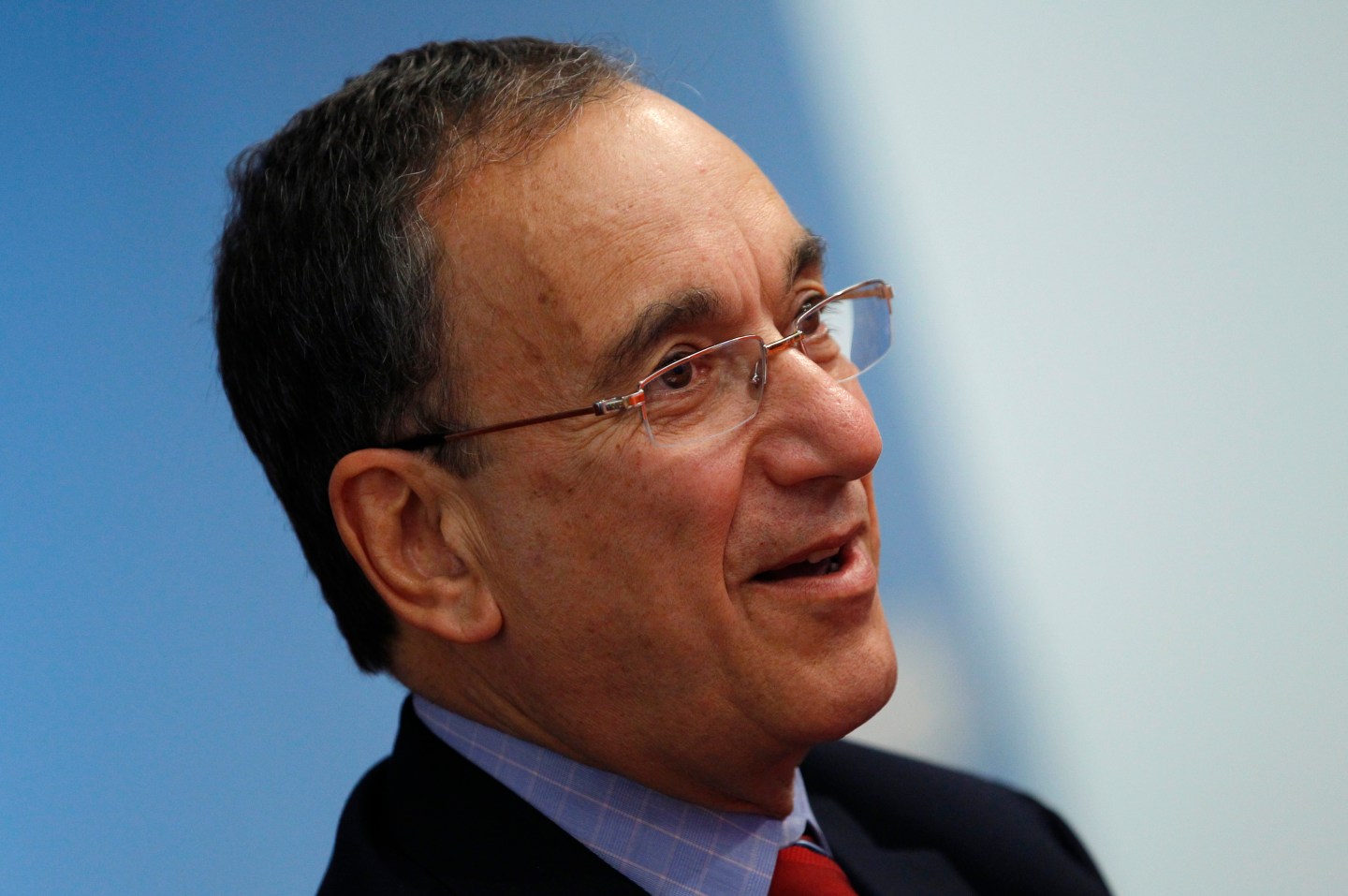 George Scangos, CEO of Biogen Inc. speaks during the Reuters Health Summit in New York, May 10, 2011. Scangos is uncomfortable in the well-appointed office he inherited when he took the top job last July. He is eager to bring greater flexibility and vitality to Biogen, which makes the multiple sclerosis drugs Avonex and Tysabri and is one of the world's biggest biotech companies. REUTERS/Mike Segar (UNITED STATES - Tags: HEALTH BUSINESS) - RTR2M816
Photograph by Mike Segar — Reuters

Biogen (BIIB) saw shares spike nearly 10% in Tuesday afternoon trading on rumors that rival pharma titans Allergan (AGN) and Merck (MRK) are interested in buying the biotech giant, in a deal that could be worth roughly $75 billion.

There have been preliminary and informal discussions between the parties, according to sources cited by the Wall Street Journal. If a deal were to happen it would create a monster biopharma company, adding to the recent deluge of consolidation efforts in the healthcare industry. Biogen’s market capitalization stood at $74 billion Tuesday afternoon, while Merck was at $162 billion and Allergan at $101 billion.

The timing of the rumored buyout interest isn’t coincidental. Biogen CEO George Scangos is stepping down from his role at the company in the coming months, and while Biogen’s stock has been on a huge upswing over the past six months, it’s still down 30% from its all-time peak in March 2015.

Biogen, Merck, and Allergan declined to comment to Fortune about the M&A speculation.

An acquisition would plug different holes in the respective companies’ pipelines. Biogen has taken a major bet on developing drugs for Alzheimer’s disease, axing 11% of its global workforce in 2015 to focus on developing treatments in that space, and is a big player in the multiple sclerosis drug market. Its blockbuster medication Tecfidera enjoyed a 5% boost in sales in the second quarter of 2016 compared to last year (although this is attributable to a combination of stronger volume and price hikes).

Allergan, whose proposed mega-merger with Pfizer (PFE) fell apart in the face of new Treasury rules meant to fight tax domicile-shifting inversion mergers, has shown a clear interest in the Alzheimer’s space. The firm struck a $3.3 billion licensing pact with the U.K.’s Heptares Therapeutics for its Alzheimer’s portfolio mere hours after the Pfizer deal imploded in April.

Some have called Biogen’s focus on Alzheimer’s drug development risky. The treatment space is notorious for initial promise giving way to future disappointments in clinical trials, and it’s still unclear whether the theory that targeting sticky amyloid plaque protein that develops in Alzheimer’s patients’ brains is the key to fighting the disease. But Biogen has stuck to its guns, even poaching former top Pfizer exec and chief scientific officer of its neuroscience unit Michael Ehlers to run Biogen’s R&D shop earlier this year.

Merck has also been on a restructuring quest in recent years under chief executive Ken Frazier. In July, the company said that it would be slashing certain research jobs to reinvest in top therapeutic bets like cancer immunotherapy, cardiovascular, and metabolic diseases, and treatments that could harness the power of the microorganisms which naturally live in the human body.

If Merck were to acquire Biogen, it could also significantly expand its global portfolio of biosimilars, or cheaper copies of expensive biologic drugs. Merck and Biogen both have joint ventures with South Korea’s Samsung Bioepis to develop and co-market biosimilars of some of the world’s best-selling drugs, including Sanofi’s flagship insulin Lantus and AbbVie’s (ABBV) top-seller for rheumatoid arthritis, Humira, in different regions.