A Look Back At 40 Years of Apple 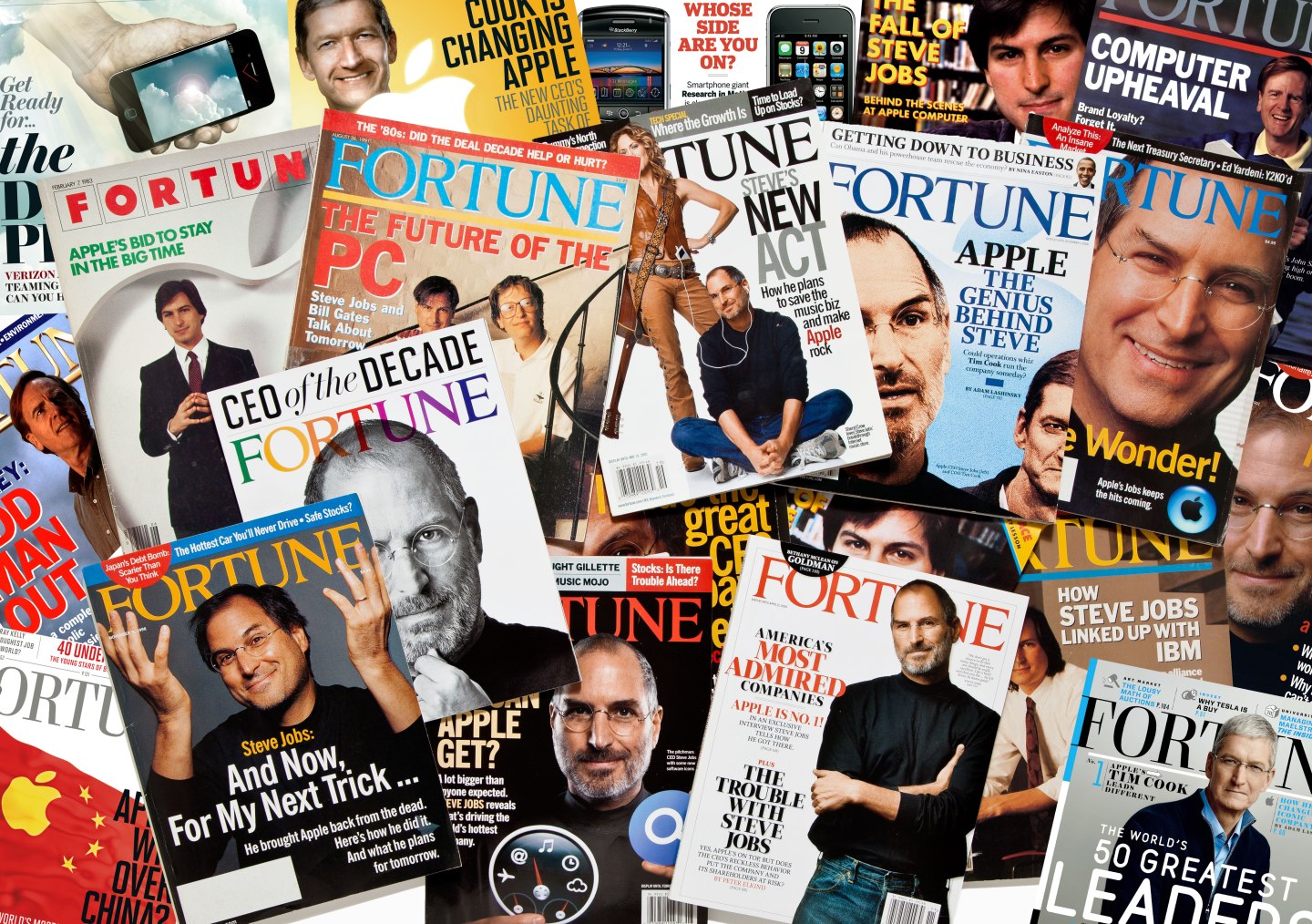 There were no fools sitting in that garage in California on April 1, 1976 when Apple was founded.

That day, technology legends Steve Jobs, Steve Wozniak, and Ronald Wayne co-founded Apple Computer (AAPL), a company that would eventually go on to become one of the most iconic and valuable brands in the world.

But who knew at the time?

In the spring of 1976, these three young men were simply working on a computer and a dream that maybe they could become the next big thing in the budding technology industry. They had hope, a passion for technology, and wanted to build a true personal computer that could deliver to the average consumer something that was better than what they already knew.

Wozniak was the inventor; Jobs the salesperson. In July 1976, Apple I, the company’s first computer, went on sale. It didn’t take long before things took off, and Apple I caught the attention of do-it-yourselfers. As sales started to rise, Apple Computer incorporated in 1977, officially growing from a hobby into a company.

While Apple I was soaring and Apple Computer becoming a well-known name in Silicon Valley, Wozniak was hard at work on Apple II. Like the Apple I before it, the Apple II was successful. Before long, Apple had a slew of employees and revenue soaring well over $100 million by 1980. Apple had become the quintessential Silicon Valley success story.

But as with any other company that grows so big so quickly, things started to change in Cupertino, California.

Jobs was forced to deal with competing ideas, and a schism broke out internally as Apple Computer worked on building a graphical, user interface-based computer. There were two teams: Apple Lisa and Macintosh. After disagreements, Jobs left the Lisa team to head up the Macintosh effort. Like many other times over the years, he won. In 1984, the Macintosh, the spiritual predecessor to the Macs as we know them today, launched to the public.

Although Macintosh launched to much fanfare and spawned the iconic “1984” commercial, trouble was afoot. Macintosh sales were not as strong as some had hoped and by 1985, Jobs was at odds with CEO John Sculley—a person he hired to manage the company he co-founded. Ultimately, the board chose Sculley over Jobs, and the Apple co-founder was gone.

The ensuing years were troubling for Apple. Under Sculley’s leadership, Apple had difficulty finding its footing against increasing competition from other computer makers, notably Microsoft (MSFT). Sculley and his team tried to fix the issues by launching more computers and expanding into new territories. Apple wanted to see if it could help its flagging business in the early 1990s by investing in speakers and cameras, and perhaps most interestingly, tried its luck with the now-infamous Apple Newton.

Apple Computer was founded in 1976 by Steve Jobs (right), Steve Wozniak (left) and Ronald Wayne (not pictured) in the garage of Jobs’ parents.Apple/dpa/Corbis

As Apple’s shares continued to plummet and signs of a rebound waning by the moment, Sculley was ultimately replaced by Michael Spindler in 1993. His job was to turn Apple around and rediscover the secret sauce that had made the company successful nearly 20 years prior. Spindler’s efforts again fell short, prompting him to seek buyout offers from far more successful companies, including IBM and Sun Microsystems. Before he was ousted in 1996 and replaced by CEO Gil Amelio, Spindler and his board offered companies Apple on a silver platter for several billion dollars—a pittance compared to its current market value of $615 billion.

Meanwhile, Jobs was hard at work at a new company he founded, dubbed NeXT. Having its own trouble finding a spot in a world dominated by Windows, NeXT was trying to make NeXTSTEP, its computer operating system pitched as a desirable alternative to Windows.

Then Apple came calling back.

In 1997, Apple acquired NeXT to get its hands on NeXTSTEP—and Jobs. It didn’t take long for Jobs to reassert himself at the company. Within months, Amelio was gone, leaving the board with no other choice but to give the chief executive job back to Jobs.

The story from this point, of course, is legendary.

It was in 2001, though, that Jobs and Apple started to soar. With its Mac business back to the basics and growing, Apple unveiled the iPod, a music player that would change the music industry forever. While the iPod had several competitors over the years, it was by far the most popular digital music player in the world. Indeed, it became a pop culture phenomenon, and it was rather common to see people scrolling the wheel on the device to hear their next track. Along the way, they had those white earbuds in their ears, showcasing to the world in now-iconic fashion that they were using an Apple product.

As the iPod’s fame grew, the notoriously secretive Apple was looking to disrupt another market: smartphones.

There were several companies already offering smart devices, such as Palm and BlackBerry. But Apple wanted to try something new. In 2007, Apple introduced the iPhone, a device that relied on a touchscreen—not physical keys and hardware components like competing devices—to control its proprietary software. It was another crowning achievement for Jobs and solidified his position as one of the most ground-breaking technology executives in the industry’s history.

In 2010, armed with a slew of successful products, Apple announced the iPad, a tablet that would sell exceedingly well for several years. Apple, once again, had a hit on its hands.

All the while, Apple’s shares and profits were soaring. The company was generating billions of dollars in profits each quarter, shareholders couldn’t get enough of its stock, and despite some health issues, Jobs appeared to be firmly in control.

Everything, it seemed, was perfect.

But over the last few years, Apple has faced its fair share of challenges. Google’s (GOOGL) Android platform has become the world’s most popular mobile operating system. Several other device makers, including Samsung, have been delivering compelling alternatives to the iPhone. Meanwhile, the tablet market has cooled off, and Apple’s iPad business has been in free fall.

In addition, the once-secretive company hasn’t plugged its leaks so well, and now, it’s not uncommon for many of Apple’s biggest announcements to be leaked before its press shows even kick off.

Tragedy has also struck Apple. Following a years-long battle with cancer, Jobs died in 2012, leaving a massive void in Cupertino. Jobs handpicked his chief operating officer, Tim Cook, to take over Apple and lead the company into the future.

The Cook era has been relatively stable. Despite the aforementioned concerns with Apple’s tablet business, the company is still generating record sales and boosting its cash coffers. Indeed, Apple is one of the richest companies in the world, and there are no signs of it slowing down.

Looking ahead, like Jobs, Cook seems ready to see beyond Apple’s standard products. He’s already ventured into streaming with Apple Music and is reportedly working on entering new categories, including paid TV services. Most notably, Cook has reportedly assembled a secret team with one goal: to develop an Apple car.

But that’s the future.

April 1 is Apple’s day to look back on the successes, the failures, the rebounds, the retreats. It’s also an opportunity to celebrate what the company has become, and what it has done with technology to dramatically change our lives.

Not everyone is an Apple fan, and there are many legitimate reasons for that.

But looking at what Apple has accomplished in 40 years, at least on April Fool’s Day, it would be foolish not to tip one’s hat for all it’s done.