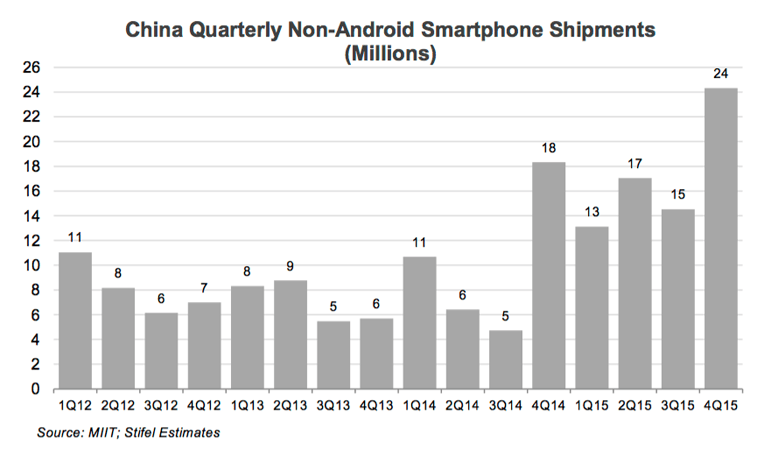 That flies in the face of a series of bearish reports that have helped push the Apple’s (AAPL) share price down more than 16% over the past month.

In the wake of those reports—based on warnings from Asian parts suppliers—most Apple analysts trimmed their March quarter iPhone estimates. But at least five cut their December estimates as well. Two of them—Morgan Stanley’s Katy Huberty and Cowan’s Timothy Arcuri—have told clients that Apple may report on Jan. 26 that it sold fewer iPhones last quarter than it did in the same quarter the year before.

This despite CEO Tim Cook’s assurance in October that Apple was on track to beat last year’s record sale of 74.5 million iPhones.

Rakers drew his estimate from data released by China’s Ministry of Industry and Information Technology. I quote:

“Android smartphones are estimated to have accounted for approximately 81% of total C4Q15 China domestic smartphone shipments, down from 88% in C3Q15 and 82.5% in C4Q14. This leaves total non-Android (Apple iPhone = majority?) shipments at a record ~24.3 million in C4Q15, an increase from 18. 3 million in C4Q14 and up from 14.5 in the prior quarter—implied non-Android smartphone phone shipments up 33% y/y and 67% sequentially in C4Q15.”

Separately, Mizuho analyst Abhey Lamba lowered his price target overnight (to $120 from $125) but raised his Apple recommendation to Buy from Neutral, urging clients not to miss the forest for the trees.

“Investors seem to be too caught up in short term data points,” he wrote. “While we acknowledge weaker data points from the supply chain and softness in China, we believe similar to last year, investors are likely making a mistake in extrapolating the data to eternity.”

UPDATE: Oppenheimer’s Andrew Uerkwitz slashed his price target even more sharply, to $120 from the $155. “Investors will have to accept Apple’s transition to a recurring revenue-based mode, which may be hard to swallow for some.”