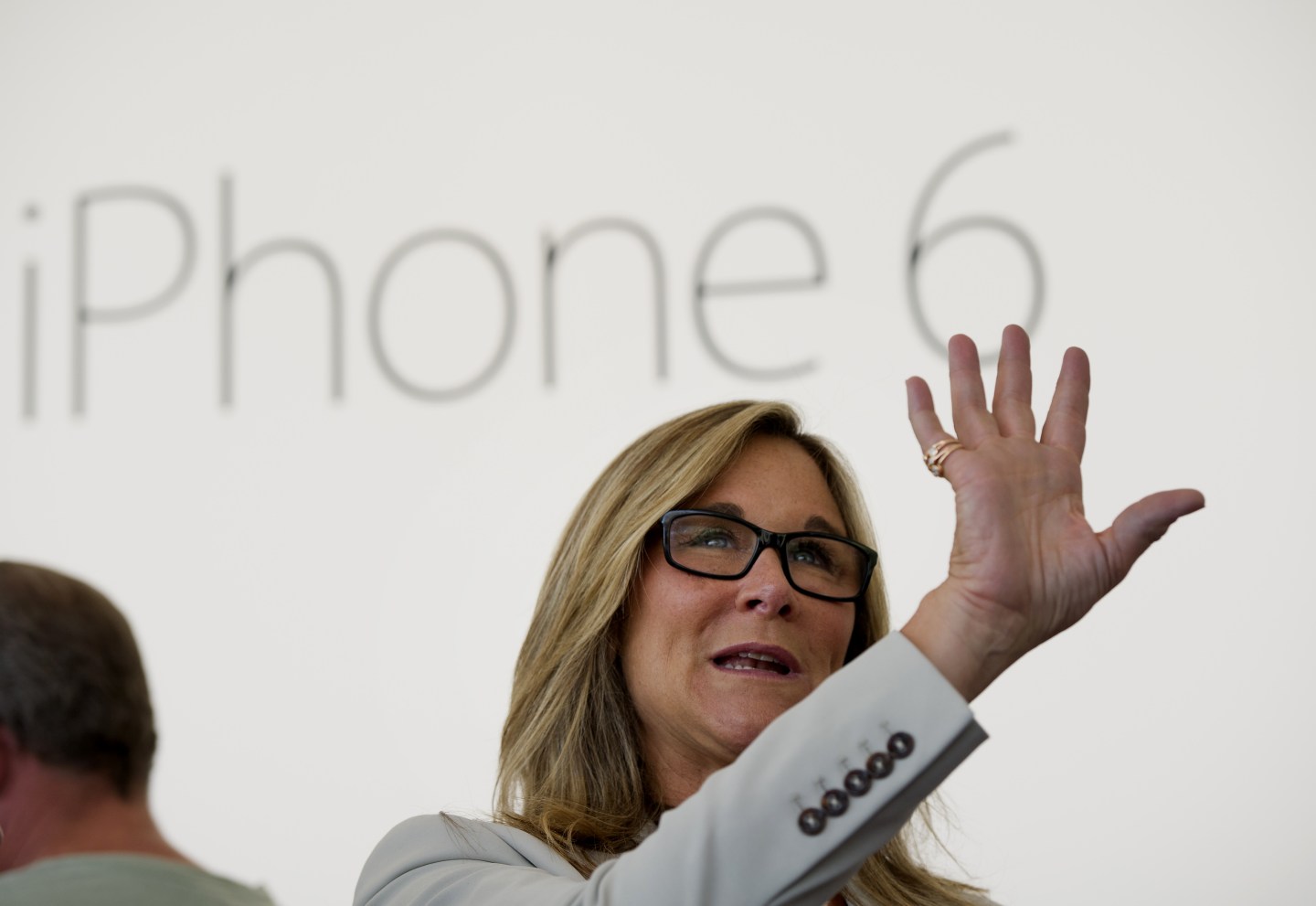 Angela Ahrendts, senior vice president of retail and online stores at Apple Inc., tours an Apple Inc. store during the sales launch for the iPhone 6 and iPhone 6 Plus in Palo Alto, California, U.S., on Friday, Sept. 19, 2014. Apple Inc.'s stores attracted long lines of shoppers for the debut of the latest iPhones, indicating healthy demand for the bigger-screen smartphones. The larger iPhone 6 Plus is already selling out at some stores across the U.S. Photographer: David Paul Morris/Bloomberg via Getty Images
Photography by David Paul Morris—Bloomberg via Getty Images

According to a proxy statement filed by the tech giant on Wednesday, Cook earned about $10 million last year. The other five named members of the executive team received more than twice that figure— $5 million in salary and $20 million in stock awards. While all the top execs’ packages are quite similar, Ahrendts ended 2015 with the largest total: $25,779,229. (CFO Luca Maestri is nipping at her heels with $25,337,977.)

This isn’t the first time Ahrendts, Apple’s SVP of retail and online stores, has come out on top of the pay pile. She was the highest-paid woman on Fortune’s 2015 list of Most Powerful Women and is the highest-paid female executive in the U.S., according to Bloomberg’s Pay Index.

The former CEO of Burberry spearheaded the retail launch of the Apple Watch, which received mixed reviews. Her other focus has been integrating Apple’s (AAPL) online and retail divisions, as well as expanding the company’s retail presence in China.

Last September, Cook spoke to Fortune senior editor Jennifer Reingold about how Ahrendts was fairing 16 months into her job. “It felt like she’d been here a decade the first day,” he told Reingold. “I knew she was going to be off the charts, but she’s even more off the charts than I thought. She came in so fast. There was no [learning] curve.”

While Apple may have achieved pay equity at the tippy top of the company, it’s not clear how women at lower levels of the organization are fairing. One thing is for certain: Apple, like fellow tech giants Facebook and Google, is still heavily skewed towards men. According to its latest diversity report, less than a third (31%) of its global workforce is female. this number gets even smaller at the top, with women comprising only 28% of its leadership team as of June 2015. Still, the company is making progress: According to head of human resources Denise Young Smith, more than 11,000 women have been hired worldwide in the past 12 months, a 65% increase from the previous year.

Note: Fortune has reached out to Apple for comment regarding gender equality in compensation across the firm. We will update this story if and when the company responds.