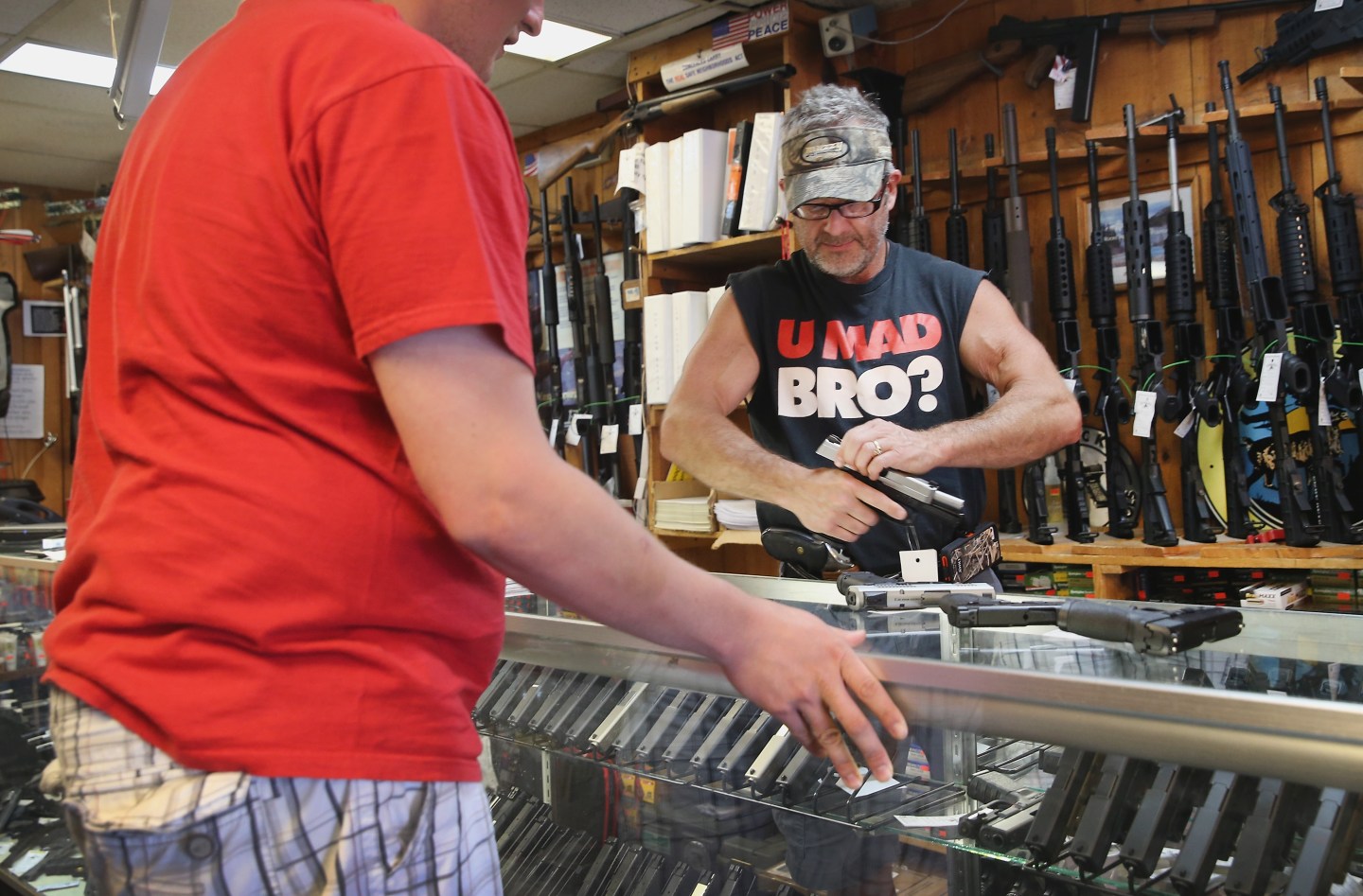 TINLEY PARK, IL - JUNE 16: Danny Egan (R) helps a customer shop for a handgun at Freddie Bear Sports on June 16, 2014 in Tinley Park, Illinois. In a 5-4 decision the Supreme Court ruled that it is a crime for one person to buy a gun for another while lying to the dealer about who the gun is for. The law had been challenged by retired police officer Bruce Abramski who was charged with making a "straw purchase" after buying a gun for his uncle, a lawful gun owner, in order to get a police discount at the dealer. When asked on the paperwork if the gun was for him he checked yes. (Photo by Scott Olson/Getty Images)
Photograph by Scott Olson via Getty Images

As gun sales in the U.S. increase, a new home shopping T.V. network dedicated to firearms is hoping to make buying one even easier.

GunTV, a new channel scheduled to premiere in January, will sell firearms and related products as well as broadcast gun-related content, according to the Desert Sun newspaper. Think of it as HSN for gun enthusiasts.

GunTV is the brainchild of Doug Bernstein and Valerie Castle, founders of the channel’s parent company, the Social Responsibility Network. Their plan is to debut with six hours of programming daily, with a goal of becoming a 24-hour network within its first year.

A promotional video states, “The ease and convenience of purchasing firearms will be as simple as consumers calling a toll-free number.”

Manufacturers must apply to have their products promoted on GunTV, which is based in California. Viewers will be able to buy those that are accepted by telephone and online. All orders are processed by Sports South, GunTV’s fulfillment partner. Shoppers have a list of pre-approved gun dealers to choose from where they can pick up their orders.

Craig Deluz, the communication director at the California Association of Federal Firearms Licensees, told the Desert Sun he was not surprised that someone would try to create an all-gun home shopping channel. But he was surprised that it’s operating from California, which has some of the nation’s strictest firearm regulations.

Laura Cutilletta, a lawyer at the Law Center to Prevent Gun Violence, expressed surprise that this venture is being taken on at all. “When you look at the number of gun deaths in this country every day, the idea that somebody’s ‘brilliant marketing scheme’ is to get more guns into the hands of more people is just a little bit outrageous,” Cuttilleta told the Desert Sun, adding that “this is the last thing we need.”

Aside from selling firearms, the network will broadcast educational and gun safety programming. As Castle told the Desert Sun, for every hour of programming, three minutes will be dedicated to firearm education and safety training. The channel’s website states that it has the potential to reach 34 million satellite television subscribers across the nation.

For more about firearms, watch this Fortune video: