Massachusetts Will Restrict Daily Fantasy Sports to Ages 21 And Up 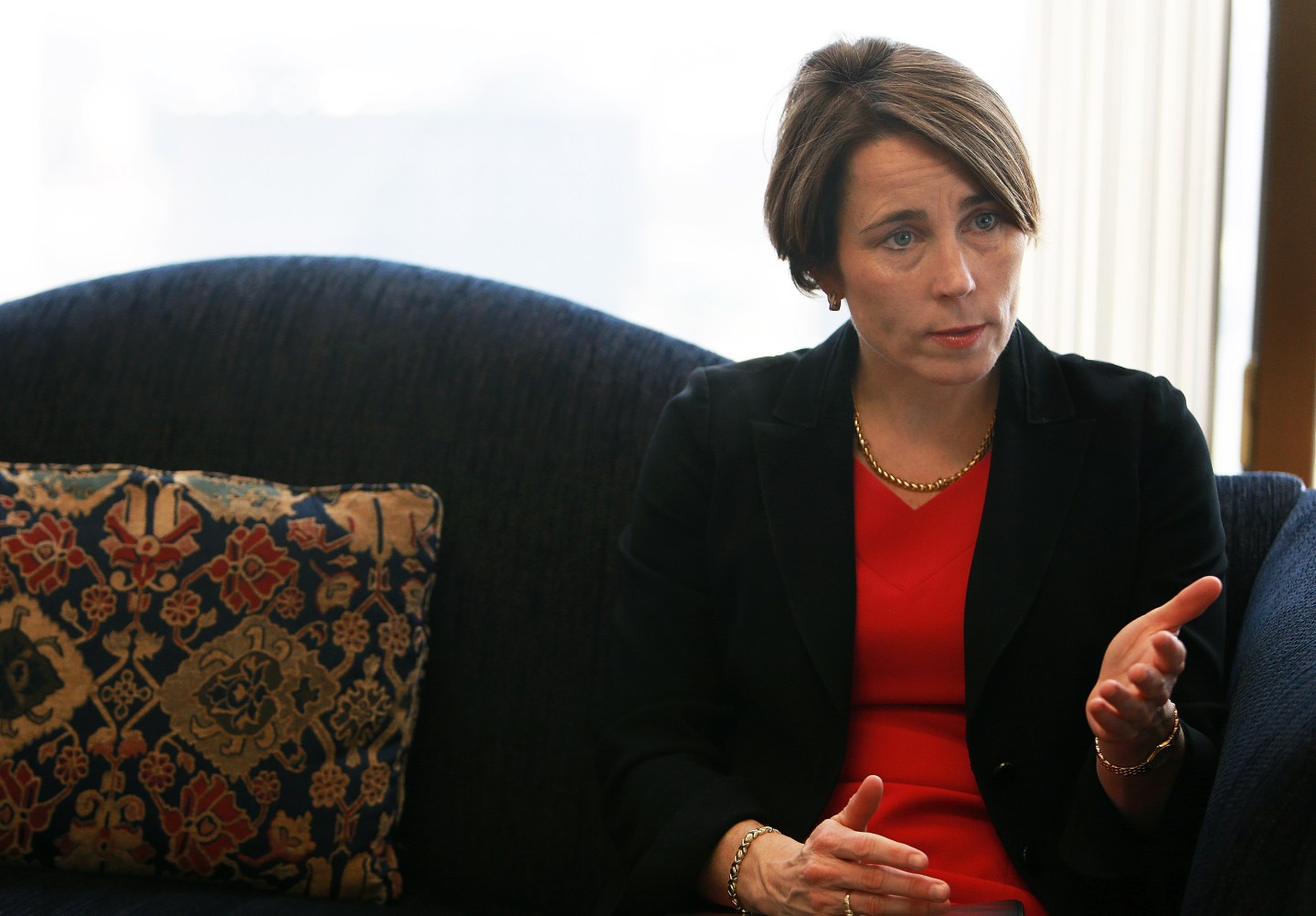 The attorneys general of New York and Massachusetts are approaching daily fantasy sports companies quite differently.

Last week, New York Attorney General Eric Schneiderman sent cease-and-desist letters to DraftKings and FanDuel, the market-share leaders in the industry, demanding they stop taking paid entries in the state. FanDuel has since complied; DraftKings has not. Both companies have filed lawsuits against Schneiderman, and a legal showdown is set for November 25.

In contrast, Massachusetts Attorney General Maura Healey announced on Thursday her proposed set of new regulations for daily fantasy operators in that state. Rather than make them illegal, as Schneiderman wants to do, Healey proposes regulating them closely.

Her most significant proposal is that playing be restricted to ages 21 and older, and that users be limited to depositing $1,000 a month. The latter rule would significantly hamper revenues for daily fantasy companies in that state. But both DraftKings and FanDuel quickly released statements voicing support for Healey’s plan, which is clearly much friendlier than Schneiderman’s. DraftKings called the proposal “a thoughtful and comprehensive approach.” FanDuel said it “makes a tremendous amount of sense.”

Healey also wants the companies banned from marketing on college campuses, a position that has already gained momentum in other corners. One of ESPN’s channels, the SEC Network, recently stopped running the DraftKings and FanDuel ads that the main ESPN channel shows. And the NCAA recently announced it would ban the companies from advertising during championship events.

Healey’s office cannot implement the new regulations immediately. Instead, it must accept public comments through January before making her proposals final. Thanks to the public comment period, the process will play out under a public microscope.

In an exclusive and candid phone call Thursday evening with Fortune, Healey spoke further about her views on the fantasy sports industry and her steps to regulate it. What follows is an edited transcript.

Fortune: These companies have been around for a few years but the flood of scrutiny didn’t come until now. Do you think it was the scandal last month that did it, with a DraftKings employee winning money on FanDuel, or was it their advertising assault? What alerted you?

Maura Healey: I agree. They’ve been around for a bit, but then they had this huge ad buy and everywhere you went, my impression is that even people with no interest in sports, you couldn’t get away from them.

We started looking at this several months ago, back in the late spring and through the summer. Certainly our review continued and continues to this day, but it’s something we have had on our screen here for quite a while. We have a gaming division in the office, and my gaming division was aware of the development of daily fantasy sports and what they were out there trying to do in the market, and so we started looking at it. We reached out to the companies, requested meetings with them, and over the last few months have been back and forth with them.

How much time have you spent with both companies?

We spent time with both companies in person. I can’t say the exact number of meetings, but there were multiple meetings, multiple telephone conversations, and I think real ample opportunity for us to get a sense of how this industry operates and what their business model is.

How much have the actions of other states affected your actions? Has it made you hurry up?

We are just focused on our own review and making sure we feel comfortable we are protecting players in Massachusetts. Frankly, what other states are doing or looking at or the actions they are taking is not something we take account of. We look at our own laws, look at consumer protection issues, and make sure we establish what doesn’t yet exist here, which is a legal and regulatory framework to address this industry.

We were looking at this issue well before there were allegations of ‘insider trading.’ But I think, as you said, it certainly was a catalytic event in terms of inspiring or leading to, it appears, any number of investigations and reviews by offices across the country. But look, we recognized this was an issue several months ago and we undertook our review at that point. And we have moved as expeditiously as possible. Not because of anything other than the fact that our governor, legislature, and consumers in Massachusetts are wondering what the rules are. So I thought it was important our office undertake a careful review and make our findings available as soon as possible. And they are robust consumer protections. I think they’re also fair. I think they reflect an understanding of the industry. I’m sure not everyone will agree, but we’ll see.

You’ve said that you believe playing daily fantasy is in fact gambling, but you want to regulate the companies, not make them illegal. Some people seem to see that as a contradiction. But those views– thinking it’s gambling but thinking it should be legal, if regulated– are not mutually exclusive, right?

You’ve got it right. I think a lot of people looking at this would call it gambling. I’ve called it gambling. The question is whether it’s gambling that currently fits within an existing legal and regulatory framework? And my response is that is something we need to create. And even people in the industry have agreed they need to be regulated. So I don’t see those as being mutually exclusive.

Do you think the companies have been forced to misrepresent themselves—to insist they are not gambling when they should have said from the start they were gambling operators?

Well, a couple of things here. Here’s the context in which we operate in Massachusetts: There was a 2006 federal law that addressed Internet gaming. It specifically carved out fantasy sports and left it to states to regulate. Five states have banned daily fantasy sports, Massachusetts is not among those states. [Author’s note: Those five states are Arizona, Iowa, Louisiana, Montana and Washington, but not all of those states outright banned it. DraftKings and FanDuel chose to not operate in those states because the law appears to be unfriendly. In addition, Nevada recently ruled that fantasy sports sites are gambling operators, so the companies do not currently operate in that state either.] Now, we have the original anti-lottery, anti-gambling statute here in Massachusetts, and I don’t think it is clear that that applies to this new industry that was never envisioned. That said, the way for us to take immediate action here in this state and protect young people is to put out these regulations. Different offices have different tools at their disposal and may approach it differently. I respect that. I’m just doing what I think is best for consumers here.

Our consumer protections would require adequate disclosures in their marketing, and financial protections so that people do not lose their shirts.

Your predecessor, former Mass Attorney General Martha Coakley, is now an adviser to DraftKings. Has that had an impact, have you talked to her about the industry or met with her?

Our office has not talked to her about it. She is in fact precluded from that under ethics rules. She has a one-year-off period before she can engage with this office. So the fact of the matter is, we haven’t spoken with her at all. The companies have quite a lot of lawyers—we’ve been working with them.

Are you eager to see other states follow your lead here?

I think we have proposed a robust roadmap here for Massachusetts. To the extent other states are interested in copying that, we’ll see what happens. I wouldn’t be surprised if they do, because we have spent considerable time on this issue. These are the first consumer protection regulations of this kind in the country. I think they provide a much needed framework for what has been an unregulated industry. And I hope and expect the companies to begin implementing them immediately.

But they don’t have to, until January or later.

Yes. Per our rule-making, there’s a comment period over the next couple months and a public hearing, and we will continue to take input from all stakeholders, including the companies. Then they will become effective early in the year, at the end of January or after that.

I want to make sure we get it right.

For more about fantasy sports, watch this Fortune video: