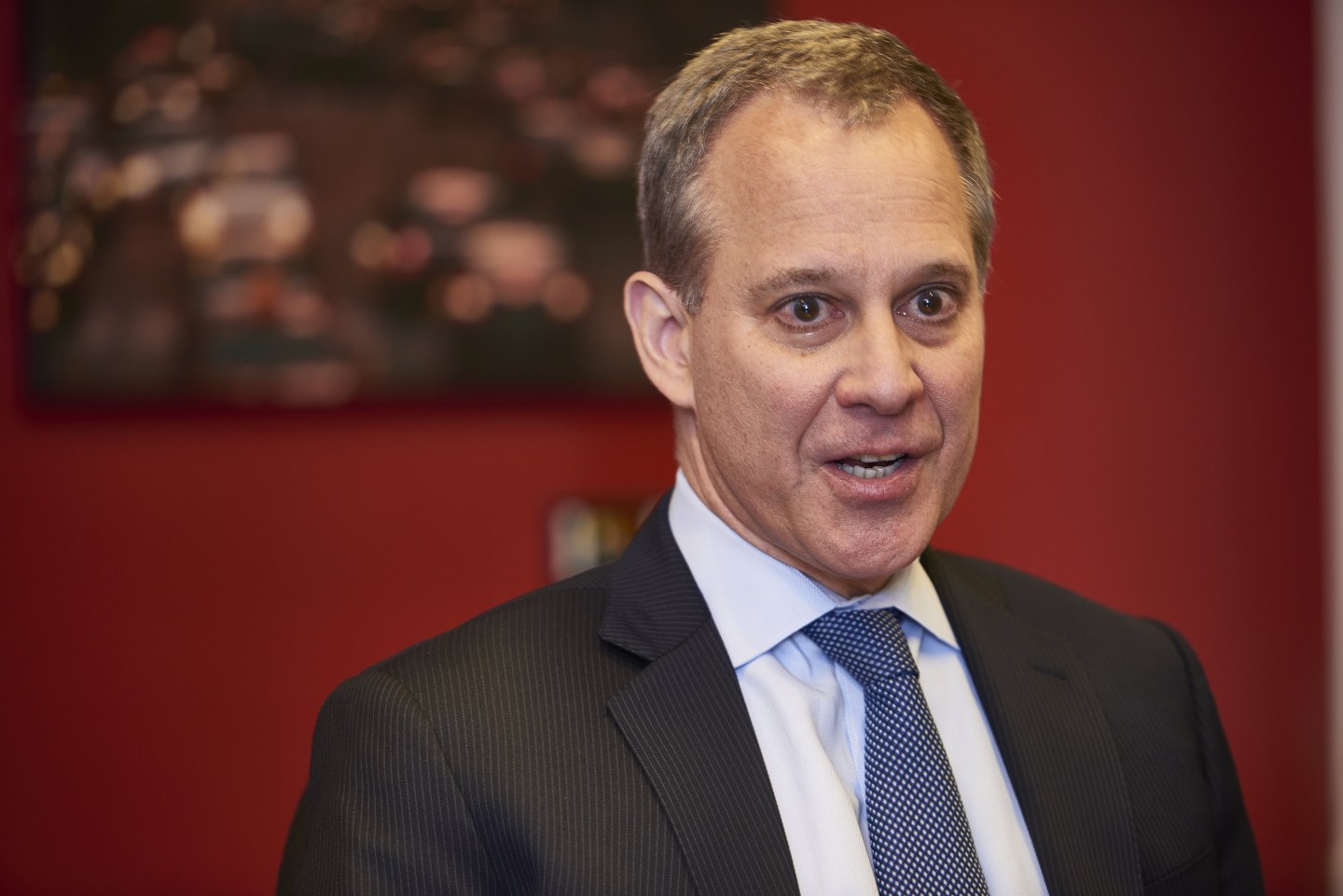 There has been a slew of bad news over the past month for the leading daily fantasy sports companies, but the latest may be the most significant blow so far. Late Tuesday, New York Attorney General Eric Schneiderman announced that after a month-long investigation, he has determined DraftKings and FanDuel to be in violation of the state’s gambling laws. He issued the two companies cease-and-desist letters in New York, which has the most daily fantasy sports players of any state, according to Eilers Research.

Even though he only sent cease and desist letters to the two leading operators, Schneiderman had harsh words for the entire daily fantasy industry. Together, DraftKings and FanDuel own 95% of the daily fantasy sports market, but tech giant Yahoo entered the space with its own daily platform this year. Schneiderman said in his press release:

“Daily fantasy sports companies are engaged in illegal gambling under New York law, causing the same kinds of social and economic harms as other forms of illegal gambling, and misleading New York consumers…Daily fantasy sports is neither victimless nor harmless, and it is clear that DraftKings and FanDuel are the leaders of a massive, multi-billion-dollar scheme intended to evade the law and fleece sports fans across the country. Today we have sent a clear message: not in New York, and not on my watch.”

In his letters to DraftKings and FanDuel, Schneiderman wrote that customers “are clearly placing bets on events outside of their control or influence, specifically on the real-game performance of professional athletes.” He added that each entry fee, in his view, “represents a wager on a ‘contest of chance’ where winning or losing depends on numerous elements of chance to a ‘material degree.'”

That “material degree” phrase is the key in New York. The legality of the paid contests DraftKings and FanDuel offer depends on each individual state’s requirement for the balance between skill and chance. At the federal level, no law has explicitly made fantasy sports contests illegal; the most recent relevant legislation, the 2006 Unlawful Internet Gambling Enforcement Act, left fantasy sports out of it.

The companies have argued, since their inception, that their contests are games of skill, since they can prove with data that certain users repeatedly win thanks to expertise and research. In some states the requirement is quite lax, like in Kansas, where a fantasy sports contest most only prove that it involves more skill than chance—a low bar. In New York, the companies will have to prove that there is no “material degree” of chance in their contests—a much more stringent hurdle.

Nonetheless, DraftKings and FanDuel will attempt to make that argument. Both companies issued strong responses to Schneiderman’s decree. “We are very disappointed that New York Attorney General Eric Schneiderman took such hasty action today,” DraftKings said, “particularly since he did not take any time to understand our business or why daily fantasy sports are clearly a game of skill. We strongly disagree with the reasoning in his opinion and will examine and vigorously pursue all legal options available to ensure our over half a million customers in New York State can continue to play the fantasy sports games they love.” (A spokesperson for Schneiderman rejects the notion that the A.G. “did not take any time to understand” DraftKings; he tells Fortune that Schneiderman met with CEO Jason Robins on October 9 and then met with DraftKings attorneys on October 23.)

FanDuel was even stronger in its rebuttal, accusing the Attorney General of looking to promote himself. “This is a politician telling hundreds of thousands of New Yorkers they are not allowed to play a game they love,” Fanduel said. “The game has been played—legally—in New York for years and years, but after the Attorney General realized he could now get himself some press coverage, he decided a game that has been around for a long, long time is suddenly now not legal… The only thing that changed today is the Attorney General’s mind.”

Late on Tuesday night, a Republican congressman from New York, Chris Collins, echoed FanDuel’s sentiment, accusing Schneiderman of grandstanding for his own self-promotion: “New York’s Attorney General once again proved that he is singularly focused on grabbing newspaper headlines,” Collins said in a statement. “Schneiderman is unilaterally denying hundreds of thousands of New Yorkers that use FanDuel and DraftKings the ability to compete in this game of skill…Let’s all take a timeout from government overreach and make sure we get it right.”

.@AGSchneiderman your decision on daily fantasy sports is another blatant grab for headlines @ the expense of New Yorker's personal freedoms

But Collins is not without his grievances against Schneiderman: in May, the Attorney General oversaw a federal probe that involved law enforcement officials searching Collins’s home.

Even though FanDuel has been around since 2009 and DraftKings launched in 2012, the regulatory scrutiny did not explode until this year, sparked both by the companies’ aggressive advertising assault and by a September scandal around a DraftKings employee winning hundreds of thousands of dollars in a FanDuel contest. (For much more on that, see: Everything you need to know about the DraftKings and FanDuel data scandal.)

The specific issue of “insider play” by employees has been addressed now, but the ensuing media storm brought these companies to the attention of lawmakers. A number of states and government entities have announced that they are investigating daily fantasy sports in recent weeks; prior to Schneiderman’s announcement, only Nevada had actually issued a new edict about them.

Last month, Nevada’s Gaming Control Board ruled that daily fantasy sports operators (including Yahoo and all the smaller players too) are gambling operators and that, as such, they must obtain gambling licenses to continue offering paid contests in the state. The companies, for now, have complied in shutting off their paid contests there and have not applied for those licenses. The situation in New York is different from that in Nevada for a few key reasons: the size of the customer base in the two states; the influence and power of incumbent brick-and-mortar casinos in Nevada; the fact that Nevada’s laws are unique to Nevada while New York’s “material degree” requirement is echoed in seven other states; the significance of New York, not just in terms of customer base but optics —FanDuel is headquartered there—and cultural importance. But FanDuel, at least, sees the two situations as different for a single reason, according to a spokesperson: Schneiderman’s letter is a “civil demand,” not a “ruling” like Nevada made.

In New York, DraftKings and FanDuel will aggressively fight the Attorney General.

The two companies have five days to respond in court, and say they will. Until a court decision is reached, DraftKings and FanDuel will continue to offer paid contests in New York, both confirmed to Fortune. The companies have also indicated that they might continue to ignore the cease and desist even after the five-day period. As for Schneiderman, at the end of the five-day period he will likely file a lawsuit against the two companies that would demand they be barred from doing business in New York, and would require them to pay state fines and potentially pay back restitutions to New York customers as well.

“We intend to challenge the AG’s position and fight back with everything in our arsenal to defend our players and our business,” a FanDuel spokesperson said in an email statement sent to Fortune. The company also indicated that it feels Schneiderman is disparaging its users.

In a similar email statement, DraftKings tells Fortune: “There is a process by which hasty and uninformed opinions can be challenged in a court of law, which would allow DraftKings to not have to cease operations in the state of New York. We will pursue this fight to the fullest to ensure that New York fantasy sports fans do not need to stop playing the games they love.”

In other words, this fight is going to get hotter, louder, and angrier. DraftKings and FanDuel, on behalf of the daily fantasy sports industry, are about to go to war with Eric Schneiderman.