Craft beer’s big dilemma: Hold out or sell out 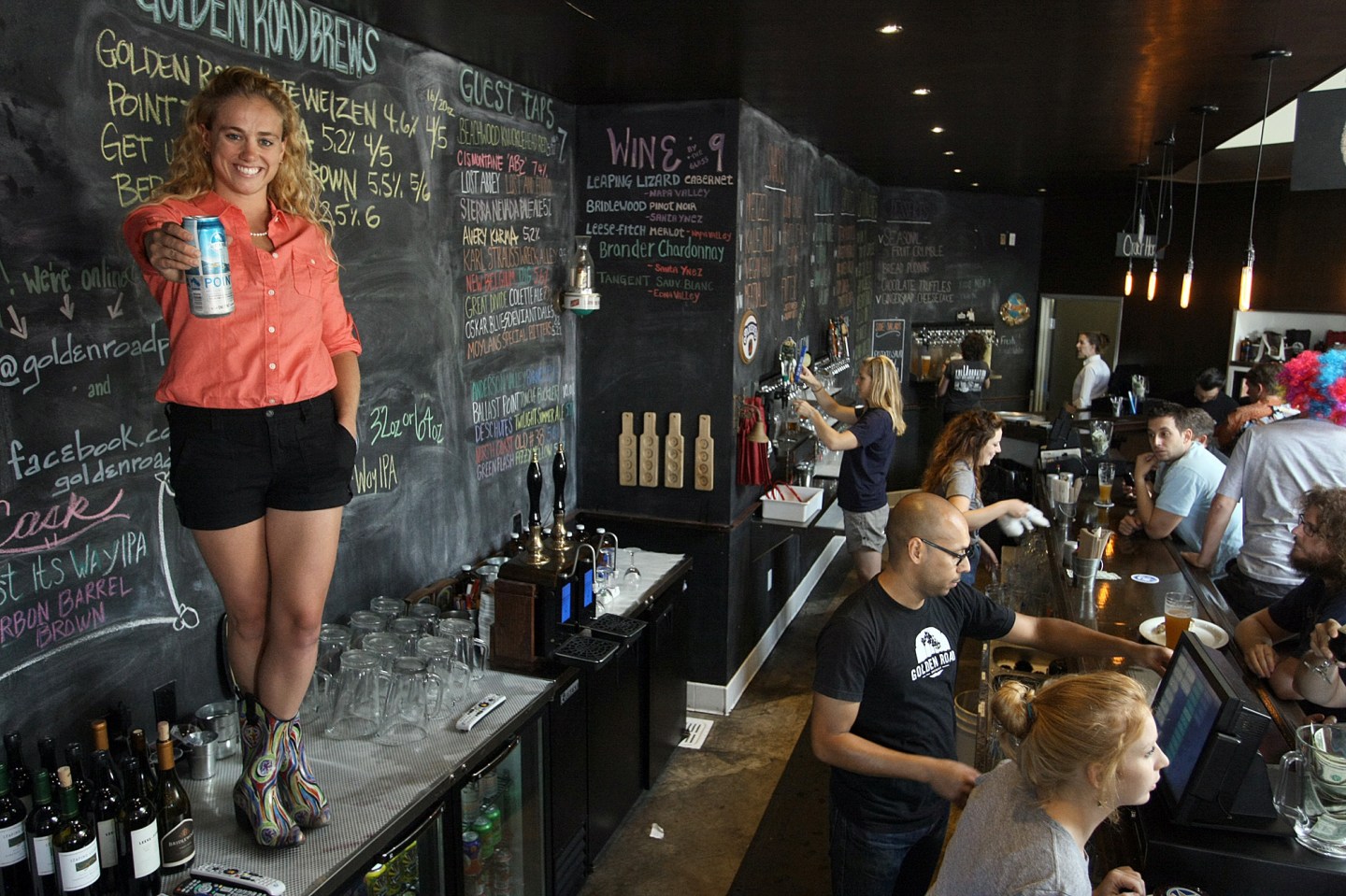 Founded in 1996 during a peak period for the craft beer industry, Seattle-based Elysian grew to sell over 50,000 barrels by 2014. A tiny brewer, considering the total U.S. craft beer market produces 22.2 million barrels each year, it was bought by Anheuser-Busch InBev last January. Elysian is one of five small brewers the world’s largest beer producer has acquired in the past five years.

After AB-InBev (BUD) first courted Elysian during a craft beer conference in April 2014, Cantwell soon found himself overruled by his other two co-founders, who wanted to sell the business. Loyal customers were outraged, and Cantwell was equally perturbed after AB InBev unveiled an ad campaign mocking the craft beer industry. “Let them sip their pumpkin peach ale, we’ll be brewing us some golden suds,” a commercial teased.

“We made a pumpkin peach ale,” says Cantwell. “They called us out specifically in a mocking tone to show just how ridiculous craft breweries were, and they called out a specific beer we made.” Within 10 days of the deal’s closing, Cantwell gave notice he would leave the company he helped found. He resigned in April and has vowed to never speak to his co-founders again, soured by how the AB InBev transaction transpired.

Andy Goeler, CEO of craft at AB InBev, contends that big beer brands like Budweiser are often mocked by the craft industry, so he sees no harm in “Big Brother” poking back. “It is important to note that isn’t a company message, it is a Budweiser brand message,” he says. “Each brand is allowed to have its own voice.”

You’d be hard-pressed to find a more divisive issue in the craft beer community than Big Beer’s recent shopping spree for small brewers. It’s like the sale of any startup to a major corporation: The new parent company offers valuable marketing and distribution muscle, but the scrappy upstart runs the risk of losing its soul.

“M&A isn’t a term I use a lot. I think you mean ‘selling out,’” says Stone Brewing co-founder Greg Koch. “Some of us got into this for our passion … and wanting to fight ‘the man.’ Crazy as that may seem, there are some of us that may hold to that vision.”

Koch, who recently announced plans to step down as CEO to assume the role of executive chairman, vows he won’t sell Escondido, Calif.-based Stone, and that because of his public comments on the topic, he hasn’t been courted by big brewers or private equity firms. “They know my response would include the words ‘sand’ and ‘pound,’ ” he says.

But is selling your company really selling out? Many craft brewers are perfectly happy with their new corporate parents.

One of Cantwell’s co-founders, Elysian CEO Joe Bisacca, defends his decision to sell to AB InBev, noting that the small brewer nearly went out of business several times over the past decade. “Those dire straits can really shut you down and take innovation away,” he says. “This model now—when something comes up—people at AB have marching orders to help us out.”

All three of those sales went down just last September, and the big money keeps on buying rounds. Just last week, Milton, Del.-based Dogfish Head, the nation’s 13th-largest craft brewer, sold a minority stake to a private equity firm. In fact, there has been more than one craft beer deal per month over the past 14 months, according to Craftbrewingbusiness.com.

So why all the deal making and why now? Heady growth from the craft beer industry is why. Volume is essentially flat for the overall $101.5 billion beer market, as big brands struggle with sliding sales (and flirt with mega-mergers). But craft beer now controls 11% of the total U.S. beer market, up from 5% in 2010, according to trade organization The Brewers Association.

“In the last two years, we’ve seen one by one, several strategic moves by the large global brewers to do mergers and acquisitions of smaller craft breweries in a more fast-paced manner than in the past,” says Julia Herz, craft beer program director for The Brewers Association.

Beyond a price tag that can be worth tens of millions of dollars, a number of craft brewers who’ve recently sold their businesses list distribution as a key motivator. Many small beer makers wield regional strength, but getting into new markets can be tough, especially when many bars only allocate a few handles behind the bar to craft beers. Larger sales and marketing teams, established human resource departments, and fancier brewery equipment are also lures—as well as access to higher quality ingredients, which are one of craft brew’s biggest selling points.

The launch of Blue Moon’s White IPA, for example, may not have happened without the might of parent company MillerCoors. The large brewer was able to procure rare hops used in the formula, and its sales team facilitated a connection with Buffalo Wild Wings (BWLD), which quickly added the new beer to the restaurant chain’s taps.

MillerCoors, the joint venture of brewing giants SABMiller and Molson Coors (TAP), has been in the business of buying craft brands longer than most. It controls Blue Moon but even years before that brand was introduced, Miller Brewing Co. (a predecessor company to MillerCoors) bought The Jacob Leinenkugel Brewing Company in 1988. At the time of the sale, Leinenkugel sold roughly 80,000 barrels a year in just four states. The deal occurred at a time when the word “craft” hadn’t even been assigned to the industry—small companies were “microbrewing” back then.

Dick Leinenkugel, current president and great-great-grandson of founder Jacob Leinenkugel, says his family has no regrets: “My point of view is that we are all brewers, and you need to be united as an industry, because our battle is really about making beer interesting again and taking share from wine and spirits.”

Leinenkugel says working with MillerCoors has aided his business on several fronts, most notably for distribution and improvements to the company’s Chippewa Falls, Wis., brewery. Leinenkugel’s Summer Shandy is a notable beneficiary of the union. It sold 30,000 barrels its first year in 2007 and quickly doubled production. MillerCoors made the lemonade-beer mix a priority by 2010, and soon after, the brand was a national hit.

“If you have a great beer, it isn’t a sin to join with a big brewer and make your beer a success,” says Blue Moon’s Villa.

One of the greatest cautionary tales that brewers should consider before selling their business is the case study of what happened to Austin-based Celis Brewery. Founded in 1992 by Pierre Celis, within a few years the company was growing almost too quickly to meet demand, so it sold a majority stake to Miller Brewing Co. in 1995. Roughly six years later—after Miller tinkered with the company’s recipes, drastically pulled distribution, and the Celis family had departed the business—the brewery was shut down in early 2001.

“You can’t control what the big breweries are going to do,” says Christine Celis, daughter of Pierre and a former general manager of the Texas brewery. “Their standpoint is, ‘How can I make this product more profitable?’ It is just the way it is and sometimes the beer itself becomes a victim of the success.” MillerCoors declined to comment.

Pierre died in 2011, but Christine is in the process of establishing a craft brewery business in Austin. She says she intends to keep the new business in her family for as long as she can.

Craft beer lovers can take comfort: The Brewers Association reports that there are now more than 4,000 active breweries in the U.S., so Big Beer buyouts can’t possibly match the pace of new businesses. 615 craft breweries opened nationwide in 2014 alone, and the Brewers Association estimates that three out of every four legal-aged adults live within 10 miles of a local brewery.

Cantwell, who is now a quality ambassador for the Brewers Association, hasn’t ruled out a return to brewing beer, though he would have to wait until the non-compete clause in his contract with AB InBev expires. Meanwhile, he’s hopeful the craft beer industry can pursue alternatives to selling. He sees potential in a cooperative model that would enable craft breweries to work together for greater purchase power to buy hops and other key ingredients, as well as giving them better negotiating position for distribution.

“I would laud such a business model,” Greg Koch of Stone Brewing says. “You can maintain your soul and your creativity while facing the reality that you have some large industrial behemoths who are working to put you out of business.”