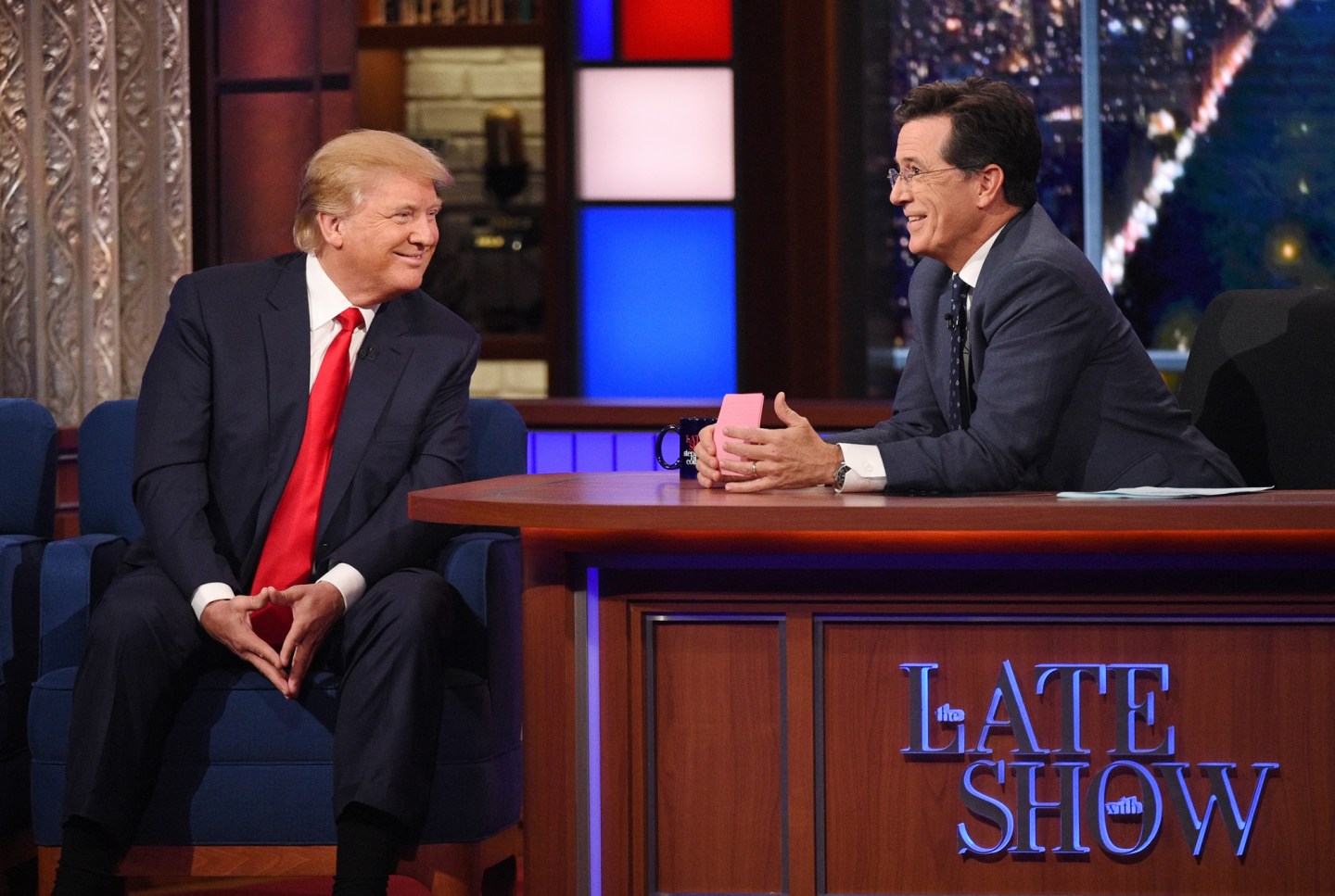 Trump sat down to chat with host Stephen Colbert, who thanked the firebrand billionaire for joining the 2016 presidential race (implying that his campaign has created a surplus of material for comedians).

“You are setting the world on fire right now,” Colbert told Trump after the late-night host spent an earlier portion of the show cracking jokes about the size of the real estate mogul’s ego.

Despite some of Colbert’s jokes, Trump’s visit was fairly low key. He spent a chunk of his time repeating his arguments in favor of building a wall at the U.S.-Mexico border — a project he claims he could convince the Mexican government to finance. Trump’s stance on immigration and Mexican immigrants was called out later, when musical guest Raury wore a jersey for Mexico’s national soccer team with Trump’s name under a large red “X” on the back.

One contentious moment came when Colbert referenced Trump’s past assertions that President Barack Obama was not born in the United States. Colbert asked Trump if he thinks Obama was born in the U.S., calling it a “meatball question.” But the presidential hopeful tried to change the subject. “I don’t talk about it anymore,” Trump told Colbert. “I talk about jobs. I talk about our veterans being horribly treated.”

Colbert got in one last jab at Trump by joking about his own past as a faux-conservative pundit at Comedy Central. “For years, I played an over-the-top conservative character. Not as long as you,” Colbert quipped.

Trump is the latest presidential candidate to appear on Colbert’s show, after visits from Republicans Jeb Bush and Ted Cruz as well as Democrat Bernie Sanders. Vice President Joe Biden also appeared on The Late Show in its first week — with Colbert urging Biden to run for president. U.S. Senator Elizabeth Warren will sit down with Colbert during Wednesday’s show.

Trump appeared on NBC’s (CMCSA) The Tonight Show two weeks ago in a visit that garnered roughly 4.5 million viewers and helped Jimmy Fallon win the ratings battle in Colbert’s first week on the air.

Fallon did take some heat for lobbing softball questions to Trump. It’s still fairly early in each show’s run, but the differences in style between Fallon and Colbert have been most apparent during visits from guests from the political or corporate spheres, with Colbert already seen as the more intellectual or highbrow host versus Fallon’s more easy-going vibe.

This week, Fallon questioned Republican candidate Carly Fiorina on whether she would support a Muslim president (she said she’d “be fine with that,” in a rebuke of previous comments by rival candidate Ben Carson). Fallon also gave Fiorina a chance to defend her record as CEO of Hewlett-Packard (HPQ) before watching her sing a song she wrote for her dog. Compare that to Cruz’s appearance on Colbert the same night, which featured a substantive debate over Ronald Reagan’s legacy, gay marriage, and the importance of compromise in governing.

Colbert certainly appears to be more likely to go to the well of non-Hollywood guests, already having welcomed corporate bigwigs such as Apple (AAPL) CEO Tim Cook and Tesla Motors (TSLA) CEO Elon Musk along with guests from various branches of government who aren’t running for office, like U.S. Supreme Court Justice Stephen Breyer and Secretary of Energy Ernest Moniz, who followed Trump on Tuesday.