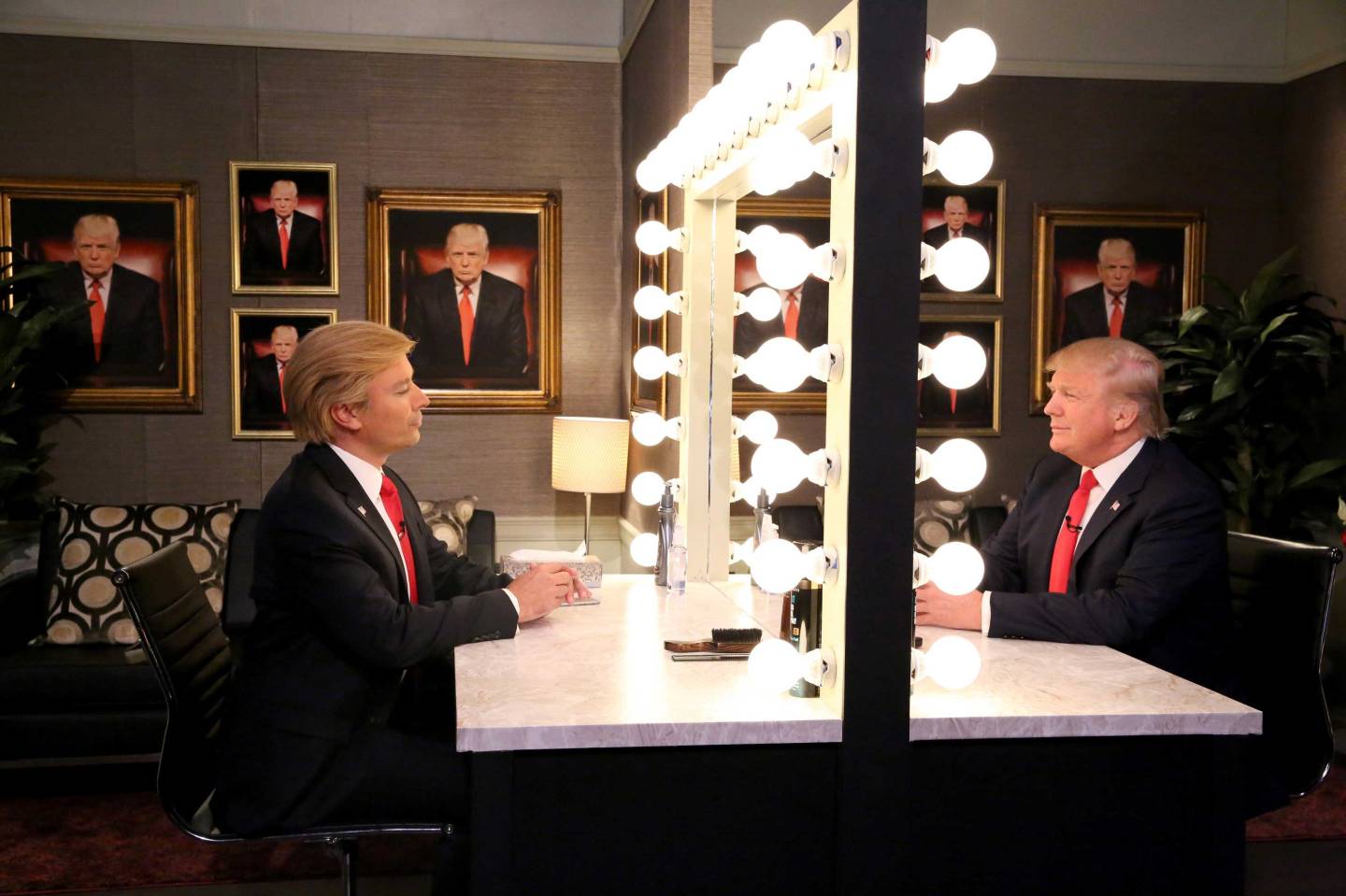 On Friday, ‘Tonight Show’ host Jimmy Fallon asked the billionaire GOP presidential candidate Donald Trump if he’s ever apologized for anything. “I fully think apologizing is a great thing,” Trump said. “But you have to be wrong…I will absolutely apologize sometime in the hopefully distant future if I’m ever wrong.”

That was about as tough as the interview got.

And that is often why talk show appearances have become regular campaign stops for presidential candidates. The presidential hopefuls want to polish up their images in a friendly environment. And the late night shows want to juice up ratings.

“From the programming side, there’s no one that’s hotter than Donald Trump [today],” David Bianculli, TV critic for NPR’s Fresh Air with Terry Gross, told Fortune. “For however long that lasts, he’s the person they want to have on at some point because he’s guaranteed to go off script, because that’s the most entertaining part of all this.”

So far this season, Stephen Colbert hosted Republican hopeful Jeb Bush and expects Trump, on September 22. Democratic candidate Bernie Sanders went on Late Night with Seth Meyers on Monday and will also join Colbert next week. Hillary Clinton will sit across from Jimmy Fallon on September 16, trailing Chris Christie by a month. So far it seems as though ABC’s Jimmy Kimmel is the only late night host without presidential candidates on the couch, but brace up. There’s a lot of time — and a lot of candidates — left.

“With more than a year left [before the election] and with the different programs out there … politicians are going to go on more of these shows than ever before,” said Bianculli.

The tradition started with John Kennedy on the Tonight Show with Jack Paar in 1960, when he discussed policies and took audience questions — the first time a presidential candidate ever did that on television. But it took Bill Clinton’s wildly popular appearance wearing sunglasses and playing the saxophone on the Arsenio Hall Show in 1992 — a booking the Tonight Show with Jay Leno passed on — to show the potential entertainment appeal and campaign value.

“It gives [the candidates] a chance to humanize themselves and put themselves in a more relaxed setting,” said John Greer, professor of political science at Vanderbilt University. “The audience here for these shows isn’t just the voters that might be watching. It’s the community of pundits that can comment on them as well so they have an afterlife.”

Candidates also get a chance to potentially set a favorable narrative that journalists, pundits, and donors might use — though sometimes it backfires, as when David Letterman threw some unexpectedly tough questions at then candidate George W. Bush.

Greer sees the parade as potentially continuing, at least through the spring until primary voting becomes more intense.

Here are some memorable appearances by presidential candidates on late night talk shows.

Clinton redefined what the appearance of a political candidate could mean when he donned sunglasses and played “Heartbreak Hotel” on the saxophone. Although “widely mocked” at the time by pundits, the appearance, combined with Clinton’s appearance on an MTV town hall shortly after, helped turn his standing in popularity polls. He was able to connect with young and black voters and reach untapped audiences, circumventing the perception that no one knew who he was.

Adding a new angle on president candidates’ talk show appearances, John McCain announced his 2008 bid to David Letterman’s audience. At the time it was thought a savvy move that would help him build momentum for a more formal announcement. But Letterman turned on McCain when McCain cancelled a September 24, 2008 Letterman appearance at the last minute and claimed to suspend his campaign to help rescue the Wall Street bailout. Letterman had video of McCain getting ready for an interview with Katie Couric instead. The result was two weeks of brutal barbs. McCain finally agreed to return to the show in mid-October.

If Clinton scored a brilliant win with Arsenio Hall, Ralph Nader, Green Party candidate in 2000, laid a big egg when he pulled out a rubber chicken to make a political joke. After a weak reaction by the audience, Leno responded, ” This comedy is not easy, is it Ralph?” The appearance only turned stranger, as Nader was clearly uncomfortable with the whole process. When Leno asked what he did for fun, Nader answered, “Strawberries.” The appearance likely hurt a quixotic run. This being pre-YouTube, no video could be found.

The first time George W. Bush was running for president, he learned that Letterman could offer a serious and pointed political interview. Letterman asked about Bush’s capital punishment record in Texas, whether there was a “circumstance you can imagine that might change your view of capital punishment” and is there were any statistics to show that the death penalty deterred crime. (Bush had none to offer.) Then Letterman kept grilling him on terrorism, the Middle East, pollution, and even climate change. The meeting ended with Bush reading a tailored top ten list. But at least Bush didn’t do as badly as he had earlier in the year on the show when he elicited boos.

Obama made history by being the first sitting president to appear on a late night show. He also gave his first public response to a couple of high-profile issues. One was his remark about the John McCain and Sarah Palin campaign’s claim that it was interested in change in policy from George W. Bush. “You can put lipstick on a pig,” Obama told a cheering crowd. “It’s still a pig.”

It was also the first time Obama addressed Mitt Romney’s controversial comments about 47% of the population being dependent on the government and would vote for Obama as a result. “When I won in 2008, 47% of the American people voted for John McCain, they didn’t vote for me,” Obama told Letterman. “And what I said on election night was, even though you didn’t vote for me, I hear your voices and I’m going to work as hard as I can to be your president. And one of the things I’ve learned as president is you represent the entire country.