Colbert is the new king of late night … for now 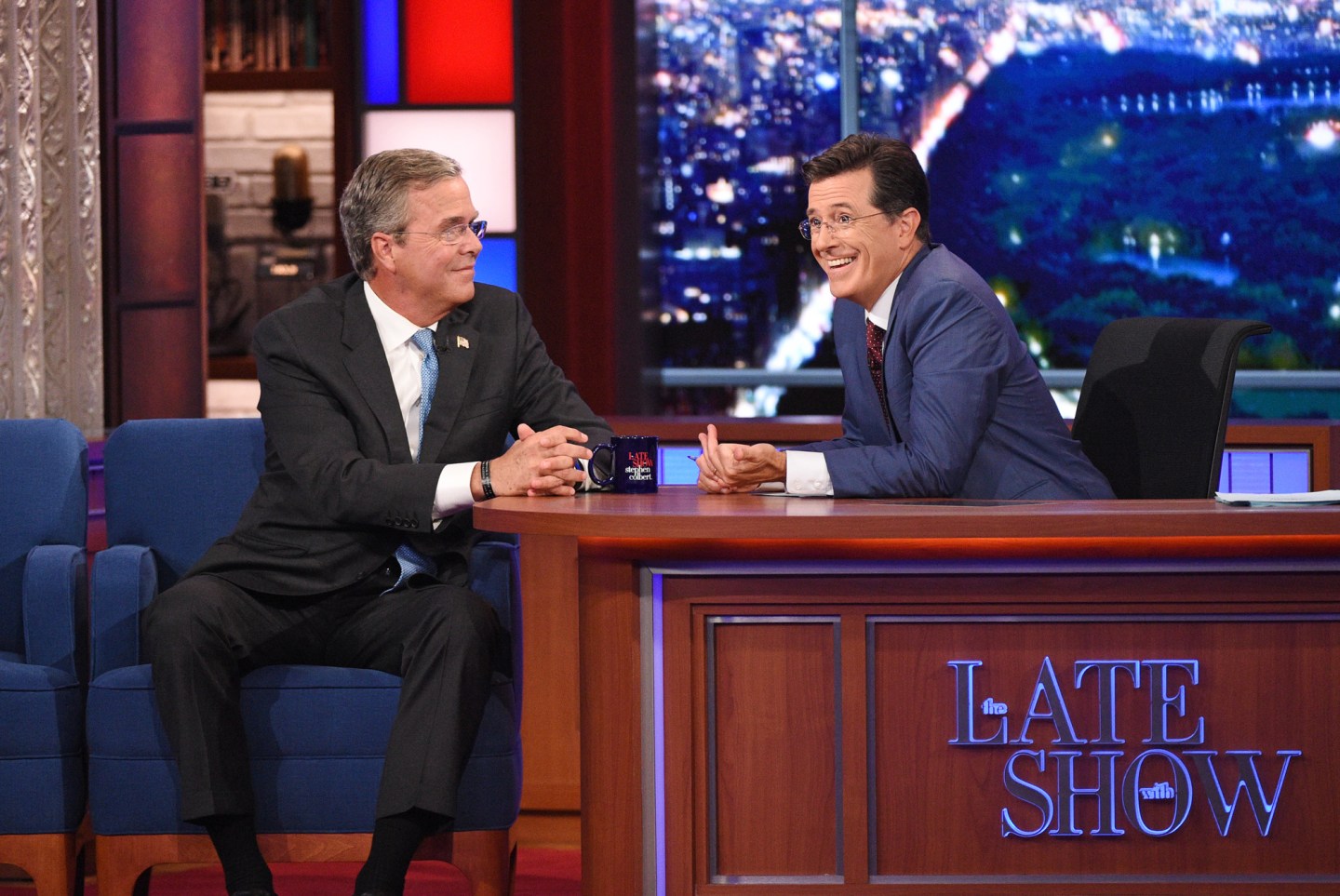 For one night, at least, Stephen Colbert is the new king of late-night television.

The debut episode of CBS’ (CBS) The Late Show with Colbert as host trumped its competition Tuesday night with a 4.9 household rating, according to preliminary numbers from ratings service Nielsen. That number means that, of all the households providing Nielsen with viewership data, 4.9% were watching Colbert interview actor George Clooney and Republican presidential hopeful Jeb Bush.

By way of comparison, Comcast’s (CMCSA) NBC and Tonight Show host Jimmy Fallon did nearly half as well, scoring a rating of 2.4 Tuesday night in direct competition with the Colbert premiere, while ABC’s Jimmy Kimmel Live checked in with a 1.4. The bump from Colbert’s lead-in even helped his following act, The Late Late Show with James Corden, rank just behind Kimmel with a 1.3 rating.

Colbert’s debut also beat out comparable episodes hosted by his predecessor, David Letterman. Ratings for Tuesday night’s premiere were up 172% over The Late Show‘s numbers for the same evening last year, and Colbert’s first episode beat the premiere from Letterman’s final season by 123%.

Granted, Colbert’s first episode was always expected to win the night, and anything else would have been viewed as a major disappointment. Fallon made two cameos on The Late Show, which basically served as a concession that the night belonged to Colbert, as well as representing a symbolic friendly gesture in a late-night TV landscape that has historically been anything but hospitable.

Of course, the pleasantries will only last so long, and the competition is already set to heat up quickly, as Fallon has plans to welcome Republican presidential front-runner Donald Trump on Friday — an appearance that is sure to result in huge ratings for NBC.

The real estate mogul has been a focal point for the media—and fodder for late-night hosts—since he joined the presidential race earlier this summer. In his debut episode, Colbert played at letting out months of pent-up frustration over not having an on-air forum to mock Trump’s unlikely ascent to the front of the Republican pack.

“I will be covering all of the presidential candidates who are Donald Trump,” Colbert joked as Jeb Bush waited in the wings for his appearance later in the program. Colbert also plans to welcome Democratic candidate Bernie Sanders next week, while Vice President Joe Biden will appear on the program this Thursday and possibly shed some light on his Presidential aspirations.

Colbert has to quickly figure out how he can stand out in the crowded late-night television picture. The stakes are high. But while there’s quite a bit of concern over the direction of the television industry in general, ad spending on network late-night talk shows, at least, jumped 14% last year, according to Kantar Media.

It may be early in the show’s run, but Colbert is already setting a precedent for booking guests beyond the traditional circle of Hollywood elite pitching their film and television projects. As Clooney led off the first episode of The Late Show, the actor freely admitted he had nothing to plug and instead spent some time talking with Colbert about his humanitarian work in the Darfur region of Sudan. In addition to the growing list of political figures set to take a seat next to Colbert on air, the new late-night show’s first week will also include appearances from tech industry titans, including Tesla Motors (TSLA) CEO Elon Musk and Uber CEO Travis Kalanick.