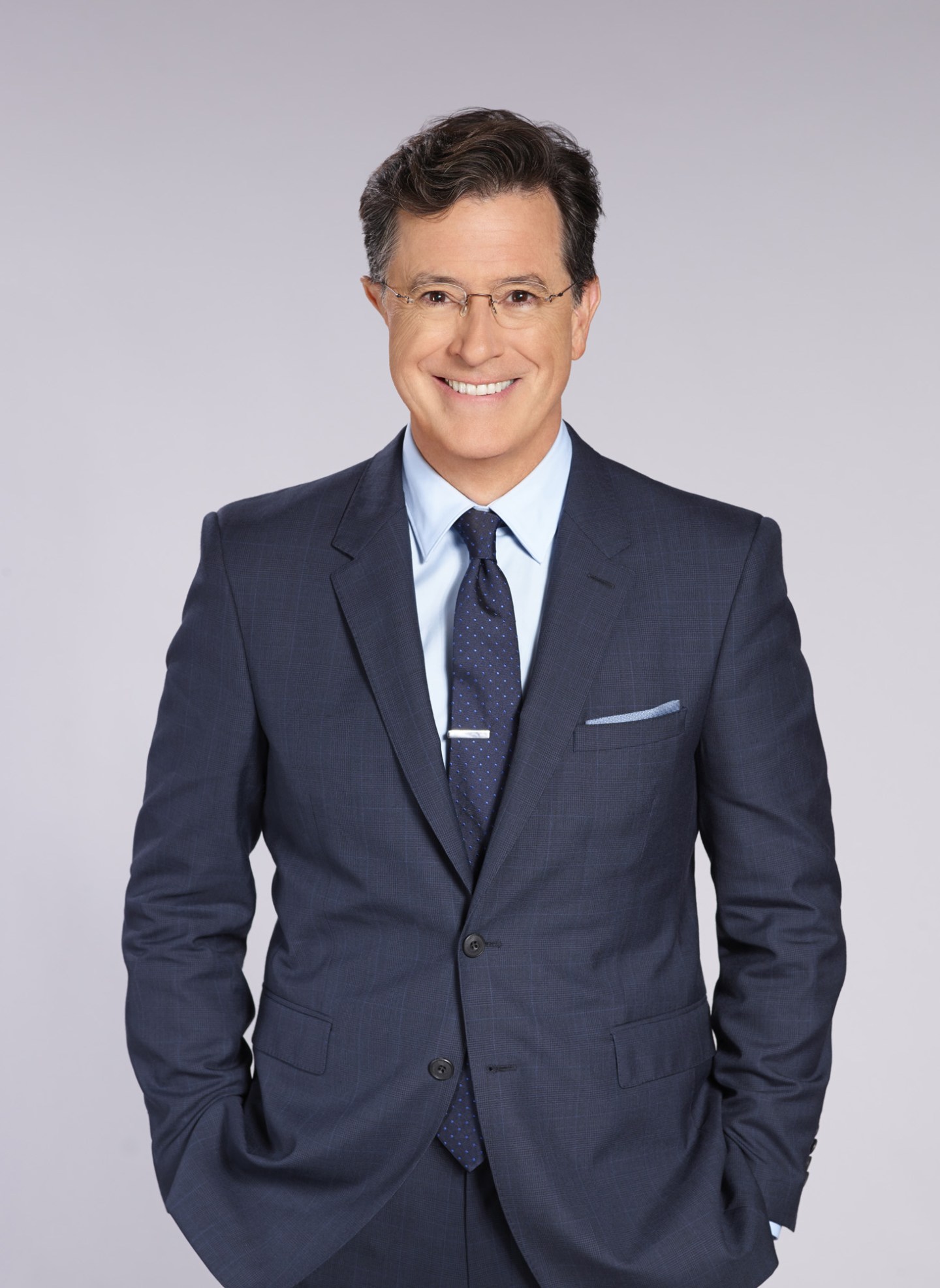 Even before Stephen Colbert delivers his first monologue Tuesday night as the second-ever host of CBS’ “Late Show,” the late-night wars are in full swing. And it somehow seems appropriate that at the center of the battle sits Donald Trump.

Jimmy Fallon trumped Colbert—literally—when NBC’s The Tonight Show host announced September 1 he had booked the leading Republican presidential candidate for September 11, the first Friday of Colbert’s new gig. “Let’s face it, whoever has Trump will be the winner that night,” says Barbara Lippert, a veteran media columnist and critic at online marketing news site MediaPost.

So much for the supposed “bromance” between Colbert and Fallon. In just 18 months, Fallon has become the #1 ratings leader in late night. NBC apparently thought maintaining its No. 1 status was more important than the derogatory remarks Trump made that prompted the network in June to bounce him as host of The Celebrity Apprentice.

The third major combatant in the late-night wars is Jimmy Kimmel, host of ABC’s Jimmy Kimmel Live!, who, like Fallon, is known for his pranks that go viral. Together, the two hosts have helped transform the late-night time slot, bringing spontaneity and social media to the genre—and with them, younger demographics — and ad dollars.

In 2014, ad spending on network late-night talk shows alone was $597.5 million, up 14% from the previous year, according to Kantar Media.

At a time when viewers are using DVRs or streaming, late-night talk shows remain one of the last bastions of live viewership. But the numbers are slipping here, too. When David Letterman began his stint on CBS’s Late Show With David Letterman 22 years ago, the audience was about 7.8 million viewers, reports the entertainment site, The Wrap; by last year, it had dwindled to under 3 million.

For Letterman, the much-coveted 18-to-49 demographic proved particularly elusive at the end. The median age of his viewers was 61 when he exited, according to Billie Gold, vice president and director of programming research for marketing and communications giant Dentsu Aegis.

Kimmel and Fallon have reversed the trend, with Fallon’s median 55 and Kimmel’s 57, Gold notes. With the arrival of Colbert, fresh out of Comedy Central where The Colbert Report achieved a median closer to 41, CBS executives likely hope for even more improvement. Gold speculates that Colbert’s median age will settle in slightly lower than Fallon’s, at 53 or 54, with the first two weeks potentially even lower.

This explains why advertisers have been flocking to CBS at least for those initial shows, Gold says.

With the departures of Jon Stewart and Colbert, Comedy Central also is going through transition and searching for ways not to lose the lucrative young audience those two comedians had provided the network for years. On September 28, Trevor Noah, a black South African comic relatively unknown in the U.S., will officially replace Stewart as host of The Daily Show.

Noah isn’t the first non-white talk show host, but late night is overwhelmingly white and male. Comedy Central also has Larry Wilmore, host of The Nightly Show With Larry Wilmore, which follows The Daily Show every night and has suffered since Stewart left.

Further liberating late night, TBS is giving Samantha Bee, a former Daily Show correspondent, her own talk show in January. Stewart and Colbert were competition for the major network talk shows—at least when it came to younger demographics. It’s unclear at this point whether their audiences will stick with Comedy Central when they’re not there.

Ultimately, however, that’s probably not where the major battles of the new late-night war will be fought. The focus is on the contenders from the Big Three networks. And after the recent announcements about the initial roster of guests, some advertising executives believe Fallon may have already won even before Colbert does his first show.

“While CBS has done a spectacular job of promoting his debut, I think the roster of guests potentially may hurt his chances of attracting a mass audience.” says Dentsu Aegis’ Gold. “I was a little surprised at the degree of concentration on political and business types. But then again, those are his roots with The Colbert Report.”

Gold sees Colbert as “trying to differentiate himself from Fallon and Kimmel who are all about entertainment and celebrity,” but she cautions that while his lineup may attract a more upscale and younger viewership, it may not attract enough. “The question is whether he’ll get the numbers that would please a Comedy Central or the numbers that will please a CBS,” she says.

Looking at Fallon’s and Colbert’s lineups next to each other, the differences are apparent, with Fallon going after the biggest celebrity names while Colbert is doubling down on political and business types and actors who tend to be more issues-focused, like George Clooney.

On September 8, Colbert’s debut, Late Show has Jeb Bush and Clooney while The Tonight Show’s guests include actor Richard Gere and entertainment personality and fashion designer Jessica Simpson and New Zealand-born country music singer and American Idol judge Keith Urban. Which lineup is more entertaining may be a toss-up, but many ad execs expect the night to go to Colbert because it’s his first.

Then, there’s September 11 when Comedy Central star Amy Schumer and author Stephen King are facing off against Trump, Pharrell Williams and Empire’s Terence Howard on The Tonight Show. Although the first week should be Colbert’s, some ad execs told Fortune that the strength of Fallon’s lineup may hurt the new host.

In Week 2, Colbert has snagged Vice President Joe Biden, who some have speculated may use the appearance as an opportunity to declare his candidacy for president—or shoot the idea down. Either would get Colbert a lot of buzz. He also has another Democratic hopeful that week, Bernie Sanders.

Not everyone is so skeptical about Colbert’s choices for guests. Maureen Ryan, the television critic for The Huffington Post, sees Colbert as wisely avoiding the head-to-head competition over the latest hot name, depending instead on his congenial, but at times almost ruthless interview style as well as his substantial grounding in improvisational comedy.

“You saw at the White House Correspondent’s Dinner that Colbert just isn’t afraid to say or ask anything,” Ryan says, referring to Colbert’s notorious 2006 skewering of George W. Bush. “I don’t think Colbert will get his following with big-name guests. People will watch because you never know what to expect from the guy. He can get sparks to fly, whether in a funny way or a newsworthy way, and his audience doesn’t want to miss that.

Maybe people will even wish it had been Colbert doing the grilling. Either way, Ryan says Colbert is unlikely to win the competition right out of the gate. He will have to build his audience, just as he did for The Colbert Report, she suggests.

“You can’t think of a better scenario than having Stephen Colbert host during primary season in an election year,” Dentsu Aegis’ Gold says. “The fear is maybe he’s going too intellectual. Fallon, for instance, is a little school kid who’s excited about meeting everyone who comes on his show. Everyone agrees to appear in one of [Fallon’s] goofy skits, and they all end up going viral on social the next day.”

Colbert also has had his triumphs on social media, including an inspired segment on Monroe, Michigan Public Access Television in June. It was not actively promoted by CBS but still managed to garner almost 4 million views on YouTube.

Another thing going for Colbert is the savvy way he has been promoted by CBS, including a now infamous promo spot with Mitt Romney looking for the pancakes he was promised to appear.

“There will be a certain amount of discomfort that both [Colbert] and his audience are going to have to go through until he establishes his new voice,” MediaPost’s Lippert notes. “Colbert is more likely to be an acquired taste.”