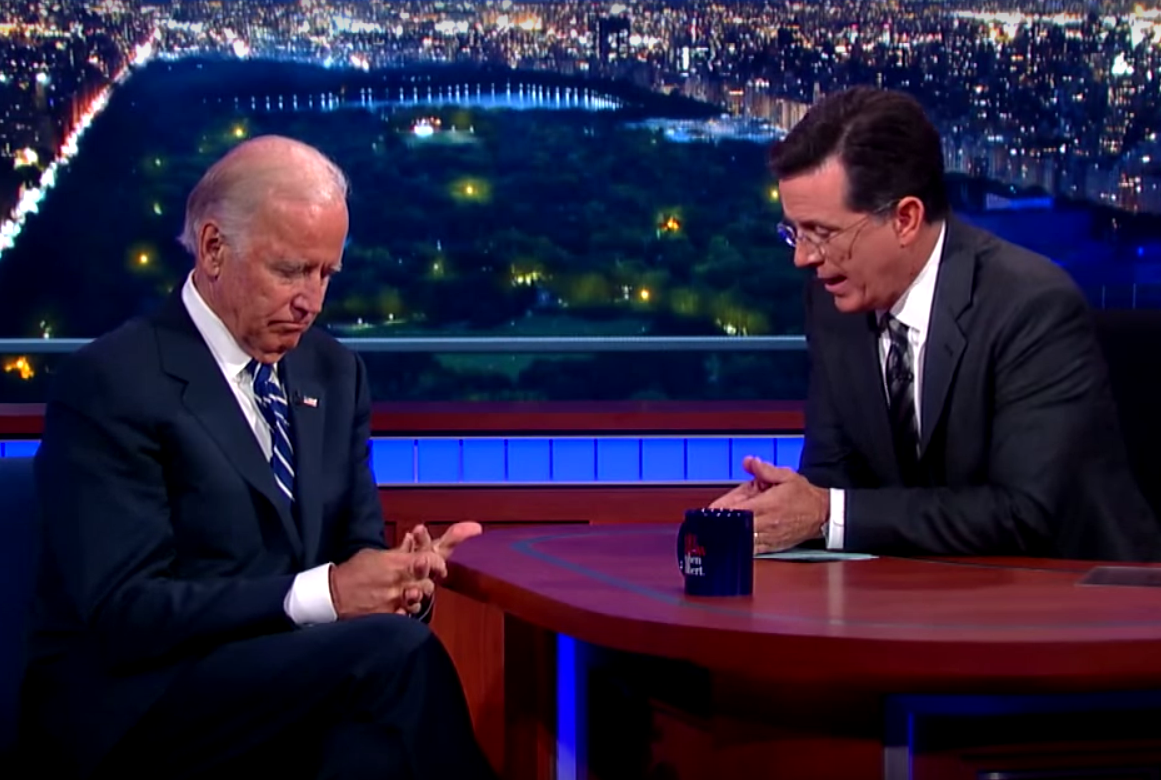 Traditional television is being hammered from all sides: Even hit shows draw smaller audiences, cord-cutting is rampant, and TV stocks keep getting torpedoed by worried investors. But even in this age of the tweeted video clip and million-dollar Periscope celebrities, old-fashioned TV can still have tremendous power, and Stephen Colbert’s interview with Vice President Joe Biden proved that in spades on Thursday.

Colbert, formerly known for playing a right-wing caricature on Jon Stewart’s hit show and then later his own program, has started a new gig as host of the revamped Late Show, replacing former host David Letterman. He has had a series of high-profile guests, including Biden and Uber founder Travis Kalanick.

For the most part, Colbert’s shtick has been the typical kind of goofy, wise-cracking stuff he and Stewart are both known for, but the Biden interview was very different, for both host and guest. When the subject turned to the losses Biden has suffered (his son Beau died recently of cancer and his first wife and daughter previously died in a car accident) the vice-president became increasingly emotional, and Colbert also showed a very human side of him that most viewers probably haven’t seen.

In the wake of the interview, there was an outpouring of emotion on Twitter and elsewhere about the conversation: How it was unlike anything else on TV—how it showed the vice-president’s humanity, how Colbert handled it not like a typical talk-show host looking for the best sound clip, but like a real person, with sympathy and tact.

This @vp Biden interview on @colbertlateshow is unreal. Never seen anything like it on TV.

Colbert​ and Biden​ talking about their experiences with grief is one of the best things I've seen on late night: http://t.co/qX5pASw6D2

That Biden interview was one of the most significant, grace-filled, things I've ever seen on Network TV. #ColbertLateShow

It wasn’t just powerful television, either. Because of the influence that such shows can still have over political culture and the popular zeitgeist, the Biden interview may actually help boost a potential presidential campaign for the vice-president, if he in fact wishes to have one.

Some of the power of the interview, of course, comes not just from it airing at a specific time on network TV, but from clips being shared on Twitter and Facebook and YouTube and elsewhere, which is the nature of modern content. In the hours following the show, it was like a wave of tweets and retweets and sharing that fanned out from viewers to the rest of the globe, like ripples on a pond.

When it comes to the actual viewer numbers that network TV executives care so much about, Jimmy Fallon’s Tonight Show actually won the evening, with 4.3 million viewers to Colbert’s 3.9 million. But when it comes to the long-term impact of those shows—and the social impact—it feels very much like Colbert won.