The 5 most interesting things from Salesforce’s Dreamforce mega conference 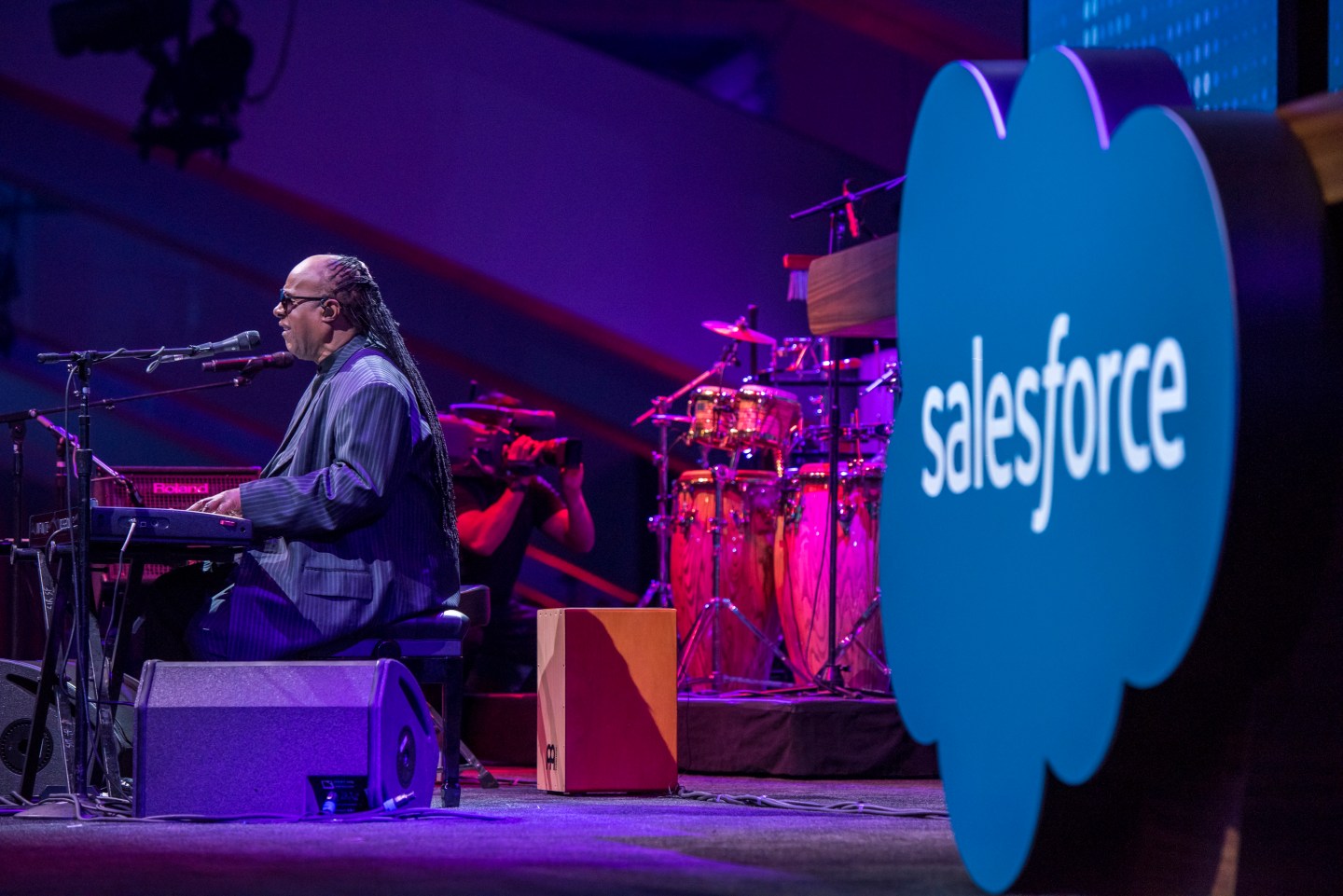 Salesforce’s annual Dreamforce conference came to end on Friday, which means that over 100,000 salespeople and corporate folks will leave San Francisco and help clear out the terrible traffic that plagued downtown. And although the event was essentially one big commercial for the cloud software company, there were several noteworthy items coming out of the conference that highlighted Salesforce’s growth and challenges — not to mention how far the company was willing to go to entertain its guests.

Microsoft’s recent quest to have its executives appear at as many tech conferences as possible continued with CEO Satya Nadella showing up on stage at Dreamforce. During a fireside chat, Nadella talked about how salespeople can use Microsoft software like Outlook with Salesforce’s software to manage customer accounts. What was most surprising was that he kicked off a demo using an Apple iPhone and not a Windows Phone.

“It’s not my phone, but it is an iPhone,” Nadella joked to the crowd. Although Nadella was conducting a demo on a rival company’s device, he managed to take a little swipe at Apple (AAPL), which also recently invited Microsoft (MSFT) to its own conference.

“I’d like to call it the iPhone Pro because it has all the Microsoft software on it,” Nadella said as the crowd laughed. The joke is that Apple’s new iPad Pro for businesses mimics many capabilities of Microsoft’s own Surface Pro tablet, including having an optional stylus pen and keyboard. Apple may want more companies to buy its products, but Microsoft is there to remind them that it’s still ahead when it comes to selling to businesses.

2. Salesforce eyes the Internet of things

Like so many companies nowadays, Salesforce sees a big business in the Internet of things, a tech category involving devices like cars and toothbrushes connecting to the web. At Dreamforce, Salesforce announced a new cloud service for the Internet of things, and showed off its new customers including Microsoft, Cisco (CSCO), and Western Union (WU).

Electrical giant Emerson (EMR), a pilot customer of the Internet of things cloud, is exploring the use of the service to contact customers who may have problems with their connected thermostats. Instead of waiting for customers to call when something goes wrong, Salesforce’s cloud helps Emerson learn about their problems proactively so that it can lend a hand before the phone rings.

3. Is Salesforce built on too many different technologies?

Tech publication The Information posted an interesting article explaining the risks involved with Salesforce’s technology being pieced together from the proprietary technology of others. For example, Salesforce uses Oracle databases technology to help power its own infrastructure, a fact that Oracle’s pugnacious executive chairman Larry Ellison loves to point out. Of course, Oracle (ORCL) could always play hardball and jack up the price.

Fortune’s Barb Darrow explains that because Salesforce is so reliant on proprietary software from others, it’s looking at open-source alternatives to avoid being locked into software from its rivals like Oracle and SAP (SAP).

If you’re responsible for inviting over 100,000 people to San Francisco, you got to keep them entertained. For that, Salesforce laid out what seemed like miles of AstroTurf and set up a tiny amusement park in the middle of San Francisco’s Moscone convention center.

There, attendees could play carnival games, listen to live music, play a giant game of chess, and frolic with Salesforce’s mascot, SaaSy. Salesforce also scattered DJs all over the event, because “Uptown Funk” needs to be heard everywhere.

Oh, and Salesforce chartered a giant cruise ship to accommodate attendees who didn’t want to crash at a hotel.

5. Stevie Wonder tries to get salespeople to scat

It wouldn’t be a tech conference if there wasn’t a well-known musical act to perform for the guests (and presumably collect a big paycheck). Legendary singer Stevie Wonder kicked off the Dreamforce keynote session by singing some classics — to the crowd’s surprise.

He even attempted to lead the crowd in an impromptu scat, which led to hundreds of normally sedate salespeople croaking out nonsensical but syncopated phrases like “na na na na na na” and “Ooopa ooopa ooopa.”

Although the crowd was having a hard time keeping up with Wonder’s phrasing and timing, they appeared to be having a good time hearing the songwriter play snippets from early in his career.

For more on Salesforce, check out the following Fortune video: