Obama’s Africa trip is all about trade, investment, and tech 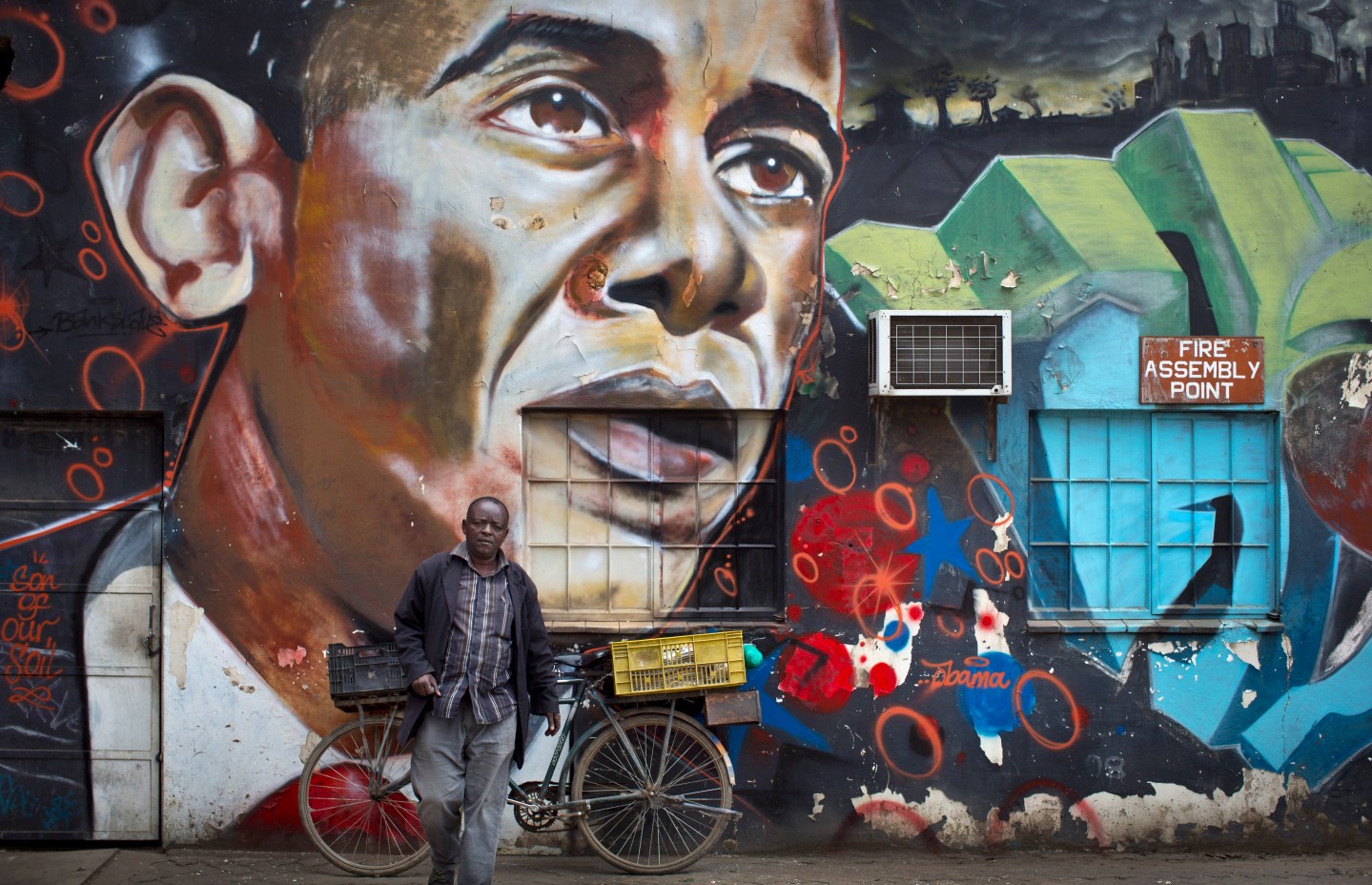 A mural of President Barack Obama at the GoDown Arts Centre in Nairobi, Kenya
Photograph by Ben Curtis — AP

When President Obama visits Kenya and Ethiopia this week, his agenda will include many issues, such as regional security and human rights. But a dominant focus of the President and his delegation will be expanding business and enterprise in Africa, as he hosts the Global Entrepreneurship Summit (GES) in Nairobi, bringing along over 200 U.S. investors.

“A priority of President Obama, and a goal of the Summit, is exporting U.S. expertise in entrepreneurship and innovation abroad,” says U.S. Secretary of Commerce Penny Pritzker.

GES, a U.S. government sponsored forum, aims to foster business leaders in frontier and emerging markets. It also enlists notable Americans as entrepreneurship ambassadors—among them Internet pioneer Steve Case, Shark Tank’s Daymond John, and AirBnB founder Brian Chesky, all of whom will be in Kenya with Pritzker and the President to mentor young African entrepreneurs on attracting capital, managing risk, and launching new ventures.

These days business, entrepreneurship, and investment are active themes across Sub-Saharan Africa. Previously one of the world’s most economically marginalized areas, the region has been connecting rapidly to international markets as it gains credibility with global investors on the hunt for new opportunities.

After a decade of rapid economic growth, a fast-rising African consumer class is expected to wield over $1 trillion in annual spending power by 2020. Foreign aid in Africa is being overshadowed by record increases in foreign direct investment, up 42% between 2008 and 2014, to $55 billion. Over the last two years, countries such as Nigeria, Kenya, and Ethiopia have gained sovereign credit ratings and issued global government bonds now included in the portfolios of funds like PIMCO. And Africa’s stock markets are capitalizing and digitizing, as many of them partner with exchanges such as NASDAQ to adopt the latest trading platforms.

“Just about anything GE does—health care, power, transportation—is finding an opportunity in Africa,” says GE Africa CEO Jay Ireland, who will participate in GES this week. “We’ve grown our employee base in Africa threefold, continued to invest $2 billion in Africa, and over the last three years doubled our revenues on the continent to about $3.2 billion.”

A major area attracting talent and U.S. investment is Africa’s emerging tech sector, which is most strongly associated with Kenya. The East African nation of 44 million has become the continent’s unofficial tech capital, dubbed “Silicon Savannah” for its advances in mobile money, tech incubators such as iHub, and local IT innovations such as the Ushahidi crowdsourcing platform and solar powered BRCK mobile Wi-Fi device that are finding applications in the U.S.

Kenya’s tech status has inspired a startup boom across the continent, led by many young African entrepreneurs with strong U.S. ties who are connecting ventures to American investment. iHub co-founders Juliana Rotich and David Kobia both studied and worked in the U.S., and their BRCK venture has received funding from Steve Case. The founders of all three of Africa’s most highly funded ecommerce ventures—Jumia, Konga, and MallforAfrica—earned degrees from American Universities before attracting millions in U.S. investment. Today MallforAfrica employs more than a dozen workers at a processing center near Portland, Oregon as it sells the goods of U.S. partners Macy’s and BestBuy to Africa’s growing middle class.

Trade and investment themes will also ring strongly in Ethiopia, the second stop on the President’s trip, where he will address the African Union. The country has been one of the continent’s first to attract light manufacturing and assembly away from Asia (H&M has shifted production there), while entrepreneurs such as Bethlehem Tilahun Alemu, founder of footwear maker soleRebels, recently opened a store in Silicon Valley.

While the president’s Africa trip is unlikely to bring announcements of major new commercial policy initiatives or legislation (most of those already occurred at 2014’s U.S.-Africa Leaders Summit and with recent African trade legislation renewal), it could seal a permanent shift in the priority of trade and investment, among other topics, in U.S.-Africa relations.

“There has been an evolution with many of our policy initiatives,” says Commerce Secretary Pritzker. “The president would like to see the relationships with Africa evolve from aid to more trade. And that’s why we’ve placed such an emphasis on entrepreneurship.”