Why Africa may be on the verge of an Internet boom 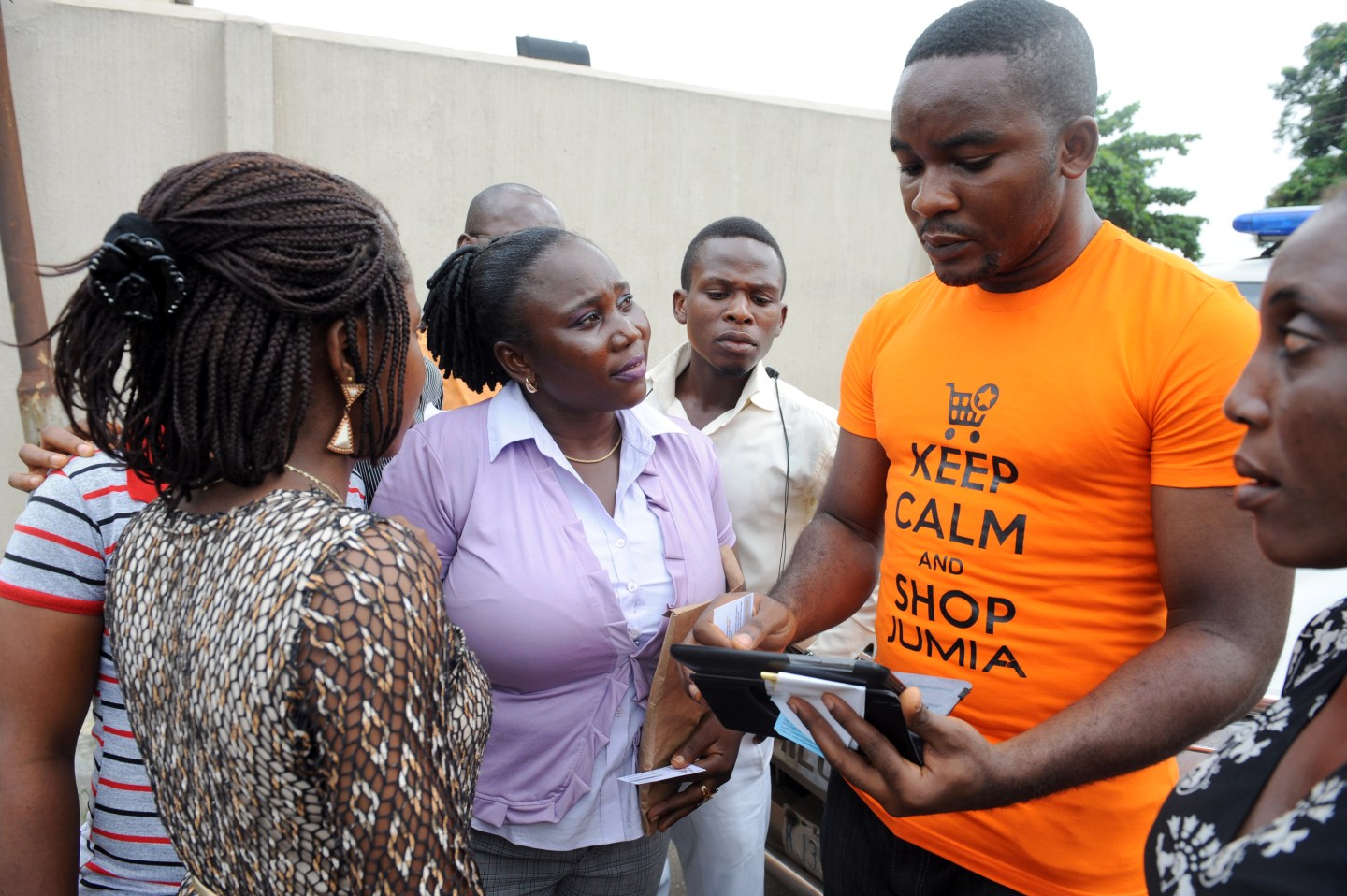 A Jumia saleman tries to market products to bystanders in Lagos on June 12, 2013. JUMIA is a Nigerian based online retail company, where customers purchase their electronics, books, phones, DVDs and other choice products and have them shipped directly to their homes or offices with several payment options to choose from. JUMIA, the fourth largest Nigerian website, which recently turned one years old have hit over half a million customers in the country. Jumia is funded by Rocket Internet, a Germany based Internet incubators globally responsible for starting market leading e-commerce companies. AFPPHOTO/PIUS UTOMI EKPEI (Photo credit should read PIUS UTOMI EKPEI/AFP/Getty Images)
Photograph by Pius Utomi Ekpei — AFP/Getty Images

At a processing center outside of Portland, Oregon, Christine Wigham preps boxes of Brooks Brothers dress shoes and Macy’s (M) handbags for shipment to Nigeria. She is one of 15 U.S. employees working for Mall for Africa, an e-commerce startup that sells American products to Nigeria’s growing middle- and upper-class consumers.

Founded by Nigerian-born brothers, Chris and Tope Folayan, in 2011, Mall for Africa racked up $17 million in sales in 2014, partnering with U.S. retailers like Barney’s, Bloomingdales, and Best Buy (BBY). They’re not the only e-commerce startups focused on Nigeria. Jumia and Konga also are trying to master the maiden market with digital platforms that could scale to Africa’s rising consumers. Collectively backed by over $300 million in VC funding, the venture that overcomes Nigeria’s business challenges and brings in big sales could create the continent’s first big tech headlines.

Due to a decade of rapid economic growth in Africa, consumer spending is estimated to exceed $1 trillion annually by 2020–$400 billion of it already occurring in Nigeria, according to McKinsey’s Global Institute. Meeting the demands of these newly-empowered shoppers, whose wants are outpacing Africa’s traditional marketplaces, will generate some $75 billion in ecommerce revenue by 2025, McKinsey estimates.

Along with Africa’s greater discretionary spending, its populations are urbanizing, IT infrastructure is improving, and the continent’s smartphone penetration is rising.

“The energy is already out there,” said Sim Shagaya, CEO of Konga, which was founded in 2012. “Africa does not lack an abundance of people to buy things, sell things, or move them around. What Africa lacks is a 21st century operating system to make it all work.”

Coincidentally, Konga, Mall for Africa and Jumia’s roots weave paths through the U.S. and Europe before circling back to Africa. The Folayan brothers were born in Nigeria and educated in the U.S. (Tope at Stanford, Chris at San Jose State). Jumia’s first CEOs Tunde Kehinde and Raphael Afaedor earned Harvard MBAs before co-founding the company in 2012 with funding from German incubator, Rocket Internet.

The same year Sim Shagaya, 39, launched Konga with capital from Swedish investment firm Kinnevik. Born in Nigeria, he earned degrees from Dartmouth and Harvard Business School before holding positions in banking, American IT, and as Google’s first Africa representative.

While Mall for Africa caters to a niche digital market, the contest for e-commerce scale is occurring between Konga and Jumia. Jumia has received $200 million in funding; it operates in 8 countries. Konga is not far behind, with $100 million in VC funding and plans to expand outside of Nigeria this year.

Jumia and Konga CEOs play down suggestions they are in competition, though they both bill their companies as “Number one” and “Largest Online Mall” in ads. “They are clearly competing,” says Bankole Oluwafemi, editor of TechCabal, a site that covers the African tech sector.

Given the nascence of Nigeria’s tech sector, it’s hard to say which company is dominating. For online traffic, Jumia ranks sixth and Konga seventh in a list of top-visited Nigerian sites. Konga has yet to release financials but claims revenues grew 450 percent in 2014. Per Rocket Internet’s 2014 public listing, Jumia had $28 million in net revenues, with $32 million in losses.

“Everyone talks about profitability, but these guys are in the very early innings,” said Eghosa Omoigui, Founding Partner of EchoVC, a Silicon Valley fund investing in African startups. “For now, Konga and Jumia need to build their digital marketplace infrastructure, master their logistics, and establish compelling brand value. It’s going to be expensive and take time. Whoever’s recurrently generating the highest gross merchandise value will lead.”

Jumia’s management is strongly linked to stakeholder Rocket Internet through parent Africa Internet Group, a Rocket subsidiary overseeing Africa investments. Konga’s Shagaya, on the other hand, says the company has a “laissez-faire relationship” with investors.

Shagaya views Konga “less as online retail” and more “a digital platform to get entities trading,” he said. “What’s going to dominate the African ecommerce reality is millions of SMEs [small- and medium-sized enterprises] trading in countries and across borders. Our future operating system will be some kind of hybrid of Ebay, Uber, and Paypal.”

In predicting a market leader, TechCabal’s Oluwafemi points to both Jumia’s model and Shagaya’s charismatic personality. “Jumia is running on a brilliant business model conceived by people who are brilliant in their own right. They’ve brought it to Africa with tremendous resources and partnerships. It would be a mistake to underestimate them,” he said.

“But if I had to put my money down I’d lean toward Konga simply because of Sim Shagaya. As far as tech entrepreneurs go, he’s like the Steve Jobs of Nigeria. Not just in his ability to determine what’s right and execute, but also to convince employees, potential partners, and investors.”

For Africa’s ecommerce pioneers, Nigeria offers upsides and challenges. The most populous nation on the continent, Nigeria has record foreign investment, high GDP growth, and surpassed South Africa as the largest economy in 2014. But Nigeria also has frequent power outages, poor roads, an outdated postal system, and less than 10 percent broadband penetration.

And, there are the country’s serious political and security challenges.

“It’s not for all companies. You must be patient and passionate about Nigeria with a commitment to the long-term to be here,” said Jumia’s Poignonnec.

The country has been rocked by a series of events. Last February, Nigeria’s president fired the central bank governor Lamido Sanusi after he blew the whistle on $20 billion in missing state oil revenue. Then, Northern militant group Boko Haram shocked the world with the kidnapping of several hundred school girls. The country’s February 15 presidential election was delayed for six weeks, the government citing security concerns. Whomever is elected faces a protracted conflict quelling Boko Haram in the North.

“In ways, the country’s challenges create the opportunities,” said Konga’s Sim Shagaya. “But there are some problems that you can’t get away from, like $20 billion missing or hundreds of girls kidnapped. The common denominator in all this is corruption. Nigerians have reached a point where they are exhausted with it. There’s a sense in the country that it must stop.”

Both Shagaya and Mall for Africa’s Folyan allude to a sense of patriotic capitalism in running startups in Nigeria. “Entrepreneurs like me are going back because we love the country,” said Folyan. “We know it has more potential than where it is now. Creating jobs and successful 21st century ventures will serve that.” Shagaya notes, “We will make money, but in doing so, we will also fix problems.”

However it plays out, “what’s happening with Konga and Jumia in Nigeria is a precursor for African tech,” said EchoVC’s Omoiugui. “Following their lead, you’ll definitely see greater VC funding to the continent. And don’t be surprised by exits, acquisitions, and IPOs in Africa’s not so distant tech future.”