This ad-tech startup mobilizes brands, one emoji keyboard at a time 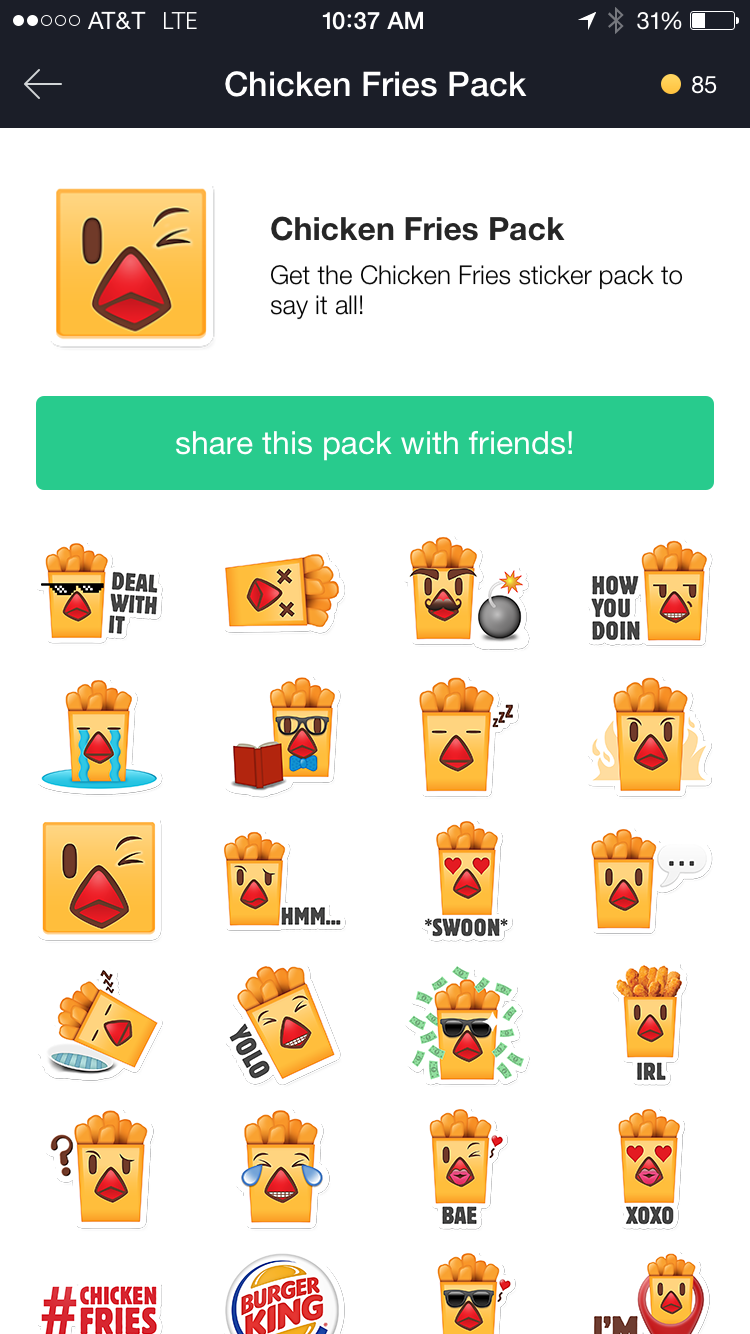 Mobile messaging apps continue to grow at a furious pace. Exhibit A: WhatsApp last week boasted it has reached 800 million active monthly users. It is on pace to break 1 billion by the end of this year.

Snaps, an ad-tech company in New York, wants to help marketers insert themselves into the billions of daily conversations taking place on WhatsApp and other messaging services, such as Kik, Kanvas and other third-party apps.

The quandary: how to do this without leaving a negative impression for being intrusive? The Snaps teams proposes to help brands tell their stories through customized emoji keyboards and stickers, like the one (pictured) for Burger King’s off-again, on-again Chicken Fries menu item.

“It is a self-selecting, opt-in experience,” said Snaps founder Vivian Rosenthal. That’s because someone has to download one of the branded keyboards to start sending specific emoji, stickers and other visual content.

“The language of the future is really a visually driven language,” Rosenthal said.

Snaps started out as a consumer mobile app in 2013, but switched its focus to brand-enablement last year. Even though that platform has been around officially for only a few months, Snaps is working actively with 16 brands including Burger King, Victoria’s Secret and Sony Pictures Entertainment. So far, it has forged distribution relationships with several messaging services, including Kik and Kanvas, but its keyboards worth with WhatsApp and other apps. Snaps figures that collectively, its platform reaches 400 million monthly active users.

That momentum helped Snaps close a $6.5 million Series A round of venture financing in mid-April. The investors include several digital media entrepreneurs who sold their own startups to the likes of Google, Nielsen, Salesforce, and Yahoo. Among them, Buddy Media founder Jeff Ragovin.

“There is a huge opportunity for Snaps to build for messaging apps what Buddy Media did for social,” he said, commenting on the investment. “As consumers shift into smaller groups in messaging, there is an opening for brands to create new experiences that will make them a part of these conversations.”

Snaps teamed with Comedy Central earlier this year for a campaign related to the situation comedy “Broad City.” In the first eight weeks, more than 55,000 keyboards were downloaded and installed, and more than 1 million images were sent.

“Engagement was through the roof,” said Snaps CEO Christian Brucculeri. “This is organic engagement at scale.”

Snaps’ strategy echoes that of another player in the mobile advertising space, Swyft Media, which distributes emoji to various messaging services. Future products could include “promoji,” incentive offers or discounts that are redeemable in stores via smartphone.