How one startup is turning emoji into cash 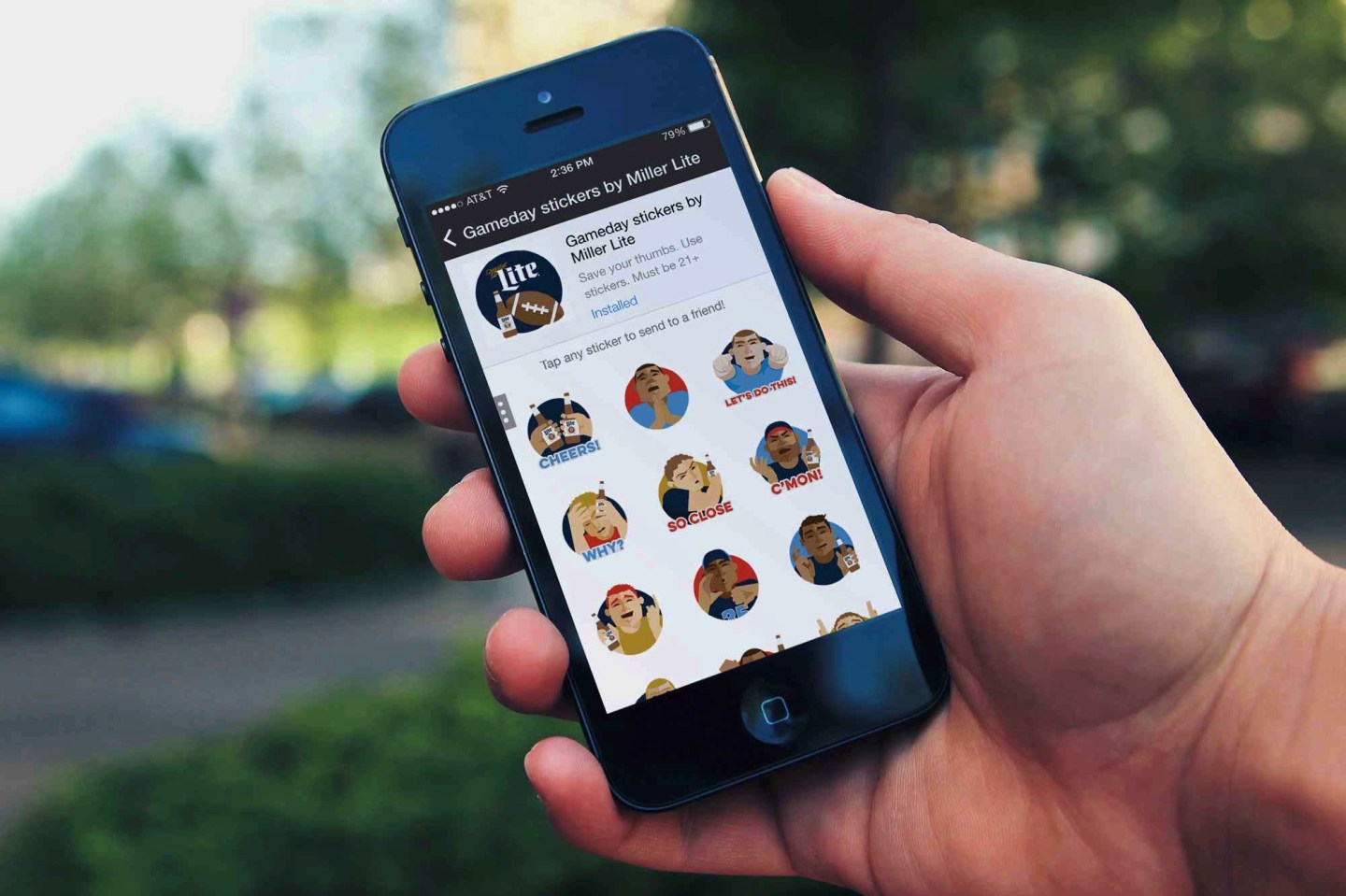 Like any college kid, Evan Wray loved using the tiny pictograms known as emoji. But he hated that there was no emoji to express his Fighting Irish pride with fellow University of Notre Dame students. So, alongside co-founder Sean O’Brien, he built a modest business on that disconnect. TextPride, as it was called, licensed images from brands in the sports and entertainment world and sold them as sticker packs. Within a messaging app like Kik, users could buy a packet of stickers for Disney’s Frozen for $1.99, for example.

TextPride was a fine business, but a tiny one. Meanwhile, the market for messaging apps was exploding. Facebook (FB) bought WhatsApp for $19 billion; that service now has 700 million monthly active users. Tango, an app with 250 million registered users, is worth $1.5 billion. Kik has 200 million registered users. Snapchat, worth $10 billion, has 100 million users. A new study, commissioned by Kik, shows that U.S. users now spend more time on average in messaging apps than they do on social networking apps. The only problem? These messaging apps need ways to make money, and there’s no reasonable way for advertisers to wedge themselves into conversations between friends.

This is a thorny issue that’s unique to messaging apps. We expect ads to live alongside content we consume. We don’t expect them to crop up in our one-on-one communications. “The last thing you want in a personal conversation is a banner ad or pop-up that interrupts that,” Wray says. “It might work with more impersonal networks, but specifically within messaging, people hate traditional ads.”

WhatsApp had been particularly ad-averse before its sale to Facebook. CEO Jan Koum kept a note from co-founder Brian Acton taped to his desk to remind him of the company’s core values. It read: “No Ads! No Games! No Gimmicks!”

So the messaging apps have gotten creative. Tango, for example, inserts ads within a user’s messaging “inbox.” WeChat, a popular Chinese app that is owned by Tencent, makes money through games, stickers (which are similar to emojis), and mobile commerce. Kik offers a feature that some are calling “chatvertising,” where users hold conversations with chat-bots powered by brands like Funny or Die and Moviefone.

Snapchat on Tuesday launched Discover, a section of its app where media outlets including Vice, CNN and People magazine can publish video content within Snapchat. Already several of the channels feature ads, which aren’t cheap. According to Adweek, Snapchat ads cost $750,000 per day.

But back to TextPride. Wray and O’Brien saw the way users eagerly engaged with their branded emojis, and believed advertisers appreciated the convenience of using one vendor to get many different messaging apps. But they realized that that was only half of the business. For certain established brands like sports teams, people will pay for stickers. But other, unknown brands would pay just to be included.

TextPride changed its name to Swyft Media and launched a platform that pushes emojis and stickers from new brands into messaging apps. Brands pay for the privilege, as they would with a regular ad campaign.

A recent example: When Gwen Stefani launched her new album Spark the Fire, Swyft created a free sticker pack and distributed it on several of its messaging apps. It was downloaded almost a million times and sent between users seven million times, resulting in 41 million impressions in 10 days. Such campaigns cost anywhere from $50,000 to $250,000 for brands, Wray says.

The Gwen Stefani campaign ran on several apps, including Tango, the Silicon Valley-based messaging app. Tango earns money on ads within a user’s inbox, but it has adopted Swyft’s platform because the ads are in line with the way people already use Tango, says Richard Rabbat, vice president of Advertising and Platform at Tango. A year ago, Tango decided not to sell stickers, because asking users for money creates too much friction, he says. “Putting a payment gate in the way of communication is not the right experience we want to give to our users,” Rabbat says. Ergo, ad campaigns from Swyft.

Swyft now makes half of its money from ad campaigns like the one for Gwen Stefani. Swyft’s revenue has increased between 50% and 100% each month, Wray says. The other half comes from selling stickers—typically licensed from sports teams and entertainment brands like Shrek.

Swyft works with 50 different messaging partners, including Kakao Talk, Facebook Messenger, BlackBerry Messenger, and Line. The partnerships give the 11-person company access to 2.5 billion registered users. As the strategies for monetizing messaging apps evolve, the young startup has carved out a way for brands to inject themselves into the conversation.