Obama weighs in on Sony hack, calls decision to shelve movie ‘a mistake’ 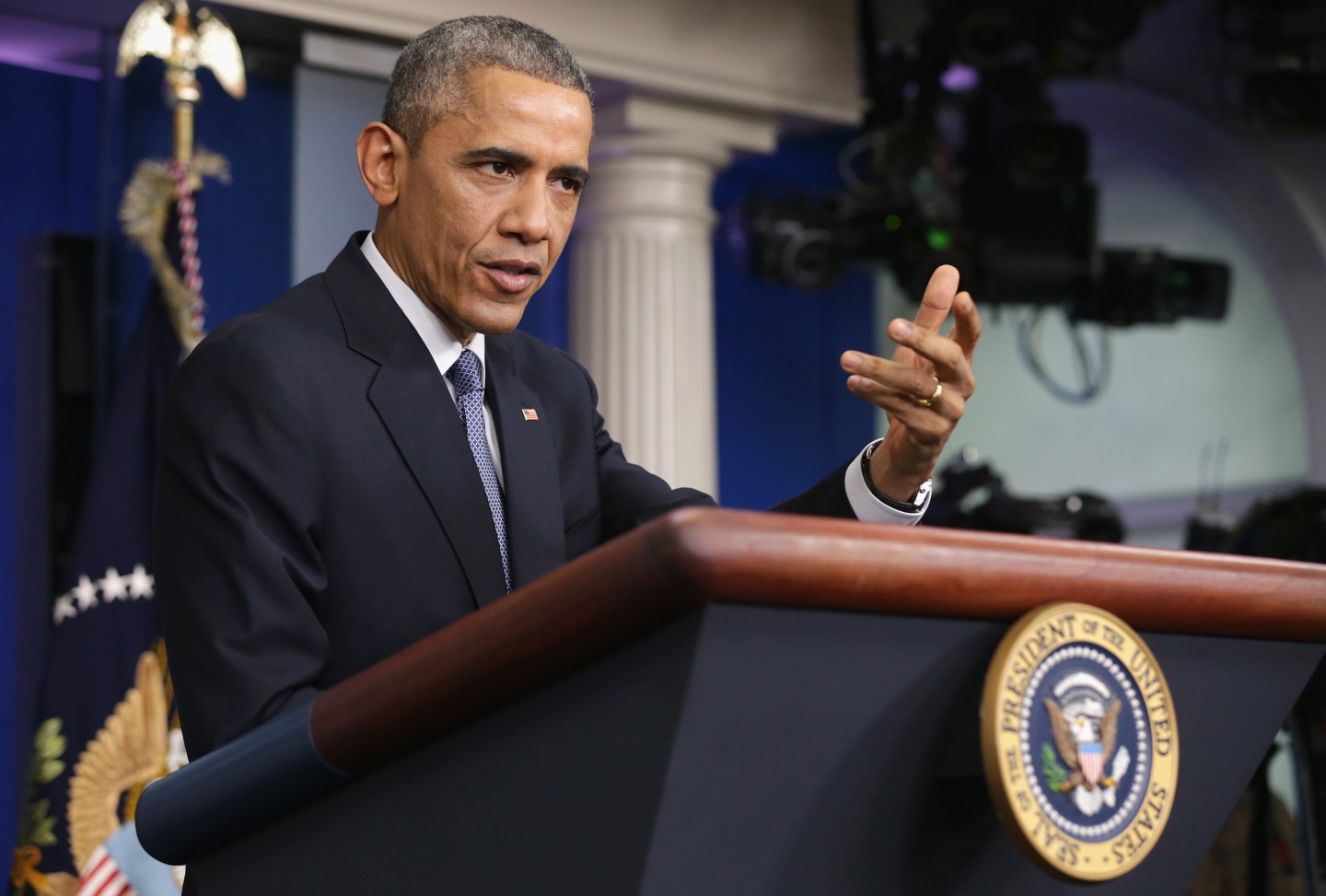 WASHINGTON, DC - DECEMBER 19: U.S. President Barack Obama speaks to members of the media during his last news conference of the year in the James Brady Press Briefing Room of the White House December 19, 2014 in Washington, DC. President Obama faced questions on various topics including the changing of Cuba policy, the Sony hack, and his plan on working with a Republican majority Congress. (Photo by Chip Somodevilla/Getty Images)
Photograph by Chip Somodevilla — Getty Images

President Obama said on Friday that Sony (SNE) Pictures Entertainment “made a mistake” when it decided to cancel plans to release the comedy The Interview next week in the wake of threats from hackers who launched a cyber attack against the company last month.

Speaking to reporters at an end-of-the-year news conference Friday, Obama said the U.S. will respond to the devastating cyberattack on Sony Pictures now that U.S. authorities have linked the strike to the North Korean government.

“They caused a lot of damage. And we will respond,” he said.

The president’s remarks came hours after the Federal Bureau of Investigation formally accused North Korea of backing last month’s debilitating cyber attack against Sony Pictures Entertainment. In a statement, FBI officials said the U.S. investigation into the attack determined North Korea to be the primary culprit with analysis showing that North Korean-developed malware was used in the hack.

In a statement to The Associated Press on Friday, a North Korean diplomat denied the FBI’s accusation but added that The Interview mocked North Korea. “It defamed the image of our country. It made a mockery of our sovereignty. We reject it,” the unnamed diplomat told the AP. “But there is no relation (to the hacking).”

Obama said Friday he is not yet ready to announce the specifics of how the U.S. will react to North Korea’s alleged hack of Sony. He added, though, that he disagrees with Sony’s decision to cancel the release of the The Interview.

“Sony’s a corporation. It suffered significant damage. There were threats against some of its employees,” Obama said “I am sympathetic to the concerns that they faced. Having said all that, yes, I think they made a mistake.”

Sony Pictures Entertainment chief executive and chairman Michael Lynton disputed Obama’s remarks that his studio erred. In an interview on CNN, he said, “In this instance the president, the press and the public are mistaken as to what actually happened.”

Lynton, making his first public remarks since the cyberattack began last month, said Sony had “no alternative” but to pull the screwball comedy about a fictional plot to assassinate North Korean leader Kim Jong Un because movie theater chains said they would not screen the film.

“We have not caved, we have not given in, we have persevered and we have not backed down,” he said. “We have always had every desire to have the American public see this movie.”

Lynton added that he still would like the public to see the film.

Later, Sony issued a statement noting that the company is “strongly committed to the First Amendment” and echoing Lynton’s desire for the public to have an opportunity to watch The Interview. Sony said it “had no choice” but to change its release plans for the film after the nation’s largest movie theater operators decided on Wednesday not to show the film when it was set to be released next week.

“The decision not to move forward with the December 25 theatrical release of The Interview was made as a result of the majority of the nation’s theater owners choosing not to screen the film. This was their decision,” Sony said.

In his press conference, Obama expressed displeasure at the idea of a foreign state influencing decisions related to business and free speech in the U.S. “If somebody is able to intimidate folks out of releasing a satirical movie, imagine what they start doing when they see a documentary that they don’t like, or news reports that they don’t like,” the president said.

With the FBI officially accusing North Korea of perpetrating the hack earlier today, many were hoping Obama would also clarify the exact nature of the U.S. government’s response. On Thursday, the White House called the Sony hack a “serious national security matter” and promised a “proportional response” to the attack. Obama used the latter term again in his press conference on Friday and declined to elaborate on the U.S. government’s plan to respond to the massive hack, which shut down the computer system at Sony Pictures last month.

In the weeks following the attack, the hackers — who refer to themselves as the Guardians of Peace, or GOP — have released a steady stream of sensitive Sony documents, including employees’ personal information, financial data and reams of embarrassing e-mails from executives’ corporate accounts.

On Wednesday, Sony opted to cancel The Interview’s planned opening after the nation’s largest movie theater owners deciding against showing the movie, which is a comedy portraying an assassination attempt against a fictional version of Kim Jong-un. North Korea was initially pegged as a possible source of the attack after the country’s leader, Kim Jong-un, previously expressed outrage over the company’s planned release of the film, with the North Korean leader describing the movie as “an act of war,” but the country has so far denied any involvement in the hack.
[fortune-brightcove videoid=3951025703001]

In its statement earlier in the day, however, the FBI said it found “significant overlap” between the infrastructure of the Sony attack and previous cyber activity the U.S. government has linked to North Korea, including similar IP addresses and coding. Also, some of the tools used in the Sony hack are similar to a cyber attack North Korea apparently carried out last year against South Korean banks and media, the government said.

“We are deeply concerned about the destructive nature of this attack on a private sector entity and the ordinary citizens who worked there,” the agency said in the statement. “Further, North Korea’s attack on [Sony Pictures] reaffirms that cyber threats pose one of the gravest national security dangers to the United States.”

Friday’s formal announcement comes after multiple news outlets cited unnamed Obama administration officials claiming the U.S. government had found North Korea to be “centrally involved” in the hack. Those reports also cited officials claiming that the U.S. government had found a possible link to China, saying that North Korea may have either collaborated with hackers in China or used Chinese servers as part of the attack in order to elude investigations into the origins of the attack.

On Thursday, Sony executives reportedly received an e-mail, supposedly sent by the hackers, which praised their “very wise” decision to call off plans to release The Interview next week.

(This story was updated with additional information from The Associated Press, Reuters, and a statement from Sony)