Workplaces depend on highly sensitive people. Protecting them from burnout is essential for our future 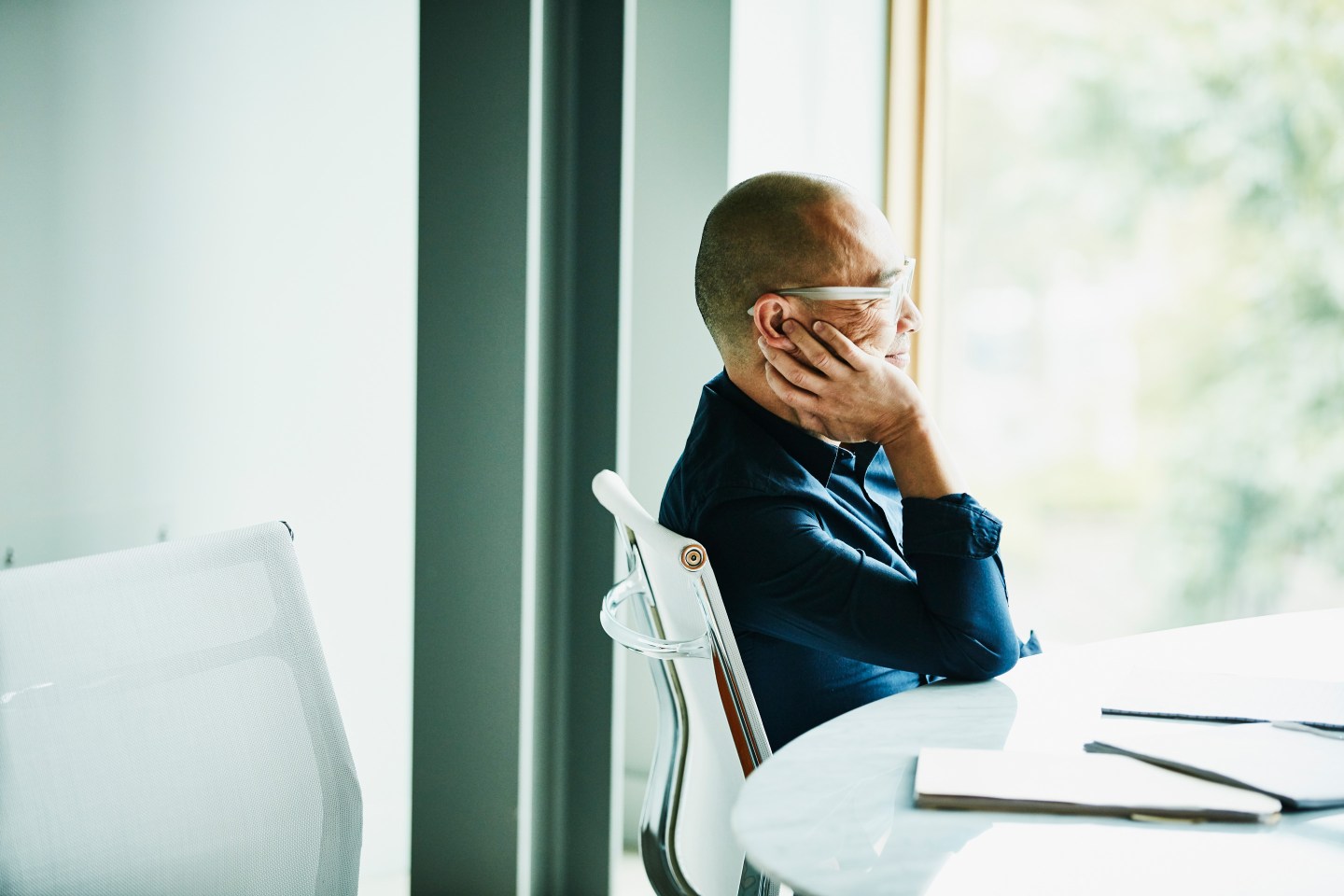 About 20% to 30% of the population identifies as a highly sensitive person (HSP). It’s a relatively common trait, not a condition that comes with an official diagnosis or list of symptoms. If you are one (or know one), you’ll likely recognize the signs in the stories of other HSPs.

Andre Sólo, coauthor of the upcoming book Sensitive: The Hidden Power of the Highly Sensitive Person in a Loud, Fast, Too-Much World and cofounder of the online community Highly Sensitive Refuge, says while sensitivity is a continuum, HSPs spend more of their mental energy taking in their surroundings.

Details are pronounced. Nuances are caught. Emotions are felt deeply. HSPs are prone to overstimulation by other people, sound, light, and visuals.

“I’ve been sensitive my entire life,” he tells Fortune, recalling a time he hid during kindergarten recess because the swarm of people and activities became unbearable.

His response to the overwhelm made him doubt himself.

“You generally get the message in life that you shouldn’t be sensitive or you should hide it. I got that message loud and clear,” Sólo says. “I just thought there was something wrong with me.”

Sólo’s story resonates with me deeply.

I was repeatedly called sensitive growing up. I always took it as an insult, wondered what was wrong with me, and contemplated how to get thicker skin.

When my elementary school teacher grimaced, I worried I had done something terrible. When my sister and brother were upset or heartbroken, I felt the pain as if it was my own. When I made mistakes at work, I internalized them.

People who are highly sensitive have an active nervous system that reacts more strongly to external stimuli.

“You might be the kind of person who notices those notes of oak in a fine Chardonnay. You might notice the texture of the fabric you’re wearing,” Sólo says. “You notice the little smile that flashed across someone’s face for a half second before they conceal it, or you notice that somebody is doing their best to put on a brave face, but they actually seem like they might be pretty unhappy or stressed out.”

While most (70%) of HSPs are introverts, there’s a difference between the two traits. Introverts are overwhelmed by social stimuli, but HSPs can be affected by all types of stimuli.

“Sensitive people are wired at a brain level to process information more deeply, to spend more resources on processing,” Sólo says. “We end up just noticing small details and making connections that other people manage to miss.”

That process can be draining.

Julie Bjelland, host of The HSP Podcast and author of The Empowered Highly Sensitive Person: How to Harness Your Sensitivity Into Strength in a Chaotic World, likens the HSP brain to a computer with too many tabs open. “If it’s processing too much it’s going to freeze,” she says. “That can happen with us too where we lose focus, we lose creativity, [and] we lose energy.”

It wasn’t until I learned more about sensitivity that I understood this was a personality trait, not a character flaw—one that could also be a strength in my professional life.

HSPs care about doing good work but may feel overwhelmed by constant meetings and engagements. Some may work better when they can focus alone. Others overthink interactions, noticing subtle expressions or undertones of email exchanges in a performance review with a manager, for example. They can be self-critical and feel emotional in the workplace.

For me, it can be easy to go down a rabbit hole of what someone meant by an email or Slack message (this is called cognitive distortions which aren’t based in fact).

It’s led me to see this trait as a weakness and want to hide it.

But being acutely aware of one’s surroundings makes HSPs valuable work partners, leaders, and mentors, Bjelland tells Fortune. They tend to be high performers, creative, innovative, and integral to a team. They can pick up on meeting details that may have otherwise gone unnoticed.

A 2016 study found a connection between sensitivity and overexcitability or having more heightened sensual, imaginational, and intellectual abilities. HSPs’ overactive brain provides them with natural empathy, awareness, and the ability to take action. They have a curious and innovative mind crucial for team projects. Understanding others more deeply allows them to lead with compassion and patience, Bjelland says.

However, this level of awareness can make HSPs easily susceptible to burnout, which can lead to chronic stress and put people at risk for heart disease, among other problems.

So, how can you thrive in the workplace as an HSP?

Whether you react sensitively to crowded rooms or overthink in competitive environments, recognizing but not criticizing your triggers can feel empowering.

Bjelland says that naming the trait helps separate your thoughts and feelings from your worth. HSPs tend to feel a deep connection to their work and want to do something they feel serves a purpose, she says.

Advocate for yourself in the workplace

Many HSPs work best when they have time to focus deeply. Some thrive in a work-from-home setting, and others may limit meetings and calls during the day to optimize their creative abilities.

“A lot of HSPs struggle to set boundaries because we can see the disappointment in somebody’s face, or we experience that energy and it just feels so uncomfortable that we don’t want to do it,” Bjelland says. “But long term, what we’re really doing is saying no to ourselves over and over again, and that’s not going to work long term.”

Consider telling a manager or colleague, “I do my best work when I can focus without distractions for a period of time. What are the best times during the week for me to schedule that?” Sólo says.

If you’re an HSP, you’re either a perfectionist or a recovering perfectionist, Bjelland says. It’s time to cue self-compassion.

When we begin to judge our abilities in the office because of our sensitivity, acknowledging the feeling first activates the cognitive centers of the brain. It helps alleviate us from immediately judging ourselves for how we feel. It can help us see a thought for what it is and not an issue wrong with our brains.

Highly sensitive people can get caught up in comparisons and think about how other people perform. Healthy competition can motivate us, but obsessive comparison can harm us.

Bjelland challenges you to ask yourself what feels good for you internally versus externally.

“Rather than, ‘Is this working for them or the competitive environment,’ [ask] ‘Do I feel good about this?’ ‘Is this something that I can be contributing to the world or helping in some way?’” she says. “That’s an internal focus, and that’s a really helpful tool to keep bringing it back.”

Choose who gets your energy

Your daily energy is a limited entity. Be more mindful of where your energy is going and how you can use it to benefit you and your team. It might not be helpful to contemplate somebody else’s emotions or hardships if they are taking up too much of your attention and crucial work time.

Bjelland and Sólo say, know when to say no to tasks that feel inauthentic to your day’s work. When asked to add something to your plate, start saying, “I’ll get back to you,” Bjelland says, so you have time to assess whether the task must get done or if you feel pressure to perform.

Everyone thrives when they have time to recharge. HSPs need that to the max. Stepping outside during the workday or taking a quick stroll helps people who always take in constant messages.

For many HSPs, visual cues prompt overstimulation, Bjelland says, so even going to the bathroom and closing your eyes for a few seconds during the workday can help.

While HSPs can feel depleted through stress and overwhelmed in ways other people may not, they can thrive the most in supportive environments.

Knowing this can help HSPs seek out mentorship programs, group bonding activities, and opportunities to work alongside a team. These experiences can bring the best out of an HSP in the workplace, Bjelland says, which helps them and the company’s bottom line.