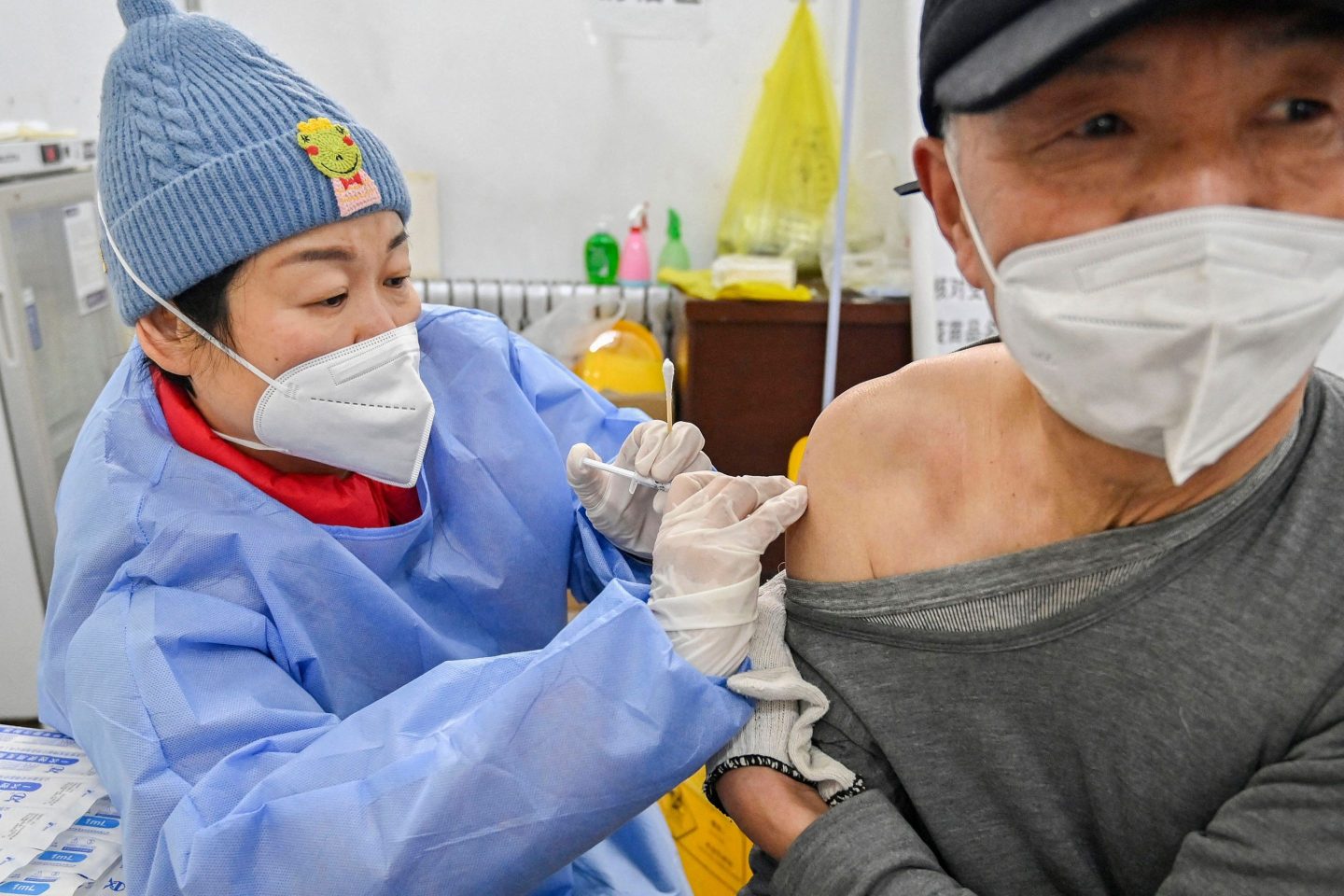 Chinese officials say they have “safe and effective” COVID vaccines, after Beijing rebuffed offers of mRNA shots from the U.S. and Europe.
STR/AFP/Getty Images

Over two years since the first mRNA vaccines were approved in the U.S., China may be inching closer to having its own mRNA shot.

Chinese pharmaceutical company CanSino Biologics said it was in a “test production phase” of its Omicron-targeting mRNA booster in a social media post published Friday.

That announcement followed a filing with the Hong Kong stock exchange, where CanSino reported “positive” data from a trial of its Omicron booster. The pharmaceutical company reported that its booster generated between 23 and 29 times as many antibodies against the BA.5 COVID strain as a vaccine based on an inactivated virus (such as the shots from Sinovac and Sinopharm, both widely used in China).

In its filing, CanSino warned that it might not be able to develop or commercialize its mRNA vaccine. CanSino did not immediately respond to a request for comment.

Health experts outside China argue that the country’s lack of mRNA vaccines is a major impediment to getting its COVID outbreak under control. “The efficacy of the China‑made vaccines is not at the level of the vaccines that have been used in the United States,” Anthony Fauci, the recently retired White House medical adviser, told the Washington Post in early December.

Both the U.S. and the European Union have offered mRNA COVID vaccines to China, but Beijing has rebuffed their requests.

“Practice has proven that the vaccines in our country are safe and effective,” the National Health Commission of China spokesperson told foreign ambassadors on Friday, adding that Chinese vaccines could “protect the health of the Chinese people as well as people in some other countries.”

China has yet to approve any mRNA vaccines for widespread use in the country. The only people in mainland China who can get any mRNA shots are German nationals, who can receive BioNTech’s vaccine under a deal agreed to by Beijing and Berlin. (In September, Indonesia approved an mRNA vaccine from Walvax Biotechnology, becoming the first country to approve a Chinese-developed mRNA shot, ahead of Beijing.)

Mainland Chinese are booking vaccine appointments in the semiautonomous cities of Hong Kong and Macau, which both offer vaccines from BioNTech, including the company’s most recent Omicron booster. Hong Kong residents flocked to vaccination centers over the weekend in a bid to get jabbed before a scheduled reopening of the border between Hong Kong and mainland China on Sunday, reports Bloomberg.

China could be facing as many as 2.5 million cases and over 16,500 deaths a day, according to a model from U.K.-based research firm Airfinity. In late December, one health official estimated that 37 million people may have caught COVID in just one day. Yet cases in major Chinese cities may already be peaking, as subway traffic recovers from late December lows as people feel well or safe enough to return to work.