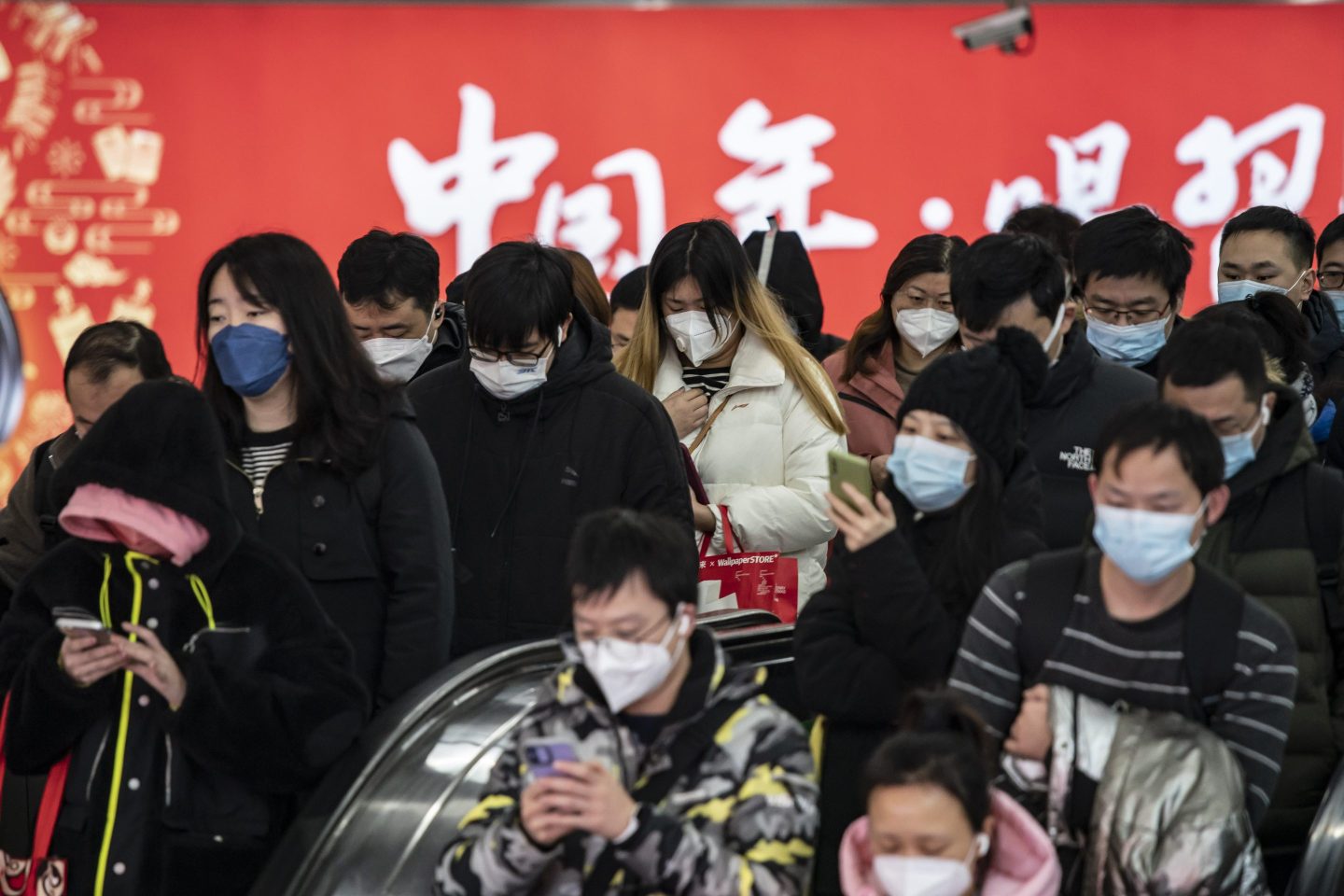 Subway traffic in Chinese cities like Shanghai is starting to recover from mid-December lows, which could imply that the infection peak has passed.
Qilai Shen—Bloomberg/Getty Images

China’s economy slumped at a rapid pace in December as the country battled its worst-ever COVID outbreak. Yet signs that China’s major cities may be passing the peak of infections may mean the worst is over for the economy.

Subway traffic in major economic centers like Shanghai, Guangzhou, and Shenzhen is recovering from lows in mid-December, according to data compiled by Bloomberg. That recovery could imply that people are feeling well enough to return to work. (Chinese officials have started to say that COVID-positive individuals who have mild or no symptoms could return to work so long as they take necessary personal precautions.)

“A more broad-based recovery could start with peak infection,” wrote Yu Xiangrong, chief China economist for Citigroup, in a note on Sunday.

China’s manufacturing and services activity shrank in December. The country’s official manufacturing purchasing managers’ index (PMI) fell to 47.0, down from 48.0 the month before (a number below 50 represents a contraction in activity).

Services shrank at an even faster rate, with the country’s official services PMI falling to 41.6 in December, down from 48.0 the month before. Services activity shrank at the steepest rate since February 2020, near the beginning of the COVID pandemic.

Official government data now suggests that manufacturing and services activity has shrunk for three months in a row.

China’s COVID cases have exploded since then. Chinese data is spotty after the country rolled back testing requirements and stopped including asymptomatic cases in its case counts. Yet even official estimates put the daily case counts at tens of millions each day, with one health official suggesting on Dec. 23 that 37 million people were catching COVID each day.

China has reported only a handful of deaths since it ended its COVID-zero approach, yet funeral homes are reportedly seeing a spike in deaths among COVID patients.

Foreign governments are worried that an uncontrolled outbreak in China may lead to the rise of a more immune-evasive COVID variant.

Some countries are now requiring negative COVID test results from those traveling from China.

Yet a COVID peak in China’s major economic centers could be the turning point for the country’s economy.

Manufacturing may also be starting to recover. Foxconn’s factory in Zhengzhou—one of the most important suppliers of Apple’s most advanced smartphones—is operating at 90% capacity, according to local newspaper Henan Daily. The factory has also returned to its normal staffing level of 200,000 workers.

Apple warned in November that shipments of the most recent iPhone might be delayed owing to COVID disruptions at Foxconn’s plant.

In late November, workers violently clashed with security personnel over frustration with COVID controls and fears of getting infected. (Foxconn has since rolled back many of its controls.) Both Apple and Foxconn are reportedly planning to manufacture some products in neighboring Vietnam.

Chinese President Xi Jinping struck a more modest tone in his New Year’s message over the weekend, while noting the challenges of the country’s COVID pivot. “It has not been an easy journey for anyone,” Xi said, while also sharing that “the light of hope is right in front of us.”