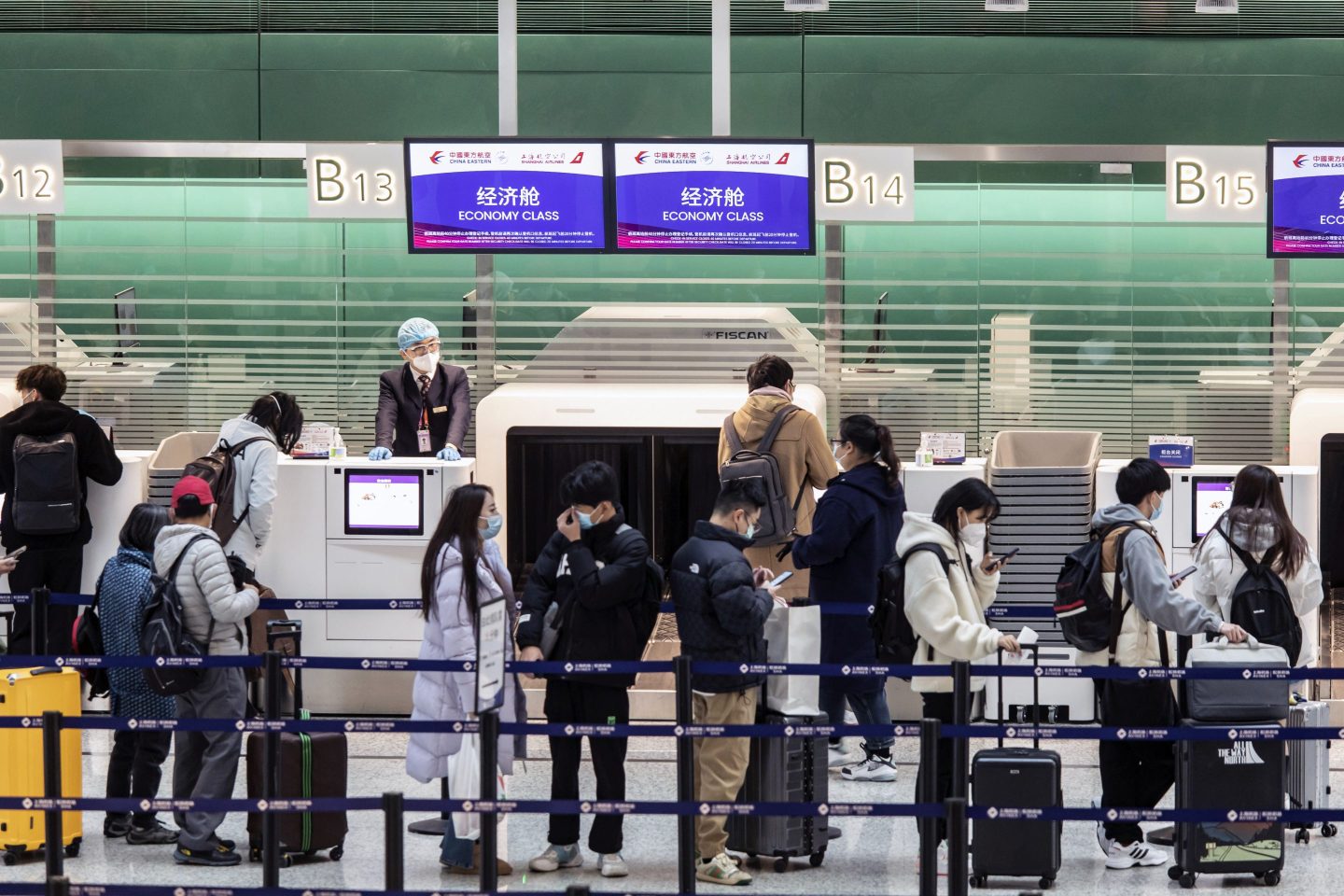 Countries like Japan and the U.S. are worried about the reliability of China's COVID data.
Qilai Shen—Bloomberg via Getty Images

Nations across the globe are implementing or considering measures to test or restrict travelers from China as the country of 1.4 billion abandons its COVID-zero policy and prepares to reopen borders in early January.

The U.S. is considering new coronavirus precautions for people traveling from China amid questions about the transparency of data China is reporting about the spread of the virus, according to American officials, who asked not to be identified discussing internal thinking. Japan moved quickly yesterday to announce steps requiring a negative COVID-19 test upon arrival soon after Beijing said it no longer subject inbound travelers to quarantine from Jan. 8.

China is rapidly dismantling its stringent pandemic measures in the face of discontent with COVID-zero rules, triggering outbreaks across the country. Uncertainty over the true scale of infections without reliable official figures is fueling concern that the rapid spread of the virus could lead to the emergence of new variants.

China is experiencing the world’s largest COVID-19 outbreak, raising concerns among public-health officials worldwide. Almost 37 million people may have been infected with the virus on a single day last week, according to estimates from the government’s top health authority.

Earlier this week, Japanese Prime Minister Fumio Kishida said there are “great discrepancies” in information coming out of the country, fueling growing concern. Japan will require negative COVID-19 test results upon arrival for visitors who have been in mainland China within a seven-day period, while those who test positive will have to quarantine for a week.

The U.S. is weighing similar steps, the officials said, as a way to prevent further spread. Malaysia has also imposed new tracking and surveillance measures. India began random testing of about 2% of passengers arriving from other countries at all international airports a week ago to minimize the risk of any new variant entering the country.

Holiday bookings for outbound flights from mainland China jumped 254% Tuesday morning from the day before, according to Trip.com Group Ltd. data, underscoring how the country’s vast population is ready and hungry for travel. The top five destinations were Singapore, with a 600% increase in bookings, followed by about 400% for South Korea, Hong Kong, Japan and Thailand.

China will start issuing new passports and Hong Kong travel permits to mainland residents, the National Immigration Administration said in an announcement on WeChat late on Monday. Express checkpoints on the borders with Hong Kong and Macau will resume, while applications by foreigners to extend or renew visas will also re-commence as part of the relaxation of measures on Jan. 8.

Taiwan will start testing those arriving from the Chiense mainland as it anticipates tens of thousands of people visiting for the Chinese New Year later in January. Hong Kong, which plans to reopen its borders with China before mid-January, is relaxing its entry rules, announcing on Wednesday a sweeping set of changes that will scrap limits on public gatherings as well as proof of vaccination for entry to some venues, and no longer require inbound travelers to take two PCR tests after their arrival.

Philippine Transport Secretary Jaime Bautista called for COVID measures on Wednesday, including testing on inbound travelers from China. “We should be very cautious because if they have a lot of COVID cases, we should be careful about Chinese visitors coming into the Philippines,” he told reporters.

The new U.S. travel precautions are based on consultations with public health experts and international partners, officials said. They said the talks have been prompted in part by concerns over the lack of genomic sequencing data that could help identify the emergence of a new variant.

Health experts have said they’re worried that the virus’s unabated spread could spawn a dangerous new variant for the first time since the omicron strain caused infections to surge more than a year ago.

GISAID, the global consortium that maintains a database for scientists around the world to share coronavirus sequences to monitor mutations, said on Tuesday that China has ramped up its surveillance amid the ongoing outbreak. All the sequences shared by the Chinese health authorities suggest the viruses fueling the massive nationwide outbreak closely resemble the circulating variants found in the rest of the world since July, they added.