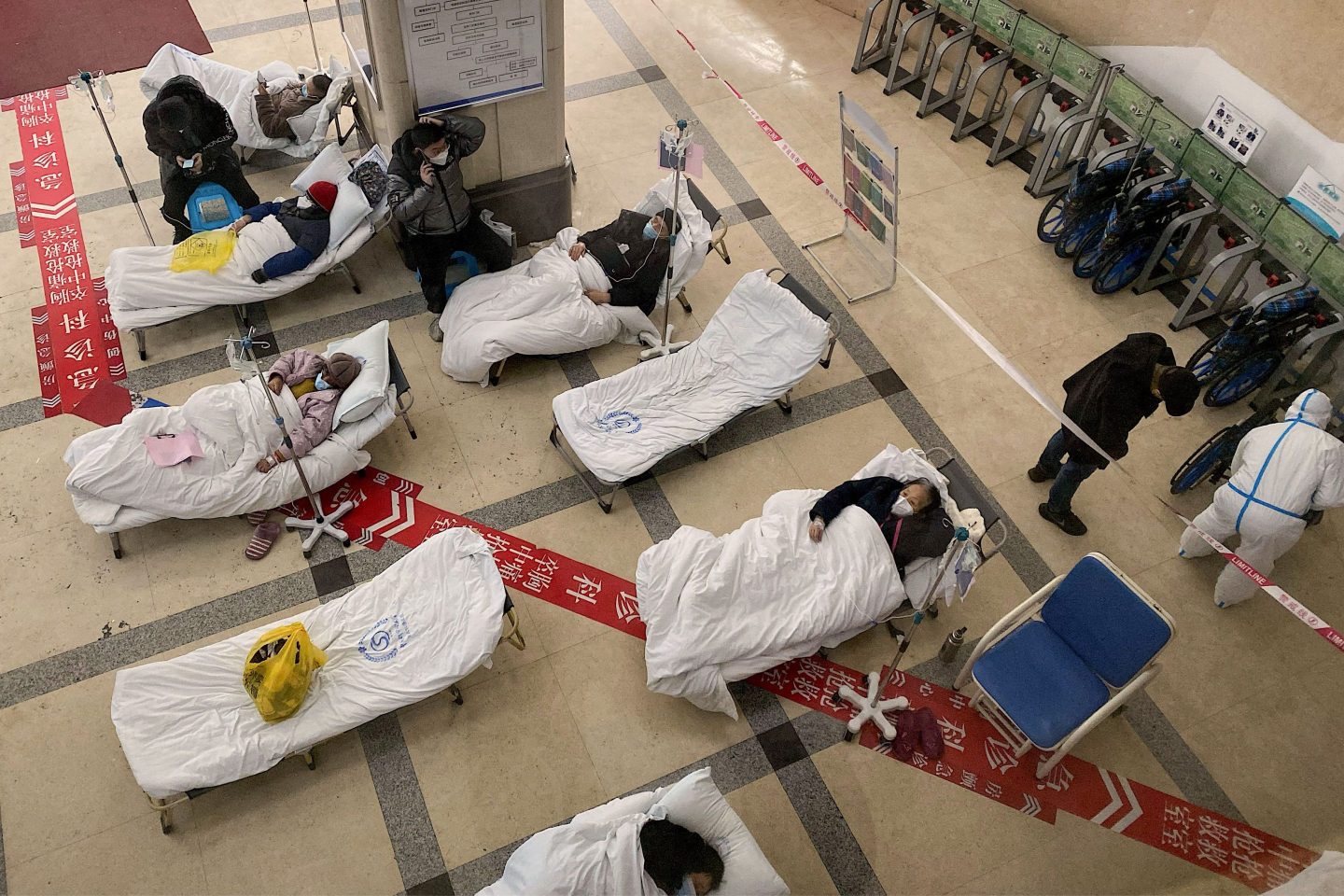 Covid-19 coronavirus patients lie on hospital beds in the lobby of the Chongqing No. 5 People's Hospital in China's southwestern city of Chongqing on Friday.
Noel Celis—AFP/Getty Images

Two Chinese cities reported daily Covid cases that far surpassed the official national tally, in another illustration of the unreliability of data in a country grappling with infections after abruptly ending Covid Zero.

The city of Dongguan in the southern province of Guangdong has 250,000 to 300,000 people being infected on a daily basis, the city’s health commission said on its WeChat account Friday, citing model-based estimates and expert assessments. The manufacturing hub had a population of about 10.5 million as of 2021.

Qingdao city in the eastern province of Shandong is seeing 490,000 to 530,000 daily cases based on data projections, according to a local newspaper report on Friday, citing the head of the city’s health commission. Covid cases have yet to peak in the city of some 10.3 million residents, the official said.

These local estimates show a huge discrepancy with the official tally of only 4,103 cases reported for China for Dec. 23. It also underscores the inaccuracy of government data, and points to the enormous challenge facing the country after its rapid relaxation of Covid rules.

In a further sign of the scale of the outbreak, minutes from an internal meeting of the top health authority Wednesday showed that nearly 37 million people in the nation may have been infected with Covid on a single day. Health officials on the island province of Hainan said Friday that infections are “increasing exponentially” and a further surge of cases is expected into New Year’s Day and the Lunar New Year holiday in January. They didn’t give specific numbers.

Hospitals in major cities including Beijing and Shanghai have been overwhelmed, while crematoriums are struggling to cope. In Dongguan, the health commission said as of Dec. 22, there were 2,528 health care staff still working despite having fever or testing positive for Covid.

While Qingdao’s estimate is not a precise count and possibly off by tens of thousands, such a practice of “seeking truth from facts should be applauded,” setting an example for other cities, according to the former editor of the nationalistic Global Times newspaper Hu Xijin.

Some local governments are still using the old methods of calculation, “which does not reflect reality and seriously deviates from people’s observations, leading to an erosion of trust toward official releases and harm government credibility,” he wrote on his official WeChat account Saturday.

–With assistance from April Ma