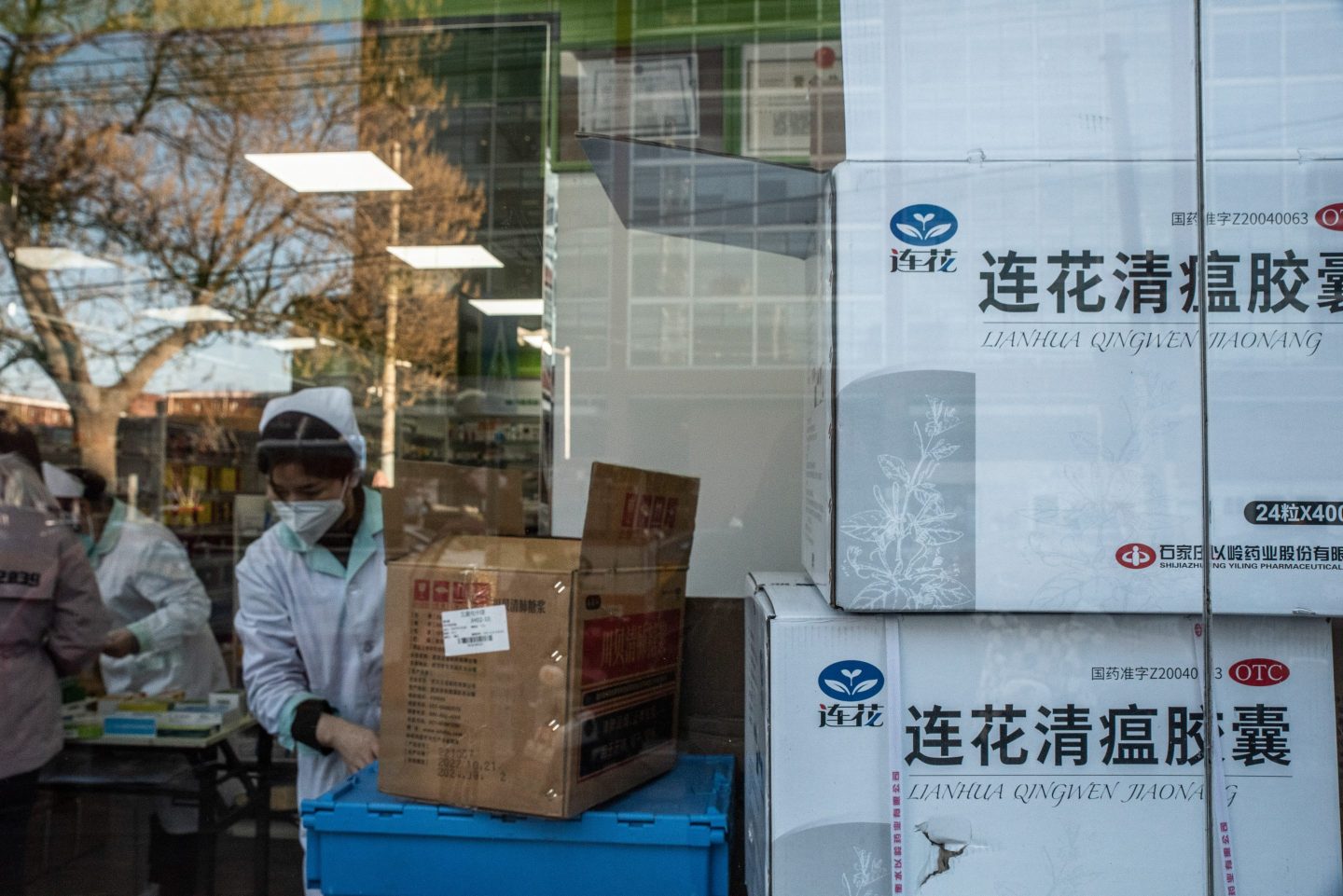 Chinese drugstores are reporting shortages of flu and fever medicine as Chinese worry about a massive surge in COVID cases.
Bloomberg/Getty Images

Chinese officials and companies are letting COVID-positive people return to work in a bid to keep the economy running, despite a massive COVID surge that could be as large as a million cases a day.

Officials in Zhejiang province announced over the weekend that those who test positive for COVID could go to work, so long as they showed no symptoms. Then on Monday, Chongqing, one of China’s largest cities and a major manufacturing hub, went one step further by allowing those with mild symptoms to return to the office without testing.

A day later, city officials in Beijing said that COVID-positive patients in home isolation could return to work without needing to test so long as they did not have a fever. Previously, a negative test was required to leave home isolation.

Directives from Chinese government officials that allow people to go work sick represent a major change in tone from just weeks ago, when Beijing was still wedded to a tough policy of lockdowns and mass testing to completely suppress COVID outbreaks. Now, as China rapidly eases its COVID controls, officials are trying to reassure ordinary Chinese worried about a rapid surge in cases.

Factories are also trying to prepare their workforces for a COVID wave. On Dec. 12, Qin Lihong, president of electric-car maker Nio, told reporters that the company had “sent trucks of medicines and equipment to the factory to be well prepared.”

Some manufacturers are using “closed-loop” systems, where workers live on-site with strict movement controls, in order to keep infections out. Companies like Tesla used these systems to keep factory lines running during earlier COVID outbreaks and lockdowns.

Other factories are trying to lengthen shifts in order to keep production levels high as staff call in sick. Volkswagen reportedly asked workers in one of its factories in southern China to work 11-hour shifts for at least three days. Bloomberg reports that Volkswagen extended shifts after too many workers called in sick.

By trying to keep factories open, companies may also be trying to make up for lost time. Manufacturing activity in China has contracted for four straight months, according to the Caixin Manufacturing Purchasing Managers’ Index, as China’s use of lockdowns and mass testing prevented factories from operating at full capacity.

China’s COVID disruptions are pushing foreign companies to consider manufacturing in other countries. Apple and its supplier Foxconn, for example, are reportedly considering sourcing some Apple products, like AirPods, iPads and MacBooks, from factories in India and Vietnam.

Having COVID-positive workers continue to go to work could also risk spreading the virus further. Some of Foxconn’s assembly line workers are continuing to go to work despite having respiratory symptoms, reports Rest of World. (Foxconn eased many of its COVID controls last week, including reopening cafeterias for its tens of thousands of workers.)

The speed at which China has changed its tune on COVID is catching even government officials by surprise. “The relaxation was so sudden that local governments, health systems, and companies in the supply chain were not prepared,” one official in the city of Nanjing told the Financial Times, also saying it was “every man for themselves.”

For much of the pandemic, the Chinese government used lockdowns, mass testing, and government isolation, even after only a handful of cases, to stop COVID outbreaks from spreading. Yet continuous lockdowns damaged China’s economy, dragging down factory and service activity, as well as consumption.

In early December, Beijing announced a major easing of its aggressive COVID controls, likely accelerated by rare nationwide protests. Chinese officials announced that they would no longer require a negative test result to enter many public venues or take public transport. Health officials would also allow patients with mild COVID symptoms to isolate at home rather than in a government facility, and would only impose lockdowns on individual floors and buildings, rather than entire neighborhoods or districts.

But now Beijing’s easing of COVID-zero is happening in conjunction with what is likely China’s worst-ever COVID outbreak.

Official Chinese data suggest that COVID cases have fallen far from their peak in early December, with a rolling seven-day average of 2,650 cases compared with 40,800 at the beginning of the month. The country’s official channels are reporting only a handful of COVID deaths.

Yet the official numbers are likely undercounting the true extent of the outbreak. China recently announced it would stop including asymptomatic cases in its official numbers. On Tuesday, the government also narrowed the definition of a death from COVID, and will only count deaths specifically from pneumonia or respiratory failure, excluding COVID-positive patients who die from other causes, like a heart attack.

China might currently be seeing as many as 1 million COVID infections and 5,000 COVID deaths a day, according to analytics firm Airfinity. And it might get even worse from there: Airfinity says daily case counts could peak at 4.2 million by March.

Chinese drugstores are experiencing shortages of flu, fever, and anti-COVID medication as ordinary Chinese look for relief in the event they catch COVID. Even neighboring markets, like Hong Kong, Taiwan, and Singapore, are reporting shortages as Chinese buy medicine to ship back to mainland China.