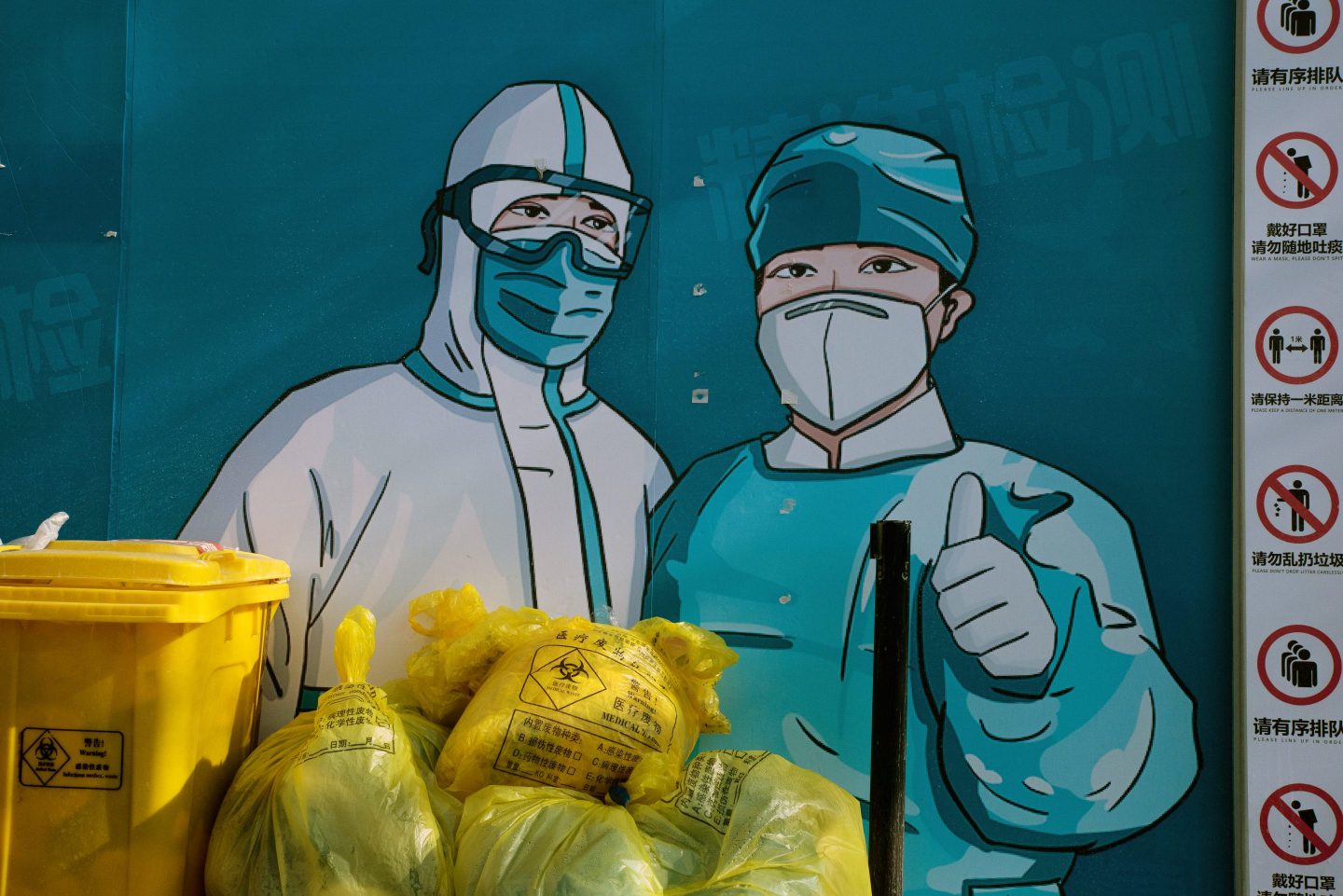 Investors are bullish on signs that China will reopen soon—but an exit wave of cases might lead to economic volatility in the first half of the year.
Bloomberg/Getty Images

China announced its biggest shift away from its tough COVID-zero approach on Wednesday, allowing some COVID patients to isolate at home and ending testing requirements.

The changes back up recent messages from Chinese officials that the country is entering a “new stage” of its COVID response and affirms bullish calls from analysts who expected the Chinese mainland to reopen after years of COVID-era isolation sooner than previously expected.

On Monday, Morgan Stanley analysts said that Chinese stocks were undervalued now that the reopening of the Chinese economy seems imminent. Investors had already gotten the memo; they’ve been piling into Chinese equity markets based on hints from Beijing that it was preparing to relax some of the country’s strict COVID rules. Hong Kong’s Hang Seng Index is up 30% since the beginning of November. (The Hang Seng Index is still down 37% from its February 2021 peak). Both Shanghai’s SSE Composite Index and Shenzhen’s SZSE Component Index are up 10% since the beginning of last month.

“It is a great opportunity to buy the dips in the next few months,” Winnie Wu, Bank of America’s chief China equity researcher, told the South China Morning Post.

Yet mainland China’s reopening and the inevitable COVID outbreak to follow will likely cause further economic disruption in the first half of next year. Despite their newfound optimism, analysts are warning of a “bumpy” economic recovery ahead.

For nearly three years, China has used tough measures to suppress the spread of COVID-19. Officials have imposed multiple rounds of mass testing and district-wide snap lockdowns to contain even a handful of cases. But rare, nationwide protests against lockdowns and constant testing in late November likely accelerated Beijing’s concession that the country needs to move on.

On Wednesday, China introduced new rules that represent the biggest easing of its hard-line COVID response to date. China’s State Council announced that those with mild COVID symptoms will be allowed to recover at home instead of in quarantine camps, and people no longer need a negative COVID test to travel or enter most public venues. And while lockdowns may still be imposed, officials will limit them to individual floors or buildings, rather than entire neighborhoods or districts.

Some of these measures were already being carried out by local officials in cities like Shanghai, Beijing, and Guangzhou where protests occurred. And last week, Vice-Premier Sun Chunlan, China’s top official responsible for the country’s COVID response, said mainland China was in a “new stage” of the pandemic. Chinese state media had also been laying the groundwork for a shift away from COVID-zero, with Xinhua, the country’s state-controlled news agency, saying, “The most difficult phase of the pandemic has passed” in a Tuesday article.

When will China reopen?

Lockdowns and other COVID restrictions have weighed on China’s economy. China’s GDP grew by just 3.9% year on year in the third quarter, below Beijing’s target of 5.5%. The country’s most recent wave of COVID outbreaks and lockdowns are putting it in a deeper hole. Service activity shrank in November to reach a six-month low, according to the latest Caixin services purchasing managers index. Factory activity also shrank in November, extending declines in October.

COVID-zero is also depressing China’s export market. A hastily imposed COVID lockdown in one of Foxconn’s major iPhone factories led to protests and disrupted production. Foxconn on Tuesday said the chaos contributed to a 29% decline in revenue in November compared with the month prior. It’s the first time the manufacturer has ever recorded a drop in monthly revenue in the important preholiday season.

Beijing may be as concerned about the disruption to foreign manufacturers as it is about the protests, says Alicia Garcia-Herrero, chief Asia-Pacific economist for investment bank Natixis. “China cannot afford to lose the jobs offered by foreign companies,” she says.

Prior to Wednesday’s announcements, most investment banks pegged mainland China’s exit from COVID-zero to the middle of next year. Even as it deemed Chinese stocks undervalued, Morgan Stanley stuck by an early prediction that the country will reopen by spring 2023, moving to a system where “broad mandatory containment measures and large-scale COVID testing will no longer be adopted,” and where many social distancing measures would be rolled back.

But even before Wednesday, the country’s subtle retreat from COVID-zero had prompted some banks to move up their forecasts of a full reopening—or express more confidence in their bullish calls from earlier in the year. Goldman Sachs forecasts a mid-2023 reopening, but put chances of an earlier reopening at 45% on Sunday, up from 30% in November.

Garcia-Herrero says China might open as early as the end of this year. “We’re assuming the whole of 2023 will be open,” she says.

There’s a big caveat to mainland China’s reopening: an easing of restrictions will inevitably trigger a large surge in COVID cases unlike anything the country has seen before.

Such an outbreak could have deadly consequences, given relatively low rates of vaccination among the elderly and Beijing’s distribution of Chinese-made vaccines that are less effective than mRNA jabs. According to official data, only 40% of people over 80 have received a booster dose. Studies show that three doses of China’s COVID vaccines are needed to provide the same level of protection against severe illness and death from the Omicron COVID variant as two doses of Pfizer’s or Moderna’s mRNA vaccines.

China recently pledged to improve vaccination rates among the elderly, which many analysts interpreted as a sign that the country is preparing for a reopening.

Garcia-Herrero says that China could administer third-dose boosters to 70% of those over 80 by the end of the year “if they really speed up,” in which case the country might open up “right away.” But even in that scenario, she warns, “many people would probably die.”

China could report as many as 20,000 daily deaths from COVID-19 in the spring if it continues to reopen at its current pace, according to models from Wigram Capital Advisors, a macroeconomic advisory group.

A surge in COVID cases, deadly or not, will hamper China’s economy, even as Beijing loosens COVID controls. Ordinary Chinese people, worried about catching the coronavirus, will likely isolate and reduce consumer spending until the outbreak subsides. And those who do catch COVID will stay home from work as they recover, lowering output and disrupting operations. “Lots of people will get sick, which could result in factory closures or facilities being unable to run at full capacity,” Zhang Zhiwei, chief economist for Pinpoint Asset Management, told the South China Morning Post.

Even Morgan Stanley’s more optimistic research note on Monday warned of a “bumpy” recovery. There will be “lingering containment measures, and possibly some zigzagging, during the initial phase of reopening,” wrote Robin Xing, the bank’s chief China economist.

“The combination of rising cases, some regions loosening policies, the winter flu season, and the upcoming Lunar New Year when hundreds of millions of people typically travel makes it difficult to predict how cases, COVID restrictions, and mobility may evolve in the coming months,” Hui Shan, chief China economist for Goldman Sachs, wrote in a note on Sunday.

And a surge of cases might lead to public discontent against a COVID-zero exit from those worried about the surge in cases caused by reopening, warns Garcia-Herrero.

Public blowback may trigger greater volatility and lower growth for the first half of the year. Goldman Sachs predicted in November that China’s economy might grow just 2% in Q2 2023, before rebounding to 10% GDP growth the following quarter as people get used to living with COVID.

Hong Kong’s experience earlier this year is an example of how an uncontrolled outbreak in a COVID-zero territory can wreak havoc on an economy. After two years of isolation and low case counts, the semiautonomous Chinese city suffered a massive outbreak between February and April of this year. Low vaccination rates among the city’s elderly population led to 9,100 deaths in the first four months of the year, making the outbreak the most deadly in the developed world.

Hong Kong’s outbreak also crashed the city’s economy. GDP sank by 4% in the first quarter, compared with the same period a year earlier. Consumer spending and investment also fell by 5.5% and 8.4% year on year, respectively.

An outbreak in mainland China that mimics Hong Kong’s would be massive given the mainland’s size. Goldman Sachs predicts “millions of daily new cases for a few months, which would be orders of magnitude more than the highest number the country has witnessed thus far.”