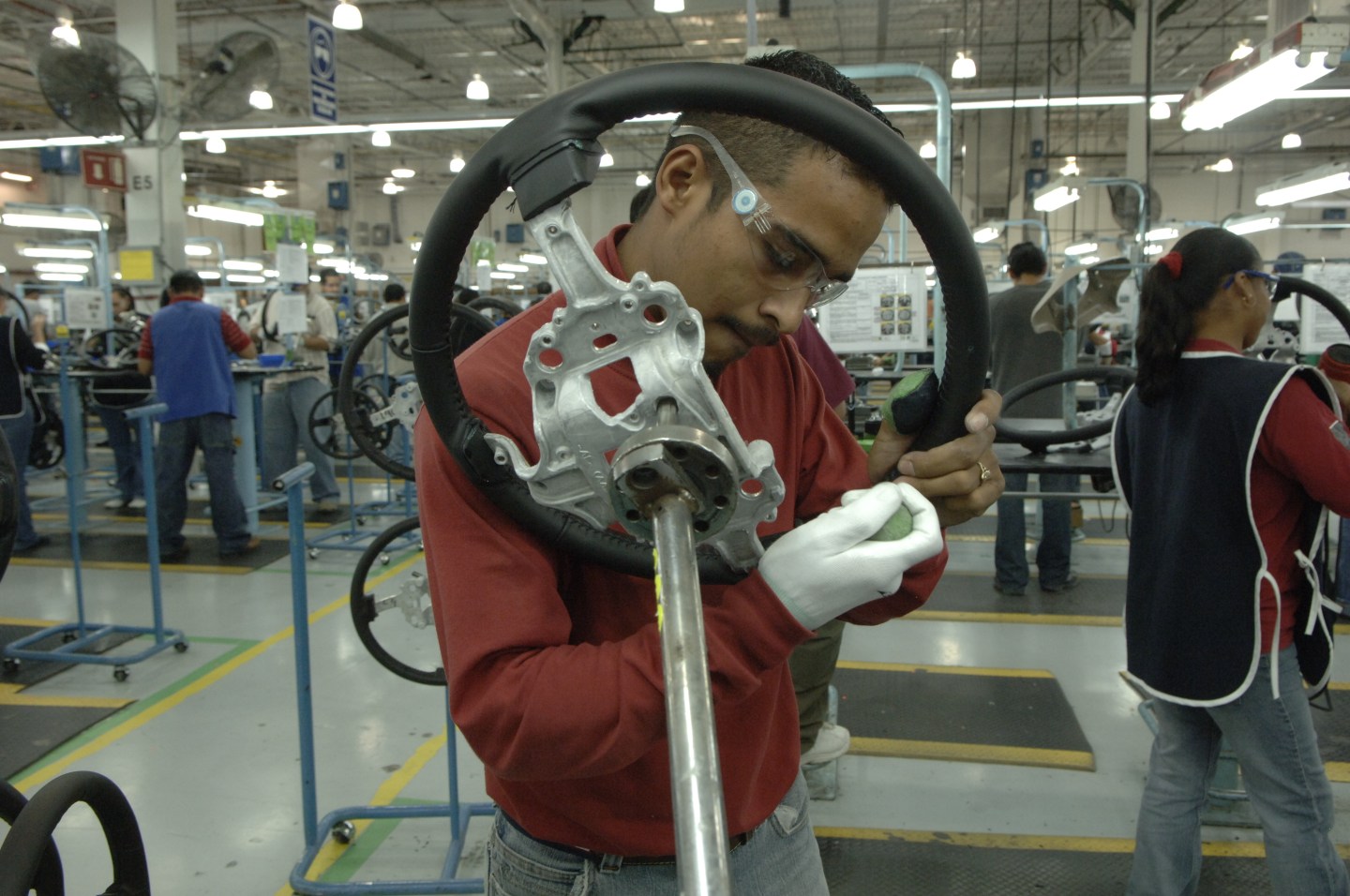 If this year was when companies realized just how difficult it is to rely on China for their business success, 2023 may be the year Latin America steps in to fill that void

Javid Group is an Arizona-based company that helps foreign companies overcome the legal, fiscal, and regulatory hurdles of starting operations there. Before 2022, Javid worked with two or three clients a year. But in 2022, it has worked with six clients setting up shop in the country, and already has four lined up for the first quarter of 2023.

“What we’re seeing coming into Mexico, it’s unheard of,” Joshua Rubin, vice president of business development at Javid, told Fortune. “From my line of business and the people I’ve been talking to, this is not going to be ending anytime soon.”

Nearshoring, or expanding business in countries with a close proximity to a company’s customer base, has taken off over the past year, as COVID lockdowns, supply chain snarls, and geopolitical uncertainty disrupted operations for the world’s traditional manufacturing hubs. China, long-considered the factory of the world, is no longer as reliable after its zero-COVID policy disrupted operations at factories making Tesla and Apple products, among many others.

The difficulties of maintaining global supply chains has pushed more and more companies to cast their nets closer to home this year, and experts say that China’s loss could be a massive gain for the Americas. In 2022, 400 North American companies were exploring moving their operations from Asia to Mexico, economy minister Raquel Buenrostro said in November. And in early 2023, the U.S. and Mexican governments will present joint plans to encourage more companies to move their businesses from Asia to Mexico, highlighting benefits and incentives.

The big lesson for manufacturers in 2022 was: “I don’t want to put all my eggs in one basket. I don’t want to trust everything in Asia,” said Rubin. In 2023, it will be all about putting their new plans in motion.

Experts tell Fortune that the process could not only accelerate growth and development in Latin America, but help further advance U.S. political interests by keeping China’s influence in the region at bay.

“Nearshoring is going to be a continued subject of conversation,” Ryan Berg, director of the Americas Program at the Center for Strategic and International Studies told Fortune. “The urgency of getting nearshoring to Central America is very, very high. It’s now. It’s immediate. It’s not in five years or 10 years from now,”

The Americas are “open for business”

With hundreds of companies looking at setting up shop in Latin America and billions already invested, countries are gearing up for a potential windfall over the next decade.

A clear winner from the nearshoring wave is undoubtedly Mexico, due to its proximity to the U.S. and relatively cheap labor, but it isn’t only U.S. companies interested in moving there. European companies including automakers Volkswagen and Continental, as well as tire maker Pirelli, have already announced plans to invest and establish manufacturing plants in Mexico in 2023, while Javid’s Rubin says one of his biggest clients is from Switzerland, as manufacturers look to be closer to their U.S. customer base.

In 2022, Mexico’s manufacturing sector grew 5%, exceeding its pre-pandemic size, and the current conditions represent the “best growth opportunity for the next 10 years,” Bank of America economists wrote in an October research note.

He added that bilateral plans from the U.S. and Mexican governments are set to facilitate the nearshoring push in 2023, including agreements to modernize ports of entry as well as telecommunications and infrastructure, including roads, railways, and airports. Over the summer, Mexico President Andres Manuel Lopez Obrador said U.S. companies were planning on investing $40 billion in the country between now and 2024, which he said will improve the country’s reputation among investors globally and place Mexico at the forefront of global supply chains.

But with lower labor costs and relative proximity to the U.S., other Latin American countries aren’t far behind.

The Inter-American Development Bank (IADB), the largest developmental finance institution servicing Latin America and the Caribbean, announced in June that nearshoring efforts could add $78 billion in export value across Latin America by 2025 for everything from pharmaceuticals to renewable energy components.

“Mexico is the obvious place because of the geographic proximity, and the fact that the trade agreement that Mexico has with the United States is the most up to date,” Berg said. But he added that “there are a lot of opportunities that aren’t being exploited in Central America.”

Export values in the seven Central American countries excluding Mexico—Belize, Guatemala, Honduras, El Salvador, Nicaragua, Costa Rica, and Panama—are forecasted to rise by more than $3 billion by 2025, according to the IADB. In South America meanwhile, export values in Argentina will rise by almost $4 billion, and nearly $8 billion in Brazil.

But nearshoring’s story in 2023 isn’t just about Latin America’s gain, it’s also about China’s loss, as many companies are already starting to wind down their interests in the country.

China’s COVID situation is part of the reason business confidence in the country recently fell to its lowest point in nearly a decade, and close to twice as many U.S. companies have decided to cut their investments in China in 2022—more than 60 companies—compared to last year, according to an October survey from the Shanghai branch of the U.S. Chamber of Commerce, an organization that assists U.S. companies operating in China.

China began lifting its zero-COVID policy earlier this month, although health experts have warned the reversal could lead to widespread and uncontrolled COVID outbreaks, which have already taken a toll on business operations in the country.

“So many companies experienced shortages and difficulties in getting parts from China. Shipping delays, increasing costs, all these things which exposed that risk in their long global supply chains,” Rosemary Coates, executive director of the Reshoring Institute, a non-profit and non-partisan consultancy for companies seeking to expand their operations in the U.S., told Fortune.

China’s zero-COVID policy that locked down several factories this year has already prompted prominent companies including Apple to consider moving at least part of their production out of the country, reportedly seeking to expand manufacturing operations in Vietnam and India next year. Nearly a quarter of European companies operating in China were also considering leaving the country earlier this year, according to a EU Chamber of Commerce survey, the highest proportion in a decade.

Other companies have cut back on operations in China, including Tesla, whose Shanghai gigafactory announced earlier this month it would suspend production of its Model Y vehicle through the end of the year, as part of a larger 30% cut in planned production for the model amid falling demand in China. Tesla is reportedly also finalizing plans for a new electric vehicle manufacturing plant in northeastern Mexico to be announced before the end of the year, according to Bloomberg.

Companies nearshoring to the Americas could also come back to hurt China politically, as more U.S. investment in Latin America could stand in the way of China’s massive investment plans in the region as part of its sweeping Belt & Road Initiative, Berg from CSIS said.

He argued in a report earlier this month that nearshoring in Central America was the best and most effective way for the U.S. to counter China’s growing influence in Latin America. Over the past decade, China has scored big political wins in the region by swaying Nicaragua, Panama, El Salvador, and the Dominican Republic to switch allegiances from Taiwan to China through investments in new infrastructure projects or shipments of COVID-19 vaccines.

“The more we leave [Latin American countries] out to dry, the more they might be tempted by China’s overtures that they’ll make all these big crazy investments in infrastructure, because that’s really their main mechanism for wooing countries away from Taiwan: the volume of of investments that they can make,” Berg said.

The ace up China’s sleeve

While nearshoring is expected to shift focus away from Asia towards the Americas, four experts Fortune spoke with agreed that companies might be diversifying their manufacturing, but few are thinking about abandoning their operations in China altogether.

“We are seeing a nearshoring of manufacturing returning back to the States, but not at 100% capabilities,” Javid’s Rubin said. “The world cannot manufacture without Asia, China, Vietnam, Malaysia, Korea.”

Part of Asia’s staying power as a manufacturing hub is an easier access to raw materials than many countries in Latin America. Chinese companies dominate global extraction and production markets for critical raw materials, especially for rare earth minerals used to manufacture solar cells and batteries for electric cars. Even though China only accounts for around one third of global rare earth mining, the country controls 60% of global production and 85% of processing capacity.

“It’s absolutely a challenge,” the Reshoring Institute’s Coates said in reference to competition with Asia over raw materials. “This is one of the highest exposures in terms of risks that we’ve recognized over the last couple of years.”

China’s control of raw material markets means some operations cannot be cheaply nearshored, Rubin said, arguing that the resilience of a business increasingly depends on how diverse their operations are.

“I would call it a diversification of manufacturing. That’s what we’re seeing,” he said. “Most companies are saying, ‘I’m not closing down my operation. I’m just expanding manufacturing.’”