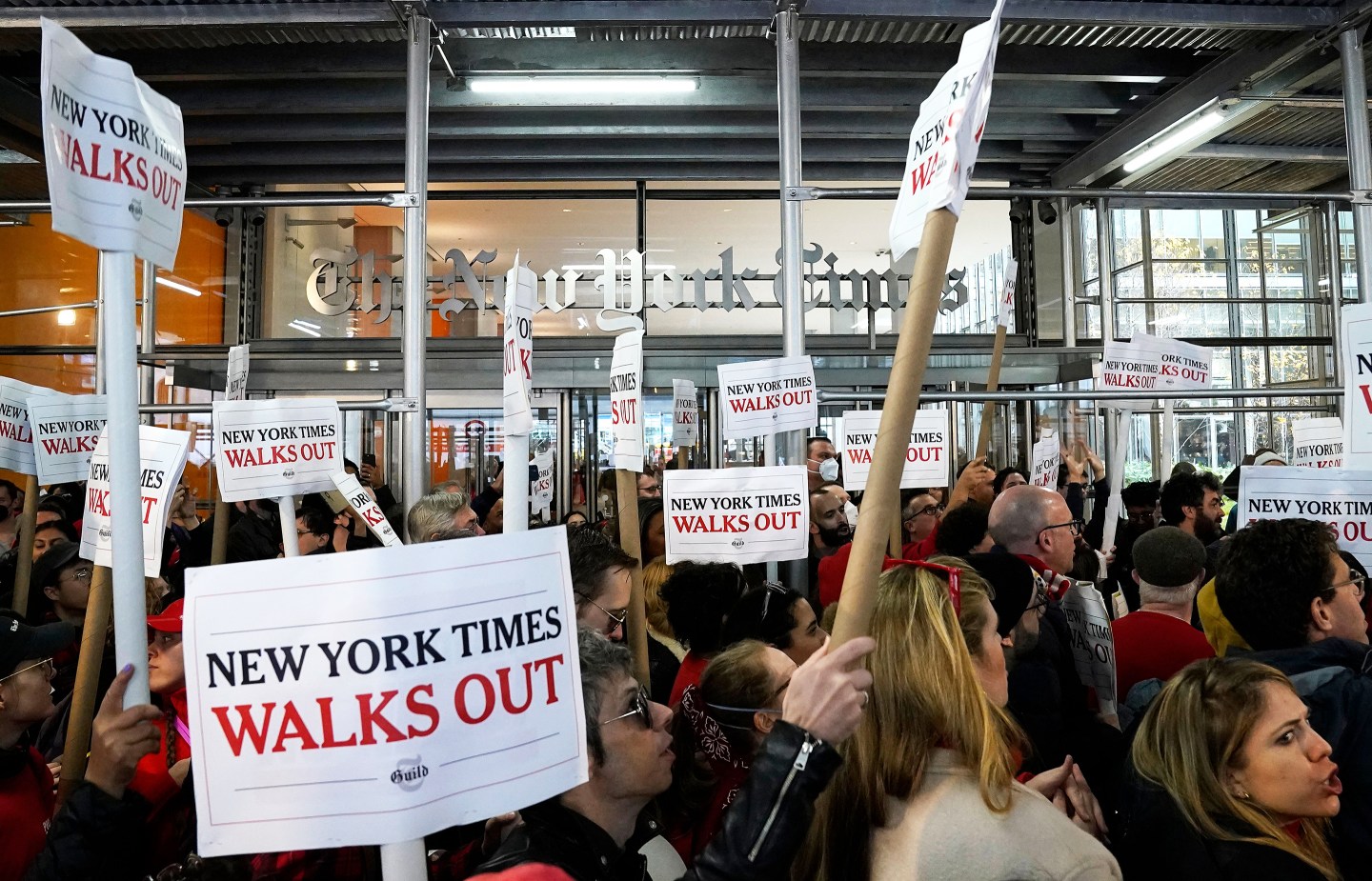 Newsroom staff and employees of The New York Times walk out of the office for a 24-hour strike, in New York City on December 8, 2022.
Timothy A. Clary—AFP/Getty Images

It’s no secret that today’s workers maintain a tenuous relationship with their bosses. Since the pandemic began nearly three years ago, millions of workers have joined unions and made demands, walking off the job for better conditions.

But the strong labor market that gave workers the firm upper hand over their bosses seems to slowly be receding. Last month, amid widespread layoffs (mainly in the tech space), unemployment grew to 3.7% from 3.4% six months earlier. But even though it’s not what it was earlier this year, it’s still holding tight: In October, there were 10.3 million open jobs, nearly double the average of each October between 2000 and 2020 (4.6 million).

It means that workers aren’t planning on giving up their power in the new year, Thomas Kochan, an employment research professor at the MIT Sloan School of Management told TIME.

He expects to see “more conflict, more strikes, and more contract rejections,” among workers in 2023. During strong years, workers remain focused on profits, while at the same time, companies think about preemptively cutting down on costs in preparation for a slowdown. That difference in expectations, Kochan said, “creates a higher probability of conflicts and strikes.”

One need not look far to find examples of this in both white- and blue-collar industries. Earlier this month, over 1,100 New York Times journalists walked out of the company’s Manhattan headquarters in protest of long, drawn-out union contract negotiations. The work stoppage—the first of its kind at the paper in 40 years—lasted for 24 hours, as the workers insisted on good-faith bargaining over such policies as remote work and wage increases.

And on one of its busiest days of the year—Black Friday—Amazon workers around the globe striked as part of a coordinated movement called “Make Amazon Pay.” Over 80 trade unions, environmental activist groups, and tax watchdogs took part in an effort to demand Amazon pay its workers a fair wage, “respect their right to join unions, pay its fair share of taxes, and commit to real environmental sustainability.”

Worker conditions have even caught the eyes of the government. President Joe Biden signed a bill in early December to avert a freight rail strike that, had it occurred, could well have thrown the U.S. into a deep recession. The unionized rail workers were demanding paid sick leave and less brutal scheduled hours, among other benefits.

“The bill I’m about to sign ends a difficult rail dispute and helps our nation avoid what without a doubt would have been an economic catastrophe at a very bad time in the calendar,” Biden said at the time.

All told, 374 worker strikes started in 2022—a 39% year-over-year increase, per Cornell’s School of Industrial and Labor Relations’ Tracker. It revealed that about 78,000 workers walked off the job in the first half of 2022, up from 26,500 in the first half of 2021. Most of those strikes revolved around health, safety, and understaffing concerns, one of the Tracker’s project directors, Johnnie Kallas, recently told Axios.

That number is likely to rise again next year. Over 70% of Americans currently approve of unions, an August 2022 Gallup survey found—the last time it was that high was in 1965, when twice as many Americans were union members.

Plus, drastic actions like work stoppages or walk-outs can feel less daunting when workers are confident a new job would await them should they quit or get fired. For every unemployed American seeking a job, there are nearly two openings. Some workers who have found themselves without work never filed for unemployment at all because they were able to nab a new job so quickly.

As the year comes to a close, the culmination of these findings suggest that the worker-boss war may just be beginning.