Biden’s efforts to starve China of chips are rewriting the rules of global trade–and even U.S. allies are balking at the upheaval 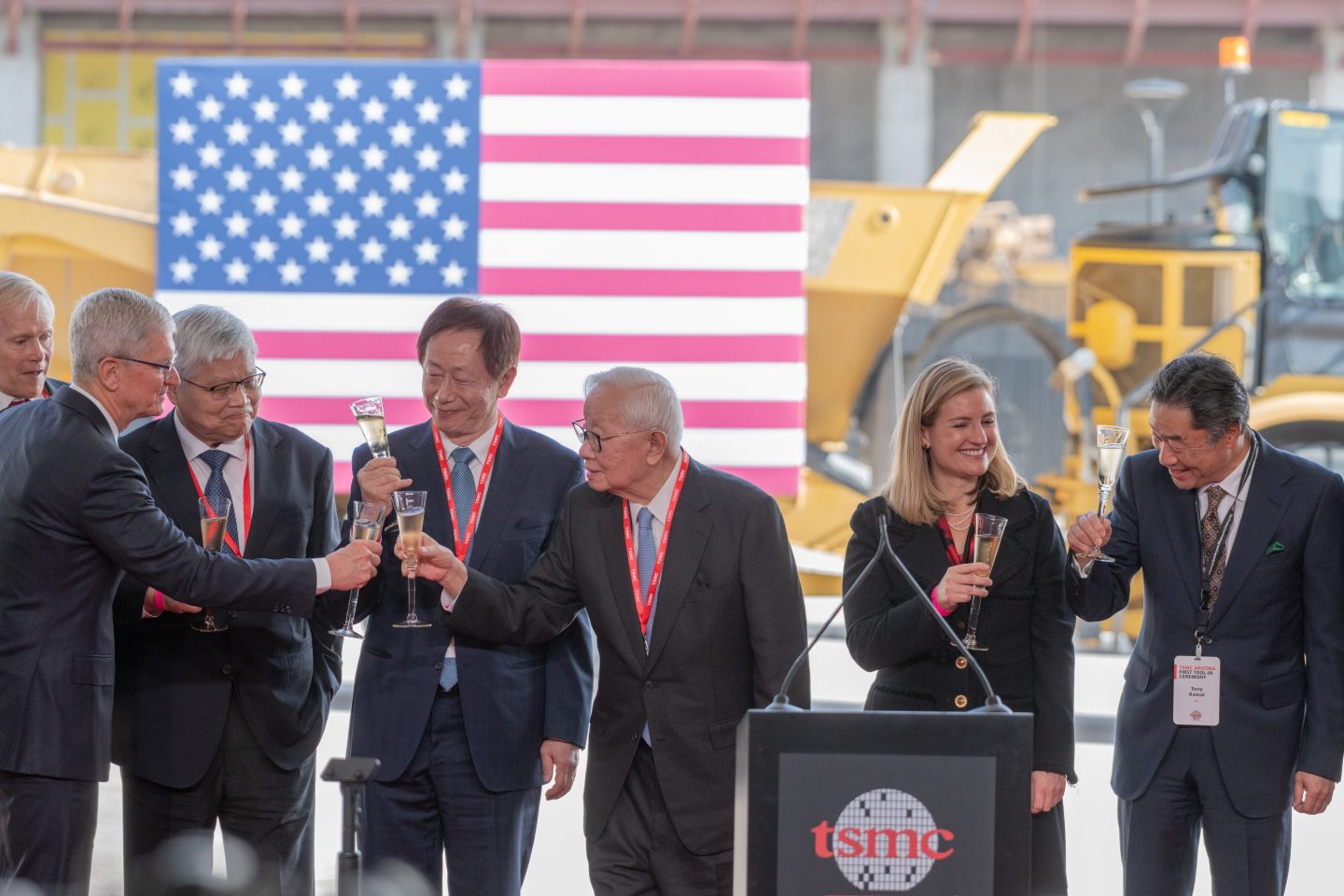 It was supposed to be a celebratory occasion. U.S. President Joe Biden, Apple CEO Tim Cook, and Morris Chang, the 91-year-old founder of Taiwan Semiconductor Manufacturing Company, had gathered in Phoenix, Ariz., in early December to mark the first delivery of advanced chip making equipment to the Taiwanese company’s first Arizona factory. At the event, TSMC announced it would build a second factory in Arizona, bringing its investment in the state to $40 billion, the most ever by a foreign company. When the second factory comes online in 2026, it will pump out TSMC’s most advanced chips, a 3-nanometer semiconductor that will power Apple and AMD devices.

But at the event, Chang issued a warning that punctured the otherwise jovial atmosphere: “Globalization is almost dead and free trade is almost dead,” he said. “A lot of people still wish they would come back, but I don’t think they will be back.”

The statement alluded to protectionist policies that the U.S. unleashed this year to support and safeguard the nation’s vital semiconductor sector whose chips are the backbone of smart devices, from cellphones to home appliances to cars.

The policies are likely to boost the American chip industry after years of neglect, but the new subsidies and export controls—which target China, in particular—are disrupting the global semiconductor supply chain and forcing U.S. allies to choose sides. Countries friendly with the U.S. argue Washington is more interested in kneecapping a strategic rival than in building more resilient supply chains. Some economists, like Paul Krugman, say Biden’s moves are weakening the global trading system.

The CHIPS and Science Act, passed in August, was the first indication of renewed U.S. attention to the semiconductor industry after the chip shortages of 2020 and 2021.
Chip Somodevilla—Getty Images

The kinks may get worked out in time. Both the Netherlands and Japan have agreed “in principle” to support the U.S.’s new chip curbs on China, reports Bloomberg. And Taiwan, a chips powerhouse, and its leading ships manufacturer TSMC have made their choice: The company is building factories for its most-advanced chips in Arizona, Taiwan, and Japan—not China. Still, U.S. allies need to balance their interest in maintaining some trade with China against staying in Washington’s good graces. They face an ultimatum of sorts from the U.S.: “Either you’re with us, or you’re going to face economic consequences,” says Nicolas Lamp, an assistant professor at Queen’s University and a former dispute-settlement lawyer with the World Trade Organization. “It’s really an escalation.”

After the chip shortages of 2020 and 2021, officials in the U.S. and elsewhere feared that the semiconductor supply chain was liable to be disrupted again. Officials in Washington were particularly concerned about China’s chip advances and the U.S. losing its edge in artificial intelligence and supercomputing to China. The U.S. needs to “maintain as large of a lead as possible” against rivals, U.S. National Security Advisor Jake Sullivan said in September.

U.S. business leaders also worried that a conflict between mainland China and Taiwan would cut off the supply of advanced chips produced by Taiwanese companies like TSMC. “There’s been a general mood shift among the U.S. corporate executive class to take Taiwan war risk more seriously,” says Chris Miller, associate professor at Tufts University and author of Chip War: The Fight for the World’s Most Critical Technology.

The Biden administration sought to allay some of those fears by passing two policies to boost the U.S. semiconductor industry in 2022.

The first was the CHIPS and Science Act, passed in August, which provided $50 billion in subsidies for U.S.-based chip manufacturing. Intel, Micron, GlobalFoundries, and TSMC all announced U.S.-based factory projects that would tap into the new pool of money. The legislation bars any recipient of the funds from expanding production of advanced chips in China, forcing some chip manufacturers to consider pulling out of the country.

The second policy, enacted in October, also targeted China’s chip industry. It bans exports of advanced chip making equipment and advanced chips used in supercomputers to Chinese companies. Foreign companies are subject to the new rules if they use U.S.-made equipment. Even Chinese-American workers in China’s semiconductor industry have been caught in the fray, since the rules prohibit “U.S. persons” from supporting China’s chip development.

On Dec. 12, China filed a dispute against the U.S.’s new chip rules with the World Trade Organization, arguing the measures constituted protectionism and threatened the stability of the global supply chain. In response, the U.S. argued that its chip rules concern national security and declined to discuss them at the WTO.

The U.S. policies were introduced with American industry in mind, yet U.S. officials have admitted that they need the buy-in of allies for the measures to work.

“We recognize that the unilateral controls we’re putting into place will lose effectiveness over time if other countries don’t join us,” one official told reporters in October.

U.S. allies–even those wary of Beijing–are hesitant to decouple their chip supply chains from China to the extent Washington is demanding. They want to preserve their manufacturing presence in China or keep their access to the Chinese market. Few countries have fully endorsed Washington’s view of China as a strategic rival.

“Everyone recognizes that there’s a substantial market opportunity in China, and so these restrictions are met with some dismay,” says Michael Burns, managing partner of Murray Hill Group, which invests in semiconductors and manufacturing. “But there’s also a recognition that there’s a huge market for their products in the U.S., and there are required technologies that all countries tend to need from the U.S. And so there’s a need to work within U.S. policy, and try to help shape it.”

South Korea, for example, is worried that new U.S. rules will require its chip companies to abandon their factories in China, forcing them to establish manufacturing in other countries. Korean chip companies like Samsung and SK Hynix have reportedly considered scaling back their Chinese manufacturing to comply with U.S. rules.

The Netherlands’ view on the U.S. chip controls is focused on one company: ASML Holdings, which is the only manufacturer of the advanced lithography equipment that etches chip designs onto silicon. China makes up 15% of ASML’s sales, according to its last annual report.

Peter Wennink, CEO of ASML Holding—the only manufacturer of the lithography equipment needed to make the most advanced chips—has insinuated that his company is facing unfair pressure to stop selling to China.
SeongJoon Cho—Bloomberg/Getty Images

ASML’s leadership has complained about U.S. pressure on the company to stop selling in China. “ASML has already sacrificed,” CEO Peter Wennink told a Dutch newspaper on Tuesday. Wennink also insinuated that Washington was unfairly targeting his company, noting that U.S. producers of less-advanced chip making equipment are still allowed to sell to China.

Finally, some politicians in Taiwan are worried that supply chain diversification might diminish the island’s stature in the global chip industry.

Taiwan faces a “tricky balancing act,” says Miller. “On the one hand, the Taiwanese government and TSMC can’t be seen to be promoting diversification away from Taiwan. But they also need to be responsive to their customers, and the urging of the U.S. government, because they are critical stakeholders in Taiwan’s success.”

Will they get worked out?

The U.S. won over some allies on its chips action. Bloomberg reported last week that both Japan and the Netherlands have agreed to bar the sale of advanced chipmaking equipment to China in line with the measures Washington imposed in October. (U.S. and Japanese officials confirmed to Reuters that they held discussions about export controls, but did not go into details)

On Dec. 5, the U.S. and the European Union agreed to coordinate their chip subsidy programs, sharing information and best practices between the two governments. They also set up an early warning system to recognize potential supply disruptions for chips and agreed to “cooperate” on export controls of sensitive technologies, but that segment of the statement only refers to Russia—not China—by name.

The initial unilateral nature of the U.S.’s chips policies were the latest signs that the Biden administration is willing to ostracize allies for the sake of domestic manufacturing. The Inflation Reduction Act, passed in August, also angered friendly nations for including aggressive subsidies for electric vehicles–but only if they’re produced in the U.S. South Korea and the European Union have complained that their products are now uncompetitive in the U.S. market since Korean- and European-made electric cars don’t qualify for the support.

U.S. allies face “a delicate dance,” says Rakesh Kumar, professor in the electrical and computer engineering department at the University of Illinois. Washington “is asking its allies to act against their concrete short-term economic interests in exchange for somewhat nebulous long-term geopolitical and economic benefits,” he says.