Will the U.S. and Europe slide into recession in 2023? Here’s how to look out when economic outlooks don’t 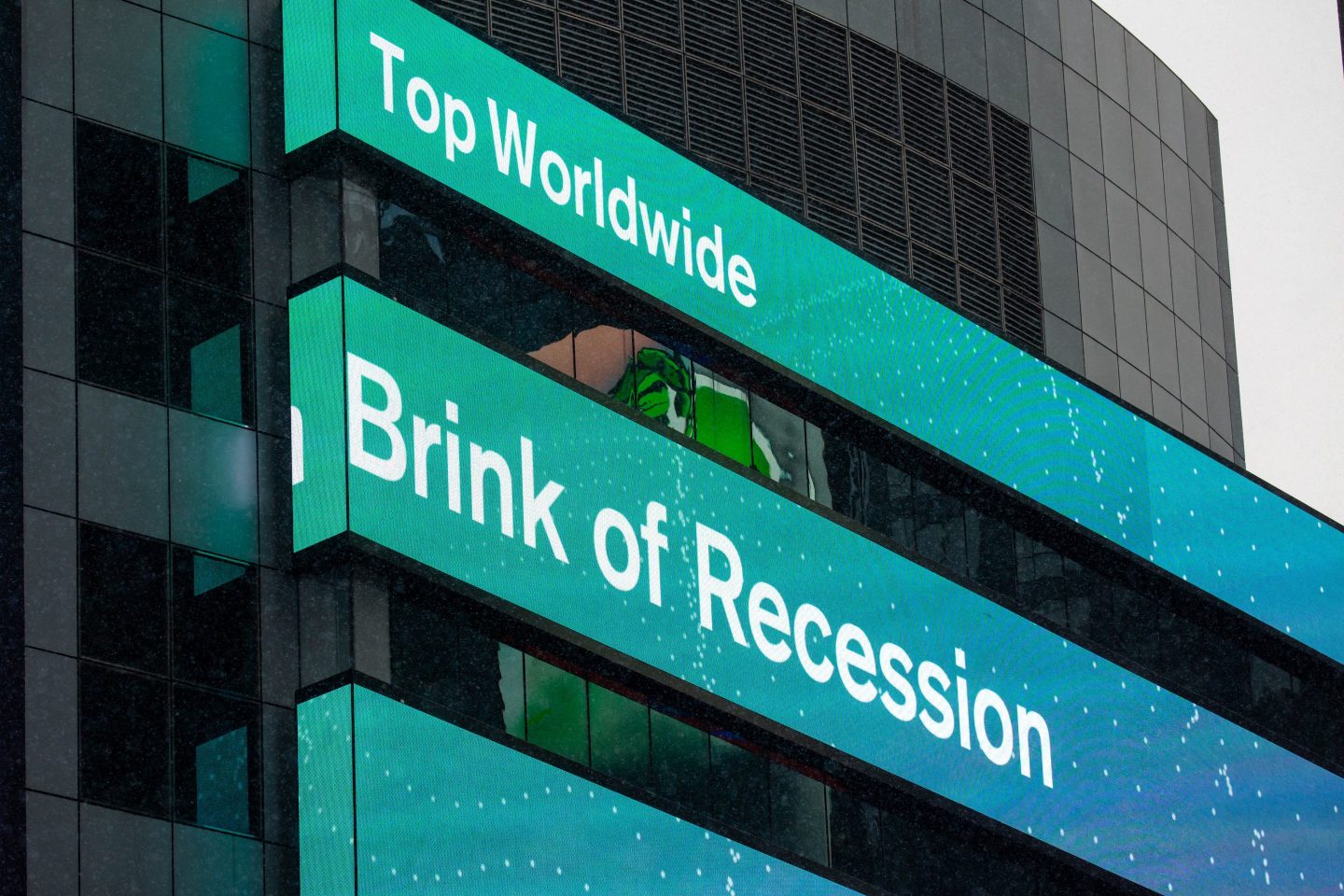 The gloomiest 2022 predictions did not come to pass, but serious risks continue to loom over the global economy in 2023.
Michael Nagle—Bloomberg/Getty Images

2020 outlooks were quickly dismantled by COVID, and 2022 outlooks were shredded by Russia’s war in Ukraine–but it’s not just exogenous shocks that undermine outlooks. As the economy weathered blows this year, prominent voices spoke of economic “hurricanes” or prematurely declared the U.S. in recession. However, as the year closes out, we’re looking at an economy with many strengths, even though macroeconomic headwinds remain exceptionally strong.

If outlooks fail so often, how can we plan for 2023? Rather than asking whether there will be a recession, executives and investors are better off asking what would cause it. Shifting from point forecasts to frameworks organizes risks, considers multiple future scenarios, and grounds us to react more calmly when shocks do hit. No framing is a crystal ball. It cannot lower the very real risk of recession, but it can achieve more nuance than the gloom that has let down many forecasts in 2022.

Shocks naturally remain the biggest challenge to forecasts, but they can also bolster them. Consider those who predicted an inflation surge in early 2021 because of too much monetary and fiscal stimulus. That prediction deserves credit. However, it was subsequently aided by sputtering supply chains and energy prices surging past pre-pandemic levels, not to mention Putin’s subsequent war in Ukraine that pushed energy prices even higher. It’s clear that a sequence of shocks broadened inflation and delayed its peak.

Another scourge of forecasting is the temptation to extrapolate the last macro data release, bridging sentiment into prediction. Consider the confluence earlier this year as geopolitical conflict, rising interest rates, and soft GDP data weighed on sentiment. Jamie Dimon, the CEO of JPMorgan Chase, memorably captured the mood when he said the economy was going to see a “hurricane,” a statement eagerly picked up in premature recession headlines.

Both examples highlight that while a forecast’s value is often perceived in hitting the mark, its greater value is to identify and communicate the drivers at play.

Ditching forecasts for frameworks in 2023

Dwight Eisenhower famously said that “plans are useless, but planning is indispensable.” It is not the forecast that is valuable, but the process that exposes drivers, risks, and multiple outcomes.

Specifically, executives should not ask will the recession happen, but what it would take to land in one, shifting the perspective from outcomes to drivers. A high-level recession framework emphasizes three paths to recession.

First, the real economy (consumers and firms) can lead us into recession when shocks crush their confidence, halt their spending, and undo investment plans. Though a very large shock will undo the strongest of economies (think COVID lockdowns), typically this means weighing the size of a shock against the economy’s prevailing strength. Some shocks will be absorbed, and though real economy recessions can be significant, they are not typically structural turning points, allowing economies to bounce back to their prior trend.

Second, monetary policymakers can lead economies into recession. Policy recessions happen when central banks raise rates too fast, too far, or for too long, tightening financial conditions and choking the economy.

When the alternative is an even bigger inflation problem, a crash landing can be an intended and sensible choice. There is little precision in the policy tools that allow for a graceful slowing of growth and prices. When policymakers raise rates, the bluntness of their instrument means they also raise the risk of a recession.

Third, financial recessions can occur after financial bubbles burst, or a shock hobbles the banking system. They are typically the worst type of recession because they can do lasting damage to balance sheets and credit intermediation, requiring a slow rebuilding. The Global Financial Crisis in 2008 and the European Sovereign Crisis in 2011 were financial recessions, but not all recessions (or recoveries) are that painful.

What does this framework say about 2023? Though global energy prices are a sharp headwind to the U.S. economy, it’s the eurozone where a bigger shock has likely pushed more vulnerable economies into recession. The question is how deep and long a downturn might be.

Much of the intense gloom of 2022 has not come to pass as macro data has generated a string of modest positive surprises. Many European firms have showcased their resilience. By the third quarter, German industrial production was in line with 2021 levels while using ~10% to 20% less natural gas.

Will 2023 bring more such upside surprises or has the demise merely been pushed out on the timeline? Many commentators have settled on the latter, suggesting that the escape this winter has simply delayed darker outcomes until next year.

A very deep real economy recession cannot be ruled out, especially if the energy shock intensifies or a new shock hits. Absent those, the real economy may continue to surprise. Firms still have significant needs to invest and they have the capacity to do so. Meanwhile, the European labor market remains tighter than it has been in many years.

For those looking for downside European narratives, a growing risk lies in the second recession type, the policy-driven recession. European inflation has been largely about energy prices so far, something the ECB has no influence over, resulting in a less aggressive increase in interest rates. Were inflation to broaden, like the much broader U.S. problem, monetary policy could become a second recession driver in the Eurozone.

The U.S. continues to face a rather different set of risks in 2023. Rather than a sputtering real economy, U.S. firms continue to hire and households continue to spend. The recession calls got it wrong this year. However, every sign of strength is a problem for the U.S. economy because it fans the flames of inflation and nudges the Fed toward an even more aggressive policy path.

Though headline inflation appears to have peaked with a material decline from its high in June, price growth remains far too high and the journey toward an acceptable pace is far from certain. Even as pockets of price pressure ease, without a slowdown in the labor market—and with it wages—price growth will remain too fast.

That said, the U.S. inflation problem isn’t one that calls for a deliberate crash landing as long-term inflation expectations remain contained. However, slowing down the labor market with the blunt tool of the policy interest rate—with its long and variable lags—is a difficult maneuver. The early signs of the journey have had some encouraging signposts, but there’s still a long way to go. Monetary policy may remain a headwind to growth for years.

The risk of a financial crisis

As interest rates have risen rapidly, the possibility of something breaking in the financial system increases, making it imperative to consider also the third recession type.

Financial markets—ranging from traditional asset classes, to alternatives, to exotics—have delivered a nauseating performance in 2022 as shocks disrupted markets and policymakers slammed the breaks. It is some comfort that the tightening of financial conditions has been driven primarily by falling valuations and volatility, which are less systemically threatening than tightening driven by funding or credit risk.

While that suggests a financial crisis is not underway, rising rates, particularly after a long period of extraordinary ease, push up the risk of financial accidents. Today, visible signs of an emerging balance sheet problem are hard to spot. Delinquencies, charge-offs, and bankruptcies remain modest. Credit spreads remain compressed. And capital ratios remain healthy. However, the conditions are more and more accident-prone—we can never dismiss financial risks.

The world will remain weird in 2023

Seeking value from planning, rather than plans, is even more important today as the economic environment continues to be exceptionally unusual, not to mention seemingly more prone to shocks.

The economy is still adjusting to the pandemic shock and the subsequent policy response. New complications created by a clash of tailwinds and headwinds (strong labor markets, geopolitical energy shocks, and aggressive policy tightening) make it unlikely that we’re entering calm waters soon.

However, barring new overpowering shocks, the path ahead need not be as dark as frequently painted. Europe’s recession stands a chance to avoid the most damaging outcomes while building out of cyclical weakness into structural strength: Monetary policy may permanently escape negative interest rates; the labor market may remain tight; and investment may strengthen to address structural challenges—three areas in which Europe has faltered in the past.

In the U.S., the cyclical path still contains a plausible “soft landing,” an outcome where job openings are falling while the unemployment rate remains low, though a recession is also likely.

The challenge for both the U.S. and Europe is that the road ahead is long. Europe will live in the shadow of a geopolitical energy threat, and the easing in cyclical tightness in the U.S. will take time. These are hazardous and unpredictable paths that require not just a plan, but plenty of planning.