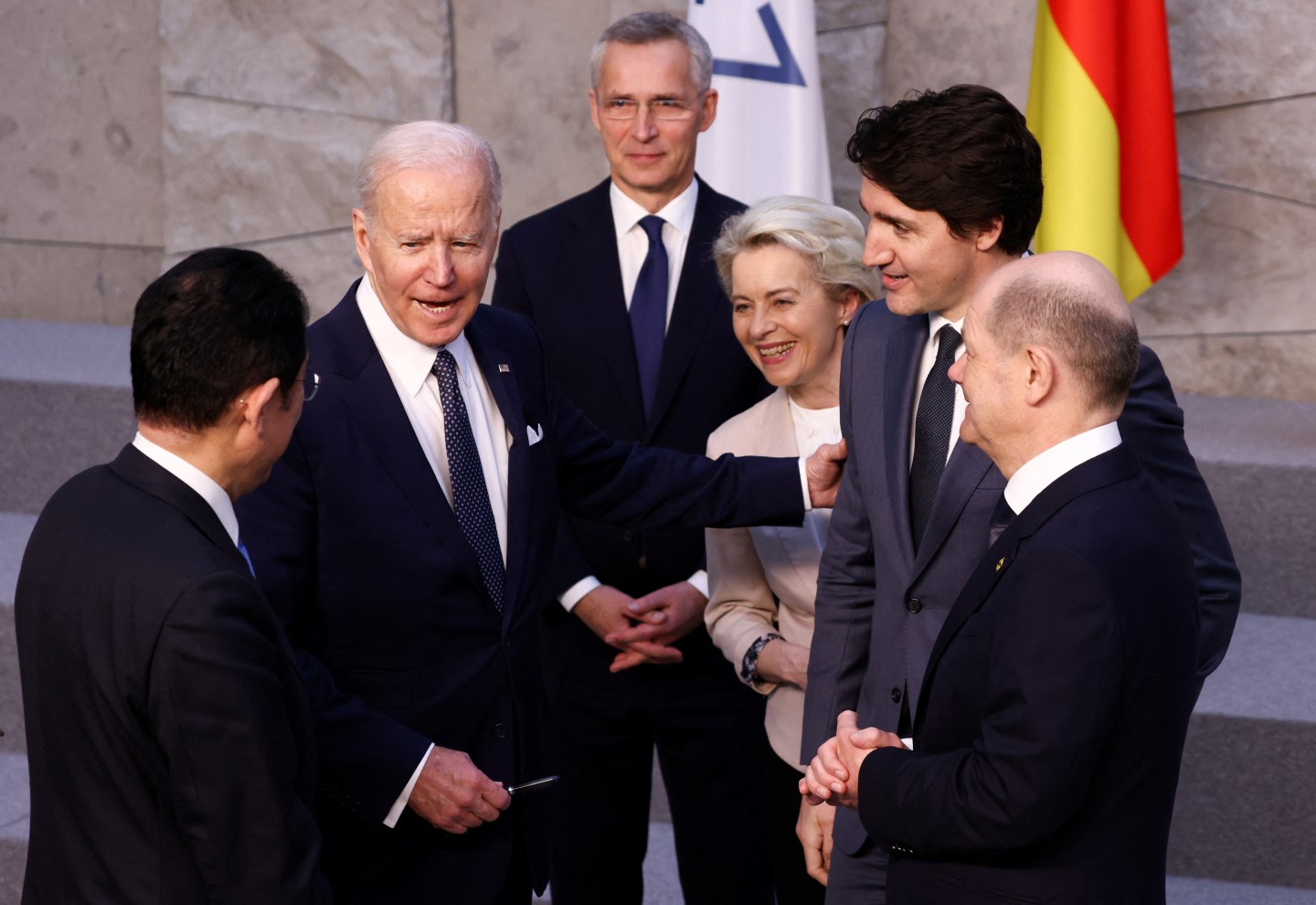 Rudyard Kipling’s The Jungle Book explained how leaders and groups need each other for power: “For the strength of the Pack is the Wolf, and the strength of the Wolf is the Pack.” President Biden has breathed new confidence into allied unity and resolve—and has in turn been strengthened by our international allies.

Overcoming the self-destructive America First isolationism of our recent past, Biden has rebuilt trust through collective action. Most recently, America’s continued triumphs in international energy diplomacy—ranging from reining in OPEC+ to the successful rollout of the Russian oil price caps to helping the EU work through its gas supply challenges, all in the face of tremendous skepticism—have stabilized the global energy markets and brought down prices all while cutting into Putin’s profits.

These accomplishments remain underappreciated. Contrary to Putin’s hopes that Europeans would freeze with insufficient gas to heat homes, splintering allied unity, his gas gambit has thoroughly failed. Europe has secured enough supplies to avoid an energy crunch this winter, with the proactive help of the U.S. and the international coalition, as we correctly predicted months ago.

And contrary to the analysts who gloomily forecasted Saudi Arabia’s oil intransigence would drive prices up, Biden has proven his mettle by helping the G7 and 27 EU nations realize that oil-producing nations need to sell their oil at least as much as customer nations need to purchase it.

After 62 years of one-sided bullying in the marketplace, the U.S. and its allies finally banded together to fight back. Finally, the OPEC+ producers’ cartel has met its match with the first buyers’ cartel. Rather than try years of impossible global antitrust regulation where the U.S. has no legal jurisdiction, the Biden Administration is showing the power of countervailing market power to keep OPEC+ in check—all while dangling occasional carrots to the Saudis.

Most significantly, contrary to cynics who predicted a price cap on Russian oil would never work, or who continue to declare the price cap is too friendly to Russia, this week’s smooth, drama-free rollout (without any of the $400 oil drama some energy analysts forecasted coming to pass) not only makes allied sanctions work more effectively, but also enhances developing nations’ ability to afford oil with greater supply at better prices.

Major non-signatories of the deal benefit just as much. Russia’s biggest remaining customers, China and India, are not Russia’s friends, and their political declarations are different from their economic savvy. They do not have any desire to pay more to help Putin.

As we predicted three months ago, India and China are eager to ride the coattails of the G7 Russian price caps. We are already seeing China play hardball in negotiating better prices while others such as Indonesia have locked in $35-a-barrel discounts. As the Indian oil minister said, “My only moral duty is to my consumers.” Leveraging his newfound bargaining power to get better prices fits that agenda.

Thus, Putin is isolated. Paradoxically, only Iran and Saudi Arabia are helping him proactively—but they are mortal enemies and they have no need for a single drop of Russia’s oil.

Some skeptics continue to obsess about “side deals” evading the oil price cap, but that misses the point. It is about cutting off Putin’s profits, not cutting off all Russian oil. As the Treasury Department official who devised the price cap, Assistant Secretary Ben Harris, pragmatically explained, “Whether [a drop in Russian oil profits] happens by selling under the price cap at a prescribed level, or whether it happens through increased leverage by other consumers of oil, really is fine with us either way.”

Much has been made about logistical challenges. However, the enforcement of this ingenious Russian-targeted price cap is astoundingly easy to police. A handful of EU companies control the major oil tankers for shipping, the needed maritime insurance, and the key energy brokers. For these companies to be allowed exemptions from the new oil sanctions against Russian oil supplies, they must certify the cost of the merchandise to be shipped to customers. Alternative “ghost” tankers do not really exist in any scale and are as expensive as they are small, old, and unreliable. Even if the Russians were to indemnify them, they would not be allowed free passage and safe harbor to deliver to most customers.

Putin did not see this coming. He is no “energy czar.” Every dollar trimmed from the price of Russian oil reduces his revenue by around $2 billion. His continued threats to shut down oil production are empty howls. If he did so, with 66% of his tattered economy dependent on fuel sales, he would shutter the remaining activity of his isolated regime. The average wealth per capita in Russia was already low. It’s now falling fast.

Having already erased 30 years of assimilation into the global economy, Putin has lost all superpower stature and is now merely an impoverished warlord. His nuclear warheads do not make him an economic superpower any more than weapons make Iran or North Korea a superpower. In 1911, Argentina controlled the two largest battleships in the world, but those weapons did not make it a superpower. And even with his nukes, as Ambassador Jim O’Brien points out, “Russia is unable to run a war in any modern terms” as sanctions and export controls continue to deprive Putin of critical warmaking technologies. None of this was supposed to happen. For months now, cynical professional energy analysts have attacked Biden’s energy policies or supposed lack thereof, forecasting crises and supply shocks that never came to pass. These analysts never gave the U.S. president much of a shot: When we tried to point out some of his under-the-radar energy accomplishments, even we were attacked for being naively Pollyannaish. And yet, somehow, Biden’s energy diplomacy triumphs continue, fortifying allied unity and resolve a year into the Russian invasion of Ukraine.