For the Fed, fighting inflation is imperative, but slamming the economy would be premature 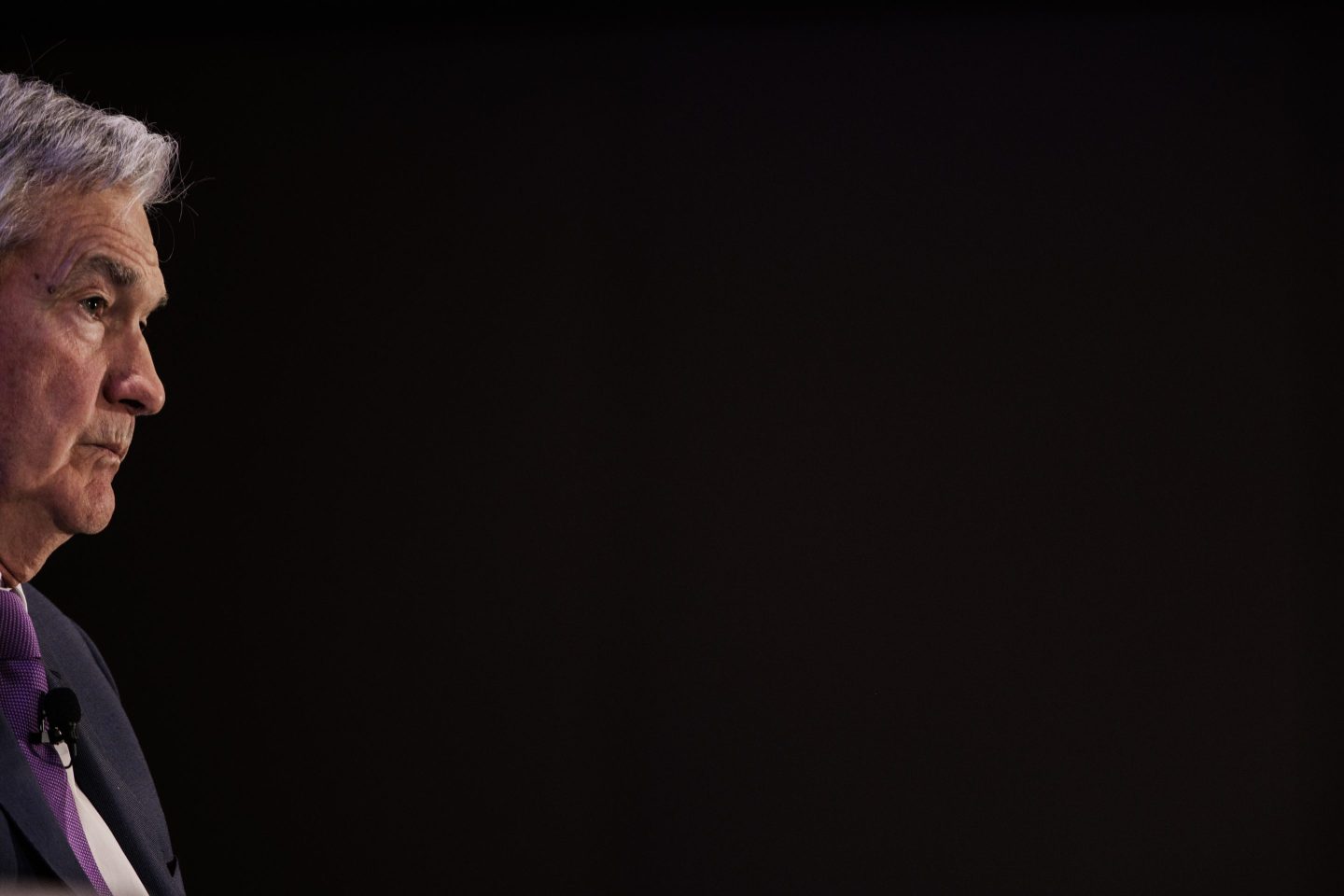 Federal Reserve Chairman Jerome Powell. The authors argue that it’s too soon for the Fed to take drastic measures to head off inflation.
Samuel Corum—Getty Images

With inflation stubbornly high and the war in Ukraine adding pressures, some are calling for a “Volcker shock” to insure against structurally high inflation. The Federal Reserve has no hope of delivering a soft landing, the argument goes, and should choke the economy into recession with shock treatment of very high interest rates, thereby wringing inflation from the system—much as then-chair Paul Volcker began to do with a surprise announcement one Saturday in October 1979.

Yet whether to take out such macroeconomic insurance—a recession is the price of eliminating the risk of inflation shifting structurally much higher—is a difficult call to make. Far from obvious, this requires calibration of that risk and of the cost of reducing it. It is also a question of when the right time would be to insure against such a structural break.

Today’s economy remains one battered by idiosyncratic stress, geopolitical conflict, and extreme uncertainty—so it may turn out that a Volcker shock is needed above and beyond what is already anticipated to be the fastest rate path since the 1990s. But deliberately triggering a recession today still looks like a move that would be premature. To see that, we need to understand the insurance options that policymakers face today and accept that the seemingly straightforward Volcker analogy isn’t so straightforward at all.

Post-pandemic policymaking is shaping up to be about big bets and gambles. In 2021 fiscal policy placed a big bet on a win-win-win scenario: Consumers would see strong wage growth in a booming economy; healthy businesses could pay for these wages with higher productivity growth, rather than by raising prices; and politicians would oversee a lengthy post-COVID expansion that would help them in their reelection. Higher growth and wages did result, but prices rose also, eroding real wages.

Now the burden has shifted to monetary policymakers. They have benefited from inflation expectation being anchored near their policy target of 2% for years, and they must not allow an inflation regime break—a shift of expectations far above that 2% target that would drive self-sustained high inflation. But should they do so by engineering a recession?

Like any buyer of insurance, policymakers need to consider the coverage, the risk of the event occurring, and the price of insuring against it. This translates to, How bad would a structural inflation break be, how likely is it, and how would its costs compare to the cost of a recession? Additionally, they must consider when to buy the insurance. Is it more compelling to have a recession now, or can policymakers wait and buy that insurance later at a similar price?

Far from easy or clear

The only aspect of this policy dilemma that is clear is the terrifying nature of an inflation regime break. A return of sustained high inflation, with high interest rates, weak fiscal power, crippled monetary influence, low asset valuations, sluggish growth, and other nasty side effects, is something no one should want.

But this is far from a certainty today. Inflation is high, and the commodity price surge reignited by Russia’s invasion of Ukraine likely prolongs this. Still, inflation remains significantly influenced by idiosyncratic drivers—just look at the exceptional overshoot in durable goods inflation, which is likely to normalize and will be aided by base effects in the middle of the year. And while the risks are growing as sticky and broad-based inflation pressures become uncomfortably high in services and in wages, long-run inflation expectations remain at healthy levels, suggesting that inflation hasn’t become entrenched. Markets still price inflation peaking this year and normalizing rapidly. One cannot credibly claim that inflation is not a structural risk today, but one can credibly claim that we’re not in the middle of a structural break today.

This means that insurance might be bought when in fact it may not be necessary. To be sure, insurance often buys peace of mind, but ultimately it is a question of cost, and that cost is high. It would involve a recession and a rise in the unemployment rate as well as potentially a sluggish recovery if that unemployment slack remained. Add to that the opportunity cost of missing out on a tight economy expansion where growth is strong, wages move higher, and investment booms, and we’re weighing the uncertainty of a regime break against the certainty of the cost of recession.

Why pay now if you can pay later?

There is also the vexing question of when to take out insurance. The argument for sooner is that as inflation becomes more entrenched, it will cost more to get rid of it. Calls to prepay are harder to justify if you can likely buy insurance later when there are clearer signs of an inflation regime break.

Unlike life insurance—which you cannot buy after a terminal diagnosis—protecting the inflation regime can be done even if the inflation regime began to break. The key here is long-term inflation expectations that, while higher, do not look unanchored from near the policy target of 2% today. If they did, an immediate imposition of draconian monetary policy would be appropriate—something we think the Fed would do.

If this policy dilemma appears intractable perhaps it helps to consider that the Volcker analogy is a partial misuse of history.

Paul Volcker, who became Fed chair in 1979 and successfully fought structurally higher inflation, was not delivering a recession to protect a healthy macro regime. Rather, he was paying the price of recession to clean up a bad macro regime that had its origins in the late 1960s and metastasized throughout the 1970s. The Volcker shock had no insurance character at all.

Had Volcker been appointed 10 years earlier, say, in 1969, and applied the same medicine, he would serve as a much better analogy for today’s challenges. But in 1967 the Fed actually delivered easier policy even as inflation remained too high, and unemployment rates remained extremely low—driven by a conceptual error in the form of the belief that policy was tight. Today we see a Fed that has begun to raise rates and appears planning to do so briskly to better position themselves to counter inflationary risk.

The Volcker analogy has other weak elements.

Second, central bank credibility. Volcker took over the Fed from William Miller—a Jimmy Carter appointee who Fed historians would certainly like to forget. Before Miller, the Fed was in the hands of Arthur Burns, who was Richard Nixon’s man, and was infamously caught on the Nixon tapes taking direction from the president, though his intellectual credentials were a good fit for the job. Today doesn’t look like that. Legitimate criticism can be leveled at Fed Chair Jerome Powell, but he has already had to stand up to some intense political pressure from Donald Trump and has been reappointed by President Biden, who has explicitly stressed the independence of the Fed—and is now looking at a steep rate path just as midterm elections loom.

Another difference today is that while modern central bankers are far from infallible, their understanding of the risks of runaway inflation and the clarity of their remit (to keep prices stable in the long run, even if that means recession) is better understood today than it was five decades ago.

What needs to be done?

Rather than forcing the recession now, we think sustained and orderly tightening must be given a chance. That means persisting on this path even when growth and inflation moderate.

This is an immense challenge but not an impossible one; there remains the possibility that a soft landing can be achieved that would allow for a tight economic expansion to continue. The upsides from this are too significant to ignore: broad-based income gains, strong productivity growth, and healthy investment.

And while an inflation regime break must be avoided, there remains a credible window to course-correct if long-term inflation expectations begin to break. The more significant reason why a Volcker shock is unwarranted today is not that there isn’t risk, but that the Fed can—and we believe will—impose the necessary recessionary policy if it becomes clear it is needed.

We don’t see reticence about emulating Volcker—whose daring policy helped deliver three decades of healthy inflation dynamics—as a call for dovish policy. The case for tightening is overwhelmingly clear; the question is how to do it. Sustained and orderly tightening that persists until the objective is met is the answer, not a Saturday surprise.