The Fed isn’t likely to let inflation skyrocket, no matter what the doomsayers think 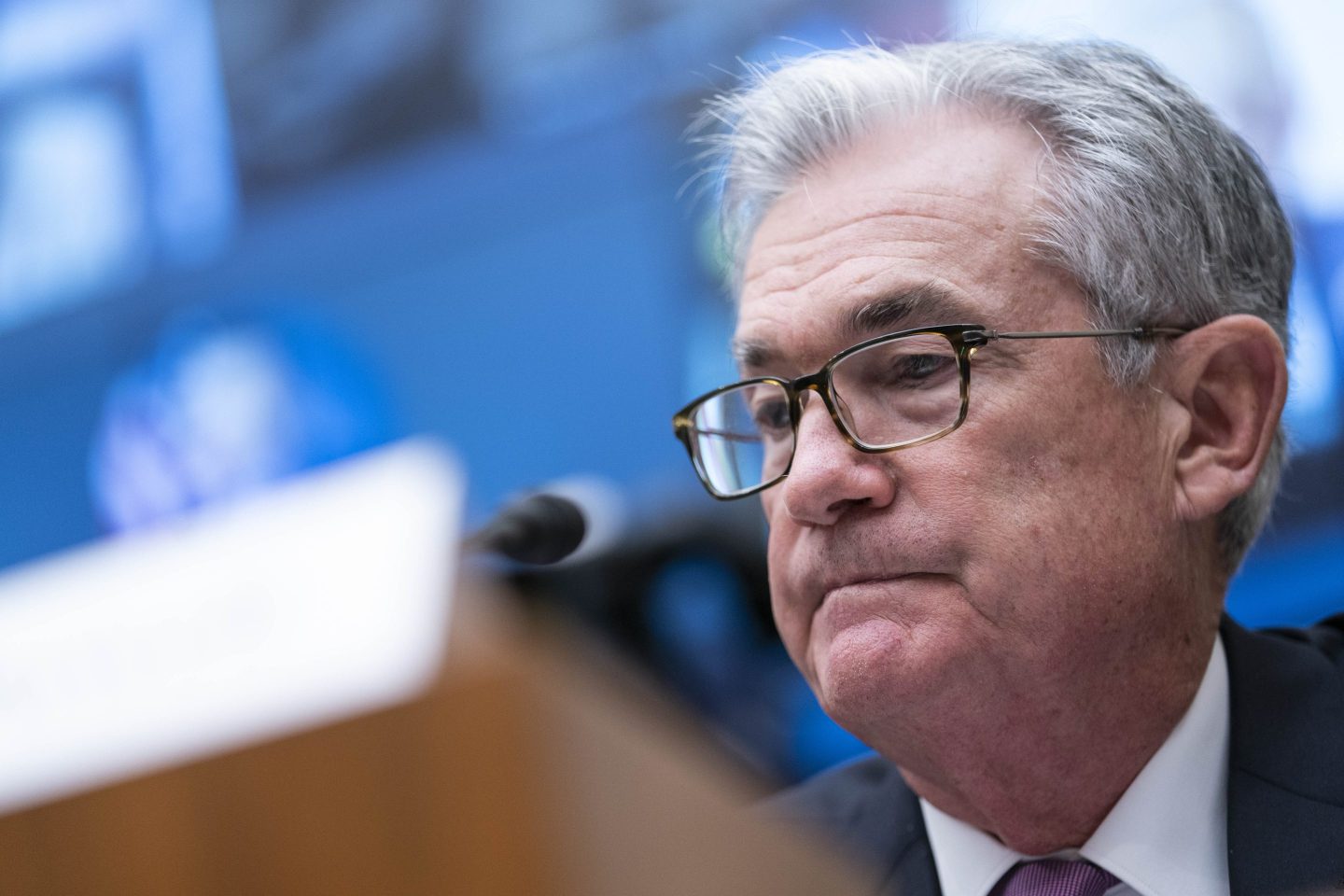 Jerome Powell, chairman of the U.S. Federal Reserve, testifies during a House Financial Services Committee hearing in September 2021. “A political decision is looming about Powell’s reappointment—or replacement—allowing the topic of the Fed’s political independence to cast a shadow over the inflation debate,” the authors write.
Sarah Silbiger—UPI/Bloomberg/Getty Images

After a summer hiatus, inflation fears are back with a vengeance. Repeated high inflation prints seemingly support the doomsayers’ case. To them, the Federal Reserve has already committed a serious “policy error”—a misreading of the data that will allow prices to spiral out of control. To complicate matters, politics is injecting itself in an uncomfortable way. A political decision is looming about Jerome Powell’s reappointment—or replacement—allowing the topic of the Fed’s political independence to cast a shadow over the inflation debate just as we approach a midterm election year.

To gauge whether the current path could return the U.S. economy to a world of structurally high inflation, last seen in the 1970s and early 1980s, it is helpful to spell out a set of scenarios. While a structural regime break is one possible outcome, it remains a far smaller part of the risk distribution than headlines might make one believe.

The first scenario is simple: Current high price growth will fade away as the economy recovers from the dislocations suffered at the hands of the pandemic. This transitory narrative is roughly the position of the Fed and can appear complacent. How could they know that inflation is not already metastasizing?

In fact, the Fed cannot know, and neither can anyone else. But there are some good reasons that make this scenario more than just wishful thinking. To see why, consider two analogies and ask: Which describes today’s situation better?

The first is the late 1940s. World War II had wreaked havoc on supply and demand. When the war ended, consumption exploded, but it took time to reorient production to a consumer boom. Inflation spiked—to near 20% (peaking in March 1947)—then came down as the economy adjusted; no structural break in inflation.

Contrast that with the late 1960s. A long-running economic cycle delivered very low unemployment rates and strong wage growth that spurred inflation. Despite this, the Fed eased policy at the first sign of weakness, and inflation moved higher and eventually became unhinged. Structurally high and unanchored inflation was widespread by the time the 1970s oil shocks finished off any remaining foundations of a healthy inflation regime. It took double-digit interest rates and severe recessions in the early 1980s to wring inflation out of the economy.

Though headlines have clearly settled on doom and structural break, a lot of evidence supports the idea that we’re in the middle of a 1940s-like situation. Today’s economy is bouncing back from a systemic shock with a demand boom, while creaking under the pressures in product and labor markets, where demand and supply normalize at different speeds.

A few data points back this up: Price growth is narrow, as the price surge has been driven by a smaller set of items most influenced by reopening. Encouragingly, recent core month-over-month inflation prints have moderated markedly—running just above an annualized 2% growth rate. Meanwhile, the year-over-year inflation prints must stay high for some time. Their first opportunity to decline significantly will be April and May of next year—because those were the months this year when prices soared.

The Fed is still on watch

To many, the transitory inflation scenario seems too optimistic. Yet, it would be a mistake to believe there is only the binary alternative of a 1970s-style structural collapse.

Rather, in a second scenario inflation would not moderate but would remain elevated and broaden across the consumption basket. In that case, it would be incumbent upon the Fed to accept a new reality of sticky inflation—and act on it. The Fed would live up to its mandate of price stability by raising rates more aggressively than planned. As the right dose of required monetary headwind is exceedingly hard to gauge, this would risk a sharp slowdown and even a recession.

How likely is it that the Fed acts as an emergency brake—or fails to do so? Policy errors happen and cannot be dismissed. Too lagged and unreliable are the data on which central bankers rely to steer the economy. And sometimes they are reluctant to act decisively because the risk of policy error cuts both ways. Consider the European Central Bank (ECB) in 2011, which, spooked by an inflationary overshoot, hiked rates and delivered a double-dip recession.

However, given the centrality of the unfolding debate and painful awareness of the risks of a structural inflation problem, it is difficult to imagine the Fed sitting idly by as inflation became entrenched. Returning to our late 1940s example: Though inflation had come down most of the way, a recession began in December 1948 that is partially attributed to preceding monetary tightening.

What could lead the Fed astray?

Sometimes policy errors persist, and when that happens they can lead over time to the kind of structural regime break that rightfully is so feared and loathed. There are two paths into such a third scenario.

The first is conceptual in nature. Rather than a one-off misreading of the data, the central bank believes it’s doing the right thing and thus doubles down on errors already committed.

Such a conceptual error was a big part of how the inflation regime broke down in the late 1960s. Perceptions of the economy’s capacity were overstated, and a mistaken belief persisted that unemployment could be pushed lower still. Policymakers believed they were already in tight monetary policy when in fact it was much too loose.

What might underpin a conceptual mistake today? Economics is unlike physics or chemistry, where many core principles are well known and stable. For instance, the interest rate at which policy turns tight, or how low the unemployment rate can go without overheating the economy—variables known as r* and u* in the trade—are guesstimates at best.

Plausible conceptual errors could be a growing belief that a productivity boom—akin to the late 1990s—is shifting up the economy’s capacity, thus conceptually justifying loose policy. New conceptual errors could emerge if central bankers are nudged to tackle other real challenges. Those could range from climate change to inequality—pressing problems for which central banks’ tool sets are of limited use and would create competing objectives.

Could the Fed be compromised?

The other path into the third scenario of a structural regime break is political pressure that distorts the objectives of the central bank.

Central banks’ modern institutional design is hyperconscious of the value of independence. It is understood that politicians have a shorter (electoral) time horizon than the guardians of price stability and that they will rarely (if ever) decide to constrain the economy in the short run. History has many examples of monetary policy used for political gains, rarely is that compatible with price stability. For that reason, most advanced economies have settled on separating the executive from monetary policy decisions.

But central bank “independence” is just an idea, and even when codified it’s only as strong as the behaviors that back it up. The Fed has a colorful history of being pressured by presidents—ranging from LBJ leaning on Fed Chair William McChesney Martin in the 1960s, to Nixon installing his own man at the Fed, Arthur Burns. Even Paul Volcker, who tamed the Great Inflation, came under pressure from Reagan.

To complicate today’s inflation outlook, President Biden has an opportunity to reappoint or replace Jerome Powell, whose term ends in February 2022, the start of a midterm election year.

Central bank independence is a rarefied jewel in Washington as it retains respect and support amongst both parties. This bipartisan respect was threatened when Trump broke with the tradition of reappointing the chair, tapping Jerome Powell to replace Janet Yellen. This risk grew when Trump took to publicly trashing Powell and the institution when Powell did not accede to his open demands for rate cuts. This introduced a rather more public version of the political pressure that realistically has always been meted out behind the scenes.

Is President Biden likely to follow in Trump’s footsteps and install his own Fed chair? And if so, would that put us on a path of synchronized fiscal and monetary policy to further the aims of an administration over price stability?

It cannot be ruled out, but the risk is quite low. Biden has already publicly acknowledged the importance of Fed independence, and Powell’s reappointment is an opportunity to rise above such suspicions. And even if he did, the Fed chair—though wielding significant power—does not make interest rate decisions alone but as part of a committee of voting members that are not all politically appointed.

Today’s economic whiplash squares well with the first scenario of an inflation that fades as a wrenched economy normalizes. Pessimists dismiss it at their peril. But if inflation broadens and remains elevated, a scenario that cannot be dismissed either, expect increasingly forceful pushback from the Fed, which would contain inflation but do so at the risk of triggering a recession. This leaves the least likely path forward being a structural regime break where inflation becomes unhinged as it did in the 1970s. While this is not impossible there has not yet been time for a sustained policy error that would be required.

Philipp Carlsson-Szlezak is a managing director and partner in BCG’s New York office and the firm’s global chief economist. Paul Swartz is a director and senior economist at BCG Henderson Institute in New York.