‘If you’re in tech, buckle up—it’s gonna be a tough ride’: The analyst who says Big Tech’s layoffs show ‘a new reality’ sees ‘more cuts’ ahead 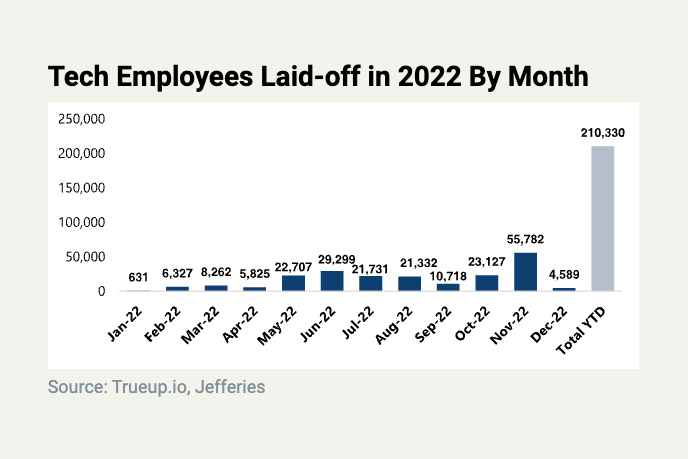 Around 210,000 tech employees have been laid off this year, analysts wrote, citing TrueUp.
Courtesy of Jefferies

That’s frightening, but what does that mean?

“The new reality is that demand is fading,” Brent Thill, the lead analyst on the note, told Fortune. “And employee hirings have been so brisk that if we’re effectively headed into a recession, it’s only inevitable that we’re going to have more cuts.”

Around 210,000 tech employees have been laid off this year, with a whopping 40% of them coming in the fourth quarter, analysts wrote, citing data from TrueUp. Jefferies’s analysis found the average company in its internet and software coverage universe has 36% fewer job listings now than at the start of this year. Thill said it’s a signal of the “excess” that tech brought on during a “period of easy money.”

Among the tech megacaps, Meta announced its plan to lay off 11,000 employees—a 13% headcount reduction. Amazon has started layoffs of a reportedly similar size, although it’s still unclear how big the company will ultimately go. Meanwhile, Microsoft has announced two rounds of layoffs this year, with the latest in October cutting 1,000 jobs.

Google is the only mega-cap tech company that has not announced layoffs, Jefferies pointed out, although it noted that it implemented a hiring freeze earlier this year.

“You’re seeing continued evidence that large, medium, and small companies are all in a rationalization period of what’s happening,” Thill said, adding that “the demand is not there and their cost pressures are out of line.” The Jefferies note contrasted these big three firms’ headcount in contrast with their falling revenues, illustrating the mismatch—and the rationalization that needs to happen.

And the reductions in headcount stem from overhiring during the pandemic, which the analysts note are needed to “regain operating efficiency with a headcount that matches current demand trends.”

“If your revenue per employee is failing because revenue is not there, then you slow headcount,” Thill said.

And both Amazon and Meta underperformed in their third quarter earnings of this year—quite a shift from their pandemic-era success.

“I think this is kind of what really separates the true athletes from the amateurs,” he said, reminiscent of Warren Buffett’s famous “swimming naked” aphorism about how a down market exposes a lot of things. Still, Thill said there will be more layoffs to come, and he doesn’t know how big that number will get—but it’s going to be a lot higher.

“If you’re in tech, buckle up—it’s gonna be a tough ride,” he said. “And you better make sure you show up on the top of the efficiency page because they’re looking and this isn’t the first wave of cuts.”

Jefferies’ house view is that the economy will head into a recession in the third quarter of next year. So the recession hasn’t even hit, Thill said, and “technology companies have been notoriously too bullish.”

“We’re not trying to be dramatic,” he said. “We’re not trying to draw attention. We’re just trying to be realistic, which is [that] these companies have to get the cost structure in line because in the economic downturn, if they can’t control the revenue, there’s only one thing that they can control. And that’s expense. And the number one expense in tech are the people.”

Still this “new reality” for the tech industry is a natural part of an economic downturn—and tech is not “immune,” Thill said.