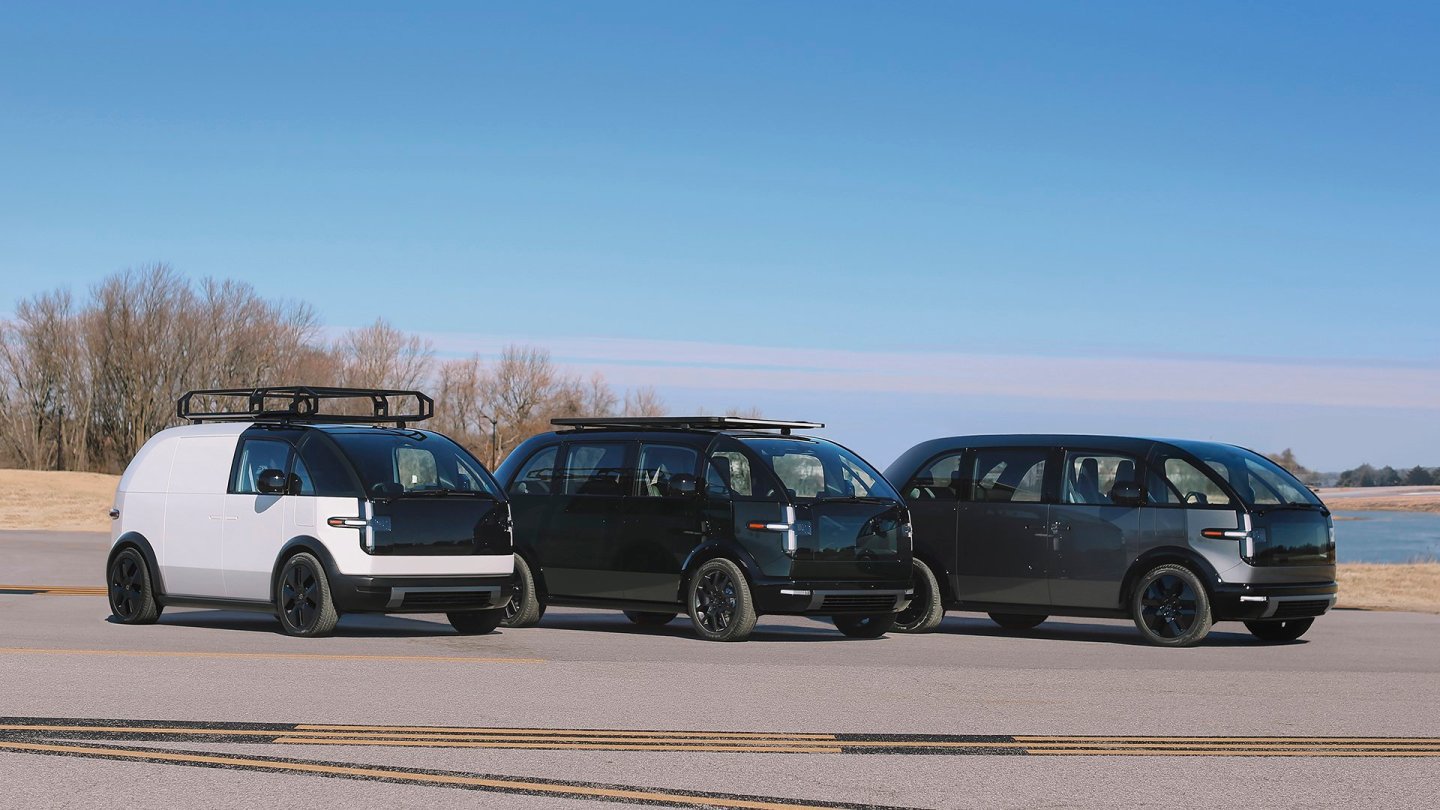 Canoo has said it will complete its first 15 vehicles before the end of the year.
Courtesy of Canoo

In mid-November, fans of the electric vehicle company Canoo waited in anxious anticipation:

This was the big day they had been waiting for.

On Nov. 17, Canoo was finally going to start production on the futuristic campervan-style vehicles the EV company has been talking about for years.

“Come on Tony, keep your promise,” one user wrote on a Reddit page dedicated to Canoo fans, stating that they hoped Canoo’s public relations department would make a big splash around the milestone. After all, Canoo CEO Tony Aquila had assured the public on the company’s earnings call earlier last month that Canoo had $2 billion in back orders for its vehicles and that it was expecting to reach 20,000- unit capacity in 2023. Competitors like electric SUV company Fisker Ocean, which also started production in early November, put a big emphasis on the milestone with a slew of media publications covering the event. Canoo has certainly made a lot of noise around some of its other announcements, including its contracts with Walmart and Zeeba for its delivery vehicles, or even its announcement a few weeks ago that it would purchase a manufacturing facility in Pryor, Okla. (You can read all about Canoo’s troubled past in Fortune’s recent feature here.)

But for what would seemingly be a major milestone for the company, Nov. 17 came and went. Apart from a short internal email Aquila blasted to all Canoo staffers, seen by Fortune, Canoo drew no attention publicly to its start of production until the following day, when it posted a tweet and Facebook post.

Canoo’s lackluster announcement may have something to do with internal challenges which could make it difficult for the company to meet its own production goals—to complete more than a dozen vehicles before the end of this year. Internal documents sent to hundreds of staffers across the company this week and seen by Fortune show that Canoo’s manufacturer, as of Monday, was missing a series of parts for Canoo’s first electric delivery vehicle, and an internal financial document and lawsuit filings show that Canoo has been delinquent in payments to suppliers.

A spokeswoman for Canoo says the company is “not a hype machine.” “We tailor our media releases based on the specifics of the given milestone. As stated in our earnings call, this is a limited production in Michigan of 15 vehicles…Unlike some companies, we only make a big splash when we believe there is something that merits it. It is hardly a secret that there is a global supply-chain issue…We are not immune. Having said that, there is no interruption to our scheduled customer deliveries.”

Aquila had announced to investors on the latest earnings call that Canoo would roll out its first 15 vehicles before the end of 2022—vehicles earmarked for Walmart, NASA, and other customers. But a slide deck distributed internally on Monday and seen by Fortune stated that Canoo’s third-party manufacturer, Roush—which is based in Livonia, Mich.—was still missing several parts for the very first delivery vehicle on the production line. Notes on one of the slides stated that Canoo was sending three salvaged parts from Torrance, Calif., where Canoo is currently headquartered and keeps many of the test-stage vehicles it has built. And, as of Monday, only one of the cabins for the delivery vehicles in production was physically at Roush, while others were with other suppliers, the documents stated.

The Canoo spokeswoman says that the information contained in the internal documents distributed around the company on Monday is “incorrect” and that there are multiple vehicle tophats at Canoo’s facility. “This is just one example and proof that the information on the documents you have that are marked preliminary, contain information that as of Monday was inaccurate. To be clear, we do not use salvage parts for our production. We completed our first vehicle build today and are on track to deliver to customers on schedule. As with most companies, our production works on a just-in-time manufacturing model to reduce parts storage costs.” When requested by Fortune, the spokeswoman wouldn’t provide any documents that corroborated her statement, stating that they “contain non-public, proprietary and confidential information and cannot be shared.”

Many vehicle companies, including General Motors or Rivian, are struggling with supply chain backlogs—and several of the EV companies that went public via SPAC in the last two years are desperate for cash infusions.

For its part, Canoo was late on payments to at least a dozen of its suppliers as of late October, according to an internal financial spreadsheet seen by Fortune. Canoo indicated in entries on the spreadsheet that many of those suppliers had stopped conducting work for Canoo or that the late payments were expected to have an impact on the production schedule of Canoo’s vehicles. (When asked about the spreadsheet, the Canoo spokeswoman said that “your source has incomplete or inaccurate information. We are on track to meet customer expectations.”)

A new lawsuit filed in October, which has not been previously reported, shows that late payments are causing tension between Canoo and at least one of its former suppliers. AVL, which last year had been developing safety features for Canoo vehicles, sued Canoo a few weeks ago for allegedly failing to make nearly $4.8 million in settlement payments after AVL and Canoo terminated their contract earlier this year, legal documents show.

“AVL missed milestones and when product was delivered, the work was not acceptable,” the Canoo spokeswoman says of the companies parting ways. “This cost the company money and time so we made the decision to sever the relationship and bring the work in-house. We hold ourselves and our suppliers to the highest quality standards.” (The spokeswoman did not respond to a request for comment on whether Canoo had made the settlement payments to AVL.)

“At this stage in the process AVL stays away from any public comment regarding Canoo’s production or behavior at this point,” an AVL spokesman said.

Canoo is speeding up plans to move its manufacturing capabilities in-house, which would reduce its dependence on third parties. In October, Canoo notified the National Highway Traffic Safety Administration that it would soon start manufacturing its own vehicles at the beginning of 2023, according to the regulator’s database. And two weeks ago, Canoo announced that it was planning to purchase a pre-existing manufacturing facility in Pryor, Okla. Canoo has been planning to build out its own facilities in Oklahoma and Bentonville, Ark., but neither of those facilities is far along at this time.

Canoo has been running at steep losses and has been experiencing high executive turnover since the company went public via a SPAC merger at the end of 2020, right around the time that Aquila invested in the company through his private equity firm and took over as chairman, and later CEO. Court documents made public earlier this year confirmed that Walmart heiress Alice Walton is financially tied to Aquila’s private equity firm.

In its most recent earnings report, Canoo reported a net loss of more than $400 million for the nine months ending in September. The EV company says it has accumulated a deficit of $1.1 billion and will need additional capital to keep its doors open for the next 12 months.

“The last two quarters have been very tight,” Aquila said on the earnings call.

And now for December’s cartoon…

Clarification Dec. 1, 2022: The online version of this newsletter has been updated to clarify that events that took place in November were last month.

- Vial, a San Francisco-based contract research organization, raised $67 Million in Series B funding. General Catalyst led the round and was joined by investors including Byers Capital, BoxGroup and others.

- ​​Teampay, a New York-based purchasing platform, raised $47 million in Series B funding. Fin Venture Capital led the round and was joined by investors including Mastercard, Proof Ventures, Trestle, and Espresso Capital.

- SPHERE Technology Solutions, a Newark, N.J.-based cybersecurity company, raised $31 million in Series B funding. Edison Partners led the round and was joined by Forgepoint Capital.

- Pangea Cyber, a Palo Alto, Calif.-based security services provider for cloud and mobile app developers, raised $26 million in Series B funding. GV led the round and was joined by investors including Decibel and Okta Ventures.

- ResortPass, a New York-based hotels and resorts access provider, raised $26 million in Series B funding. Declaration Partners and 14W co-led the round and were joined by investors including CRV and other angels.

- CommonGround, a Los Altos, Calif. and Tel Aviv, Israel-based virtual communications and online collaboration company, raised an additional $25 million in funding. Marius Nacht led the round and was joined by investors including Grove Ventures, Matrix Partners, and StageOne Ventures.

- Treecard, a London, U.K.-based debit card company that plants trees with purchases, raised $23 million in Series A funding. Valar Ventures led the round and was joined by investors including World Fund, EQT Ventures, Seedcamp, Episode 1, and other angels.

- Shield, a Tel Aviv, Israel-based workplace intelligence platform, raised $20 million in Series B funding. Macquarie Capital led the round and was joined by investors including UBS Next, Mindset Ventures, and OurCrowd.