A.I.’s industrial age is dawning. These tech executives can help you navigate the new era 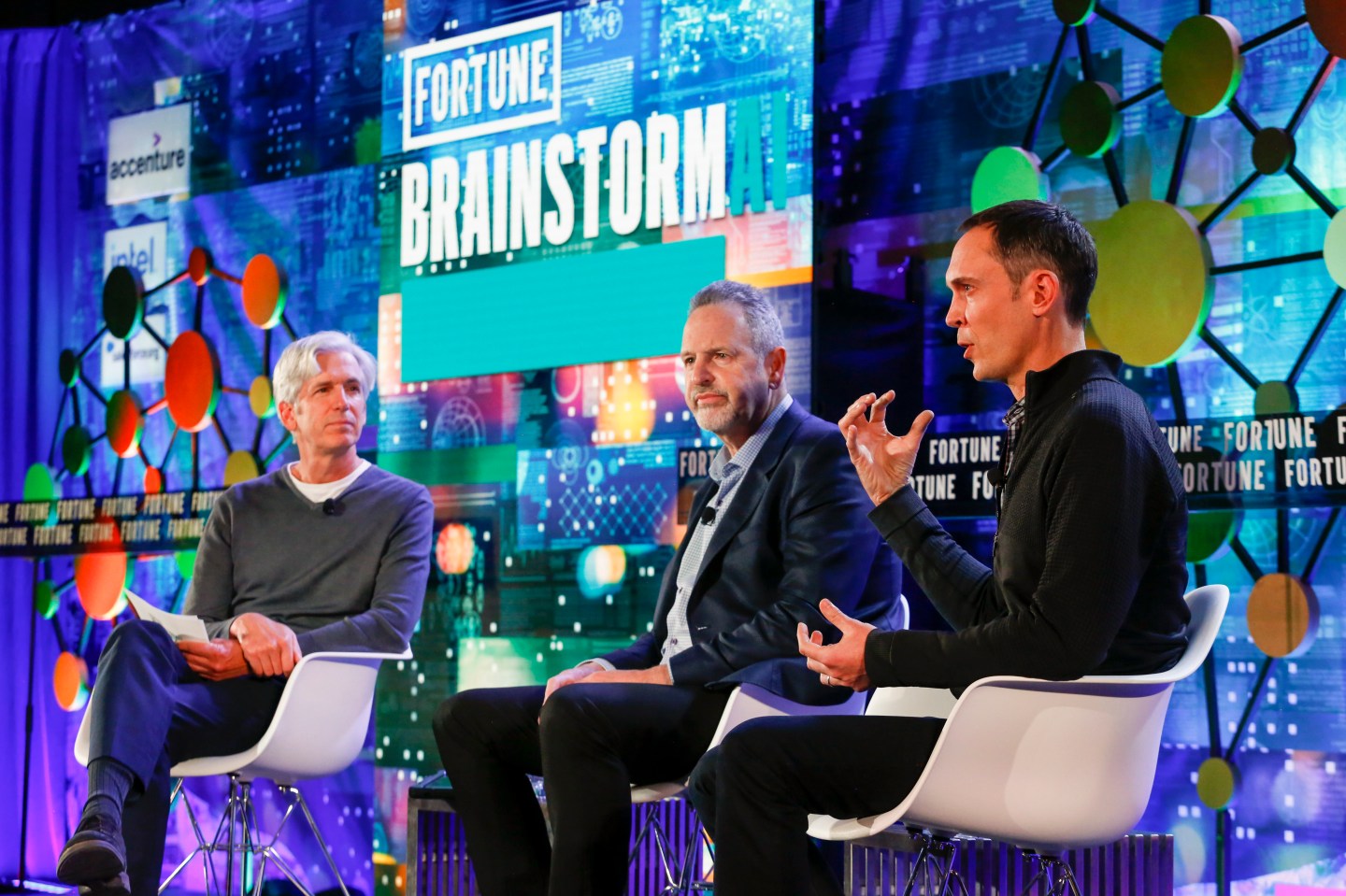 Fortune’s Verne Kopytoff moderates a panel with Rene Haas, then president of the IP products group at Arm, and Andy Hock, VP of product at Cerebras Systems, at Fortune Brainstorm A.I. in Boston, Nov. 8, 2021.
Rebecca Greenfield/Fortune

Artificial intelligence has come a long way in the past decade, but companies are still scratching the surface of its potential to reshape their business.

While A.I. is already deeply immersed in parts of our lives—social media accounts, health care, and e-commerce, to name a few—small and big firms alike have yet to fully integrate its best qualities into their day-to-day operations.

This idea rests at the heart of next month’s Fortune Brainstorm A.I. conference, Dec. 5–6, in San Francisco. (Applications to attend are still open, and Data Sheet readers can get a 20% discount off the regular registration fee by using the code “DSAI” in the additional comments section of the registration form.)

At the event, you’ll get the chance to hear from leading experts in the field about opportunities for scaling A.I. and embedding it within the fabric of corporate life. At the same time, experienced researchers and executives will warn about the numerous ethical issues that continue to plague A.I. development—and threaten to undercut trust in companies that fail to heed these warnings.

Among those scheduled to speak at Brainstorm A.I.:

—Fei-Fei Li, codirector of Stanford University’s Institute for Human-Centered A.I., who will dive into the business community’s power and responsibility to shape our world.

—Joelle Pineau, Meta’s co–managing director of A.I. research, who will explain how Meta is developing the technology for its future ventures, including the metaverse.

—Yael Garten, Apple’s director of A.I./machine learning data science and engineering, who will touch on how a $2 trillion company thinks about A.I.

This year’s Brainstorm A.I. conference arrives at a particularly interesting time for the industry.

The global business market for A.I. continues to expand at a breakneck pace, with IDC estimating compound annual growth at nearly 20% over the next several years. Even amid the current economic downturn, companies are still increasing their investments in A.I. given its potential for identifying efficiencies and fostering innovation.

Meanwhile, domestic and foreign policymakers are growing worried about the negative consequences of A.I. bias and abuse.

The White House made waves last month when it released an A.I. Bill of Rights, its blueprint for tackling five concerns about the technology: safety; discrimination; data privacy; information disclosure; and opt-out rights. (The Bill of Rights is nonbinding and carries no legal weight, though some departments in the federal bureaucracy are implementing A.I. regulations.)

Across the pond, members of the European Union have spent six months hammering out proposed regulations for higher-risk A.I. applications—legislation that, if passed, could impact companies and consumers around the world.

It all means there will be plenty to discuss next month at Brainstorm A.I. We hope to see you in San Francisco.

He’s not waiting around. New Twitter owner Elon Musk plans to lay off about half of the company’s workforce in the coming days, Bloomberg reported Wednesday, citing sources familiar with the matter. The job cuts, expected to total roughly 3,700 staffers, would dramatically reduce Musk’s expenses and allow him to focus more on core departments, such as engineering and design. Musk also is expected to end the company’s work-from-anywhere policy and order employees back into offices, with some exceptions.

Had to see this coming. Justice Department officials are expected to conduct an in-depth antitrust investigation into Adobe’s planned $20 billion purchase of digital collaborative design company Figma, Politico reported Wednesday, citing four sources with knowledge of the matter. Department officials have started contacting customers and rivals of the two companies and issued information requests, though it’s not yet clear when they might launch a formal probe. Federal antitrust regulators are currently suing or investigating several tech giants, including Apple, Amazon, Google, and Meta.

More bad chip news. Qualcomm shares sank 7% in midday trading Thursday after the chipmaker issued a weaker-than-expected outlook on the current quarter, CNBC reported. Company officials said a sharp decrease in smartphone demand and excess inventory were weighing on fiscal first-quarter projections. Qualcomm posted fiscal fourth-quarter earnings and revenue in line with Wall Street projections, and the chipmaker announced it will keep providing most iPhone modem chips in 2023 after Apple delayed plans to use in-house semiconductors.

An early grinch. Roku executives warned Wednesday that the company’s holiday sales likely would drop this year amid a pullback in advertiser and consumer spending, the Wall Street Journal reported. The comments from CEO Anthony Wood during an earnings call sent Roku shares down 1% in midday trading Thursday. Roku beat analysts’ third-quarter projections for earnings and revenue, though the streaming hardware and platform outfit still posted a net loss of $122 million.

The human element. The budding tech cold war between the U.S. and China is putting Chinese A.I. researchers in a tricky spot. Protocol reported Thursday that an increasing number of Chinese tech employees and students working in the U.S. are feeling squeezed by the geopolitical battle, which reached new heights in recent months following a series of export control measures implemented by President Joe Biden’s administration. Advocates for the export restrictions, which aim to limit China’s access to advanced semiconductors for A.I. applications, argue that the U.S. needs to establish its dominance in the tech realm ahead of China. But some university leaders and tech executives warn that the skirmish will limit their ability to recruit and retain Chinese computer scientists in a tight labor market.

People entrenched in A.I. research warn that turning a mission to attract Chinese STEM scholars into a battle for talent against China could backfire by alienating those researchers. And they fear that profit goals and anti-China rhetoric have clouded an otherwise richly collaborative environment that has helped advance A.I. research in the U.S. and globally, and fostered goodwill among Chinese students who historically have been eager to study in the U.S.

“You can’t have all the smart people in the world—the United States can’t,” said Nathan Myhrvold, who helped start Microsoft’s influential research lab in Beijing in 1998. “It’s a little bit like why I started the lab in China,” he said.

Brands are ‘quiet quitting’ Twitter over worries of what Musk will bring, by Sophie Mellor

Musk says Twitter will keep current bans in place through midterms, by Haleluya Hadero and the Associated Press

‘I want to know where the investors were.’ Uber whistleblower says company’s backers stayed silent as the company ‘broke democracy itself,’ by Chloe Taylor

The biggest iPhone factory in the world just got locked down, but some workers managed to escape days ago, by Prarthana Prakash

ReNew Power’s Sumant Sinha: ‘It’s time for the U.S. and India to lead on climate action,’ by Sumant Sinha

Another new way to shop. Amazon has found yet another place to burrow itself in your life: the eyeball. TechCrunch reported Thursday that the tech conglomerate has created the first third-party consumer application for smart contact lenses developed by Mojo Vision, integrating its Alexa Shopping List into the lens. The feature allows people wearing Mojo’s contact lenses to see their virtual grocery list, and add or subtract items by voice command. Admittedly, it’s all very experimental at this point. Neither Amazon nor Mojo is committing to the commercial viability of the idea, let alone rolling out a consumer product. But it’s an interesting window into the potential for such technology, as well as partnerships between augmented reality outfits and established tech giants.