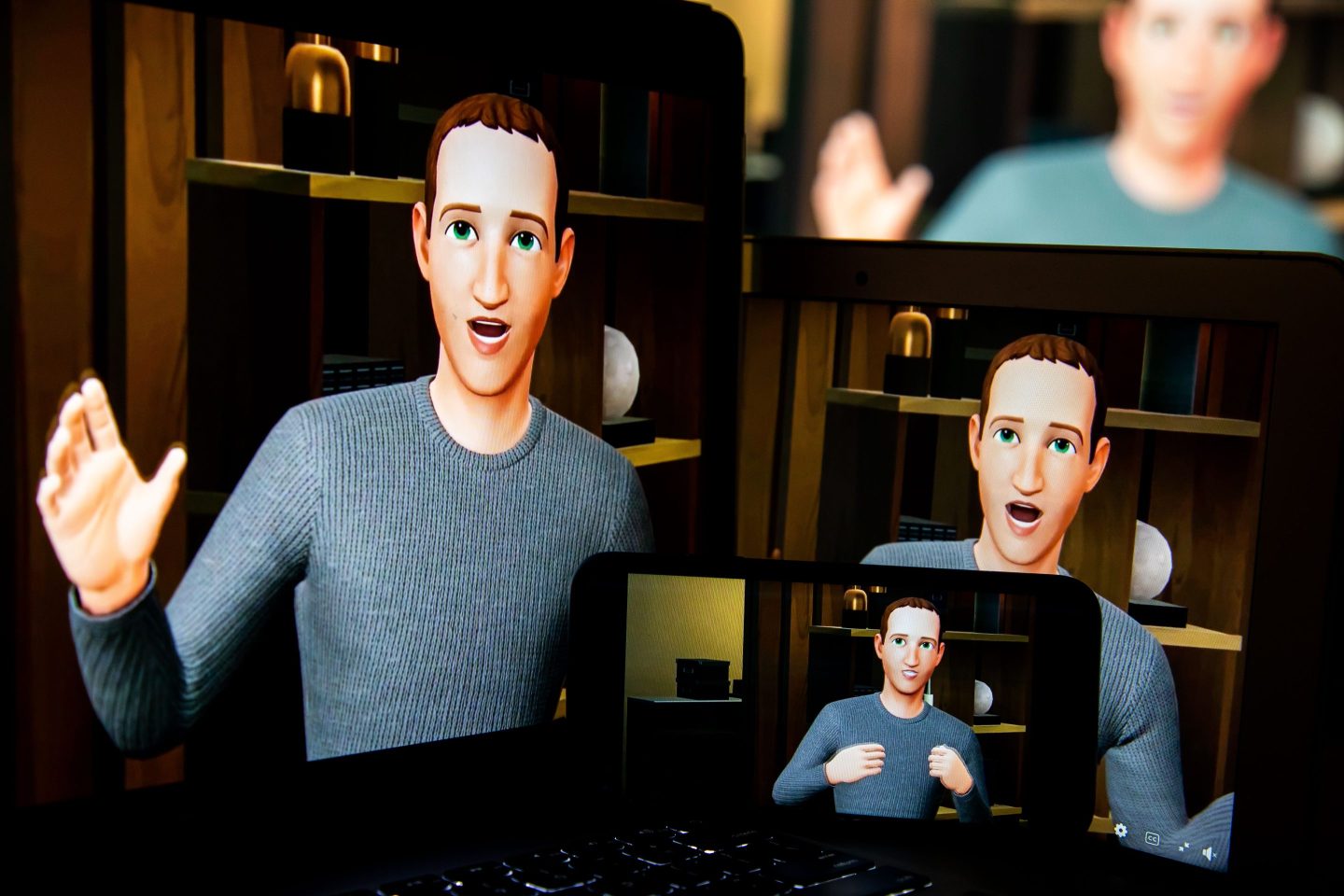 Mark Zuckerberg could have saved everyone time Wednesday and shouted just three words during Meta’s earnings call: Damn the torpedoes!

The self-styled captain of the S.S. Meta defiantly swatted away mounting calls to scale back the company’s metaverse-related investments, which led to an astounding $3.7 billion third-quarter operating loss on just $285 million in revenue for the unit. Zuckerberg’s refusal to retreat prompted a massive selloff of Meta stock—shares sank 22% in midday trading Thursday, wiping out more than $75 billion in market cap—and delighted the Twitter chattering class that takes pleasure in his financial pain.

The case against Zuckerberg’s stance is simple and coherent.

Meta is on track to lose roughly $13 billion this year on its Reality Labs division, which encompasses the company’s virtual reality, augmented reality, and metaverse units. Meanwhile, Meta’s Facebook and Instagram apps are struggling to produce solid revenue growth amid fierce advertising headwinds and mounting competition from TikTok. As a result, Meta’s third-quarter revenue fell 4% year over year, to $27.7 billion, and its net income tanked 52% year over year, dropping to $4.4 billion.

Ergo, Meta should cut back its Reality Labs spending.

But allow me to do the unpopular and defend Mark Zuckerberg.

When critics carp about Zuckerberg doubling down on the metaverse, I often wonder what else they want him to do.

Meta’s core business—ads on Facebook and Instagram—appears to have peaked. The company is nearing a saturation point of roughly 3 billion daily active users on its apps, with growth slowing significantly over the past two years. Its ability to make money off those users is slipping, as people flock to TikTok and harder-to-monetize short-form video takes off.

While Meta is trying to change with the social media times, largely by tweaking Facebook and Instagram to look more like TikTok, there’s little evidence to suggest the strategy will produce riches. Sensor Tower estimates show users are spending much more time per day on TikTok than Facebook and Instagram, with the trend lines moving against Meta. Pew Research Center surveys suggest teens—a key present-day and future demographic—have abandoned Facebook in droves and cooled on Instagram.

In the past, Meta might have bullied the competition by making a killer acquisition or copying another company’s ideas. Yet antitrust regulators at home and abroad are stymieing Meta’s M&A efforts—most recently illustrated by the Brits last week ordering Meta to sell recently acquired Giphy—and it’s too late to mimic TikTok and YouTube into oblivion.

Zuckerberg could simply coast on the success of Meta’s apps, which are still poised to produce more than $40 billion in operating income this year. For context, consider that Amazon’s companywide operating income in 2021 was $25 billion.

But Zuckerberg isn’t willing to slowly go down with the ship. (Really, is any Silicon Valley CEO?)

While he has built Meta into an advertising and social media colossus, Zuckerberg clearly remains perturbed by his company’s subservience to Apple and Alphabet. Those two companies, through their respective iOS and Android smartphone operating systems, wield unparalleled power over Meta and the rest of the digital economy. Case in point: Apple’s iOS privacy changes last year, which are expected to wipe out $10 billion in Meta revenue this year.

Meta can’t displace iOS and Android. So its next best option is to create a whole new operating system, one that replaces the smartphone. Zuckerberg believes that platform will emerge in some form or fashion from Reality Labs.

“There’s still a long road ahead to build the next computing platform, but we are clearly doing leading work here,” Zuckerberg said on Wednesday’s earnings call. “This is a massive undertaking, and it’s often going to take a few versions of each product before they become mainstream. But I think our work is going to be of historic importance and create the foundation for an entirely new way that we will interact with each other and blend technology into our lives, as well as a foundation for the long term of our business.”

Meta’s Reality Labs division could very well be carrying some dead weight. The metaverse may never float the boat of consumers or businesses. If it all comes to naught, Wall Street might pillage and plunder Meta for damning the torpedoes.

In the end, though, what other choice does Zuckerberg have?

He’s really, finally doing it. Public comments by Elon Musk on Wednesday and early Thursday seemed to solidify his imminent $44 billion acquisition of Twitter by the end of the week. The Tesla executive, who spent several months trying to back out of the deal, changed his Twitter bio to “Chief Twit” and posted a video of himself in the lobby of the company’s San Francisco headquarters on Wednesday. Musk also tweeted a message Thursday morning directed to advertisers fearful of his approach to content moderation, telling them that the Twitter platform “cannot become a free-for-all hellscape, where anything can be said with no consequences.”

Headed to the junkyard. Autonomous vehicle technology company Argo A.I. is ceasing operations after its two primary owners, Ford and Volkswagen, said they would no longer invest in the company, Bloomberg reported Thursday. The shutdown marks an abrupt reversal of fortune for Argo A.I., which was seen in recent years as a promising upstart in the autonomous vehicle field. However, Ford executives have grown frustrated with the lack of progress in producing a commercial self-driving product, which doesn’t appear close to reaching the market.

Overpromising and under-delivering? The Justice Department is conducting an ongoing criminal probe into claims that Tesla executives overstated the capabilities of the company’s Autopilot assisted-driving system, Reuters reported Wednesday, citing sources familiar with the inquiry. The investigation followed more than a dozen crashes, including some that resulted in deaths, that occurred when the Autopilot feature was in use by drivers. Tesla has said drivers must be cognizant that Autopilot is not a fully autonomous system, though some of the company’s public statements have left consumers with a different impression.

Making its way back. Shopify shares surged 17% in midday trading Thursday after topping analysts’ revenue forecasts and posting a smaller-than-expected operating loss, MarketWatch reported. The Canadian e-commerce company benefited from strategic spending cutbacks and an improving outlook for online sales. Shopify’s stock price is still down 75% year to date after a sharp selloff in the first half of 2022.

A potential game changer? The Netflix-ization of video gaming is already profitable for its chief proponent. The Verge reported Wednesday that Microsoft Gaming CEO Phil Spencer revealed the company is making money off its subscription service Game Pass, which gives Xbox and PC users access to a library of titles for a monthly fee. Microsoft launched Game Pass five years ago, beating chief rival Sony to market, and it has revved up its push for the service amid advances in cloud-based gaming. Spencer said Xbox Game Pass accounts for about 10% to 15% of the division’s content and service revenue, though he doesn’t expect that figure to dramatically increase.

It’s a rare insight into Microsoft’s Xbox console and Game Pass subscription businesses, particularly as Spencer suggests Xbox Game Pass won’t dominate Microsoft’s gaming revenue. There’s a reason for that, as there are only so many Xbox console owners that can subscribe to the service.

“We’re seeing incredible growth on PC…On console, I’ve seen growth slow down, mainly because at some point you’ve reached everybody on console that wants to subscribe,” explains Spencer.

Snap CEO Evan Spiegel slams Zuckerberg’s $15 billion metaverse as the ‘last thing I want to do when I get home from work,’ by Chris Morris

YouTube’s richest creator MrBeast is seeking a $1.5 billion valuation in what could be a massive milestone for influencer-led business, by Alice Hearing

Peloton will no longer play Kanye West songs as it becomes the latest company to distance itself from the rapper, by Chris Morris

Meta fined $25 million for failing to reveal the buyers and targets of political ads it ran, by Gene Johnson and the Associated Press

TikTok found not liable for death of 10-year-old girl who tried ‘Blackout Challenge’ she found on site, by Robert Burnson and Bloomberg

A sweet semi-sendoff. Twitter users are getting a little hyperbolic about the dawning of “zero hour” on the platform ahead of Elon Musk’s imminent takeover. (He’s not going to blow the whole thing up on Saturday!) But the meme did produce one of Twitter’s best pieces of recent content Wednesday night when NBC News reporter Ben Collins asked his followers to “post your favorite tweets and give them a little kiss goodbye.” The request started a thread with 5,000-plus responses, as users reminisced about the funniest, strangest, and most classic comments to grace our timelines. While we’re here, I’ll add my personal (and admittedly immature) choice: a father’s single-tweet opus about his 7-year-old weaponizing the phrase “deez nuts.” And though I haven’t consulted her, I’ll tack on my wife’s oft-cited favorite: when The Office actor and writer B.J. Novak snarked “I wonder what ‘We Bought a Zoo’ is about.” Enjoy the rabbit hole.