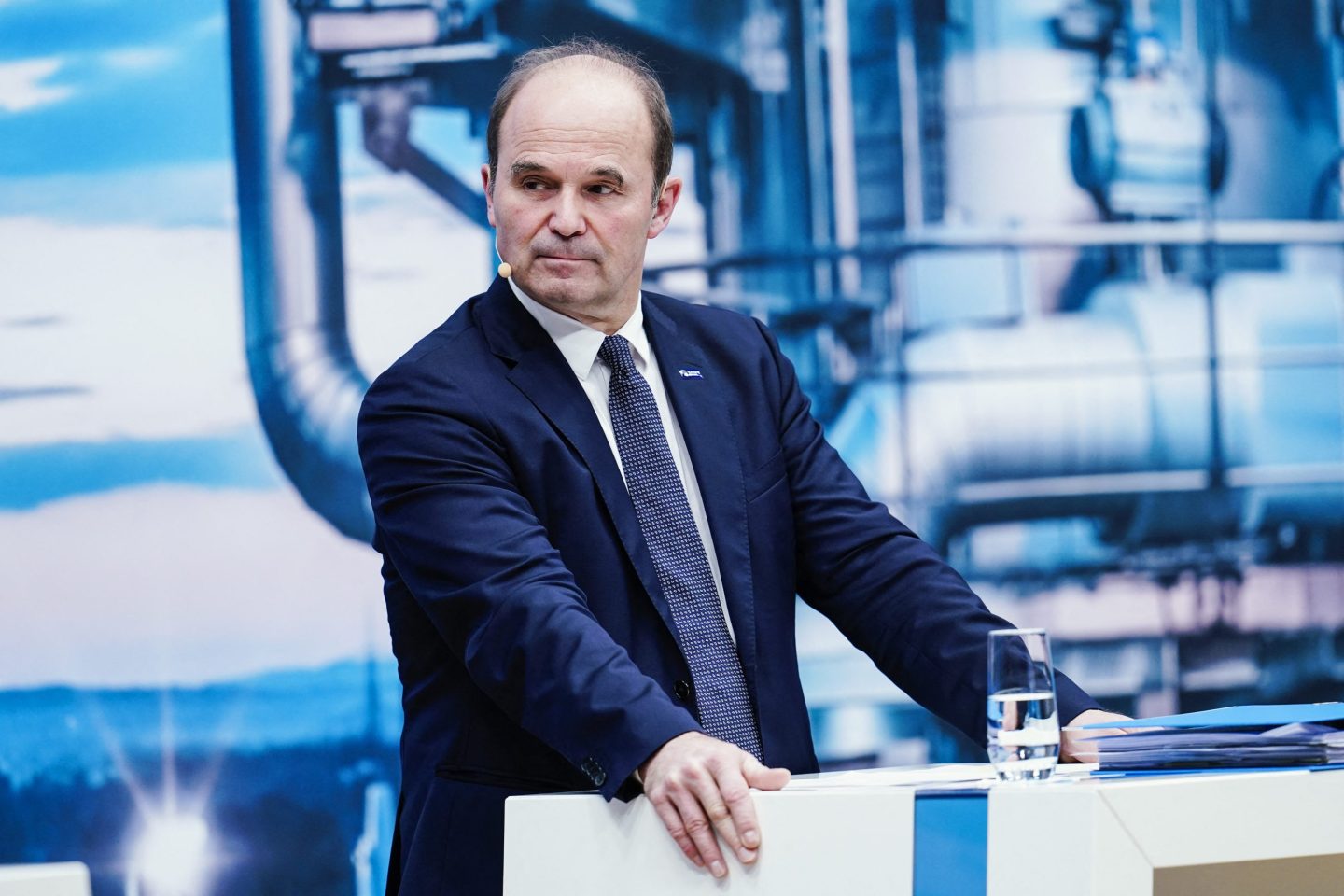 Vladimir Putin’s war in Ukraine revealed the folly of Europe’s heavy reliance on Russian natural gas, and no company is a greater testament to that overdependence than Germany’s BASF. Now the end of Russian gas flows—a consequence of the war in Ukraine—threatens the chemicals manufacturer’s position as a titan of German industry.

BASF, the world’s largest chemicals producer, this month announced heavy cost-cutting measures to deal with Moscow’s gas cutoff. If a cold winter forces Germany into gas rationing, BASF says it could also find itself having to shutter its flagship plant, which employs 39,000 people. And even if that doesn’t happen, analysts warn, high gas prices will likely still force the firm—and many of its regional peers—to close key operations next year, leaving European customers more reliant on American and Asian suppliers for chemicals used in everything from fertilizer and disinfectants to food and packaging.

BASF began life in 1865 as the Baden Aniline and Soda Factory and was already the global chemicals leader by 1900. For the company that earned $93 billion in revenue last year, gas isn’t just an energy source for powering its production, it’s also a key ingredient in the remarkable chain of production processes that takes place at the company’s sprawling flagship complex in the Rhineland city of Ludwigshafen.

There—and at a handful of smaller facilities around the world where the chemicals giant employs the same Verbund (“composite”) concept—BASF uses gas as both a power source and a raw material to make substances like ammonia, with by-products recycled and used to make other products, like carbon dioxide for the meat and drinks industries. The 3.8-square-mile Ludwigshafen complex uses about as much gas as Switzerland does.

BASF is more than a keen gas customer; it also owns most of Wintershall Dea, a gas and oil producer with extensive and ongoing Russian interests. (The rest of Wintershall Dea is owned by an investment vehicle of Russian oligarch and Putin backer Mikhail Fridman.) Although BASF says it has wound down its Russian and Belarusian business activities in response to the war, losing markets that accounted for around 1% of global sales, Wintershall Dea is still involved in three Russian onshore gas projects. Wintershall Dea was also a key financial backer of Gazprom’s now-stricken Nord Stream Russia-to-Germany gas pipelines.

Little wonder that BASF CEO Martin Brudermüller has been among Germany’s most vocal opponents of sanctions on Russian fossil fuels. Forgoing Russian oil and gas in the long term “could throw the German economy into its biggest crisis since the end of World War II,” he said in late March after the German government killed off the Nord Stream 2 pipeline project before it could go live, in response to Russia’s invasion of Ukraine. Since then, Russian oil and gas has become even more scarce: Europe has sanctioned Russian oil, and Gazprom stopped sending Germany gas through Nord Stream 1.

In preliminary quarterly results issued in mid-October, BASF said it expected to have earned €909 million ($895 million) in third-quarter net income—down 32% year on year, and well below analyst estimates of €1.1 billion for the quarter. That’s due to a partial write-down of Wintershall Dea’s Nord Stream stake.

With European gas prices skyrocketing in recent months—the company’s second-quarter results showed energy costs leaping more than 260% year on year—BASF also said it would slash annual costs in the region by €500 million. Its German operations, Ludwigshafen in particular, will bear the brunt of the cuts.

BASF’s industrial facilities in Ludwigshafen. The site is one of the largest industrial complexes in Germany.
Boris Roessler—Picture Alliance/Getty Images

“Wintershall Dea was a massive cash machine for BASF over the last decades, due to this cheap gas,” said Markus Mayer, head of research at Germany’s Baader Bank. “Due to this massive cash generation, they were able to invest more in downstream businesses.” Now, with the cash machine switched off, BASF has to try much harder to keep its costs down.

A BASF spokesperson declined to speculate as to whether these quarterly results will reflect the main impact from the Russia-Ukraine crisis, or whether worse is yet to come. But more trouble certainly lies over the horizon.

The most immediate problem is around continuous gas supplies to the Ludwigshafen Verbund. At the time of writing, Germany’s gas reserves are nearly 97% full, reflecting a massive effort by the government to prepare for a winter without Russian gas. BASF also says it has made “technical optimizations” to its production network and has “switched to alternative fuels such as oil where possible.”

But, if winter is particularly frigid, Germany could introduce some level of rationing. If that’s needed, homes and hospitals will get priority, with industry left out in the cold.

“If supply were to fall significantly and permanently below 50%, we would have to shut down the production site while maintaining the necessary safety standards,” the spokesperson said. “If production is significantly curtailed or discontinued, significant impacts on the basic supply of the population (not only in Germany) and thus on the community can be expected.”

‘This situation will remain’

According to Mayer, BASF’s warnings are unprecedented and show how deep its crisis is becoming. And he warns it is very likely that the Ludwigshafen complex is doomed regardless of rationing, since persistently high European gas prices reduce the competitiveness of BASF’s German products against rivals from the U.S. and Middle East.

“The problem is that, over the last two years, logistical costs have been so high that all markets have basically been regional markets,” Mayer said. “Now that logistical costs are down so much, all markets are open for imports. This is particularly the case for Europe. Cheaper products from outside Europe are now coming to Europe…Our expectation is that this situation will remain for the future.”

To combat those exorbitant European gas prices, BASF has already cut ammonia production at Ludwigshafen and another Verbund site in Antwerp, Belgium, and is now relying more on ammonia production in Freeport, Texas, where gas is much cheaper. Its complexes in the U.S., Malaysia, and China may help the company weather this crisis to an extent, but Mayer noted that it’s not just BASF that’s in trouble. “Energy-intensive businesses will partly or fully be closed down in Germany in particular,” he said, “but all across Europe there will be a capacity reduction.”

Mayer is not the first to predict potential doom for the German chemicals industry. Earlier this month, Gerald Haug—president of the German National Academy of Sciences Leopoldina—warned “entire lines of industry, especially in raw materials” could be lost. Haug’s proposed solution? A massive acceleration of the green transition to free Germany of dependence on gas for power purposes.

As it happens, BASF has for years been working on technology for creating hydrogen, which could substitute for gas as an energy source, if not an ingredient. In recent years, BASF has prioritized developing a technique called methane pyrolysis, which involves splitting methane—the chief component of natural gas—into hydrogen and solid carbon, which could then be used in steel and aluminum production, for example.

This push for so-called turquoise hydrogen made more sense when gas was cheap and plentiful, and BASF was itself profiting off gas extraction, but times have changed. Now, it is more urgently pursuing so-called green hydrogen, which is made by splitting water into hydrogen and oxygen, using renewable energy. The German government just gave BASF €134 million to build and install a giant electrolyzer for this purpose at Ludwigshafen. The aim is to see the system go live in 2025—assuming the site is still open by then.

BASF told Fortune that “methane pyrolysis remains a technology that has the potential to produce hydrogen with reduced CO2 emissions.”

The company will release its official quarterly results on Wednesday. Investors have already priced in BASF’s troubles, Mayer said, adding that it was unclear how management might be better navigating the turmoil. Already, BASF’s share price is 38% below its pre-invasion levels. However, the analyst indicated investors could retreat further.

BASF, like other German industrial titans, is about to benefit from massive gas subsidies from the government; each company will get an allotted amount of gas at artificially low prices, and what they don’t use themselves, they can sell at a profit. According to Mayer, the left-wing parties that dominate the governing coalition may demand cuts to “dividends and other variable compensation,” in exchange for essentially bailing the companies out in this way.

“BASF is seen as a dividend play,” he said. The chemicals giant’s future could look even gloomier if that dividend is no longer safe.