Netflix is rebounding from a disastrous first half of 2022. Why the coming months could turn out even better 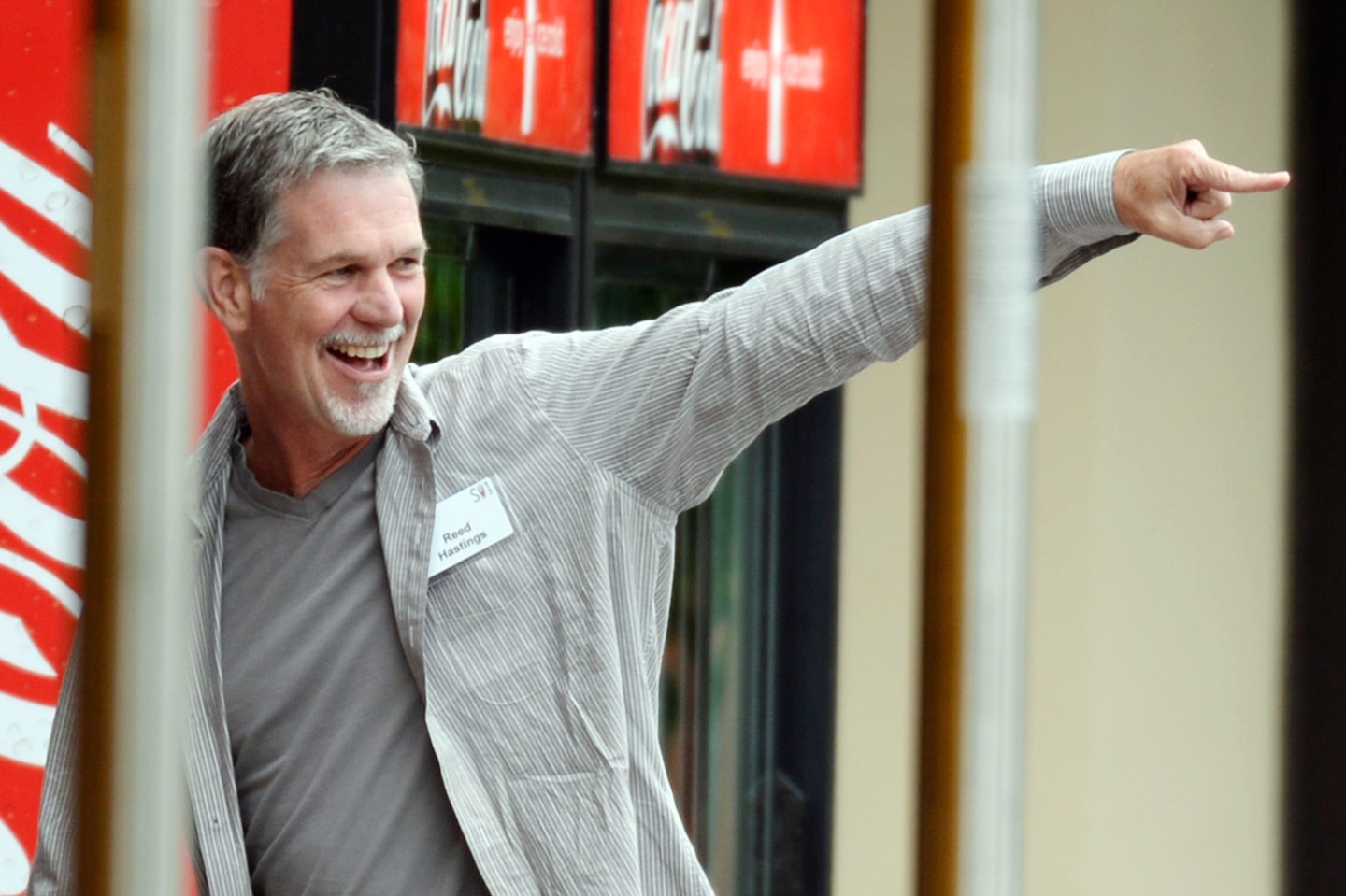 Happy Wednesday, y’all. It’s Jacob again, back in the Data Sheet saddle. My wedding season might be (thankfully) over, but earnings season is just beginning.

The results lured back some investors who had pushed Netflix’s stock down 60% year-to-date ahead of the streamer’s earnings report. Netflix shares jumped 14% in mid-day trading Wednesday.

Despite the mini-renaissance, Netflix officials spent relatively little time dwelling on the past three months. Instead, company leaders used the earnings report as an opportunity to reframe the conversation around the streaming industry—naturally, in a way that makes Netflix appear all-the-more appealing to Wall Street.

Netflix executives argued that the company remains best-positioned to capitalize on the shifting streaming landscape, which is poised to undergo seismic changes in the coming years. And while rivals like Disney chief Bob Chapek would likely chafe at such chatter, Netflix officials made a compelling case.

For example, Netflix leaders harped Wednesday on the importance of profitability, a metric that favors the standalone streaming giant.

While Netflix’s competitors all continue to lose billions of dollars each year on streaming—including Disney, Warner Bros. Discovery, Paramount, and NBCUniversal—Netflix officials are projecting about $4.5 billion in net income this year. In a letter to shareholders, Netflix executives noted that streaming rivals are raising prices, cutting spending, or exploring consolidation in response to investors’ “increased profit focus.”

While those changes shake out, Netflix can keep building its intellectual property library and investing in new innovations, like a lower-priced, ad-supported tier. (Netflix has also bumped up subscription prices and trimmed spending over the past two years, but those tweaks have been aimed at sustaining profit margins, as opposed to the need to reach profitability that’s movitivating Netflix’s rivals).

Netflix officials are also now trying to play down the importance of raw subscriber figures, arguing that the growing diversification of revenue sources in streaming renders the total less important. The third-quarter report marked the last time that Netflix will issue paid subscriber guidance.

While cynics might argue Netflix’s de-emphasis on subscriber figures is a response to the fallout from net subscriber losses in the prior two quarters, Netflix officials have a somewhat valid point. Netflix’s addition next month of an ad-supported tier could lead to $2.7 billion in ad-related revenue by 2025, according to MoffettNathanson analysts, while a looming crackdown on account sharing in 2023 will include a deeply discounted subscription offering.

“Now that we have such a wide range of price points, different partnerships all over the world, economic impact of any given subscriber can be quite different,” said Spencer Wang, Netflix’s vice president of finance, investor relations, and corporate development. “That’s particularly true if you’re trying to compare our business with other streaming services.”

Netflix chiefs also emphasized Wednesday the success of several buzzy television series and movies that debuted in succession in the third quarter, a reminder of the company’s unique ability to capture the pop culture zeitgeist. The list of hits included new seasons of Cobra Kai and Stranger Things, as well as the arrival of Monster: The Jeffrey Dahmer Story and The Sandman.

Netflix officials only took one direct shot at their competitors’ lack of similarly sizzling shows, highlighting the significantly higher prevalence of Google searches related to Dahmer compared to eye-wateringly expensive debuts of Amazon’s The Lord of the Rings: The Rings of Power and HBO Max’s House of the Dragon.

But data from Nielsen ratings underscores Netflix’s ability to consistently crank out blockbuster shows and movies, without the need to spend lavishly on big-budget projects.

To wit, at its current pace, Rings of Power should draw roughly 8 billion minutes viewed in the seven-week period between its debut and season finale—a pretty meager number given its property acquisition and production costs of $715 million, per the Wall Street Journal. Meanwhile, a fluffy piece of Netflix fare, the romantic drama Virgin River, scored 6.6 billion minutes viewed during a seven-week stretch—with a reported budget of $3 million to $5 million per episode. (Nielsen ratings only measure U.S.-based viewership.)

One robust quarter and an upbeat mid-term forecast might not completely change the outlook on Netflix, but you can’t blame company executives for trying.

Cancel the extra orders. Global smartphone shipments fell 9% in the prior quarter, dropping to the lowest total since 2014, as consumers put off purchases of consumer electronics, Bloomberg reported Tuesday. Data from market research firm Canalys suggests rising interest rates, global economic uncertainty, and China’s faltering economy contributed to the slowdown in smartphone sales. Smartphone shipments have fallen at least 9% year-over-year in each of the first three quarters of 2022.

On a scouting trip. Taiwan Semiconductor Manufacturing Co. is studying the feasibility of manufacturing advanced chips in Japan as part of its efforts to geographically diversify production, The Wall Street Journal reported Wednesday, citing sources familiar with the matter. The Taiwanese chip titan is already building a fabrication plant for less-advanced semiconductors in south Japan, and any future expansion likely would occur in the same location. TSMC officials are working to spread out manufacturing capacity in U.S.-allied countries amid the looming threat of China invading Taiwan, though company leaders have not decided whether to expand in Japan.

Telephoning its plans. Microsoft plans to build a mobile gaming platform and store that would compete with Apple and Google, The Verge reported Wednesday, citing records filed in a UK antitrust investigation. The Xbox parent said its mobile gaming store would include titles obtained through the company’s planned $68.7 billion purchase of game developer Activision Blizzard. The documents were included as part of a review targeting Microsoft’s acquisition of Activision Blizzard.

A Buckeye State blitz. The e-commerce boom has been an economic boon for residents of cities with willing workforces, ideal infrastructure, and convenient proximity. As Insider reported Wednesday, the trend has made Columbus, Ohio, into a mecca of warehouses, where locals and immigrants spend their days and nights filling online orders. While Columbus lacks the high-tech industries of its coastal counterparts, it boasts an ideal location for logistics operations and a large immigrant population that’s happy to earn hourly pay just above the minimum wage. However, the rampant construction of warehouses has drawn the ire of some native Ohioans, who grumble about the traffic and pollution, among other disruptions.

For some, the boom has brought opportunity, allowing refugees like Elabe to climb the economic ladder. He earns $18.25 an hour, nearly twice Ohio's minimum wage. Elabe's wife also works in a warehouse, fulfilling orders from the Macy's website. His family owns a car and rents a home north of Columbus. They send money to relatives.

But other residents say it has brought an industry to their doorstep that is doing more harm than good and costs more than it brings into the city. In Columbus, as in other cities around the US, warehouse detractors point to the strain the industry places on public services and question the tax breaks that politicians gave developers.

Bill Gates says high-income countries should foot the bill for climate change programs for the whole world, by Chris Morris

A long, cold winter is here for self-driving cars, by Alexei Oreskovic

Amazon Prime will screen the first Black Friday NFL game next year and plans to ‘treat it like a Super Bowl’, by Joe Reedy and the Associated Press

Desperate carmakers rush to semiconductor black market as U.S. crackdown on selling chips to China induces ‘another round of panic’, by Bloomberg

No place but home? Airbnb CEO and cofounder Brian Chesky has been a primary proponent of working from home, but he still harbors some concerns about remote arrangements. As Fortune’s Trey Williams reported Tuesday, Chesky told a crowd at the Lesbians Who Tech conference that he worries about the potential for loneliness among remote workers. Airbnb has fed into the demand for remote work, facilitating long-term rental stays for “digital nomads” choosing to spurn a fixed address. Chesky also has allowed all 6,000 Airbnb employees to work from anywhere, a change made permanent in April. Still, Chesky said he envisions “a future where you never leave your home and after COVID is over, the most dangerous thing will be loneliness,” according to a tweet from communications specialist Brooke Hammerling.