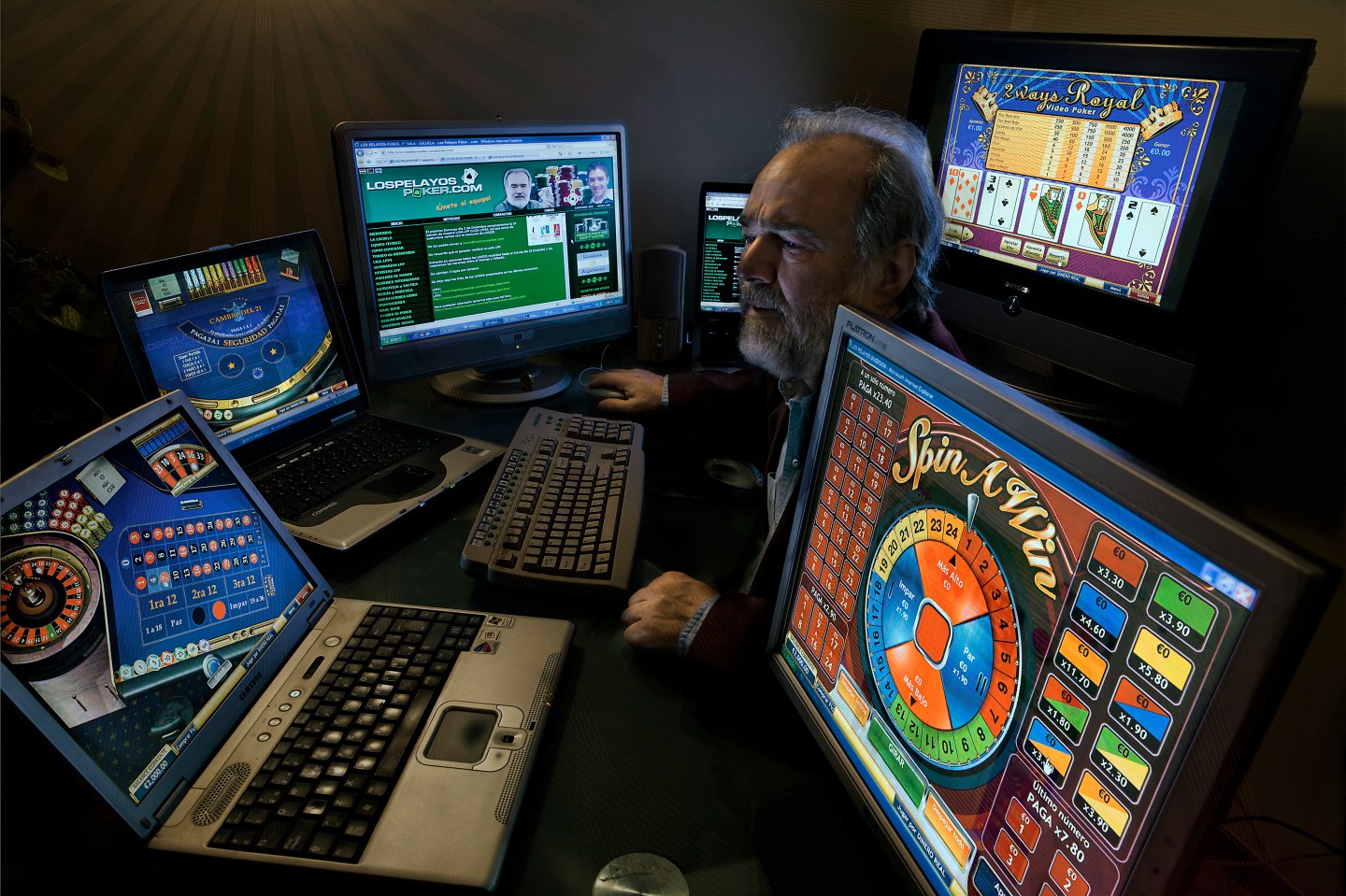 The creator economy is a modern marvel of democratization, a place where any individual can amass immense public influence, freed from the constraints of corporate or political gatekeepers.

But what if the most dynamic members of the creator class could collectively harness their power and use it to make Big Tech platforms better?

We got a glimpse of what that might look like on Amazon’s Twitch this week, when the live streaming platform announced plans for a partial ban on gambling-related streams. The episode offered a stark example of the sway that creators can wield over their co-dependent tech partners, who take a sizable cut of the ad and subscription revenue generated by online stars.

The Twitch sitch began Saturday, when modestly popular streamer Abraham “Sliker” Mohammed admitted that he had scammed his fellow creators out of about $200,000 to feed his gambling addiction.

The episode kicked off a discussion among top Twitch personalities about the platform’s embrace of gambling streams, which often involve viewers watching streamers bet cryptocurrencies as they play casino games. Twitch users spent 62.9 million hours watching slots and virtual casino channels in August, up from 33.1 million hours during the same month in 2021, according to TwitchTracker. Slots ranked as the 10th-most popular gaming channel on the platform this past week, while virtual casino ranked 26th.

Within a day, several high-profile Twitch stars used the Sliker affair to call on Twitch to ban gambling streams, arguing that they contribute to addiction and encourage the platform’s young viewers to gamble online.

Most importantly, two Twitch celebrities with a combined following of 11.3 million users—Imane “Pokimane” Anys and Matthew “Mizkif” Rinaudo—threatened to boycott the site during the high-traffic Christmas period unless the Amazon unit instituted new anti-gambling policies. The duo added that it planned to solicit more Twitch creators to join the cause.

On Tuesday, Twitch announced an updated gambling policy will take effect in mid-October. While the site’s leaders didn’t provide specific language, they said it will “prohibit streaming of gambling sites that include slots, roulette, or dice games that aren’t licensed either in the U.S. or other jurisdictions that provide sufficient consumer protection.” (Some Twitch personalities cheered the move, while others said the exception for licensed gambling sites amounts to a half-measure.)

Twitch officials haven’t said whether the policy commitment came in direct response to the threats of a streamer boycott. In a statement, Twitch said gambling content “has been a big topic of discussion in the community” and “something we’ve been actively reviewing.”

Nevertheless, the timing can’t be purely coincidental. The most logical scenario is that Twitch was on the fence about banning some gambling channels, and the mix of economic and reputational pressure from the creator hubbub pushed it to act.

To date, only a few coordinated protests against Big Tech platforms by their prized creators have surfaced. Most notably, a loose coalition of Black TikTok creators discussed a strike in mid-2021 to shine light on paltry compensation from the ByteDance division, but the New York Times reported that the episode was “more of a symbolic awareness campaign.”

The lack of organized advocacy isn’t necessarily surprising. The decentralized nature of the creator economy makes organizing efforts inherently difficult. Money-making creators also must be willing to surrender their platform and the income it generates for a common cause, a major sacrifice for stars whose lives are intertwined with their channels.

Yet the Twitch gambling campaign could embolden a new type of activism that has struggled to get off the ground.

With the right cause and a critical mass of influence, even a small number of social media personalities can leverage their enormous followings to exert pressure on Twitch, YouTube, TikTok, OnlyFans, and other digital platforms. As many Twitch users have noted, the site is ripe for boycotts on similar issues that have dogged the platform, including pornography, misogyny, and hate raids (when anonymous users bombard a channel with offensive messages).

Will such protests always succeed? Of course not. Will online influencers always promote well-founded causes and solutions? In all likelihood, no.

At least now, though, high-profile creators have a roadmap for putting their power to work.

Sucking up the competition? Federal Trade Commission regulators are investigating Amazon’s planned $1.7 billion purchase of Roomba maker iRobot, a deal that has led to concerns about potential privacy and antitrust issues, The Associated Press reported Tuesday. Amazon and iRobot independently disclosed that they have received requests from the FTC for additional information about the merger, an initial step taken by regulators scrutinizing large acquisitions. The FTC could sue to stop the deal, seek concessions from Amazon, or allow the purchase to proceed.

Trying to stay neutral. TikTok announced new policies Wednesday that tighten rules around political activity on the platform, part of the social media platform’s efforts to maintain an entertainment-driven atmosphere for users. The updated protocols mandate that U.S. governing bodies, politicians, and political parties must have their accounts verified by TikTok, a step that previously was optional. The ByteDance-owned unit also will ban campaign fundraising and monetization practices by political entities, building on an earlier prohibition against political advertising.

Making split decisions. YouTube creators posting highly viewed content on the site’s short-form video platform will receive 45% of ad revenue generated by the traffic under a policy announced Tuesday, the Washington Post reported. The revenue split is designed to entice creators who have gravitated toward primary competitor TikTok, where influencers are paid out of a fixed fund expected to total $1 billion through 2024. In a separate development, Amazon-owned Twitch announced a new revenue-sharing policy that will cut the amount of money distributed to streamers generating more than $100,000 in subscription payments over a 12-month period, The Verge reported.

Offering a better deal. The Indian government is sweetening its semiconductor manufacturing subsidy packages, offering to cover up to 50% of setup costs for companies willing to build chip plants in the country, Bloomberg reported Wednesday. The extra benefits are designed to make India less economically dependent on China and attract chip companies searching for alternatives to investing in China. Indian officials previously committed to subsidizing 30% to 50% of construction on semiconductor manufacturing facilities.

A $600 billion silver lining. Meta officials are straining awfully hard to spin the company’s recent doldrums in their favor. As Axios reported Wednesday, the Instagram and Facebook parent has argued on multiple occasions that its falling market cap—about $389 billion, down from roughly $1 trillion this time last year—illustrates that the company isn’t a monopoly deserving of an antitrust crackdown. Meta currently faces investigations or lawsuits filed by the Federal Trade Commission, state attorneys general, and European Union regulators, each of whom is alleging some form of anti-competitive behavior by company officials.

In addition to highlighting its struggles to compete with TikTok on Capitol Hill and in earnings reports, Meta has blamed Apple's App Tracking Transparency feature, which lets iPhone users opt out of tracking for targeted advertising, for billions of dollars of lost digital advertising revenue.

Yes, but: Despite taking some major hits, Meta has 2.9 billion monthly active users and had net income of $6.7 billion on $29 billion revenue last quarter. It's still buying other companies. Its global influence over information and advertising remains vast.

Inside the Ethereum merge: Behind the scenes of the historic event, according to the people who made it possible, by Taylor Locke

Elon Musk is getting ready to unleash an army of humanoid robots. Here’s what he wants to use them for, by Prarthana Prakash

Elon Musk wants his Starlink to be exempt from Iranian sanctions to provide internet amid protests over a woman’s death, by Christiaan Hetzner

How to use A.I. responsibly: lessons from DeepMind and Intel, by Jeremy Kahn

Mark Zuckerberg’s wealth has nosedived by $70 billion this year. Here’s where he ranks on the list of the world’s richest people, by Alena Botros

What the cluck? As if this really needed to be said: don’t cook chicken in NyQuil. Apparently it’s a necessary reminder after a social media challenge emerged encouraging viewers to simmer some poultry in the liquid medicine, CNN reported Tuesday. The TikTok-driven trend prompted the Food and Drug Administration to issue a warning about the dangers of the culinary concoction. Federal officials noted, too, that boiling NyQuil and similar over-the-counter liquids can produce vapors that damage your lungs. As the FDA wrote: “The challenge sounds silly and unappetizing — and it is. But it could also be very unsafe.” Oh for the days of simpler challenges, like dumping ice water on your head.