States aren’t waiting for the federal government to regulate Big Tech. Are consumers winning or losing? 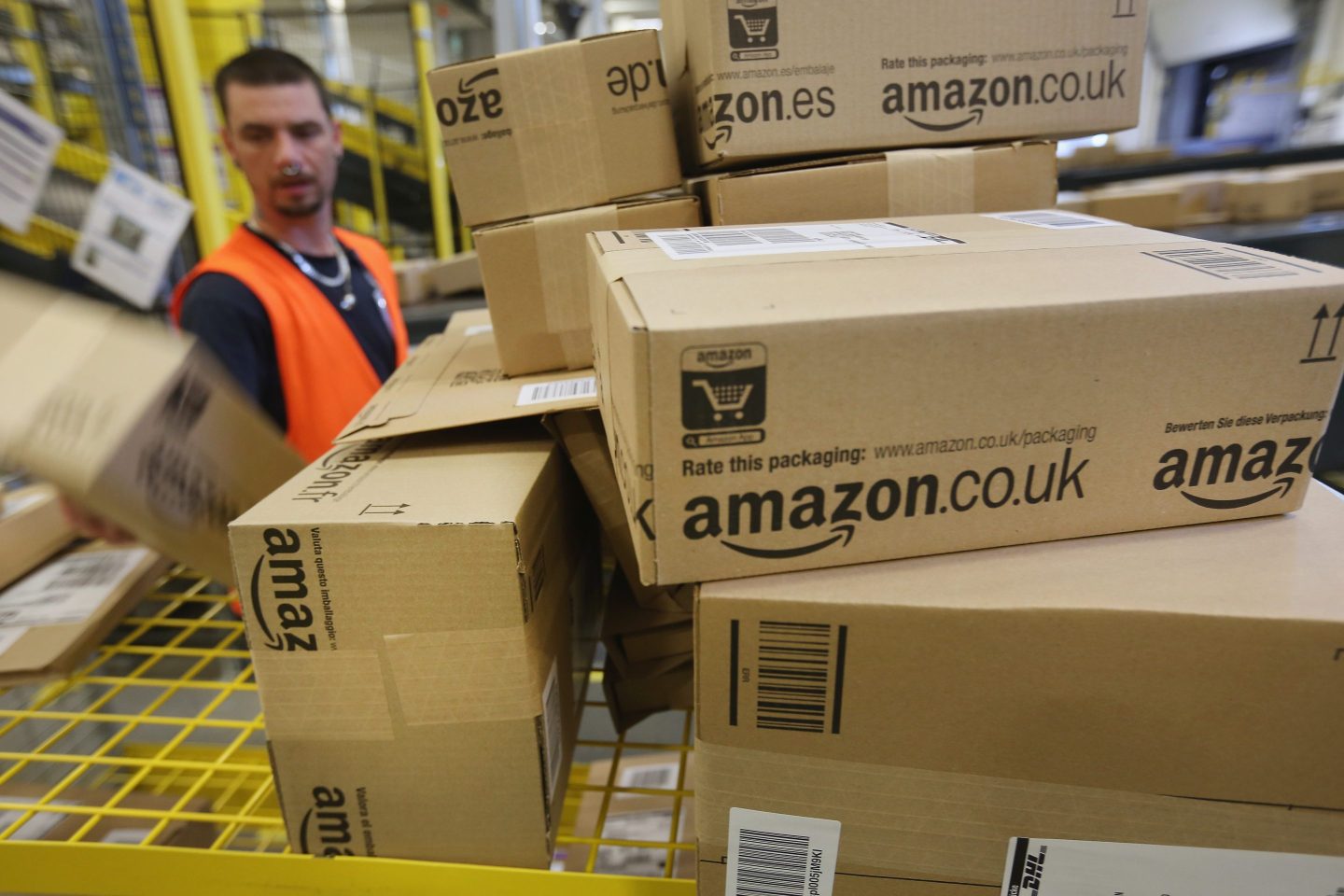 California Attorney General Rob Bonta sued Amazon on antitrust grounds Wednesday, arguing that the e-commerce titan uses its power to keep third-party sellers off competing marketplaces and punishes those who stray from the company’s platform. The lawsuit, the Wall Street Journal reported, “represents the biggest legal challenge to date in the U.S. for Amazon.”

Nearly 2,500 miles to the east, executives from TikTok, Meta, YouTube, and Twitter dodged questions Wednesday from U.S. senators about the inner workings of social media platforms. The hearing, Bloomberg’s Alex Barinka opined, “ended without a clear focus or takeaway.”

Yet several developments, including a few recent episodes, show that this split has produced a mixed bag of results. While some state leaders have made much needed progress in protecting people’s privacy and creating a fairer tech ecosystem, others have seized the power vacuum to push partisan and ill-conceived policies that stunt progress on federal laws.

In the absence of strong federal leadership on antitrust matters, many state attorneys general have brought worthwhile cases against industry giants.

Take a 2020 lawsuit filed against Google by 16 states and Puerto Rico, led by Texas Attorney General Ken Paxton. The state legal officials argue that Google deploys its online advertising technology in monopolistic ways, using it to manipulate the outcome of ad-placement auctions and inflate ad prices.

In an important ruling Tuesday, a federal judge in New York found that the states have plausibly alleged several claims of anticompetitive behavior by Google (the judge also threw out multiple claims, including a high-profile allegation that Google and Facebook made an illegal pact commonly known as “Jedi Blue”). While jurors ultimately should decide whether Google engaged in illegal conduct, the judge’s decision validates the intent of an important lawsuit.

States also have taken a lead on the data privacy front in legislative chambers and courtrooms, taking on an industry that has profited off consumer information with minimal federal oversight.

In the past two years, four states (Colorado, Connecticut, Virginia, and Utah) have passed comprehensive consumer data laws designed to curb the collection and sale of mass amounts of user information, joining early pioneer California. In addition, at least four states and the District of Columbia are suing Google over its location-tracking practices. None of the cases has reached a jury, but judges in Arizona and Washington have denied Google’s request to dismiss lawsuits in those states.

At the same time, however, state legislatures freed from the partisan gridlock of Congress have shepherded bills that range from well-intentioned but poorly written to blatantly unconstitutional.

In California, state legislators passed a bill in late August that aims to bolster child safety and privacy on digital platforms. The bill includes several worthwhile pieces, such as mandates to evaluate the potential harm of new products to kids and limits on collecting teens’ user data. Yet as tech industry and California business associations fairly argued, the bill contains some overly broad and onerous requirements. For example, the bill applies to all platforms “likely to be accessed by children,” not just the social media companies most often scrutinized for contributing to minors’ mental health issues.

On the other end of the political spectrum, Florida’s Republican legislature passed the Stop Social Media Censorship Act last year amid national squabbles over tech companies’ content moderation decisions. But as expected, federal district and appellate courts quickly swept aside the primary provisions of the law, including statutes that penalize digital platforms for removing certain political speech, as violations of companies’ free-speech rights.

Ultimately, the patchwork of state laws has held back some federal efforts to adopt uniform laws that would simplify the regulatory landscape. The most glaring example involves ongoing debates over a federal privacy bill that boasts strong bipartisan support but faces resistance from House Speaker Nancy Pelosi and Senate Commerce Chair Maria Cantwell (D-Wash.), whose committee can block the legislation. Both legislators have argued that the bill would override stronger state privacy protections.

It’s finally here. The long-awaited Ethereum merge finished Thursday, ending a yearslong effort designed to make the blockchain more energy efficient and prepared for additional updates. The shift from proof-of-work to proof-of-stake protocols is expected to cut carbon emissions tied to Ethereum mining by about 99%, addressing a key criticism of the blockchain. Future upgrades are expected to make the Ethereum cryptocurrency easier to withdraw and faster to use.

Giving a fig. Adobe announced plans Thursday to acquire software design company Figma in a deal valued at $20 billion, Bloomberg reported. The purchase, which would rank as the largest takeover of a private software company, comes as Adobe faces questions from Wall Street about the long-term prospects of its signature suite of design products. Figma allows users to collaborate on building software, a tool that gained popularity amid the shift to remote work. Adobe shares fell 17% in midday trading Thursday.

Taking a lengthy look. European Union and U.K. regulators are expected to conduct in-depth antitrust investigations into Microsoft’s planned $68.7 billion acquisition of video game developer Activision Blizzard, the Financial Times reported, citing sources familiar with the matter. U.K. officials confirmed they have launched a full inquiry into the deal after Microsoft rejected regulators’ initial demands designed to ensure adequate competition in the video game market. EU regulators haven’t announced a formal investigation, but the Times reported that officials involved in the deal expect confirmation of an extensive review will arrive in the coming weeks.

But what does it mean? Twilio CEO Jeff Lawson told employees that the digital communications company conducted layoffs Wednesday through an “anti-racist/anti-oppression lens,” a rare proclamation for a major tech company. Lawson did not provide any details specifying the company’s actions in relation to anti-racism ideals. Some research has found layoffs can disproportionately result in job losses for women and non-white employees, though basing employment decisions on race often leads to legal challenges and criticism from affirmative action opponents.

Interested in incentives. Tesla wants some of that battery tax-credit money. The Wall Street Journal reported Wednesday that the electric-auto maker, lured by the promise of American subsidies included in the Inflation Reduction Act, is reevaluating plans to manufacture vehicle batteries in Germany. The bill, signed into law by President Joe Biden last month, includes tax credits that could cover a sizable chunk of the cost to produce electric vehicle batteries. However, beneficiaries must manufacture the batteries on American soil, a provision that has drawn condemnation from some European and Asian allies.

Tesla and one of its cell suppliers, Panasonic Holdings Corp., share a Nevada battery factory and are likely to be among the biggest early beneficiaries of those battery production incentives, analysts said.

Tesla also has been trying its hand at manufacturing cells in-house, an effort designed to reduce the cost of a key component and mitigate the risk of battery shortages. The company has been producing those new, larger cells at a pilot facility in Fremont, Calif., and had been planning to do so at its factories in the Austin area and outside of Berlin.

Elon Musk is getting detailed weekly reports on Tesla staff who don’t turn up to work in the office, by Chloe Taylor

As economic turbulence looms, Forrester recommends companies rein in tech spending. But not on A.I., by Jeremy Kahn

Musk, Gates, and the late Steve Jobs all have one personality trait in common, by Alice Hearing

Climate change and the energy crisis are powering the comeback of a 1970s technology now being installed in 40% of new U.S. homes, by David Meyer

Crossing security lines? Customs officials are rummaging through much more than luggage these days. The Washington Post reported Thursday that Customs and Border Protection staffers are downloading and storing extensive data from thousands of cell phones, tablets, and computers seized from travelers each year. The Post, citing a letter sent by Sen. Ron Wyden (D-Ore.), reported that roughly 3,000 agency staffers have access to a database containing extensive information on individuals singled out for intensive searches. CBP officials said the searches (which are legal) and database help screen travelers deemed significant law enforcement, national security, or counterterrorism concerns. However, CBP leaders refused to release information detailing the extent of data seizures and retention practices. Wyden and civil liberties advocates argued the agency’s actions might amount to unnecessary privacy violations.