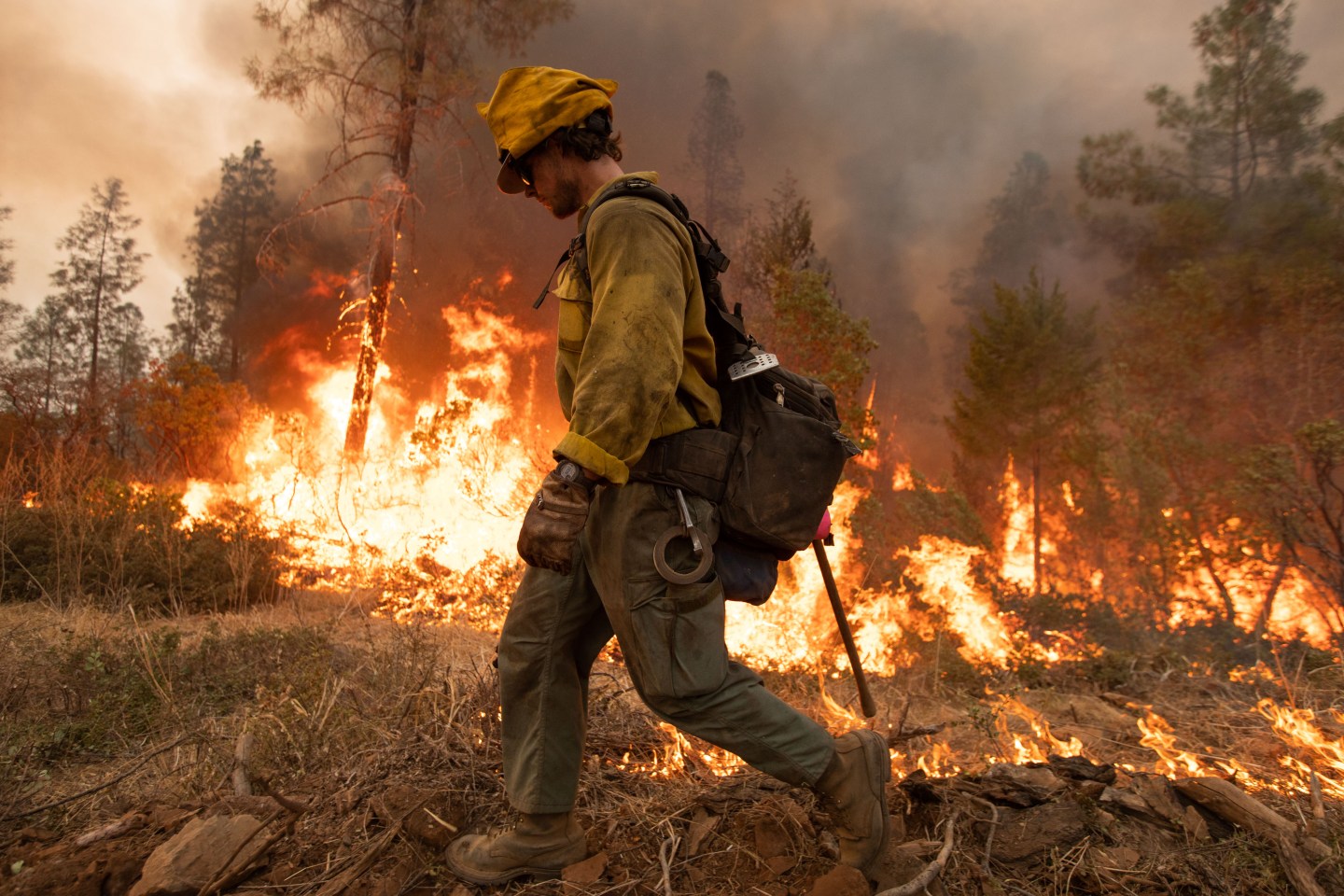 There is a growing mismatch between policies and what the world actually needs to do about climate change, the UN warns.
Benjamin Fanjoy—Bloomberg/Getty Images

The world’s efforts to slow climate change are failing to match the reality of the situation, a new report from the United Nations warns.

It’s been yet another summer of climate chaos around the world, from scorching heat waves and droughts causing factory shutdowns in China to devastating floods in Pakistan, as experts warn that it is now or never for countries to take action.

But to avoid the worst effects of climate change, there is a growing disconnect between what countries should be doing and what is actually happening, according to a report by the UN’s World Meteorological Organization published on Tuesday.

Countries’ targets to reduce their planet-warming emissions over the next decade must be four times as high in order to keep global temperature rise under 2°C, the upper limit of warming targeted in the 2015 Paris Agreement. Targets would need to be seven times as great for the world to meet the primary goal established in 2015 to keep warming below 1.5°C according to the report.

“This year’s report shows that we are still way off track.”

The report outlined several instances of disastrous climate impacts this year, including droughts hitting large parts of China and the U.S., and extreme storms causing flooding across Central Asia.

But the report also warned that there is likely much worse to come in the next decade and beyond if national policies are not ramped up to match what the climate crisis requires.

The report found that mean temperatures for the next five years are virtually assured to be hotter than the previous five, while there is a nearly 50% chance that global temperatures will temporarily surpass the 1.5°C mark for the first time before 2027, with the odds growing every year.

The worst effects of hotter temperatures will be felt in cities, the report found, where more than 1.6 billion people will have to endure at least three months a year of temperatures averaging above 35°C (95°F) by 2050. Heat waves like these are expected to become much more common in places unaccustomed to such weather, as happened this summer when scorching temperatures in the U.K. caused airport tarmacs to melt.

The report also found that current policies are insufficient to ensure that the world won’t trigger a so-called climate tipping point, when warming temperatures begin creating self-perpetuating and irreversible shifts in the global climate.

Tipping points include the collapse of massive ice sheets leading to even faster rates of sea level rise, or the drying of the Amazon rain forest, resulting in the loss of one of the world’s most efficient natural absorbers of atmospheric carbon. Some of these tipping points may come significantly sooner than once thought, as a recent study found that five tipping points could conceivably fall with current levels of warming, followed by six more once the world hits 1.5°C of warming.

The report found that while recent climate policies have helped slow the rate of greenhouse gas emissions, they still fall short of avoiding the worst effects of climate change. With current policies, the world will likely hit 2.8°C of warming by 2100. Should current pledges be implemented into policy, warming could be curbed to 2.5°C.

With climate impacts set to become more severe with each passing year, the UN doubled down on its calls to increase funding to help build resilience against the more disastrous effects of warming, primarily through a new early warning system being developed by the World Meteorological Organization (WMO) that would create more efficient risk management systems.

“The report is a shameful reminder that resilience-building is the neglected half of the climate equation,” Guterres said. “It is a scandal that developed countries have failed to take adaptation seriously, and shrugged off their commitments to help the developing world.”

“This is a moral imperative, but it is also a matter of common sense,” Guterres said, referring to the human dividends of helping vulnerable countries cope with climate change.

Guterres also pledged to develop an “early warnings” system to guard against extreme weather that would be available worldwide within five years. The WMO will be spearheading the development of this system, which the UN called a “quick and cost-efficient” way to help save lives and reduce losses while more funding is mobilized.

“Climate science is increasingly able to show that many of the extreme weather events that we are experiencing have become more likely and more intense due to human-induced climate change,” WMO Secretary-General Petteri Taalas said in a statement.

“It is more important than ever that we scale up action on early warning systems to build resilience to current and future climate risks in vulnerable communities.”