Why Joe Biden’s last-minute tech reform push is too little, too late 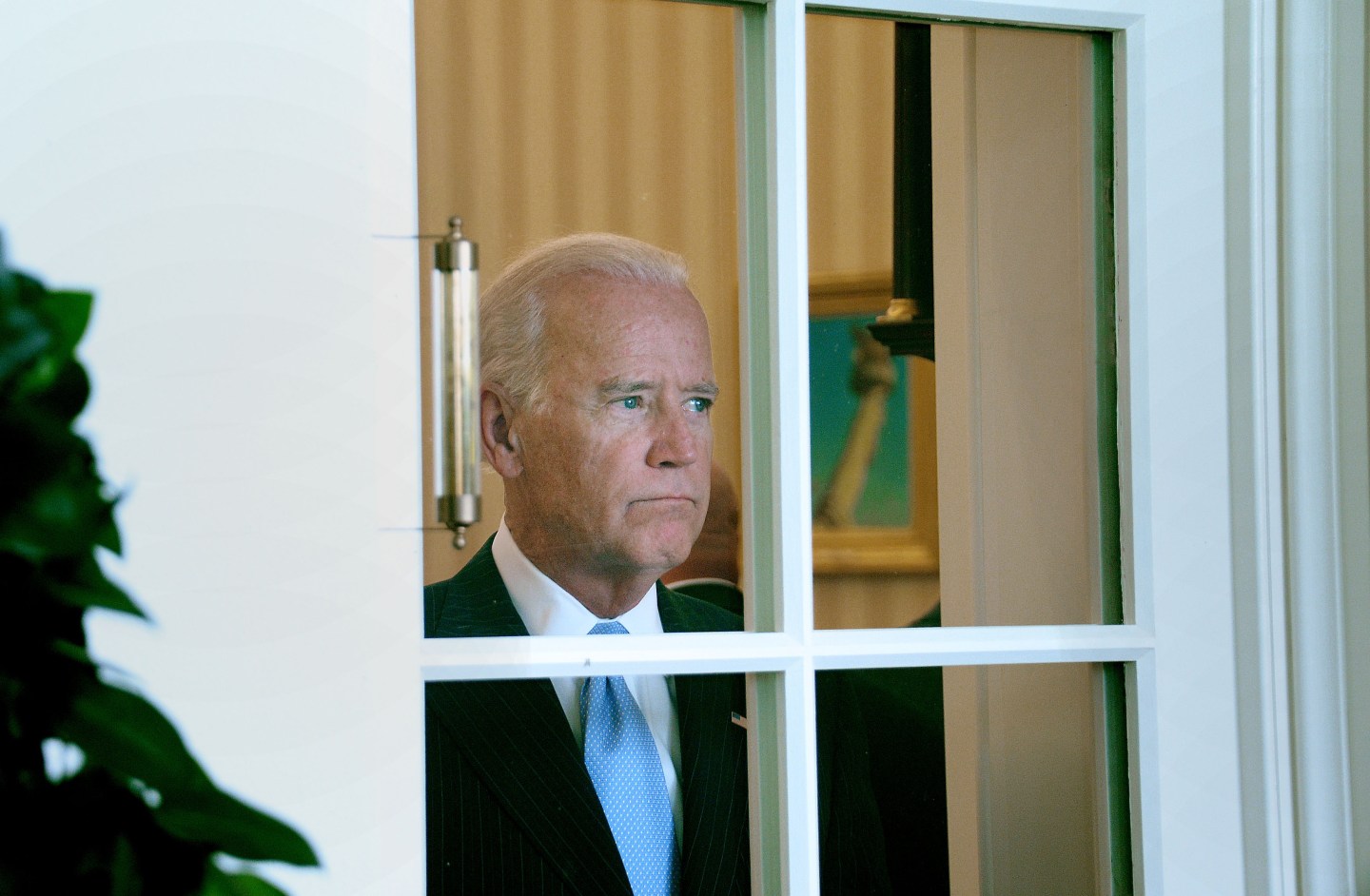 Judging by his eleventh-hour push for several reforms, he’ll likely end his first half-term still searching for a solitary victory.

Biden used a gathering of industry critics Thursday to advocate for legislation that, with maybe one faint exception, has essentially no chance of passing this year. More often than not, the 46th president issued pleasing platitudes that lacked specificity, offered no insight into ongoing political machinations, and ignored the complexities of tech regulation.

The event, which did not feature any representatives from Big Tech companies, reinforced the challenges encountered by Democrats and some Republicans in their quest to chip away at Silicon Valley’s enormous power over American lives.

While Biden and his Democratic counterparts controlling Congress have come closer to passing tech-related legislation than any of their predecessors from the past two decades, they haven’t been able to overcome an evenly divided Senate and virtually split House. The challenge could become even greater if, as multiple polls predict, Republicans reclaim the majority in the House following November’s midterm elections.

Democrats still have a tight three-month window of guaranteed control over the legislative and executive branches, so Biden trotted out six proposals—each of which are included in bills pending before Congress—he wants enacted during his tenure. (The event also made for good campaign politics.)

The only reform with a realistic chance of passage took top billing on Biden’s agenda: promoting competition in the technology sector. Its placement reflected the fading but still flickering hopes that Congress could squeeze through the American Innovation and Choice Online Act, which would stop large tech firms from favoring their own products on company platforms, among other provisions. The bill, for example, could force Google to redesign its Maps tool and make Amazon downplay its private label Basics on its e-commerce platform.

Yet Biden offered nothing Thursday to suggest he’s any closer to breaking a logjam in the Senate, where Majority Leader Chuck Schumer has dithered on bringing the bill forward.

Schumer said in early August that he planned to hold a floor vote, according to Politico. But Bloomberg reported in late August that he told a group of private donors that the legislation lacked the 60 votes needed to pass. The bill’s cosponsors, Senators Amy Klobuchar (D-Minn.) and Chuck Grassley (R-Iowa), have previously claimed they have the necessary votes. Klobuchar said earlier this week that the bill remains alive—“Never count us out when the cause is right and it’s something we need to tackle,” she told Kara Swisher at Code Conference—but her comments inspired little confidence.

Biden similarly gave no hint that he’s anywhere close to solving intraparty fractures over his second and third priorities: providing “robust federal protections for Americans’ privacy” and “putting in place even stronger privacy and online protections” for children.

The American Data Privacy and Protection Act, which would limit the collection and sale of online user data and regulate targeted advertising aimed at minors, breezed through a House committee with bipartisan support in July. But House Speaker Nancy Pelosi issued a statement last week criticizing the bill for overriding stronger privacy regulations enacted by states (including her home of California). Sen. Maria Cantwell (D-Wash.), whose committee controls the fate of the bill in the upper chamber, also has faulted the bill as too weak.

The rest of Biden’s agenda reads like a vague wish list best suited for the campaign trail.

The president once again called for changes to Section 230, a statute that protects online platforms from legal liability tied to content published on their sites. Yet his administration has made no progress on this front in nearly two years, likely a reflection of partisan splits over solutions. (Democrats aim to hold Big Tech responsible for distasteful content posted on their platforms, while Republicans want to punish tech companies for censoring speech.)

Biden also called for increased transparency surrounding algorithms and content moderation decisions, as well as an end to discriminatory algorithm decision-making. However, multiple media reports have illustrated that such goals run into the reality of Big Tech’s sprawling algorithms, which are powered by ever-changing A.I. technology that cannot be easily regulated. (The European Union plans to try, but we’ll see how well that goes.)

Democrats have earned some credit for finally bringing forward comprehensive tech legislation—with some bipartisan backing to boot. Yet with the clock ticking on their control over Congress, it’s clearer than ever that they’re poised to go home empty-handed.

Definitely not hush money. Twitter and its former head of security, Peiter “Mudge” Zatko, reached a $7 million employment settlement days before he filed a whistleblower complaint alleging major security lapses at the company, the Wall Street Journal reported Thursday. The confidential agreement followed months of negotiations between the two sides over potential lost pay tied to Zatko’s departure. Twitter officials have said they fired Zatko for “ineffective leadership and poor performance,” while the longtime cybersecurity leader has countered that he was pushed out while voicing concerns about the company’s security and privacy issues.

Hungry for power. Cryptocurrency mining accounts for an estimated 0.9% to 1.7% of annual energy consumption in the U.S., an amount that could warrant legislation aimed at curtailing mining operations, according to a White House report released Thursday. The estimate adds to mounting criticism of the energy-intensive proof-of-work mechanism that underpins Bitcoin and Ethereum mining. Etherum is expected to switch this month to a different mining mechanism that uses 99% less energy, though no such plans are in place for Bitcoin.

All talk, no action. SpaceX CEO Elon Musk said his company had “promising conversations” with Apple about the iPhone maker’s new satellite connectivity technology, though the two sides haven’t announced any business agreements, Bloomberg reported Thursday. Apple announced Wednesday that the latest version of the iPhone includes an emergency services feature that allows users in remote areas to send requests for help via satellite. Apple is partnering with Globalstar to connect and build out the satellite infrastructure needed to power the technology, the two sides said Wednesday.

An irresponsible move? Meta has disbanded a group of about 25 employees that focused on limiting the negative consequences of the Facebook and Instagram parent’s products, the Wall Street Journal reported Thursday. The Responsible Innovation team, composed of engineers, ethicists, and other staffers, spent the past several years coordinating with colleagues and external partners to mitigate potential harms caused by the company’s media platforms. A Meta spokesperson told the Journal that resources dedicated to safe and ethical design would be more closely tied to individual teams.

Consider this a warning. Apple could find itself up the proverbial river with Congress if it does business with Yangtze Memory Technologies Co. Republican lawmakers threatened Thursday to intensely scrutinize Apple if the tech giant uses semiconductors from the state-run Chinese company in iPhones sold to U.S. customers, the Financial Times reported. Apple officials said they have not used chips from YMTC, but they are “evaluating sourcing” from the firm for semiconductors to be used in iPhones sold in China. U.S. officials have scrutinized YMTC in recent months amid allegations that the company, which is partially owned by the Chinese government, has violated export control laws.

In July, a bipartisan group of senators—including Schumer and Mark Warner, the Democratic chair of the Senate intelligence committee—urged the Biden administration to put YMTC on a commerce department blacklist that would effectively bar U.S. companies from providing technology to the Chinese group.

The senators, who included James Risch, the top Republican on the foreign relations committee, said YMTC should be put on the “entity list” as it was violating export control rules by selling memory chips to Huawei.

The lawmakers also accused Beijing of subsidizing YMTC in ways that would help put the “national champion” on track to dominate the sector by selling chips below cost, as China has done in other areas such as the solar industry.

Tech and finance moguls are putting money and weight behind ‘Trump with a brain’ Ron DeSantis, by Anne Sraders

Amazon’s CEO has no plans to order corporate staff back to the office—and he says paying $25 an hour to rank-and-file workers is too high, by Colin Lodewick

What happens if Bitcoin falls below $10,000?, by Jeff John Roberts

America is witnessing the birth of a new industrial policy. Here’s how to make sure it benefits workers and entrepreneurs across the country, not just a handful of superstar urban regions, by Xavier de Souza Briggs and Mark Muro

She’d be so confused. Long live the queen on blockchain. The death of 96-year-old Queen Elizabeth II set off a mad Web3 rush Thursday to hawk cryptocurrencies and non-fungible tokens in the deceased monarch’s name, Fortune’s Sophie Mellor reported. Dozens of crypto tokens linked to Her Majesty—including Queen Elizabeth Inu, QueenDoge, and London Bridge Is Down—were launched within hours of Buckingham Palace announcing her passing. Meanwhile, leading NFT exchange OpenSea was flooded with digital photographs, artwork, and other assets that capitalized on her image. Critics of Web3’s capitalist impulse lambasted the community for failing to emulate the queen’s grace, while others noted that the crypto tokens were ripe for pump-and-dump schemes.