Spain declares that ‘only yes means yes,’ thanks to its 34-year-old equality minister 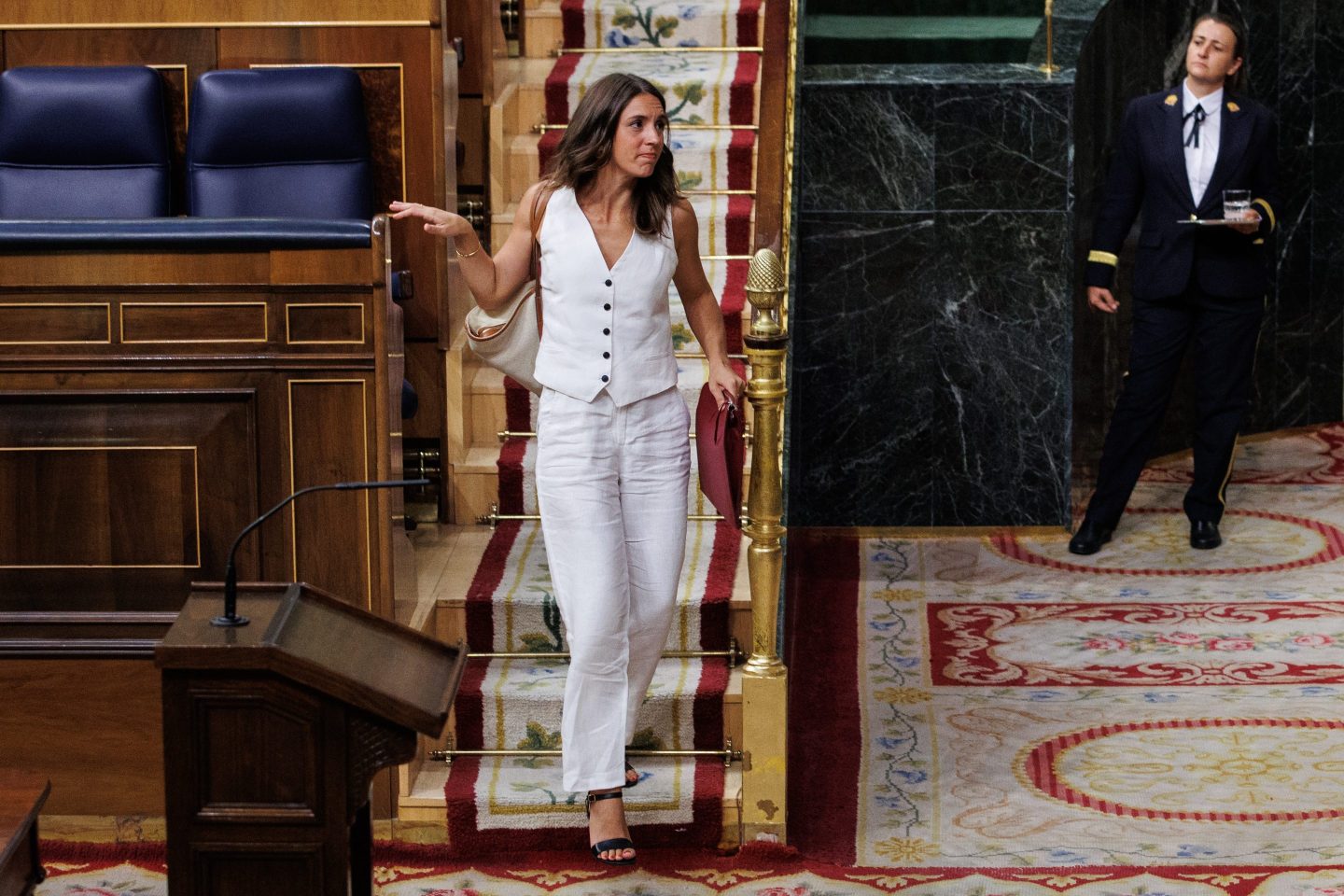 Good morning, Broadsheet readers! The head of F1 thinks it would take a meteor to get a woman on that race track, Nasdaq has competing interests when it comes to climate change disclosures, and only yes means yes in Spain. Have a restful weekend.

– Yes means yes. In Spain, it’s now law that “only yes means yes.” The country’s congress yesterday passed legislation declaring that consent for sexual activity must be affirmative; silence or lack of objection is not enough.

The legislation stems from a horrific tragedy. In 2016, five men raped an 18-year-old at Pamplona’s bull-running festival. During the men’s trial, their attorney argued that a video of the victim—in which her eyes were closed and she was immobile—was proof of consent.

Originally, the five attackers in the “wolf pack” case were convicted of sexual abuse, a lesser charge than rape, because they didn’t use another form of physical violence during the assault. In addition to redefining consent, the new law makes clear that lack of consent, not dramatic violence, is the defining factor in a charge of rape.

Thirty-four-year-old Spanish equality minister Irene Montero was a driving force behind the legislation. “It’s a victorious day after many years of struggle,” she told the Guardian. “From now on no woman will have to prove that violence or intimidation was used for it to be recognized for what it is.”

Montero’s Equality Ministry has been particularly active lately. The branch earlier this summer debuted an ad campaign urging Spanish women to visit the beach with the tagline “all bodies are beach bodies”—although that campaign faced backlash for doctoring images and featuring some women without their permission. The ministry helped push through landmark legislation on transgender rights in Spain about a year ago and helped increase paternity leave for new fathers to 16 weeks.

Of all these efforts, this week’s legislation may be among the most impactful yet. The victim of the 2016 attack remains anonymous, but her mother shared a statement: “This law is the result of the bravery, perseverance and dignity of a girl who knew how she wanted to live without being judged by anyone.”

- Russian exit. Citigroup, led by CEO Jane Fraser, will "wind down" its business in Russia. The bank had attempted to sell its Russian business but the country's war against Ukraine complicated those efforts. The bank expects to incur about $170 million in costs from the process. Wall Street Journal

- Good news, bad news. The Securities and Exchange Commission has put forward a proposal that would require companies to disclose details about their greenhouse gas emissions and impact on the environment. The proposal should be good news for Nasdaq's ESG unit, which advises businesses on such policies. But the exchange, led by CEO Adena Friedman, is lobbying to dilute the SEC's proposal, worried that a requirement would hurt its listings business. Financial Times

- Meteor watch. Formula One Group head Stefano Domenicali says he thinks it's unlikely a woman will race an F1 car in the next five years—unless a "meteorite" hits the Earth. Only two women have ever competed at the Grand Prix level. Domenicali's exact comment was: "Unless there is something like a meteorite, I don’t see a girl coming into F1." Washington Post

- Appeal is allowed. New York chief judge of the court of appeals Janet DiFiore will allow Harvey Weinstein to appeal the 2020 sex crimes conviction that sentenced him to more than 20 years in prison. Weinstein says the appeal will "prove [his] innocence." CNN

- Significant damages. A jury awarded Vanessa Bryant $16 million over graphic photos taken of the plane crash that killed her husband, Kobe Bryant, and daughter Gianna. The jury found that the Los Angeles County Sheriff’s and Fire department deputies who took and shared the gruesome photos infringed on the privacy of surviving relatives. CNN

- Tennis Titan. Before Serena Williams, there was Althea Gibson. The first Black player to win Wimbledon and the first Black woman to rank No. 1 in tennis, Gibson battled racism in the sport and, despite her achievements, was often overlooked in the decades that followed. Now a block on 143rd street in Harlem, New York, where Gibson grew up, is being named in her honor. New York Times

- State investigates. California's Civil Rights Department will investigate discrimination claims at Pinterest brought forward by Ifeoma Ozoma and other whistleblowers. The department has contacted several women as potential witnesses in the investigation. "Our discussions with the CCRD are ongoing and we remain committed to reviewing and evolving our people practices to best support our employees," Pinterest said in a statement. Protocol

Why I'll never forget having my period in prison CNN

"If I’ve learned anything over the last decade, it is that there is nothing more powerful than an army of angry mothers."